Hidden Underpinnings: What Vintage Lingerie Tells Us About History 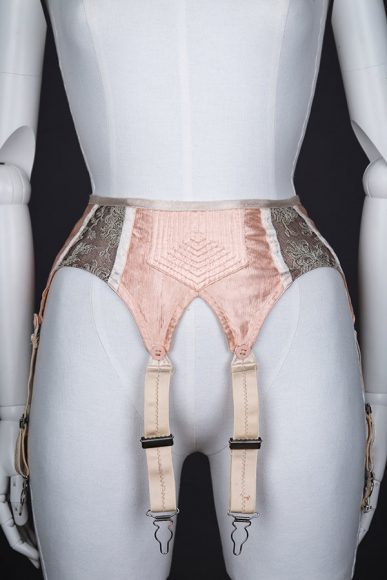 I’ve been in the lingerie for around five years now; it’s not long in the grand scheme of things, but it means that I have seen A LOT of lingerie. As time’s gone by, I’ve found myself getting less and less excited by contemporary design.  Capitalism demands that garments ultimately sell, so designers naturally face certain limitations in the materials, patterns and embellishments that they can use. It’s just the way it is. Lingerie is still one of my great loves, but my focus has shifted away from the modern world and into the garments worn in bygone eras: from the whaleboned corsets of the late 19th century to the bullet bras of the 1950s. 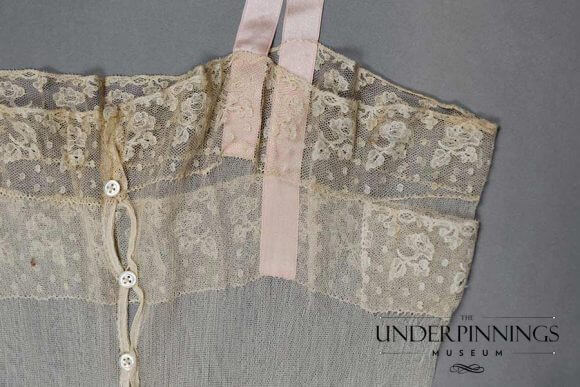 Back detail from a 1910s silk tulle and lace step-in teddy, from The Underpinnings Museum collection.
Photography by Tigz Rice Studios

As my passion for modern design has waned, I’ve found myself pouring my energies into a new venture: the founding of a website called ‘The Underpinnings Museum’. It documents my personal vintage lingerie collection and ultimately explores their history. But the history of lingerie is more than just pretty undergarments to lust after. As a designer, vintage and historical lingerie are one of the most valuable and important fashion resources that we have today. The world we live in now demands fast fashion: a constant stream of new designs, overwhelming choice and, ultimately, throwaway product. I’ve found that the study and appreciation of lingerie history is the perfect antidote to this. 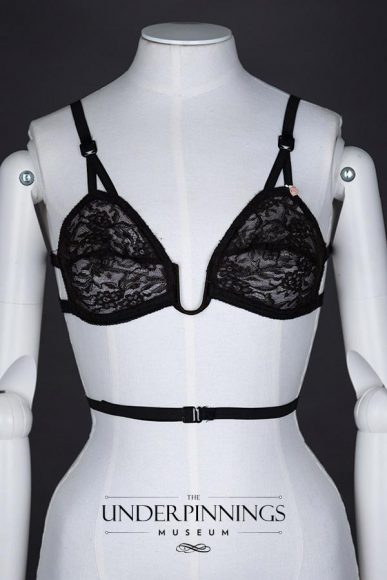 U-wire low-back bra, estimated to be from the 1950s.The strappy silhouette and U-wire often make a reappearance in modern designs. From The Underpinnings Museum collection.
Photography by Tigz Rice Studios 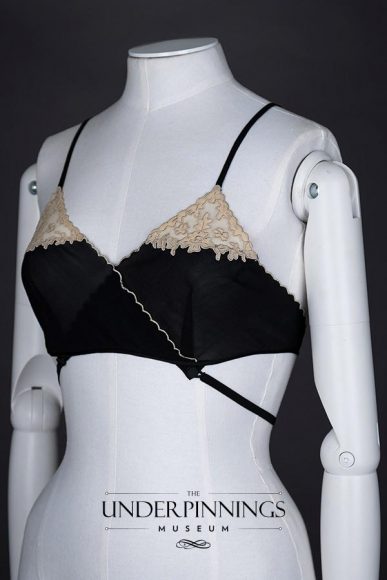 The Kestos-style bra saw its heyday in the 1930s. It was one of the first bras to feature separate cups. Although this example isn't from the actual Kestos brand, it is a beautiful couture rendition that is entirely hand sewn with beautiful embroidery work. From The Underpinnings Museum collection.
Photo by Tigz Rice Studios

My collection of vintage lingerie ultimately tells stories of innovation, craftsmanship and social change. The smallest details of the garments that we wear today were once matters of great significance and excitement: elastic was once scarce, with most bras pre-1950 being made to fit exactly with no give around the body. Shoulder straps remained fixed length until almost half a century after the invention of the bra.  The underwires that we take for granted today emerged from a pack of overwires, circle wires, U-wires and monowires; likewise, hook and eye fastenings had their own evolution. 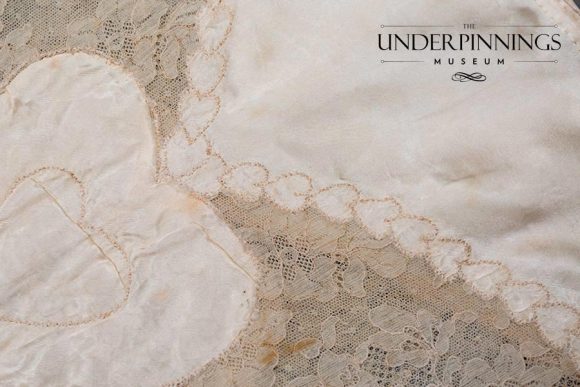 These 1930s satin and lace tap pants are entirely sewn by hand, including the heart-shaped appliqué embroidery. From The Underpinnings Museum collection.
Photo by Tigz Rice Studios 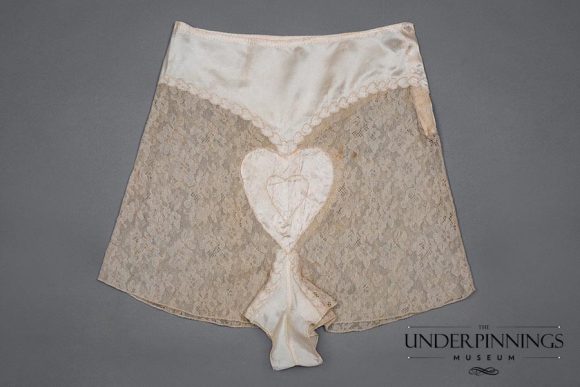 1930s satin and lace tap pants. This garment has been entirely sewn by hand, with impeccable finishing: tiny French seams, a rolled hem and exquisite embroidery. This single garment would have had hours of work poured into it. From The Underpinnings Museum Collection.
Photo by Tigz Rice Studios

The 1930s saw some of the finest lingerie craftsmanship that has ever been: swooping bias cuts, tiny French seams, lashings of lace appliqué and the most impeccable hand finishing. These garments were the pinnacle in decadence and they were made to be treasured. The true testament to this is that there is ultimately very little modern lingerie that compares: even at the highest-end of the market, it is now extremely unusual to see a silk garment with 3mm French seams and embroidery that has been entirely sewn by hand. Once, it was commonplace. 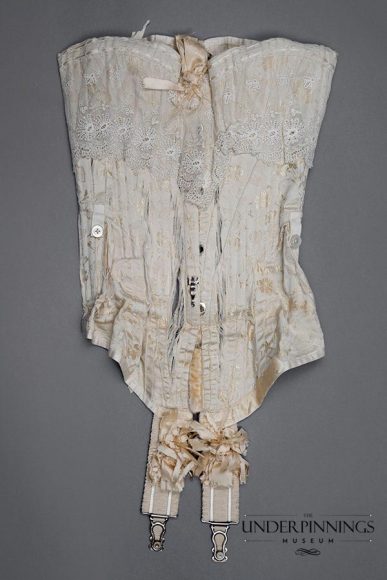 This Edwardian corset is exquisitely beautiful and wonderfully complex. The pattern for this garment is extremely challenging and this piece would have been quite restrictive to wear, compared to corsets from the previous century. From The Underpinnings Museum collection.
Photo by Tigz Rice Studios 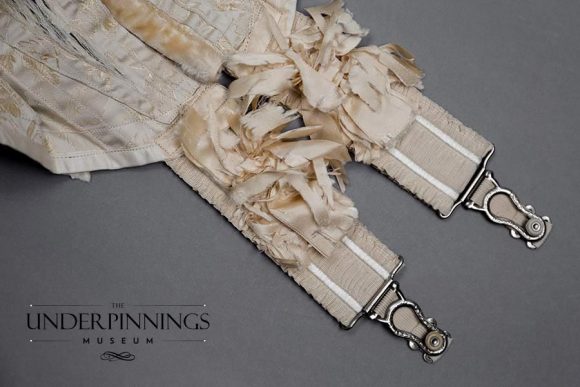 Studying the pattern shapes of the undergarment evolution between the 1910s and 1920s reveals fascinating knowledge about our society. Edwardian fashion relied on complex corsetry: by the end of this time period, the cuts of these garments had become incredibly complicated. Panels were cut diagonally, to force the body into the sinuous S-curve that was so desired: a silhouette that was incredibly restrictive. The undergarments of the 1920s were ultimately a rebellion to this: corsets were eschewed, and it was in this era that we saw the first renditions of the bralet. Tap pant, teddies and chemises became the new standard. The patterns of these garments were as simplified as they could possibly be, relying on rectangles with darts for shaping. It represented a new freedom for women, in their movement and in their dress. 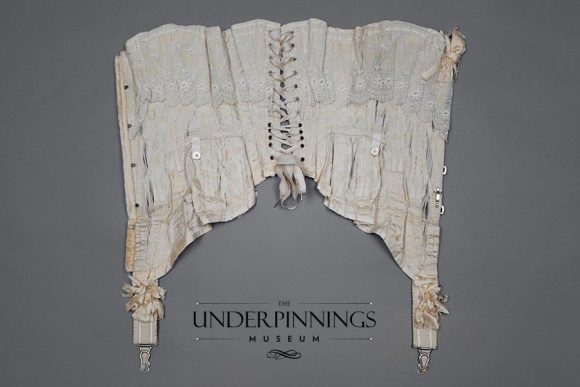 This Edwardian corset is made from a single layer of lightweight silk and is incredibly fragile. Every time it is handled, no matter how carefully, it sustains further damage. Ultimately it is too delicate to display on a mannequin, but it still offers deeply valuable study opportunities. From The Underpinnings Museum collection.
Photo by Tigz Rice Studios 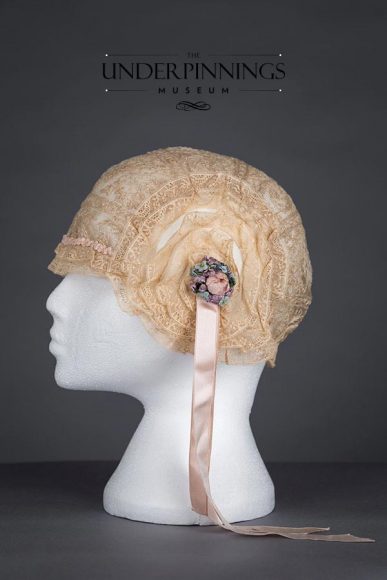 Embroidery and lace boudoir cap with rosettes and silk ribbon streamers. Estimated to be from the 1920s. From The Underpinnings Museum Collection.
Photo by Tigz Rice Studios

I feel a sense of obligation to make a record of these valuable garments. For all intents and purposes, lingerie is a finite resource. Fabrics such as silk and elastic start to shatter and degrade over time: much of my collection that is dated before the 1920s is irreparably damaged in this way. Every time these garments are handled and taken out of storage that damage only worsens. By at least cataloguing these pieces permanently in photos, there will be some record of them that can outlive the physical object. 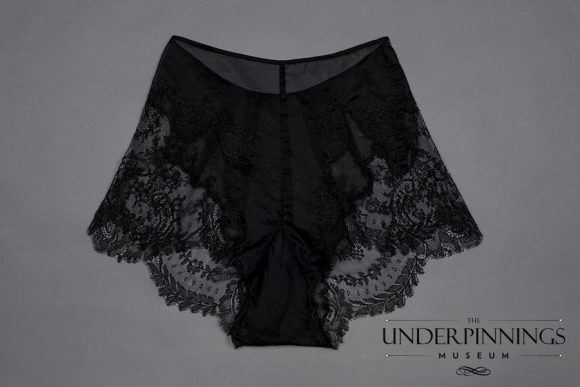 Lingerie has a long and convoluted history, with more value than most people recognise. The Underpinnings Museum will be a free access museum which documents garments through detailed imagery and their written stories. We plan to launch the museum this November and are currently crowdfunding through Kickstarter to help to raise funds for the website set up. If this is a project that you would like to see come to life, any support is invaluable: be it through backing the campaign or simply sharing the museum with your friends.

Readers: Do you think there is a need for a museum dedicated to lingerie? What is your favourite era in the history of lingerie?