Full Busted Frustration: When Breast Size Meets Society | The Lingerie Addict: Helping You Find The Lingerie of Your Dreams! 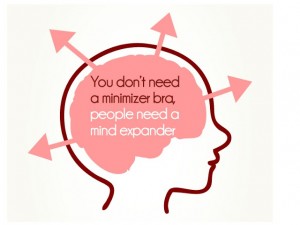 A few nights ago I found myself having a distinct sense of deja vu as I tried to explain bra sizing to my mother over the phone. My mother had asked a question about the full busted market, and about halfway through my explanation she burst in with the dreaded question: "But doesn't it just mean that you're fat if you're full busted?"

And there's the rub if you're full busted --- for every pretty bra in your size, there will be a person who believes that just because you have breasts means that you're fat (and occasionally slutty). For every one person who believes you're automatically fat because your breasts are larger, there will be at least three who tell you how your breasts must be such a burden to you, you poor thing. It's like when well-meaning people concern troll you about dieting, except this time they are talking about breast reductions. The worst part is the people saying these things aren't even trying to be mean, because they honestly believe these assumptions are exactly like facts because they are so widespread.

Part of the issue is we internet writers spend lots of time marveling at how breasts are getting bigger and bigger without delving into the issues of why. Is it hormones at earlier ages? Is it something in the air? I know I've seen at least three articles in the last two months marveling at "the largest bra ever made" like a K cup is some kind of super bra that can destroy whole cities.

The other type of article involving larger cup sizes you see on the internet is the kind where women talk about how much they hate their breasts and how they're such a burden. It usually is accompanied by some horrified talk about how women are getting large breast implants in droves. The one that broke my heart the most was a relatively recent article on Jezebel, where the author lamented what her breasts had done to her: "When you have large breasts, you're constantly aware of them, just hanging out on your pectorals, waiting for a baby to feed, slowly, slowly, slowly dripping unstoppably downward, victims of gravity. The happiest times in my adult life have occurred when I wasn't laden with too-big breasts. The only thing they ever helped me do is get honked at by guys in pickup trucks with sexy lady silhouette mudflaps."

Here's the problem with all of these articles: they paint women with large breasts as outliers. We're either people to be ogled or people to be pitied, but either way we're not normal.

So what can we do, dear full busted ladies, to combat these frustrating assumptions?

1) We can be open about bra sizing in conversations and try to educate others. Many people don't understand that a G cup on one person can look wildly different on another, and that larger cup sizes are quite normal. I'm not saying you have to wear a tag with your bra size, but do try and educate your friends and family members who care! There are lots of bra calculators and other resources online now that can help people learn about bra fitting even if you don't have a boutique near you.

2) We can advocate for bras that fit rather than reduction surgeries. One of the things that scares me is how young girls are being told about reduction surgeries rather than being fitted properly for bras. I'm not against reduction surgeries, but I believe they should be something that comes after trying well fitting bras and seeing if that solves some of the discomfort. If you feel like you are literally lugging bowling balls around, your bra probably doesn't fit right.

3) We can insist that our breasts are merely that, rather than personality traits. I have big breasts, but they don't define me. They don't make me hate myself, they don't make me fat or lazy, and they don't make me less or more attractive than I would be otherwise. Until we stop associating cup size with different levels of attractiveness and personal characteristics, we can't really make progress as a society.

I know these kind of assumptions aren't restricted to full busted women, but I think breaking down stereotypes benefits us all. After all, if the world could see us instead of just our breasts, wouldn't it be a nicer place?