The Next Victoria's Secret? Exploring the Honey Birdette Controversy 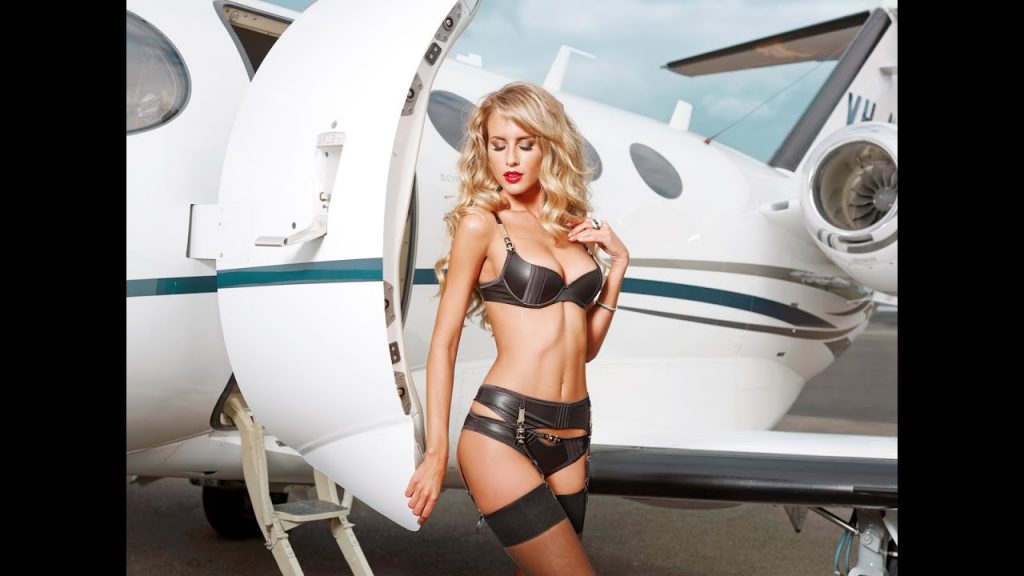 Though they haven't yet taken over the States in the same way they did in Australia, the label now has a few stores in California, and offers free shipping and free returns across the US.

I’ve heard the brand called something like “Australia’s answer to Victoria’s Secret,” but it feels more like a super-sexualized Agent Provocateur. The label has a more aspirational vibe than the modern “everyday sexy” of Victoria’s Secret. 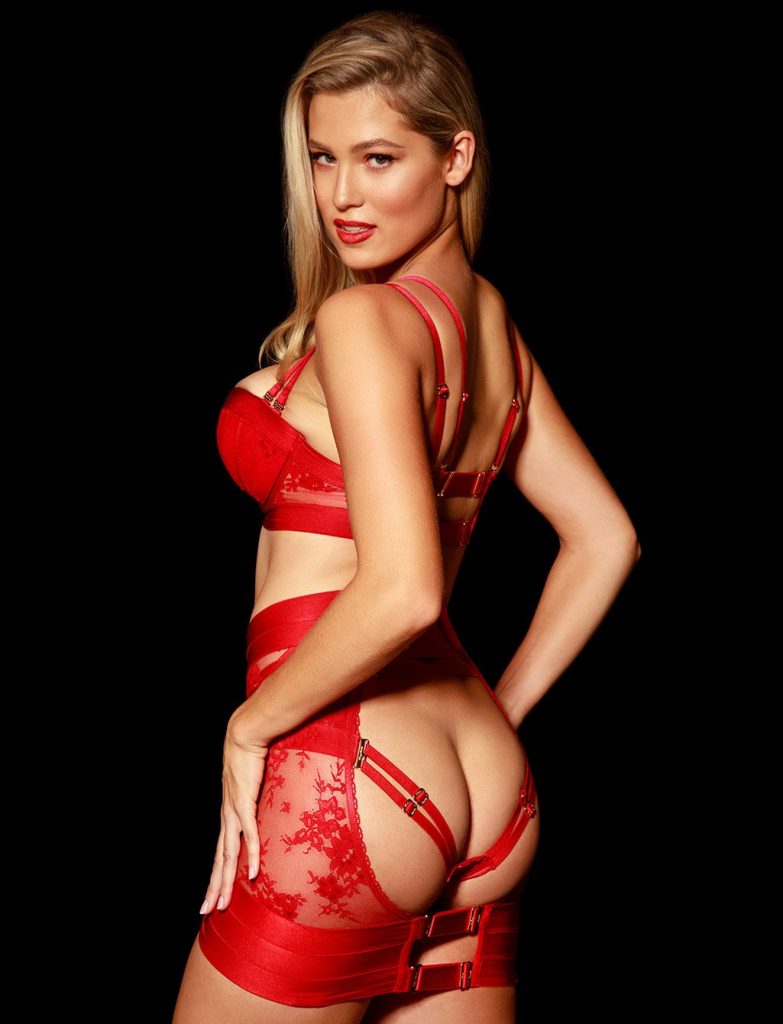 Honey Birdette has a wide size range for a mass-market luxury brand, with bands in sizes 30 through 40, cups in sizes A through UK FF/European H, and bottoms in sizes XXS through XXL. Compared to the narrow sizing of some of their well-known competitors, it's quite impressive.

But the brand is not without disputation. In fact, I’d say half of its brand lore in the public eye revolves around its ethical choices. 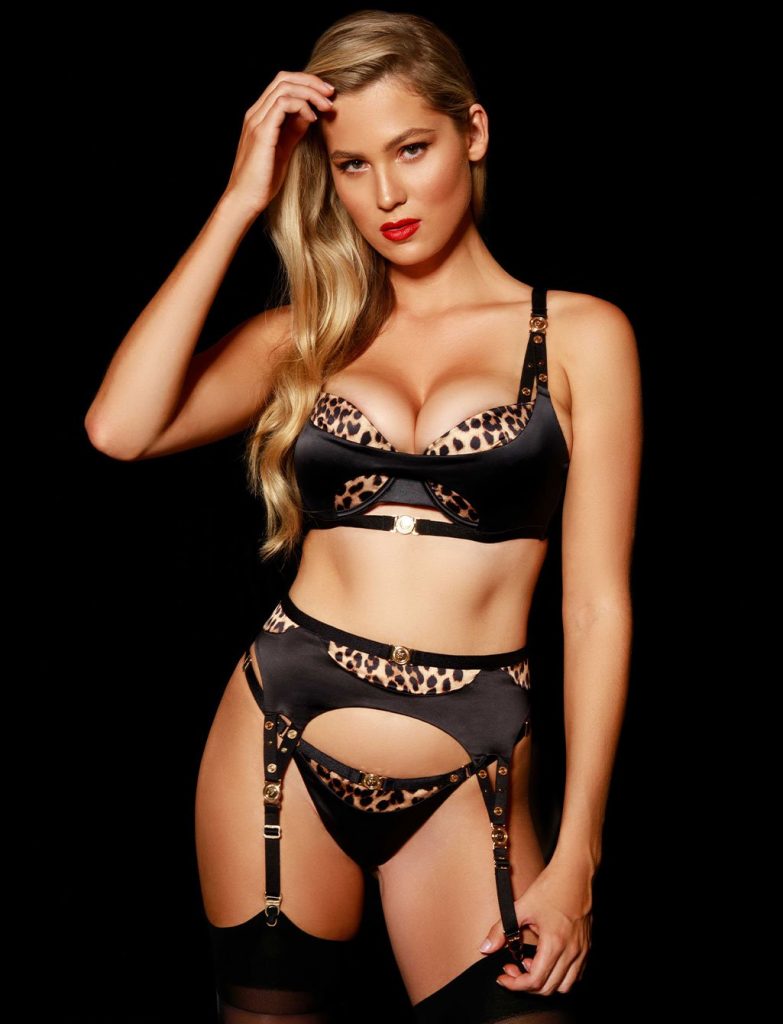 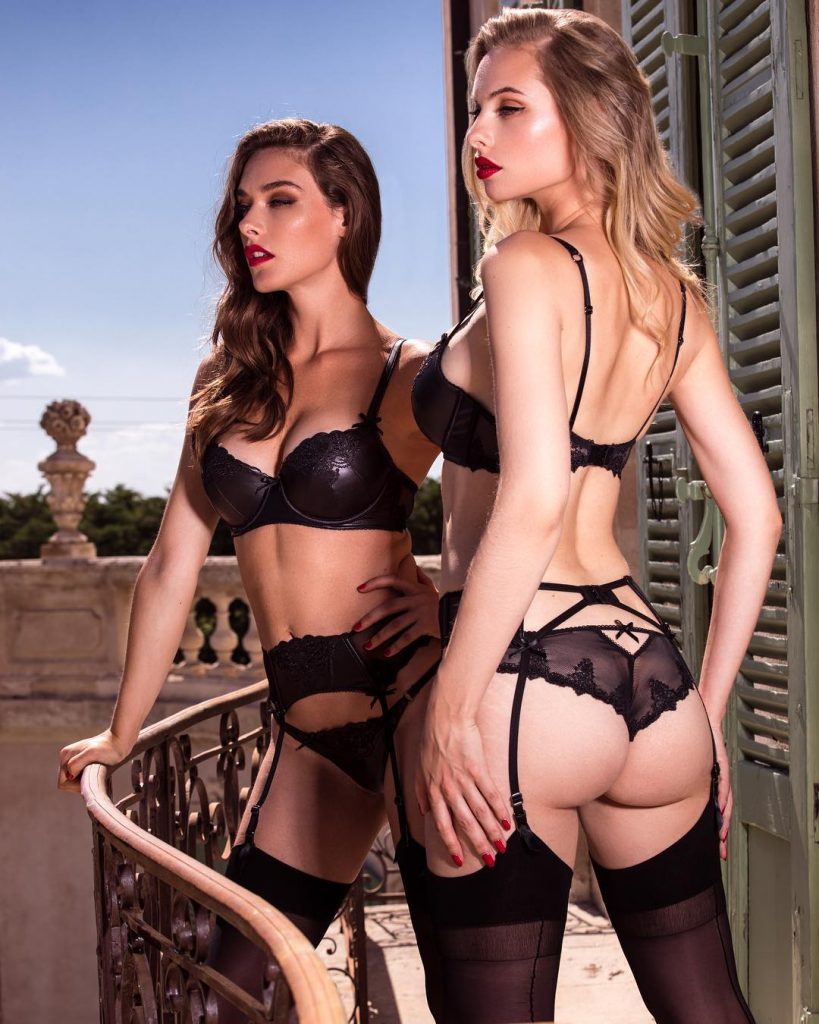 According to a 2018 article on Mumbrella, this 2018 Honey Birdette ad was banned because the blonde model's pose was "over sexualized" and too much of her butt was showing.

Regardless, as of 2018, Honey Birdette had 20 ads banned by the Australian self-regulating advertisement organization Ad Standards. 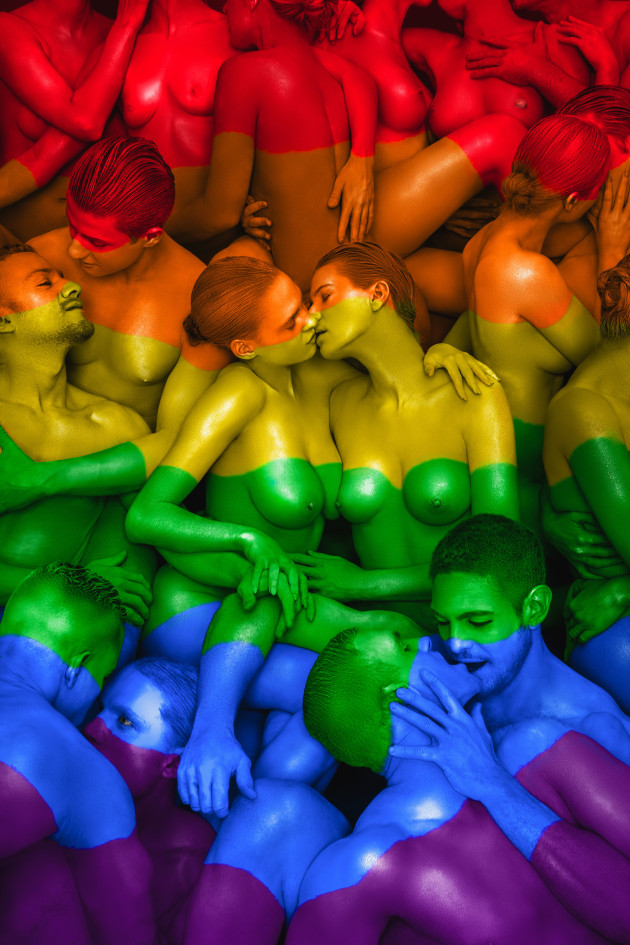 Most recently, Ad Standards banned their #FLUID campaign in early 2020, allegedly due to visible female nipples. This promotional photo was meant to coincide with Sydney’s Gay and Lesbian Mardi Gras and featured models "stripped down and stripped back to celebrate the power of the LGBTQIA+ community." It's interesting to consider whether or not the ad campaign would have been banned if the models wore lingerie, or if it only featured heterosexual couples.

Of course, there's also the fact that this corporate advertisement is cashing in on the idea of "equality" by photographing models of one age, size, and race, and centering the whole thing on two conventionally-sexy women kissing in the very middle. Honey Birdette says they're "in the business of creating love," not controversy. But it is curious that they'd decide to take this direction to achieve that concept. 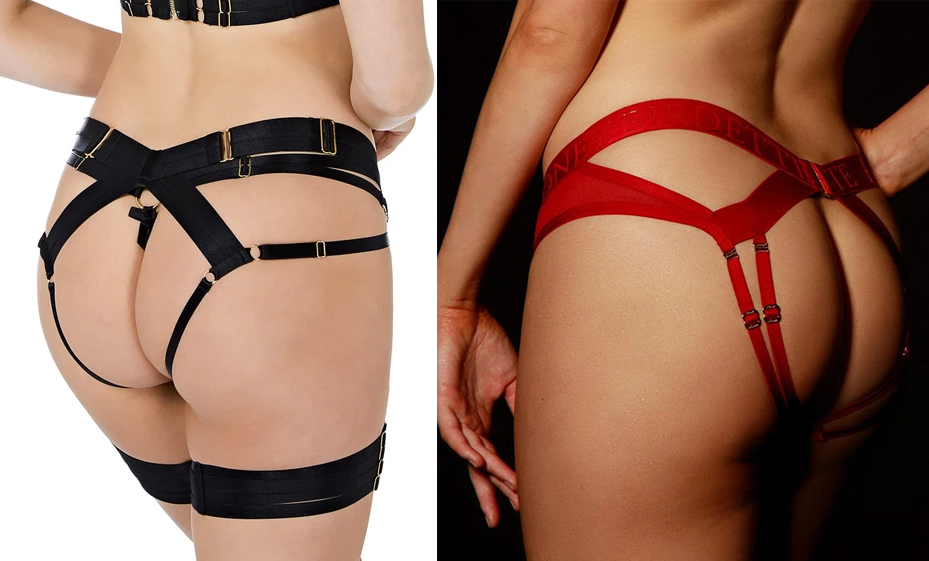 Aside from their advertising choices, Honey Birdette has a reputation for taking inspiration from higher-end brands like Bordelle and Agent Provocateur (as you can see in these examples).

If you've read TLA for awhile, then you know this is a common practice across the fashion industry, from brands directly knocking off another brand's style, or simply being inspired by a piece of lingerie from another company. However many luxury brands are still understandably upset. 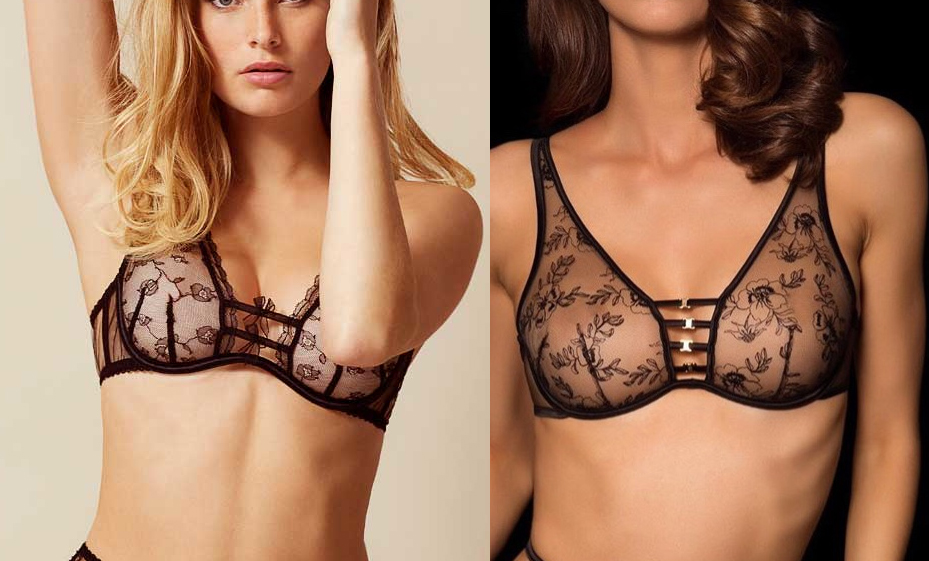 But the most important ethical issue is Honey Birdette's treatment of their sales associates, who say they must wear high heels to work, buy new products every season, disregard sexual harassment, and ignore sexist customers. (Most articles are from 2016 and 2017, but you can read more recent employee reviews on their Glassdoor page). 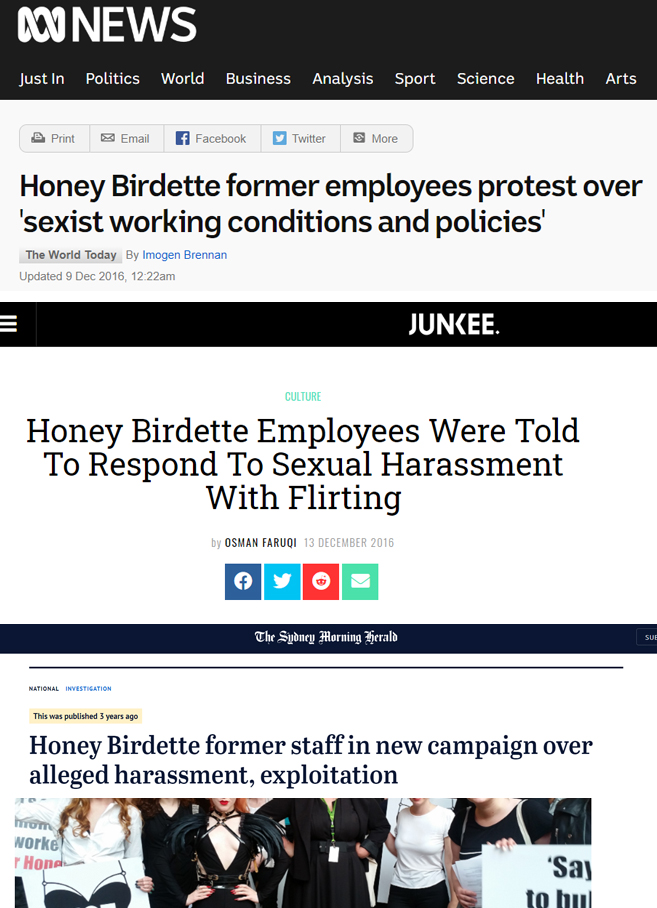 A few Australian-based headlines regarding Honey Birdette's alleged mistreatment of their employees.

This criticism is absolutely just and understandable, and my upcoming review was my first (and very hesitant) Honey Birdette purchase because of it. Regardless, I’m always a little surprised at the amount of people shouting that Honey Birdette is the most unethical company to buy for, because really, what they’re doing is…not unusual.

These are all companies with relatively good brand images, who you may be surprised to hear this about. And the same people boycotting Honey Birdette likely still shop there. 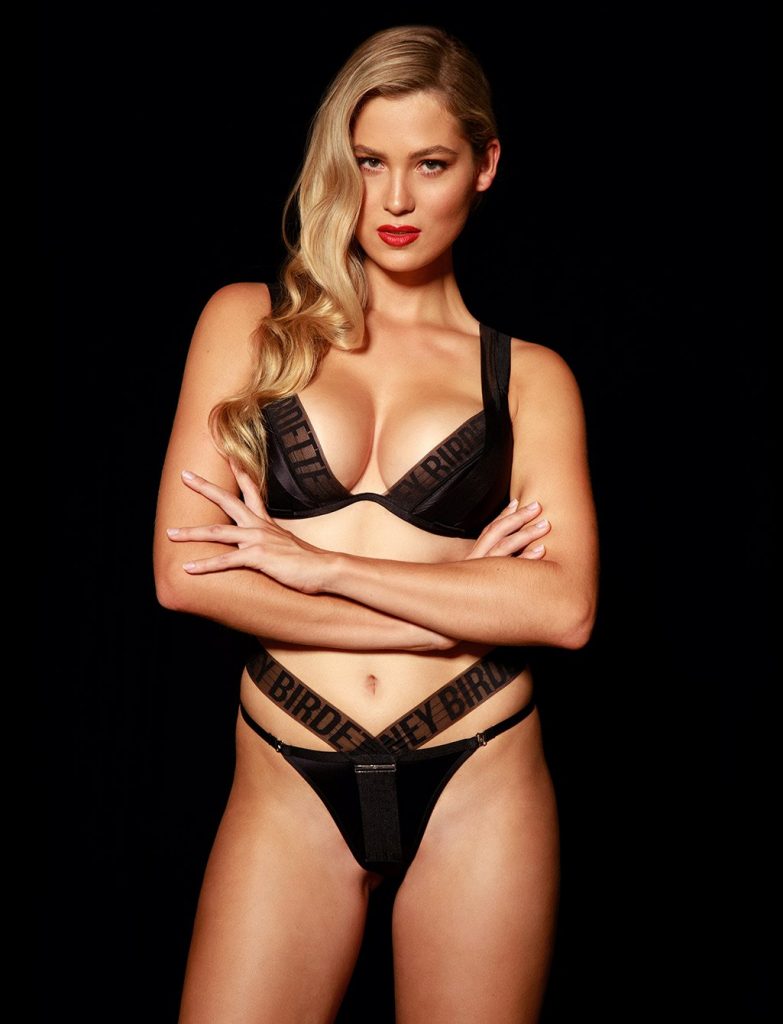 Do I think Honey Birdette is an ethically-run company who has done nothing wrong, and the people who refuse to shop with them are misguided? Absolutely not! Do I think the company is doing anything significantly more horrible than other lingerie companies? Also no.

Just because there’s a lot of negative noise around one brand, doesn’t mean they’re significantly worse than their competitors.

The Spring Campaign: "Turbulence" (Oh no.)

So I wrote all that, and then...COVID-19 happened. We all got stuck at home. And Honey Birdette moved forward with their Spring 2020 campaign, titled "Turbulence."

Reader, it is a sexy airline-themed ad campaign, released during a time when flying is a great way to spread a novel, deadly disease. 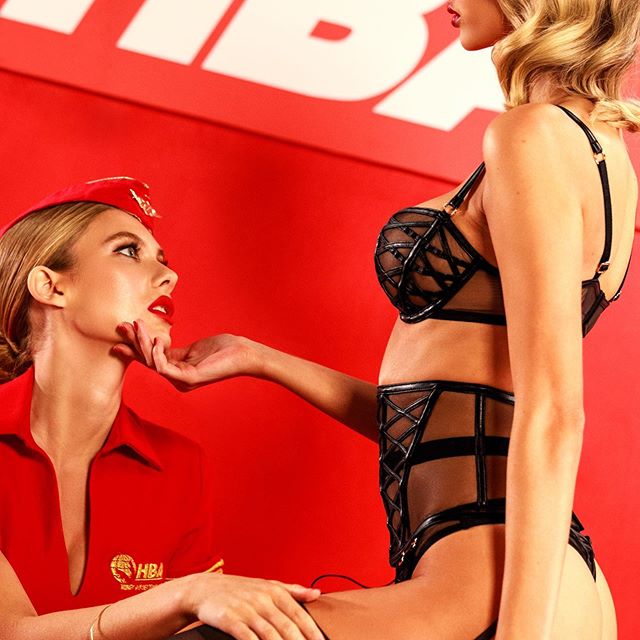 Honey Birdette rightfully rearranged their marketing messaging to promote the aspirational, daydream-y aspects of flight, for customers who are sadly stuck at home. Unfortunately, it misses the mark. The press release reads, "Turbulence comes at a time where stay at home orders worldwide have us lusting for social encounters and dirty weekend getaways."

Sure, I'd love to go on a flight across the country right now, but for the vacation, not the flight. Nothing about the flight experience sounds fun, hygienic, or safe to me during this time, and I usually love flying.

I especially don't want a "dirty weekend getaway" right now (couldn't they have used a word other than "dirty"?!). I'll take social encounters from a distance, but I don't want to touch my flight attendant's butt. 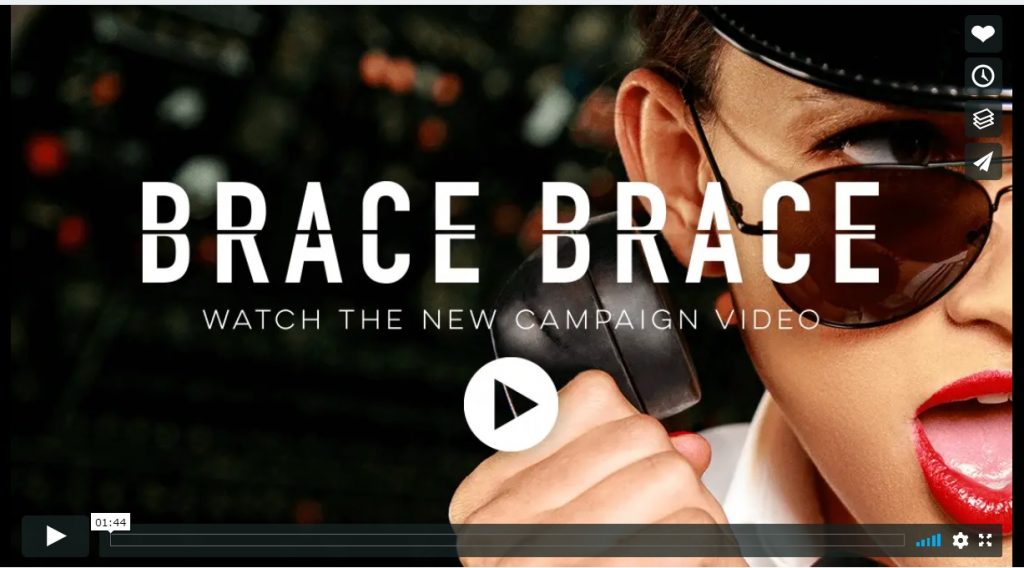 You can watch the video campaign on Vimeo here.

Of course, even on the best flights, I never want to touch my flight attendant's butt, which tells you I'm probably not the target customer for Honey Birdette's marketing campaigns. But even with the descriptive copy edited to reflect our current climate, this one feels objectively tactless.

Honey Birdette says the "Turbulence campaign will have you reaching for the oxygen mask," which... did they forget that thousands of people need outside oxygen supply to live through the pandemic this brand is attempting to market around? Major cringe.

The Turbulence campaign doesn't significantly change my (already poor) view of the brand, and I’m not gonna be out here spending all my hard-earned dollars at Honey Birdette either way.

We all have to follow our own ethical compasses when it comes to making shopping decisions, and an educated purchase is the best kind of purchase. I’d rather support indie labels owned by people I personally know, or companies with actual ethics statements, or brands with visionary designers who turn lingerie into incredible works of art.

I did purchase a set from them earlier this year, and I'm excited to review it... Although, honestly, I probably wouldn't have bought it after seeing this ad campaign, and I feel a little gross when I look at their website now.

How do you feel about Honey Birdette? Do a brand's actions impact your shopping decisions? Or do you prefer to shop based on the products alone?