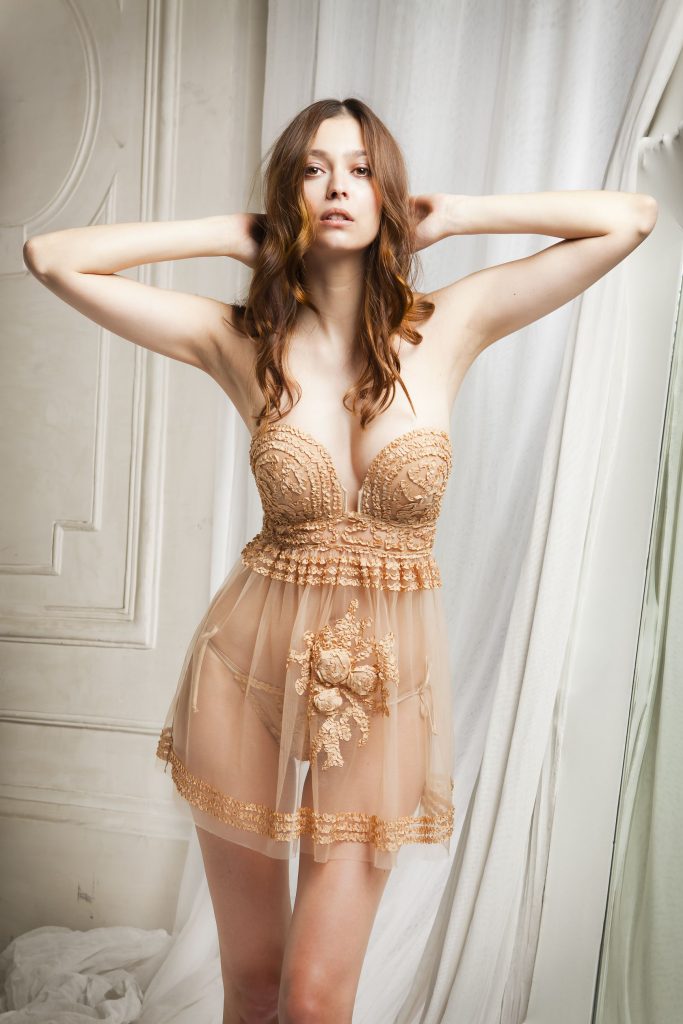 No collection in the history of lingerie has impacted me personally and professionally as much as the Jean Paul Gaultier for La Perla collaboration, ‘Collection Créateur.’

The first installment of the collaboration released at the very start of my lingerie studies. With 3-4 figure price tags on every garment, my student budget meant that these designs were a distant dream. Yet that didn’t stop me wandering wistfully around La Perla stores, studying and gently pawing at the garments. I’m eternally grateful to the sales assistants who tolerated this with good humour. 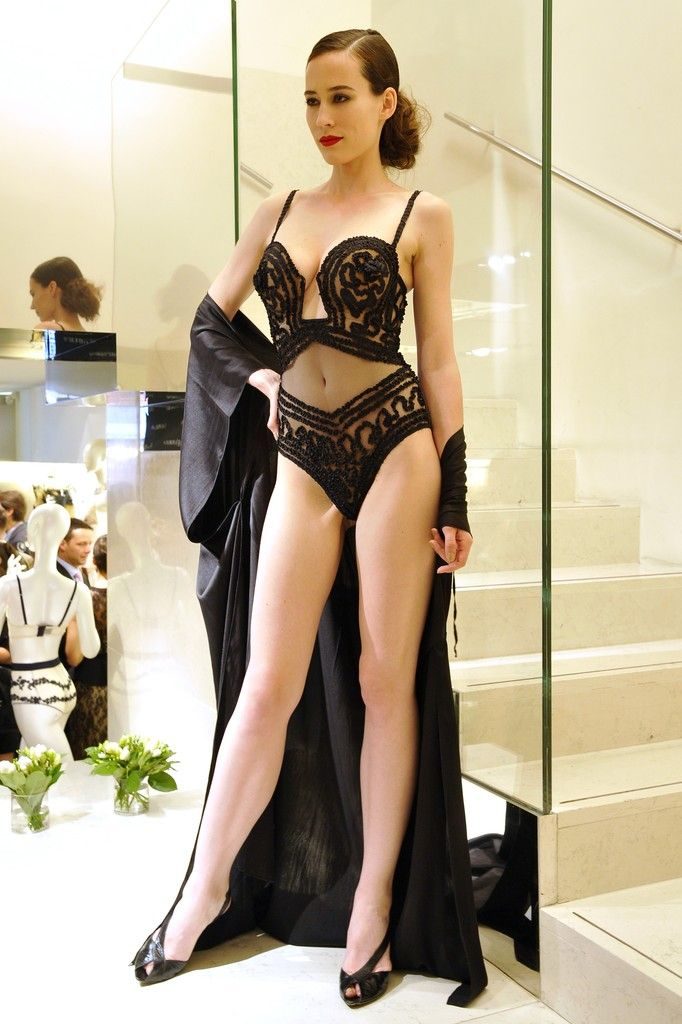 The first collection released in 2010 to great critical acclaim. This was a fashion marriage made in heaven: Jean Paul Gaultier as the Enfant Terrible of Haute Couture, renowned for his daring and boundary destroying designs, paired with La Perla, the heritage luxury lingerie house, founded in Italy in 1954. 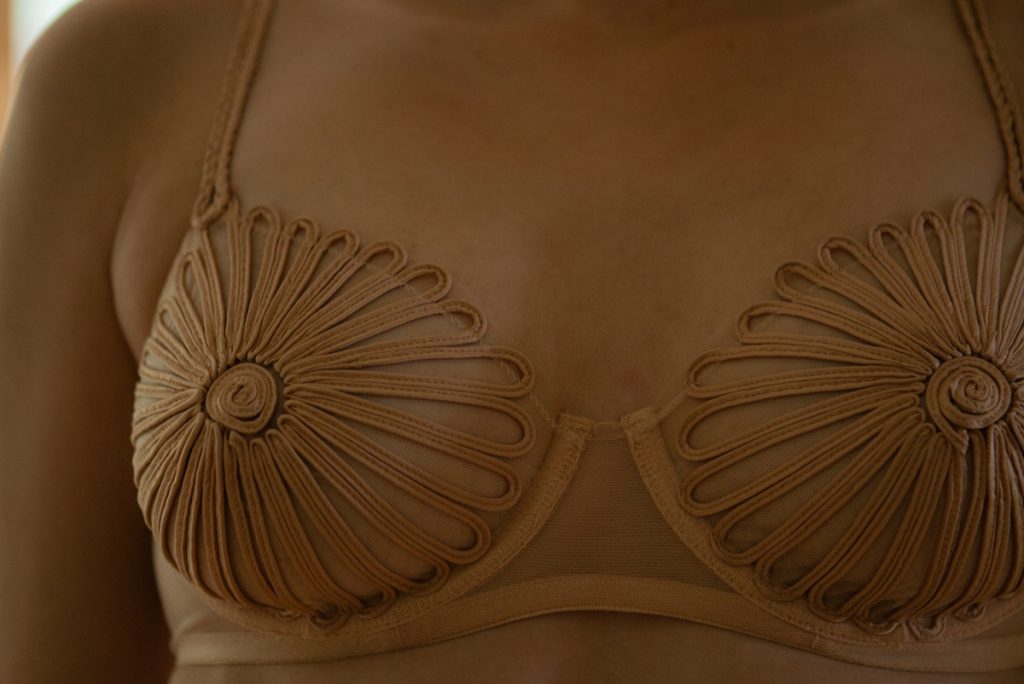 Detail of the 'Feuillage' bra by Jean Paul Gaultier for La Perla. Photo by K. Laskowska

The entirety of the ‘Collection Créateur’ was ready to wear (although certain pieces did feature on Gaultier’s Haute Couture catwalk), with a narrow range of sizes held by La Perla stores and stockists. It was phenomenally expensive for a ready to wear collection.

The ‘Frou Frou’ range (from AW10/11) sold knickers at $535 and bras at $705. Yet the level of detail and craftsmanship in this collection often justified and exceeded this price point. To this date, I have seen very few ready to wear lingerie collections that even begin to come close to these designs. 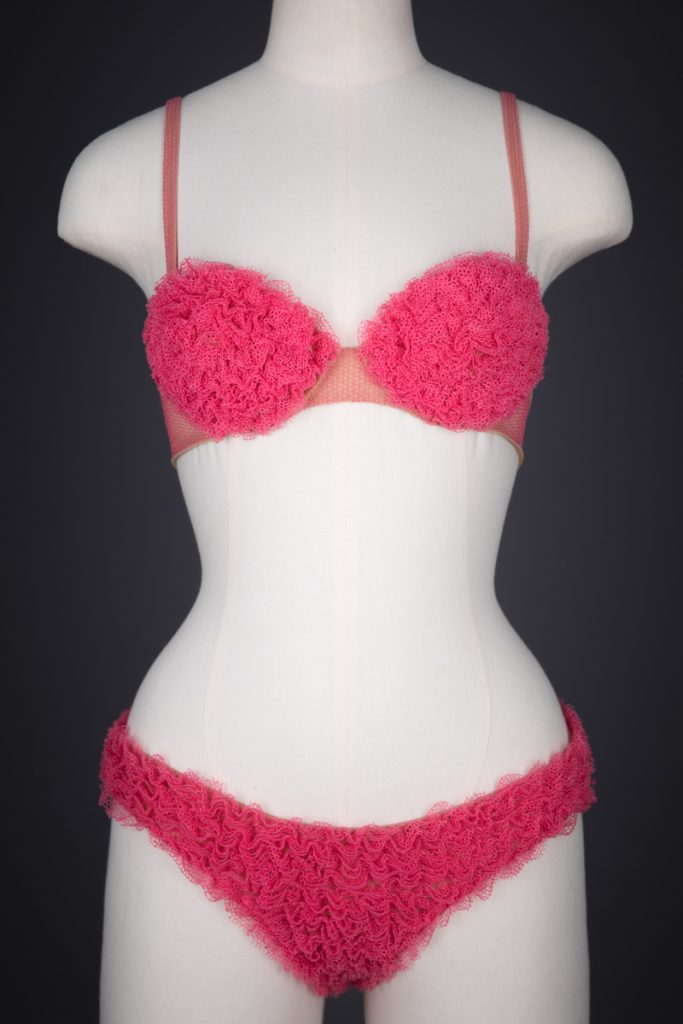 It’s still difficult to understand the target audience for this collection. Certainly, the couture touches are exquisite, and the creativity difficult to deny. But the majority of lingerie buyers simply aren’t creative, and it’s a well known fact that haute couture is not profitable.

Bringing Gaultier’s flare in the haute couture world to lingerie was never likely to translate to big profits. Lingerie has notoriously poor profit margins within the fashion industry. What sells best in the lingerie world, even within the luxury sector, tends to be the more pedestrian designs: neutral colours, smooth fabrics, and contoured cups. Even the celebrity appeal of Gaultier wasn’t going to make structured cone bras and powder puff ruffles fly off the shelves. 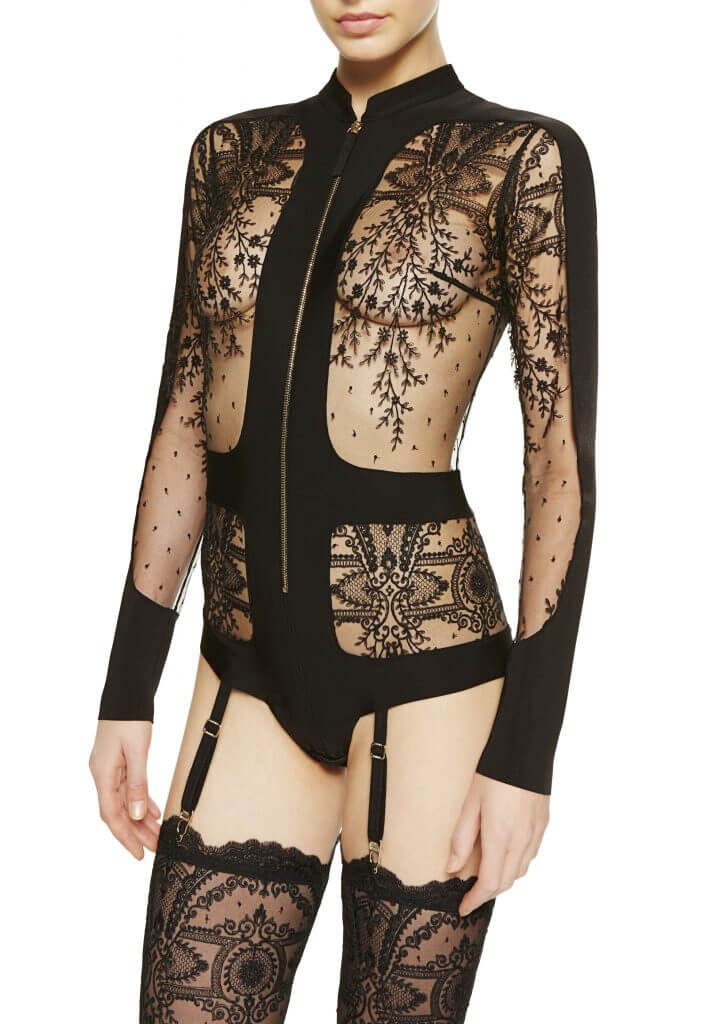 The final collection from the collaboration released in 2013, the same year La Perla declared bankruptcy. Although the brand was eventually bought out, it's since struggled to find its fotting.

In the years since, La Perla has seen declining sales, numerous rebrands, changes of creative directors, and new owners. As recently as last month, the label was in talks to avoid major layoffs. It has to be said that the brand never really regained its ‘spark.'

The majority of the collections since its bankruptcy have been lackluster (perhaps with the exception of the SS16 collection and ‘Neoprene Desire’ range), and some of the brand's business decisions have seemed downright bizarre. Think Kendall Jenner as the brand face, and expanding into leather handbags and logo emblazoned wedding dresses. 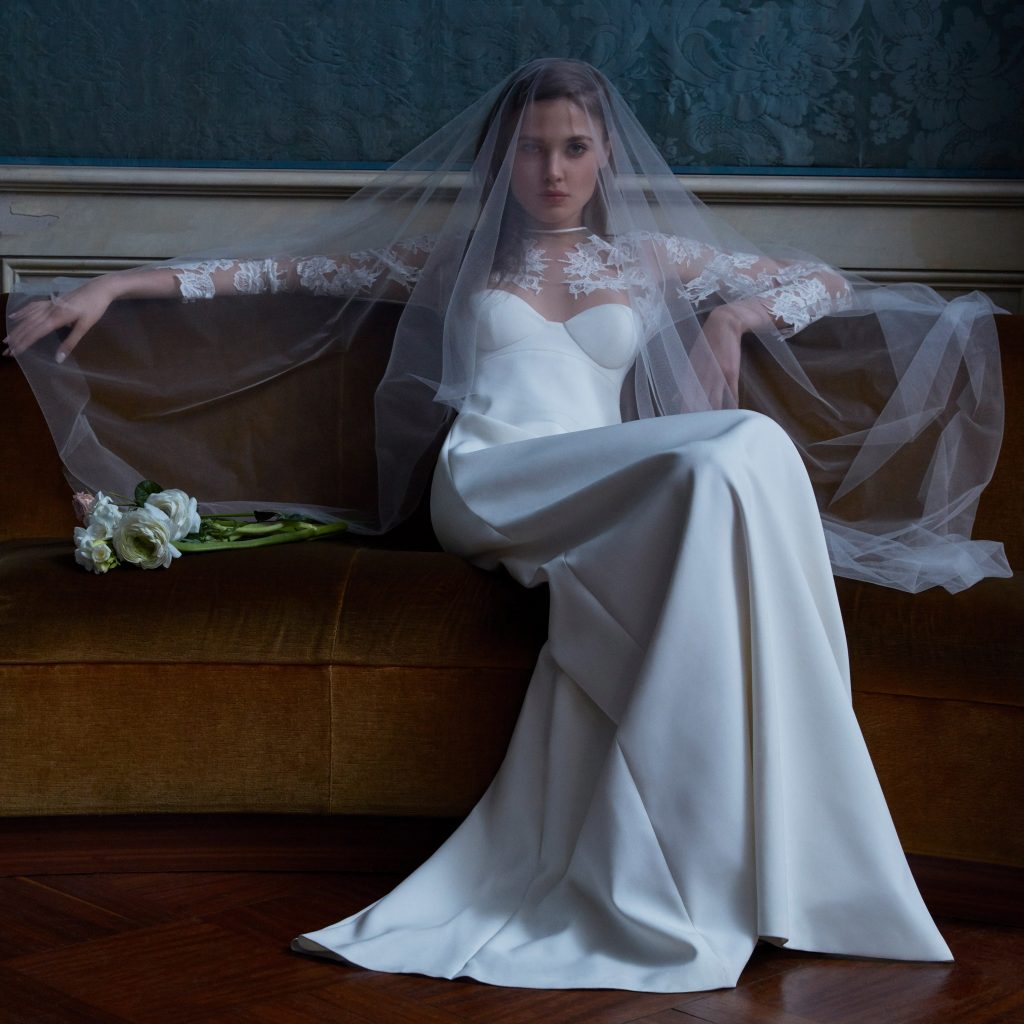 I’ve been fortunate enough to add a number of the designs from the collaboration to my personal collection over recent years. La Perla’s financial wobbles mean the label’s deadstock had flooded the resale market. I kept an eagle eye on resale sites and was able to snap up some of my favourite pieces from the collection.

The experience of wearing and studying these in the flesh remains as exquisite as in my student days, and I want to share some of my favourites with you here, focusing on the details that make these designs so exceptional. 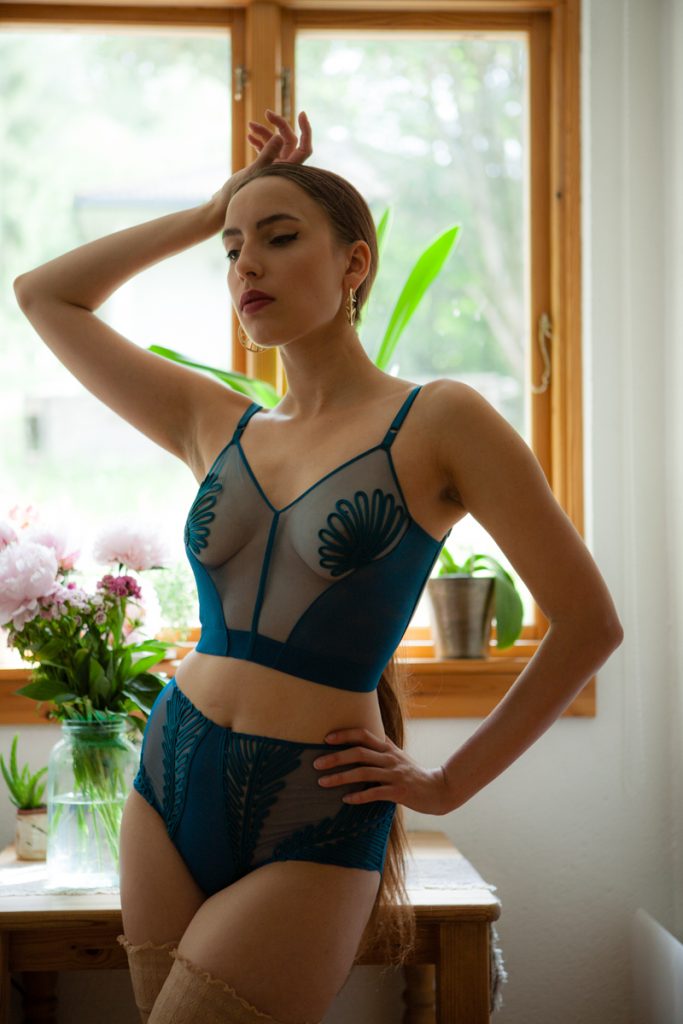 The ‘Feuillage’ range was one of the first collaboration releases. The range is based around intricate silk soutache embellishment, an embroidery technique where a braid is stitched to the base textile in intricate patterns.

The technique was particularly popular in the 19th century, where it was commonly used to embellish military uniforms. The ‘Feuillage’ take on soutache uses tubes of silk twill stitched to a base of fine tulle. 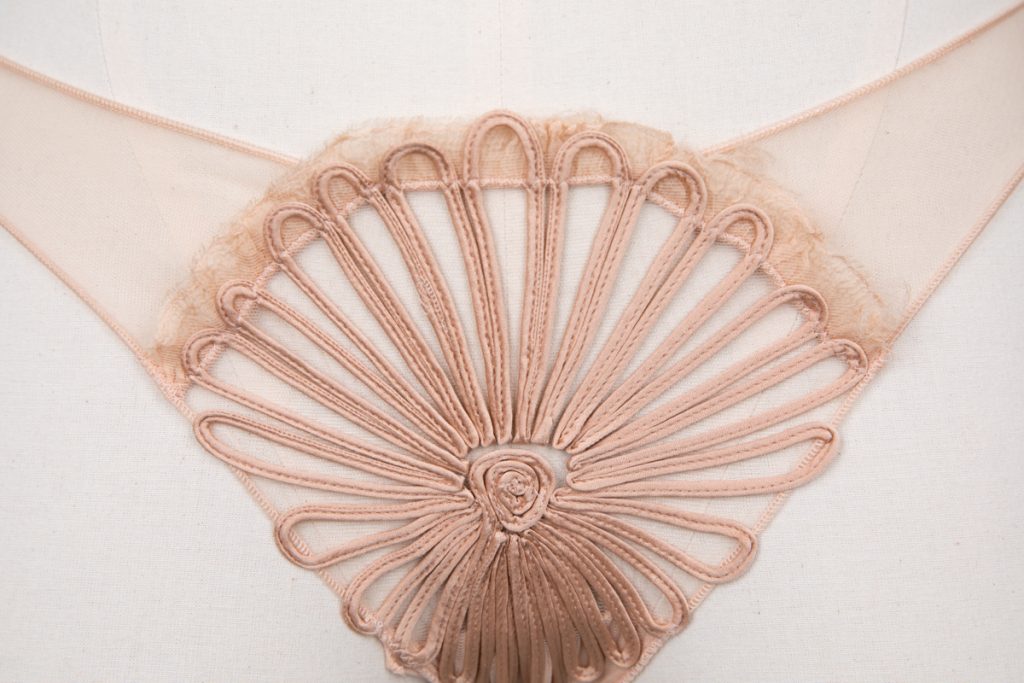 The range features exquisite design contradictions. Alongside the intricate soutache, the garments are trimmed with raw cut silk georgette edges. Leaving a fabric like silk georgette with a raw edge, which is especially prone to fraying, should be a cardinal sin. Yet in these designs, it felt deliberate and considered, a cheeky nod to Gaultier’s irreverent approach to design. 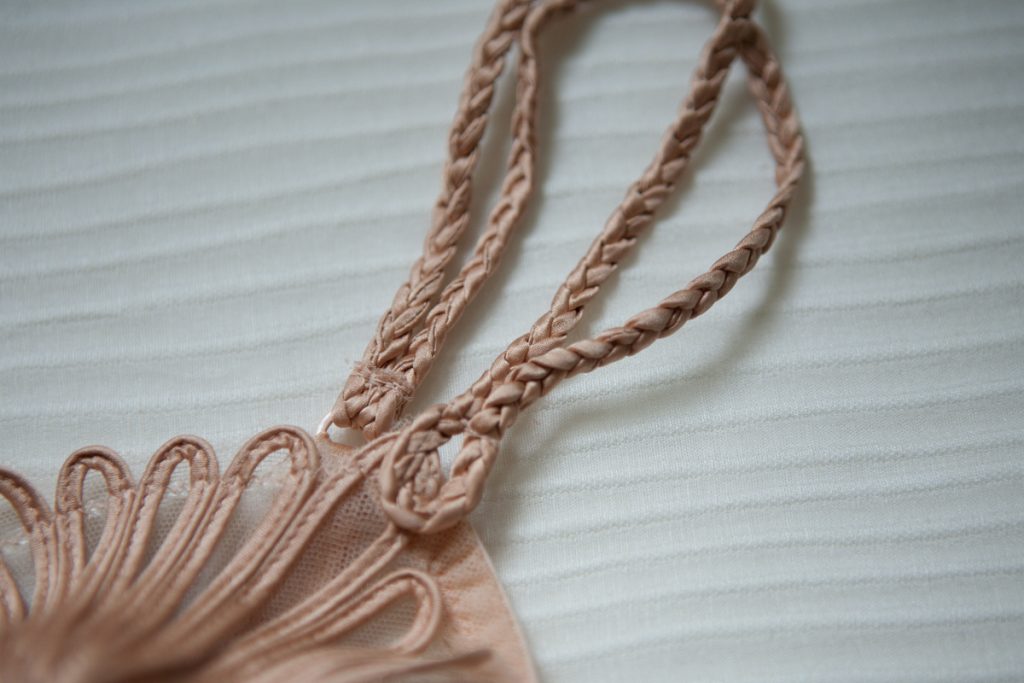 Every detail of this range is carefully considered. The bra shoulder straps comprise of braided bands of silk, and the underwire and bone channels of the bras are lined in silk.

The intricacy of the soutache blows my mind. I can barely begin to image the skill and patience required to stitch a one-off garment with this form of embellishment, let alone a full production run. 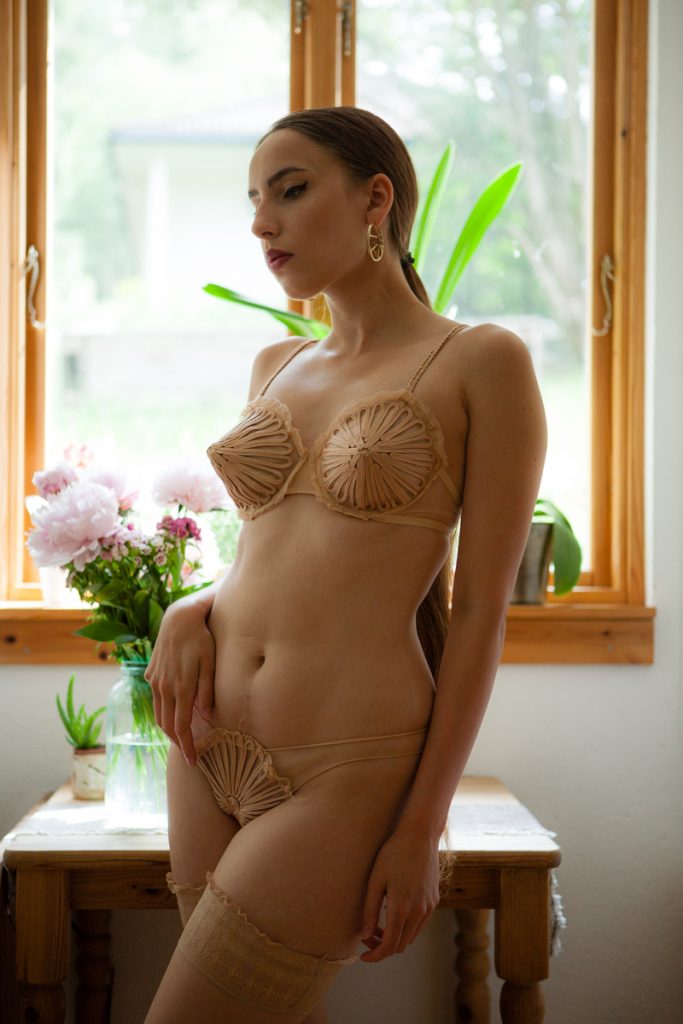 The cone bra of the range is a personal highlight. An obvious nod to the bra silhouettes of the 1950s, this extreme shape is also inseparable from Gaultier’s aesthetic (who can forget his stage costumes for Madonna?). This bra includes boned cups for an exceptionally pointed bustline, taking this garment as far away from commercial contour bra cups as possible. 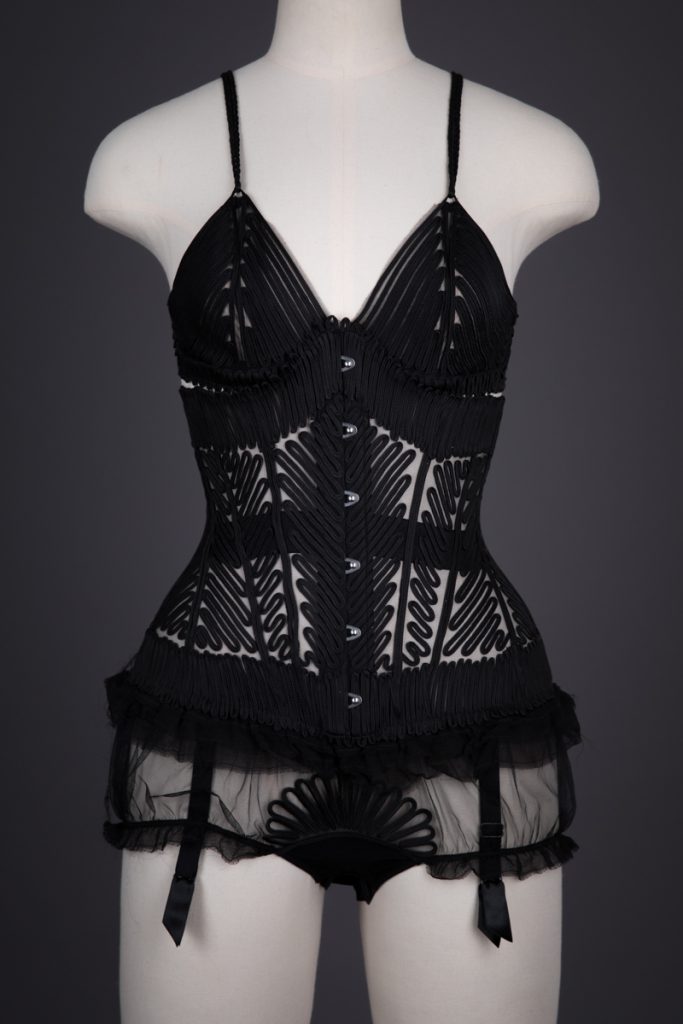 'Feuillage' bra and corsetted brief by Jean Paul Gaultier for La Perla. From The Underpinnings Museum. Photography by Tigz Rice.

Although the corsets released in this collection aren’t ‘true’ corsets (in the sense that they are only lightly structured, stretchy and offer little actual waist shaping), they are beautiful objects in their own right. This cincher style incorporates a silk bloomer knicker, with braiding embellishment across the entire body of the garment.

For me this is one of the truest differentiations between luxury lingerie and fast fashion - when a designer considers the visual impact of the garment from all angles, rather than just the front. 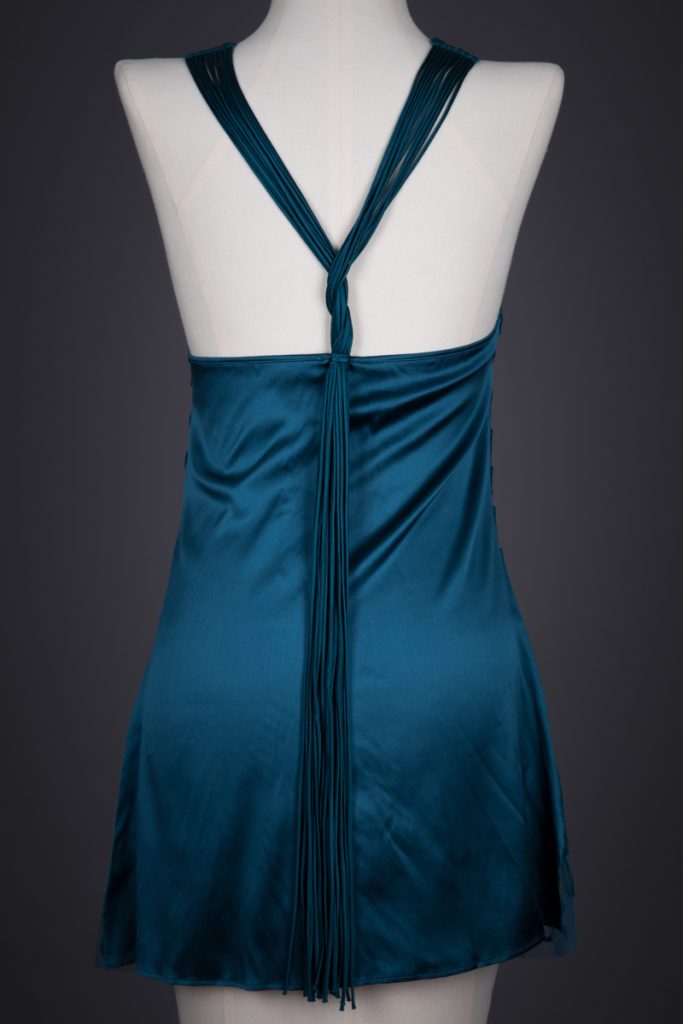 There is a special place in my heart for lingerie design that is created with movement in mind, rather than as a purely static object. This babydoll incorporates the most incredible twisted tassel of silk braids down the centre back, and it truly comes to life on the body. 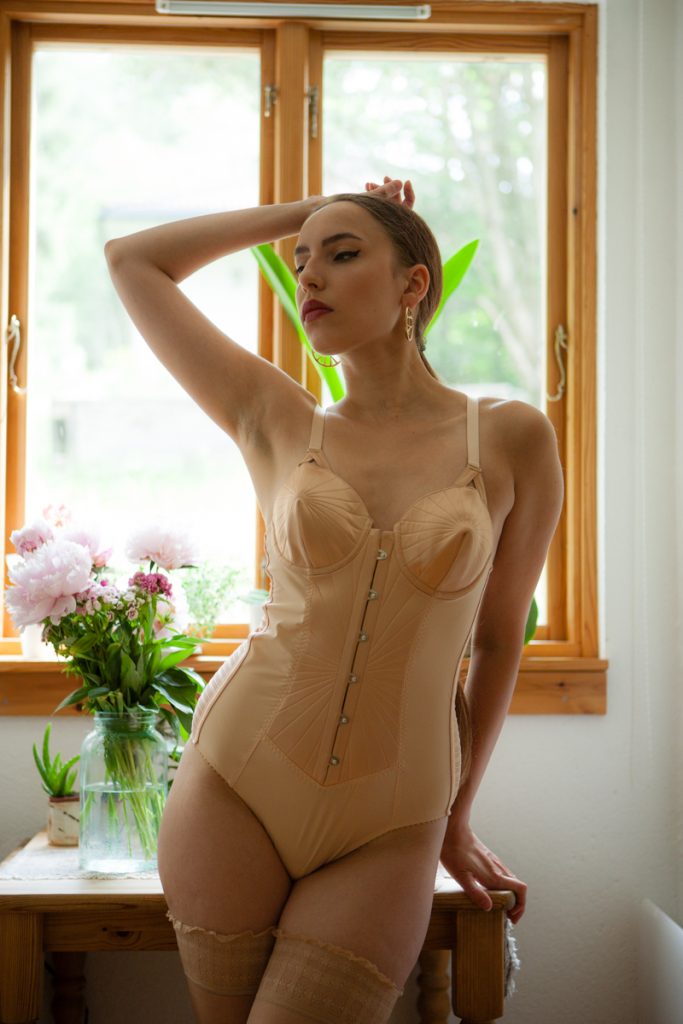 The Surpiqué range is based around graphic quilting embroidery. Although some of the pieces in this range feel a little pedestrian (indeed when I first got my hands on one of the bras in 2012, I was disappointed by the fabrics and details), others are incredibly striking. This bodysuit’s pointed cup shape and centre panel are supported by this dramatic stitching detail.

The original range also included a padded hip harness and shoulder pad bra, most likely as a nod to the foundations of the late 1940s Dior’s ‘New Look.'  The dramatic silhouette of this fashion era required extensive padding that these pieces would have been perfect for. I remain slightly heartbroken that I’ve managed to miss these items and dream of adding them to my collection. 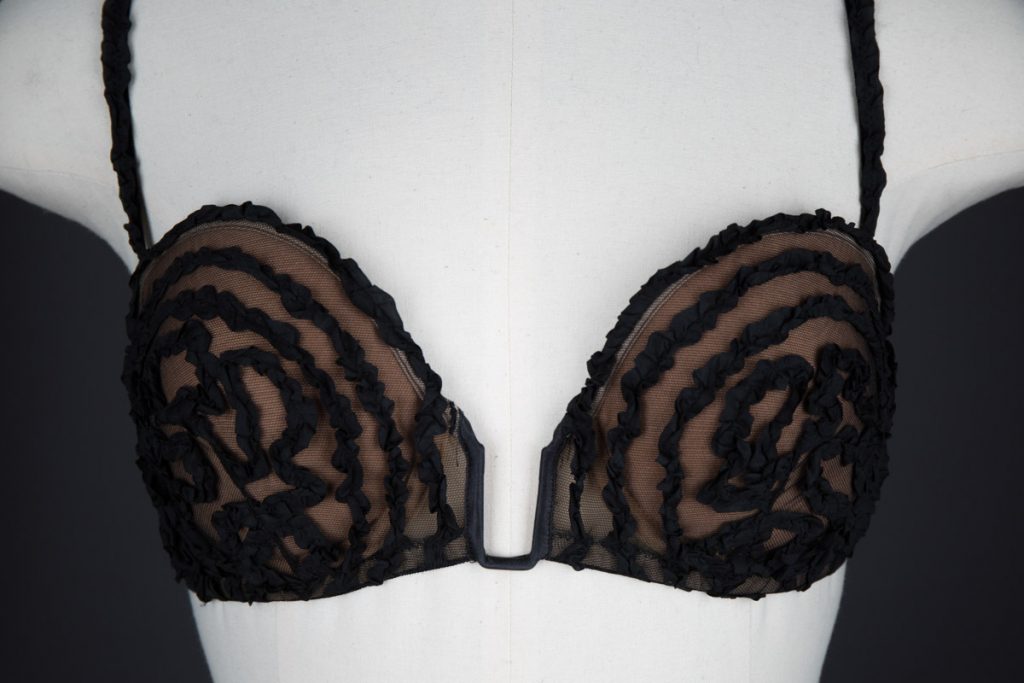 ‘Rubans’ was part of the final collection released in 2013. The range is characterized by its intricate freehand silk ribbonwork over a base of fine tulle. Alongside the organic ‘squiggle’ patterns, the ribbons form intricately textured rosettes and floral motifs.

As with the soutache of the ‘Feuillage’ range, I struggle to get my head around this embellishment technique being used in a factory production run. The skill and accuracy of the workers leaves me in utter awe. 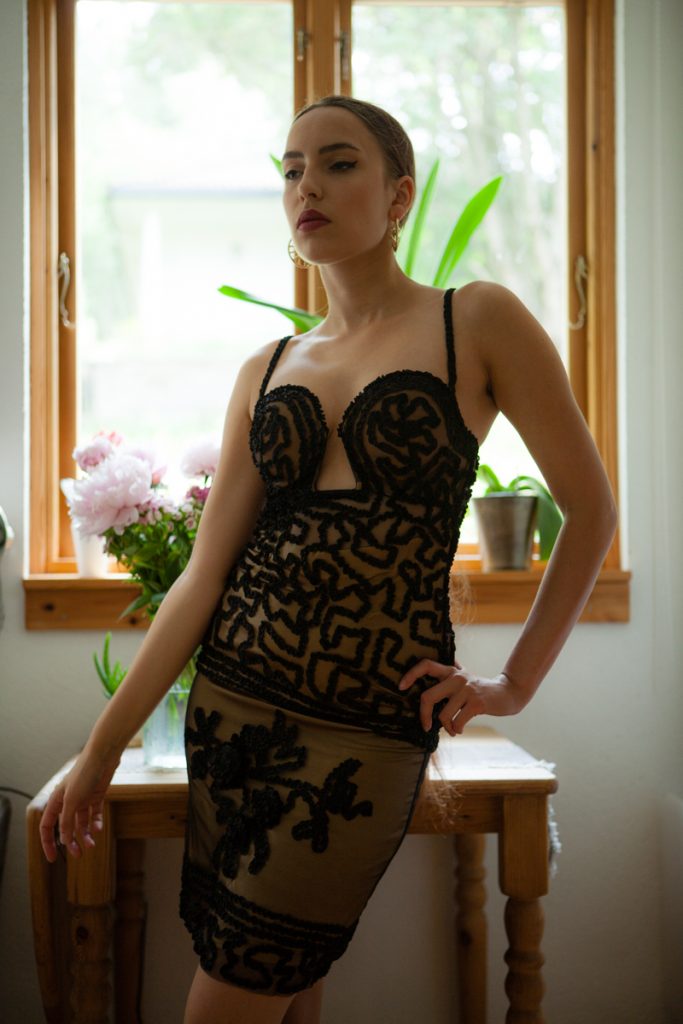 This contour dress was featured on the catwalk at Gaultier’s SS13 haute couture show, which perhaps shouldn’t come as a surprise. It’s one of my all-time favourite lingerie pieces, incorporating overwire inspired bra cups (created with molded foam rather than restrictive metal structures), layered sheer tulle, a detachable silk lining, and of course that layered fine tulle and exquisite ribbonwork. It’s a design that perfectly straddles the border between underwear and outerwear…arguably too beautiful to hide away beneath clothing.

It’s a truly rare thing for a lingerie collection to have this strong a hold on me so many years after its release, and it breaks my heart a little that we’re unlikely to see anything like it again. I may be disillusioned by so much time in the industry, but I also feel as though the late 2000s and early 2010s were a time of unparalleled creativity in risk within the lingerie industry (think Strumpet & Pink, Damaris and Lascivious).

Sadly all of that creativity happened in the economic bubble before the recession hit, so it shouldn't be a surprise that in times of economic uncertainty businesses look to minimise risk and stick to what they know will sell. It’s an unlikely hope that La Perla will rediscover the magic of these earlier collections, but one can dream!

If you’d like to learn more about the La Perla and Jean Paul Gaultier collaboration, you can find more information and detailed photos at The Underpinnings Museum.