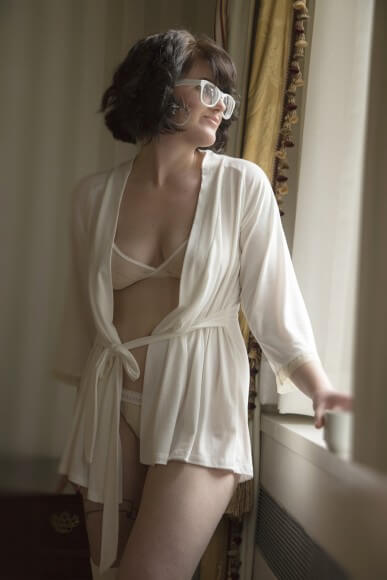 Lingerie by Between the Sheets. Makeup by Layla L'obatti. Photo by Kristen Blush.

In February I took the Chinatown Bus up to New York to do a lingerie photo shoot orchestrated by Sweets of Sweet Nothings, along with Elizabeth of The Breast Life and of course Cora. A few weeks after the fact I am still processing this amazing experience, thinking through what it means for me, how it felt, what I learned. So bear with me if I seem a little scattered: this was in a lot of ways a scattering experience.

First of all, it was such a pleasure to meet so many people from the lingerie world. I’ve been mostly engaging with designers and bloggers via Twitter, so it was a weekend of putting faces to voices. I spend a lot of time interacting with the people I met, from Jeanna (founder of Bluestockings Boutique) to Layla (owner of Between the Sheets) to Cora (editor of two years). While I could recognize these wonderful women from their images and their words, meeting them in person was still intimidating and still surprising. There are elements of charm and humor and force of presence that can’t really be conveyed in a photograph or a tweet or an article. And this got me thinking about representation, and how “representation” is a complicated topic when we talk about gender identity. It's even more complicated when we talk about lingerie, because lingerie is so personal and often not part of the picture we have of someone's public identity. 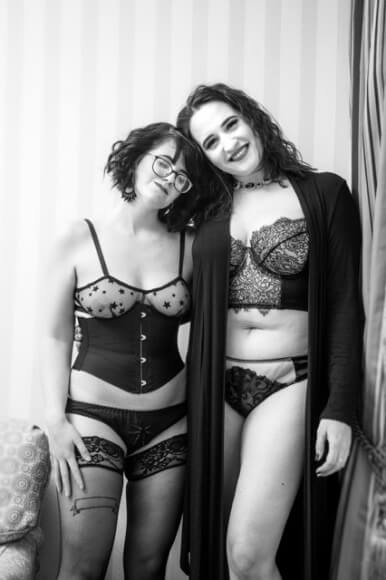 Sweets doesn't know it, but this is my "you're my new best friend" face. Photo by Kristen Blush.

The lingerie photos that I present to the world, generally, are very controlled. As a nonbinary person who has a body that reads as very “feminine”, I work hard to create images that show me as I see myself: androgynous, whatever that ends up meaning on a given day. When I take lingerie photos for The Lingerie Addict, I tend to either take the pictures myself, or heavily edit down from about 100 pictures to three that I feel show me the way I want to be seen. I also generally style and pose myself even if I’m working with someone else. 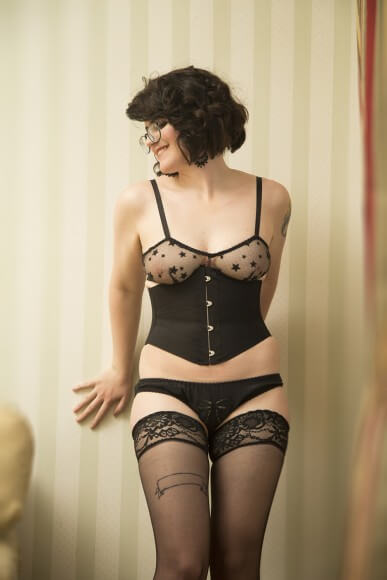 This is not how I normally style myself for photos, but I love it. Lingerie by Evgenia. Photo by Kristen Blush.

Doing this photo shoot was the opposite of that kind of control. Not that I didn’t make choices or have freedom, but someone else was responsible for my lingerie, makeup, and styling at each stage in the process. And then someone else (amazing photographer Kristen Blush) made the decisions about which photos came out well. Doing this photo shoot was the biggest trust exercise I’ve done in years: trusting that I would be okay if I let go of my usually-rigid control of every part of my image. It was a little scary.

“Gosh,” I said to Jeanna, the morning before the shoot: “I hope I’ll look queer enough.”

There’s a paradox in that phrase: look queer enough. It’s not as though “queer lingerie” is anything in particular, since an LGBTQ person can wear anything they want to. But at the same time, in a photograph, I find myself wanting to show that I’m part of a community, by signaling with visual cues my allegiance to that community -- so that in a photo shoot about diversity in lingerie, I’m not the one where people are like “what’s her deal?” And I also want to look like someone that people could identify with, where they could say “I’m queer or nonbinary and I feel better for knowing this person looks confident as hell in this picture.”

And so this photo shoot also has me thinking about the challenges of representation through images. On that day, I really wanted to get dolled up and look pretty in lingerie in a way that is very femme. Some days, that’s not the case. This image captures a moment, but it can’t capture the wholeness of me. And that's an expectation I didn't realize I was carrying around: that at any one moment, I should look visibly androgynous, so as to be a good representation. It seems like a bad expectation, given that on some days it's not how I want to be or feel. When presented with pretty lingerie on a day when I feel no dysphoria about the idea of wearing it, why should I feel guilty?

As the result of not feeling exactly like a girl, I often feel uncertain what my place is in a group of women. But I didn't feel that way here. The most wonderful part for me about this photo shoot was that everyone there was so supportive of the process. It was clear that I wasn't the only one who'd had (or still had) insecurities, but the room's general atmosphere was a happy one. Any time one of us went to take our solo photos, everyone else crowded around to ooh and ah and snap cell phone photos and generally be goofy. “Do you need us to leave you alone?” Elizabeth asked at one point. No, please don’t. 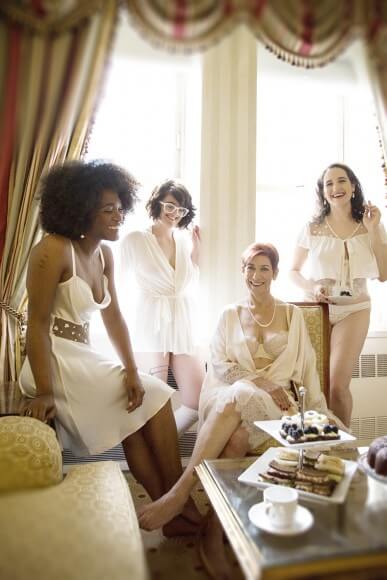 Look at these gorgeous people! Photo by Kristen Blush.

After writing about the lingerie community for so long, it was amazing to finally be surrounded by that community. Watching everyone look so good in their sets, posing all together with desserts that Sweets had made for us, joking with the photographer about her lace-trimmed socks (“I’m gonna start selling them in my store”, Layla warned); being part of the camaraderie was easily the best part of this experience for me. It makes me proud to be part of this group of lovely, supportive, smart and funny people who are brought together by their love of pretty underthings. I'm not going to say it makes complicated feelings simple, or makes any of my problems disappear. But it does make things seem a little simpler, thorny issues a little rosier.