What is Androgynous Lingerie, Anyway?

The Lake and Stars

I'll be honest: I'm fascinated by the idea of androgyny in lingerie. Androgyny (when we're talking about aesthetics) is defined as a blending of masculine and feminine traits, or alternately, as a point between masculine and feminine. But when looking at lingerie, how do you decide whether a look is androgynous or not?

As a Supreme Court justice once said about something completely different: "I know it when I see it." I know when a look I'm wearing feels androgynous to me personally. But it seems to me that it's more complicated than that. I know what I see, but if androgyny is completely subjective, how do I know I'm conveying it to other people? What signals to people that something is in that elusive middle ground between masculine and feminine?

In order to answer this question I'm going to get a little academic today. I think that the best way to tackle this topic will be to look at how the word is getting used on the regular by experts and devoted amateurs, and see if I can come up with a few theories on what it is that can make a lingerie look androgynous.

Much of the time, androgyny ends up being defined by absences. The "androgynous model" is often someone with no facial hair, minimal curves, no heavy musculature. To a degree, we "read" people's genders by running down a checklist of traits like these. Breasts? Probably female. Beard? Probably male. Both? Takes a little more figuring out. When we look at clothing, the ideas are more abstract. We look at fit, color, and design elements to get a sense of what gender the piece of clothing is oriented towards. 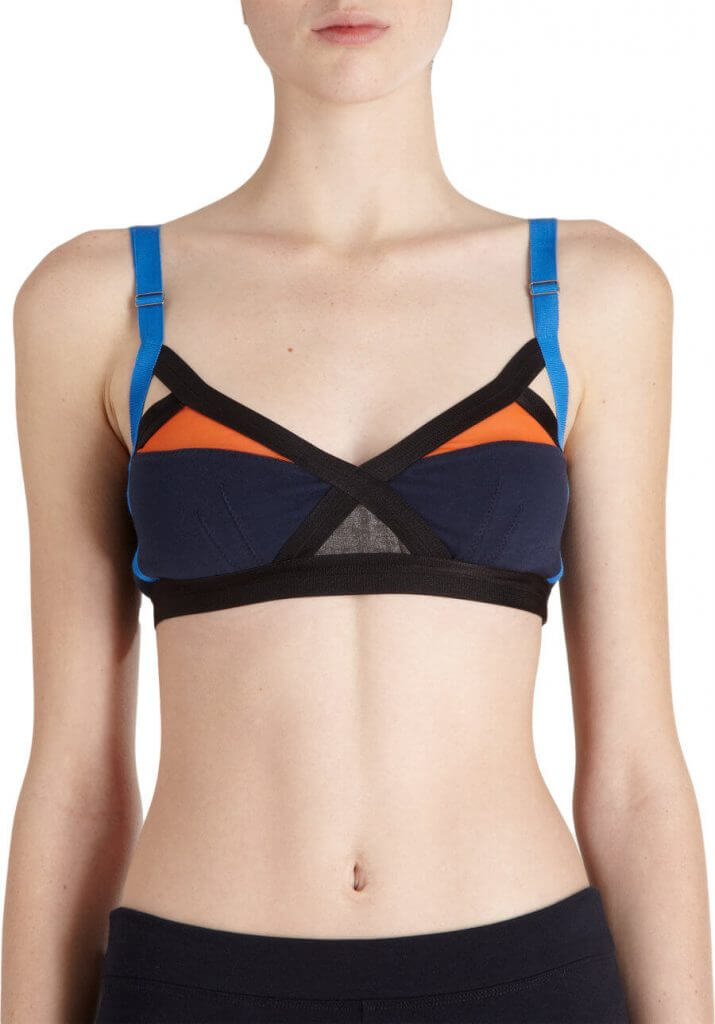 A VPL bra, featuring no overtly feminine detailing. Is this androgynous?

Caro, the blogger behind The Lingerie Lesbian, has put together a few collections of androgynous lingerie (For more examples, go here). Caro's selections are missing the gender indicators that you might find on more feminine lingerie: there's less lace, fewer of the "girly" colors, an absence of bows and ruffles that would normally send those "this is feminine!" signals.

These pieces certainly have an androgynous feel to them, but few of them are explicitly labeled as androgynous. Their androgyny comes mostly from not being strongly gendered. Similarly, last week I talked about Jenny Shimizu not wearing a bra at all: the bra is a very gendered piece of lingerie and a normalized part of the American female wardrobe, so skipping it is skipping a lot of gendered implications. 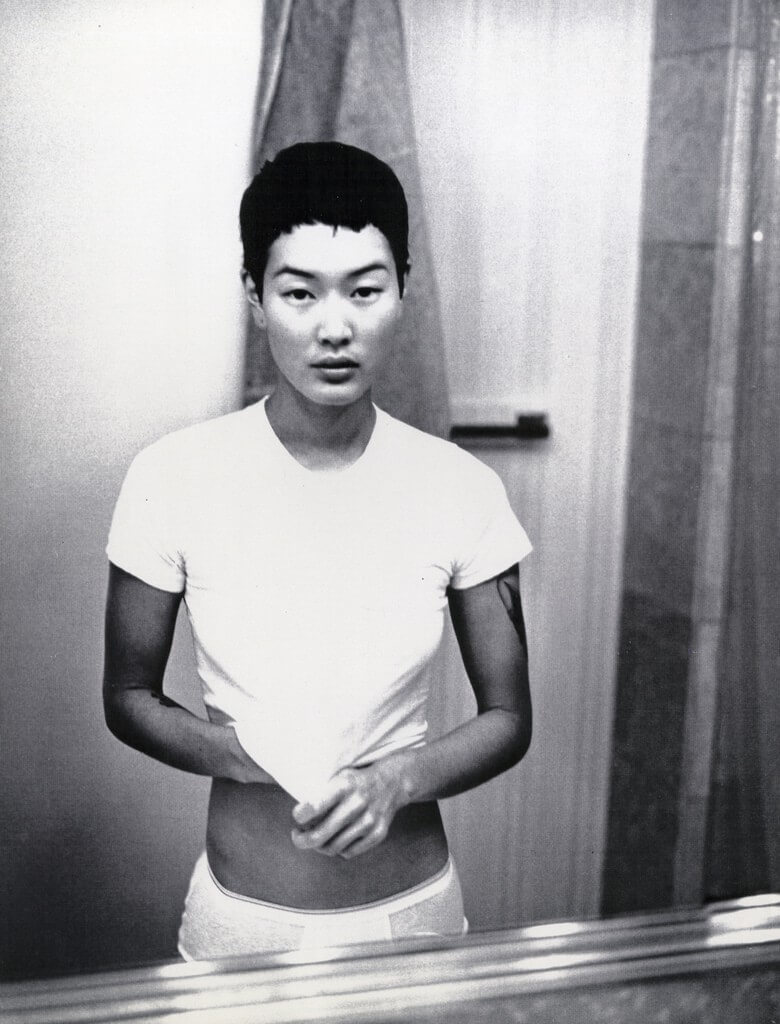 We see a more intense example of androgyny-as-absence in PlayOut's recent campaign with the flattoppers, a group of butch and masculine-of-center women who had radical mastectomies as the result of cancer. These folks have decided not to undergo breast reconstruction.

Melly, one of the women interviewed, has said that she has always been androgynous and that "My breasts never defined me, my identity or even my gender. I am not less myself without them, I am more condensedly myself". Other androgynous people sometimes create the appearance of no breasts for themselves through binders or compression bras.

Lingerie that doesn't do the traditional girly moves, or lingerie that downplays feminine-coded parts of the body, definitely is part of my definition of androgyny. But there's another way for lingerie to be androgynous, and that's by not just minimizing gender, but by counterbalancing it.

Brands often create androgyny in their lingerie by adding masculine elements to a garment intended for women (or more rarely, the opposite: some feminine detailing on a garment intended for men.) Play Out includes a thick, labeled waistband on their underwear (a typically masculine feature), which they pair with tropical florals and abstract prints which are less gendered. Other companies use contrast piping and Y-fronts on underwear cut for women in order to give it a more androgynous feel. 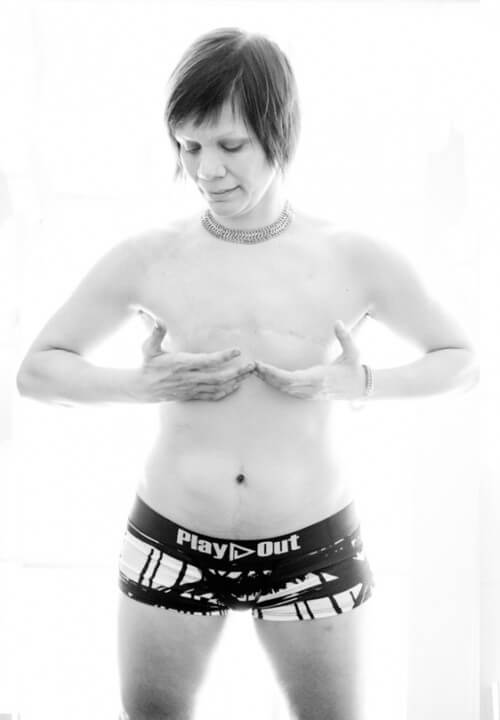 Masculine detailing on gender-neutral boxer briefs. Via Play Out.

But masculinity and androgyny are not the same thing. Some people will assume that if you're wearing all masculine underwear and happen to have two X chromosomes, that means that your lingerie look is androgynous. I don't think this is always true. Some masculine-of-center folks don't convey much androgyny in their looks at all: they look masculine, full stop.

I think that the exact tipping point between androgynous and masculine (or androgynous and feminine) is a matter of taste and consensus, but often for a look to be androgynous, the wearer has to be balancing elements. (If you're interested in learning how, Autostraddle has a fantastic article laden with options for incorporating masculine underwear into your wardrobe.) 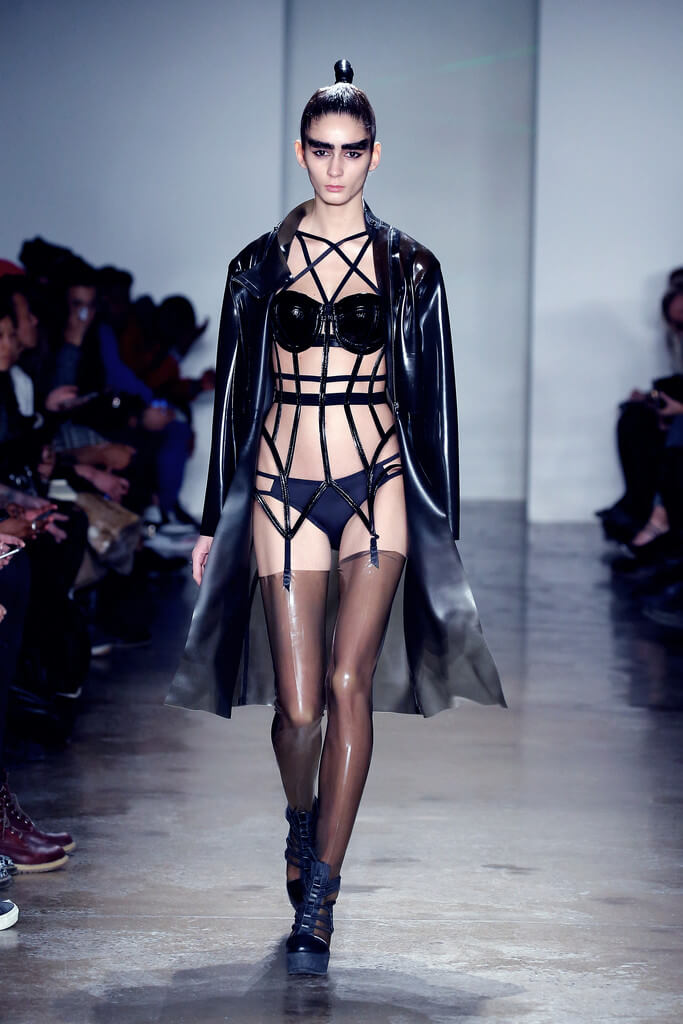 Masculine leather and eyebrows are balanced with stockings and garters: is this androgynous? Via Chromat.

I've seen this kind of strong masculine/strong feminine pairing used a good deal in lingerie. It turns up in photoshoots featuring leather and lace, or sporty boxers with delicate bras. I feel like this is a very strong way of looking androgynous because it's not just gender neutral: it introduces seemingly clashing elements and makes them work together.

Finally, the simple labeling of something as androgynous can create a kind of mental picture of androgyny. Over at The Lingerie Stylist, T. Kendall’s definition of androgyny in lingerie is all about labels. In an article entitled “Has Androgyny Gone Too Far?” she criticizes the bra brand Hema for using Andrej (now Andreja) Pejic in a 2011 lingerie ad. (Quick backstory for those who don’t know: Andreja Pejic rose to prominence as a male who modeled womenswear, then began talking about being “between genders” in interviews, and then came out as a trans woman in 2014.) Kendall isn’t buying this whole androgyny thing, and says, “when it comes down to intimates, should a woman be a woman, and a man be a man?” 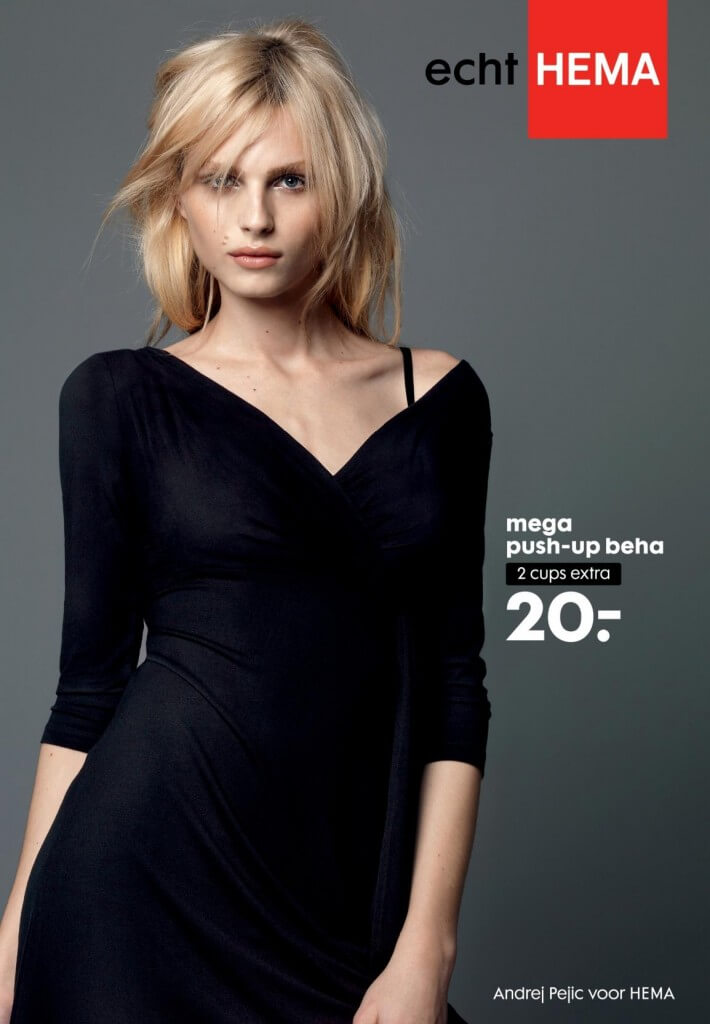 What’s interesting about that definition of androgyny in lingerie is that it relies not on the aesthetics of the lingerie or the look of the person wearing it, but on the label. As Kendall puts it: “Look at the photo above and you instantly swoon at this beautiful woman – the face of an angel and body to die for. Look again. For those of you not up to date on your model trivia you may be shocked to discover that this is male model Andrej Pejic.”

While Kendall is clearly not enjoying the androgyny, I think she may have touched on something real. Pejic’s original branding was as a male model, but in the Hema ads she looks pretty feminine: long hair, conventional makeup, feminine clothing. The “androgyny” of Pejic in this shoot comes mostly from that label. It's the “looking again” with that piece of “model trivia” in mind that creates this definition of androgyny.

This idea that labeling alone can create androgyny holds true for garments too. Think of “boy shorts”, which are often lacy, patterned, or otherwise coded very feminine, but have the word “boy” right there in the name. They feel more androgynous because the name conjures up images of boyishness. The labeling certainly works on me; my black lace “boy shorts” feel androgynous to me more because of the name than the style. 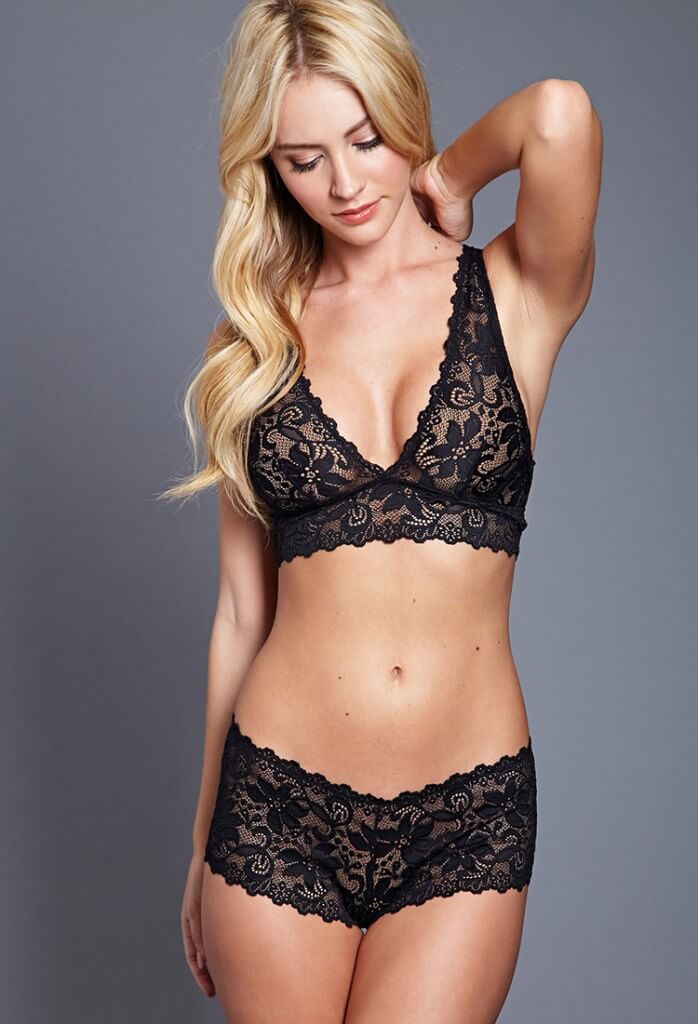 So What Is Androgynous Lingerie?

Androgyny, I think, is a constant negotiation that accounts for both your own desires and the expectations of your society. What's androgynous in one place may be feminine or masculine in another. For example, if you live in a country where bras are not the norm, not wearing a bra might not make you appear especially androgynous to the people around you. It might still make you feel androgynous, though, depending on your own experiences and the expectations you have about femininity.