How Lingerie Helps Me Deal with Gender Dysphoria 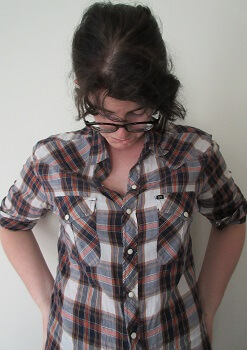 Dysphoria makes you make this face. All photos by Kat McNeal.

If you identify as genderqueer, genderfluid, bigender, or any of the terms that mean “not exactly male or female”, you’ve probably experienced dysphoria at some point. Dysphoria is the sensation of feeling like something is wrong or unsettling about your body, and for people who are trans or genderqueer, it can be a big deal. Luckily, your underwear can help.

I’ve struggled with figuring out how to handle gender dysphoria, since sometimes I'm fine with my body, but I've also had days where I’ve felt like I couldn’t dress myself or leave the house or even be seen by other humans. What’s worse, my normally excellent lingerie was betraying me. You might expect that, as someone who’s vaguely androgynous, I’d have some low-key women’s underthings, right? Nah. I like a pretty extreme demi-cup pushup bra on my girl-days, because to me “girly” means “basically Marie Antoinette.” My lingerie drawer is full of bows and stripes and padding and oomph. And that’s probably the worst thing for me on days when I wake up wondering why I have breasts at all, since in a bra like that they’re impossible for me to avoid.

To escape dysphoria, I tried wearing plain boxers and sports bras (always with giant baggy shirts, because heaven forbid someone see a bra line) because obviously “masculine” means “plain and boring,” right? That didn’t feel great either -- it worked, but I felt like I was hiding under clothes I hated. This probably would have gone on indefinitely, except that a trans man I admired for being both stylish and manly said to me that he loved fancy, “girly” things, and that it was okay (thanks, man!). So I started accruing some better male pieces, and almost overnight, it became easier to dress myself and feel good on days when I didn’t feel female.

Now I have an underwear drawer that’s stocked with underpinnings for whatever gender presentation I might need on a given day, which are all up to my standards of visual interest and fit. The basic toolkit may vary from person to person, but here’s mine, along with some ideas about how to build your own: 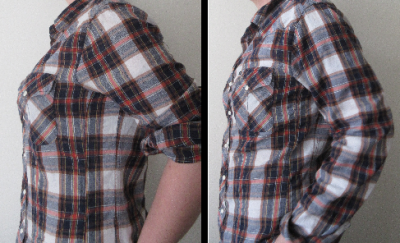 Without binder and with binder. Photo by Kat McNeal.

I didn’t like the look of most chest binders, and I still don’t--they often look like medical garments. But they do reduce the appearance of breasts to basically nothing. I tried one on for the first time recently, on a day when I was feeling dysphoric, and instantly looked and felt Right. As far as buying one goes, they usually run about $30, so you could probably try out a few different ones. I’m a fan of this one from Underworks for its sheer binding power. And T-Kingdom offers a few very attractive options, although they only carry up to a 42" chest size.

Honestly, the most attractive (while still functional) binders I've seen are homemade ones. There are several tutorials available, and these binders are usually just a band of cotton and elastic with a zipper.  I made the one I'm wearing above, which works fine for my 34C (sometimes D) chest and even has a little bit of that strappy look I'm obsessed with. 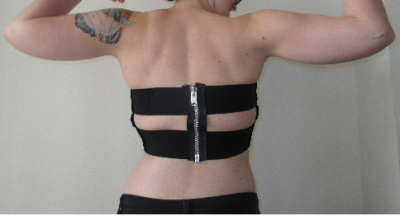 A warning to anyone considering binding: don't use Ace bandages, even if you like the aesthetic. They're hard to get in and out of quickly, they tighten as you're wearing them, and they can cause health problems including cracked ribs. Use something you can take off in a hurry if you're having trouble breathing! 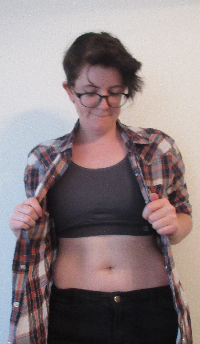 The less extreme option for reducing the appearance of breasts. Again, I tend to like black and strappy, on the off-chance that someone might see it. Some sports bras advertise their “push up” properties; those are not any good for binding. Champion sells a good option for light binding here. If you're alright with something that looks like a bra instead of like a tight thing for your chest, there's an excellent post here about some very attractive sports bras. The ones with zip fronts seem to do a lot of flattening work for you. 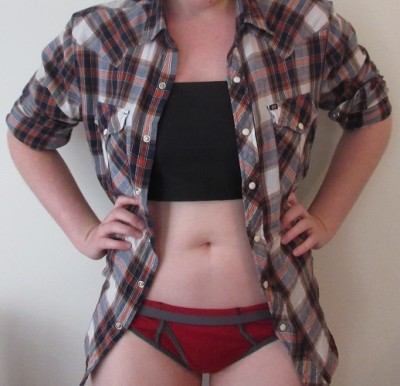 I don't know why more guys don't take advantage of the vast array of options they have for cute underwear. The Lingerie Addict has a great post here on sexy options for guys, which is definitely worth a read, but department stores and mall stores are an equally valid and plentiful option. Anything with contrasting piping makes me really happy, like these on ASOS, and goes a long way toward making me feel like a cute guy.

Close-fitting boxer-briefs or briefs are my go-to, since boxers often just make me feel like a kid in too-big clothes.  Target also makes amazing boxer briefs in any pattern you could want, including s’mores patterned ones. I sometimes wear those as bike shorts under my dresses sometimes, because they’re cute and comfortable even when I’m not dysphoric. 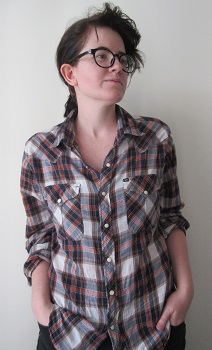 Freed from my boobs, I stare moodily into the distance.

With these options (and some men’s novelty socks for good measure), I usually feel pretty masculine when I need to. And sometimes I combine them oddly: I might wear a binder and cute lace underwear, or a push-up bra and men's boxer briefs, if that's what makes me feel right. If you're experiencing dysphoria, especially if you're not sure it's as clear cut as "I'm a man" or "I'm a woman," I encourage you to go with your instincts and wear what you want to wear, rather than what you think a person with dysphoria "should" wear. That's not a thing, I promise.

Other genderqueer people (and butches, and FTM gents): I'm here for you, whatever underwear you're wearing today. If you have questions for me, or tips for those of us still trying to figure this stuff out (me included), please let me know in the comments!