Fashion, Fatphobia and Finance: My Thoughts on 'Droptheplus'

By Holly Jackson April 27, 2015 in holly, personal, plus size 7 comments
Share this article 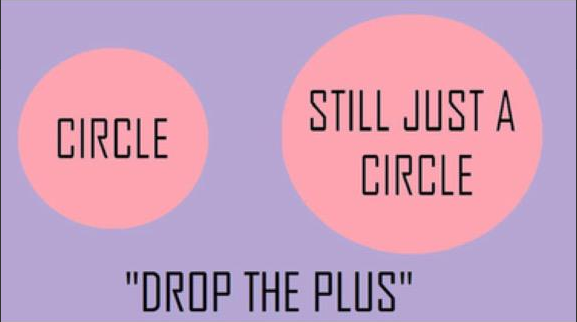 It's been a big month for plus size news! We've had the Lane Bryant #imnoangel campaign and the response to it and now the #droptheplus awareness campaign is taking over the internet. If this doesn't sound familiar, here are the basics: the #droptheplus campaign was started in Australia and aims to convince the fashion and modeling industries to stop using the term "plus size." In their ideal world, any model would simply be labeled as a model and plus size sections would be combined with standard size clothing sections in stores. #droptheplus argues that calling people "plus size" sets them apart in a negative way, so it needs to be removed from use.

There is an issue here with differentiating what fashion considers plus size from what the average person considers plus size. While a size 10 may technically be plus size, I suspect many women who wear a size 10 don't identify that way. A size 10 woman also wouldn't experience harassment, rejection and all of the fat shaming that comes with being a size 18+. It's notable that this campaign focuses on models who aren't really plus size -- even Robin Lawley says that she doesn't identify that way.

I can't tell you how many conversations I've had with people who say "I'm technically a plus size, but...". When someone says that, I tend to hear something that sounds more like "I totally support plus size people, but I'm not fat like they are." The idea of "acceptable fat" is alive and well in our society. I would argue that all of the women at the forefront of this hashtag are in the "acceptable fat" category, who may not have the same experience as those women at the larger end of the plus size range. Having been thin, "acceptably fat" and legitimately plus sized, I can assure you that it's a very different experience in each weight category.

Setting all that aside, this campaign is such a beautiful and simple idea: surely we can live in a world where people can just be people, right? Sadly, I'm not sure the world is really there yet. My own experiences tell me that despite all the ad campaigns telling us that plus size ladies are just as gorgeous as ladies of any other size, society in general just doesn't agree. Today I'll be talking about three big reasons I think this campaign may be far further along than society is, but I'll also cover some ways to help further the goals of the campaign that anyone can accomplish on an individual basis.

1. There's no alternative term.
Yes, the term plus size is frequently used in an insulting way. It's also a way to describe a clothing store department, just like petite is used to describe a section of clothing that is built for smaller people. It would be great to have a neutral term that we could use to apply to this section of the store, but no one can seem to agree on one. I've seen "curvy" suggested, but that has its own problems -- curvy is a shape, not a size range.

2. Women with larger bodies need different tailoring than women with smaller bodies.
Larger women aren't the only ones with this concern -- it applies to muscular women, petite women and tall women as well. While I have the advantage of being able to wear a larger version of a standard dress at a size 14, a woman who wears a size 24 needs a dress that is built completely differently. One of the major complaints about plus size clothing and lingerie lines is that not enough thought goes into the way clothing fits on larger bodies to start with, so taking away that point of differentiation will exacerbate the issue.

3. Making "plus size" less visible out in the world may undo progress that has already been made.
I feel like this campaign assumes that things are really getting better for plus size women, not just in fashion but in the way they're treated in general. Let's not sugarcoat the issue: while "plus size" is a problematic term, most of the problems with it come from society-wide hatred of fat people that is both visceral and truly frightening. Over the weekend I read an article that fat women have a harder time having children - in part because no one would be willing to have sex with a fat person. Fat women are harassed in stores, on the street, at work and by families and friends. Yes, "plus size" is a problem, but the real problem is that many people don't believe that fat people deserve to be treated like human beings. In getting rid of a labeled plus size section, we'd be moving one step closer to helping plus size women disappear altogether.

So What Can We Do To Make Things Better, If We Can't #droptheplus?

1. Patronize stores and brands that cater to a wide range of sizes and don't divide them into plus or standard size.
Admittedly, this is easier if you're willing to shop online or live in a city with good boutique options. This is really a version of my much-repeated advice when it comes to lingerie and fashion: spend your money with companies whose policies you respect. If you want to get rid of plus size clothing sections, don't shop in stores that have them. If there aren't any local options that treat all sizes equally, shop online with brands that do. If companies saw a serious shift in profits that came from treating larger customers well, they'd be more motivated to actually do it.

2. Think about how you feel about your life and the terms you want applied to your body. Articulate your preferences and become part of the conversation.
While I see "plus size" as akin to "petite" in a fashion context, I know that probably puts me in a minority. #droptheplus has been invaluable as it's started a conversation about what terms plus size women identify with (which may be different than someone else's terms) and what terms would be better for the future. Smart retailers will be paying attention to this kind of thing and using it in future advertising cycles. Having the conversation publicly raises awareness, even when people disagree.

3. Be aware that companies make decisions based on financial factors rather than on feel good factors.
Big companies have shareholders who expect profits. While campaigns like #droptheplus are great for awareness, lingerie and fashion companies won't change anything until their bottom line suffers. Vote with your money. Don't buy plus size items that are badly made and named insulting things. Speak out on social media so companies know what they could do differently to earn your dollars. Save up and buy a slightly more expensive item from a company that actually respects women of all sizes rather than a cheaper item from a company that sees them as an afterthought.

I applaud #droptheplus for bringing this conversation to the forefront of the internet lately -- they deserve tons of credit for standing up for women of all sizes. Unfortunately, like many conversations, this one is complicated and can't really be simplified down to a hashtag. Until we address the financial factors that motivate change as well as the pervasive fat phobia that society suffers from, it will be hard to see any lasting change in the way fashion companies treat larger women.