Orchid Corsetry was a brand I very much admired when I was just beginning to come into my own as a corsetiere, when they were going by "Desert Orchid." This year their "En Plein Air" collection encompasses not only craft corsetry (handmade in Shropshire), but also lingerie stylings of bras, panties, and harnesses.

Though corsets are technically a type of lingerie, in most cases they are made by a specialized corsetiere and the craft bears more relation to tailoring or even millinery than typical lingerie construction. Increasingly, however, I am noticing corsetieres branch out and develop RTW garment or lingerie options to match their styles... or skilled lingerie designers turning their hand to the specialized art of corsetry. 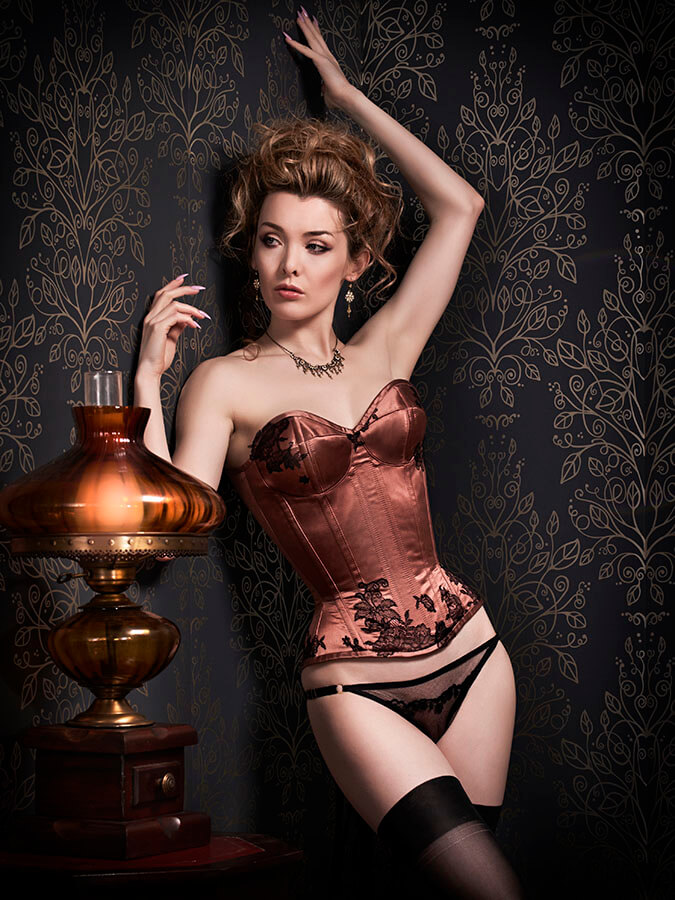 Orchid's En Plein Air collection features four lingerie sets. Each set is available made-to-order in two color ways, particular to each set. The collection also capitalizes on the ongoing strappy trend, utilizing it not only for aesthetic purposes but adding extra adjustability on bra bands and the hips of panties.

Of the four sets, three feature bralettes and one a structured bra (sized 30-42) with a foam cup. The bralettes are recommend for "self supporting" breasts, up to about a UK D-cup (which is much smaller than the widespread American perception of a D-cup). The collection also really benefits from actually being designed as looks and shot as a collection with a cohesive lookbook, which is an investment few corsetmakers manage as it is very expensive and labor intensive to do so.

As shot, the corsets aren't showstoppers - rather, they support the overall looks styled. Each piece is fairly simple with a small detail here and there to coordinate with the corresponding lingerie set. Orchid Corsetry does not have a standard fit line of corsets on the site, which suggests that each piece was custom made for Miss Miranda, though it's possible Orchid instead developed an in-house standard sample size.

The shaping is very moderate, though I know designer Bethan Billingsley has the ability to fit exceptional curves, making her work valued amongst serious waist trainers. In fact, it was her demonstrated mastery of the cupped rib silhouette that first drew me to her work six-ish years ago. Nonetheless, the construction and fit shown is lovely, particularly the bias applique on the "En Régate" 12-panel underbust.

Clouds: Bralette (£80, S-M-L) and panties (£60, S-M-L) available in Dove Grey or Damson (Plum). Shown with waspie corset. I adore a soft grey but I must confess I find halter styles to be uncomfortable and therefore impractical. If you look closely, you can see the bralette "band" has two slender horizontal straps, which is a nice touch that neatly echoes the strap of the panties. All the panties from the "En Plein Air" collection are both pretty and yet very wearable. The texture of this lace is both pretty and slightly unusual. 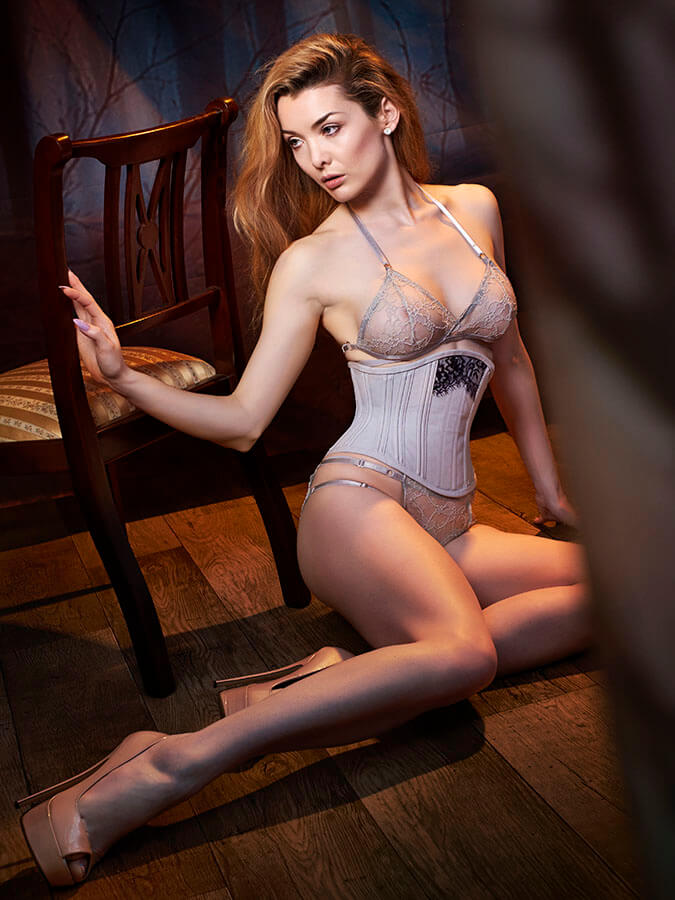 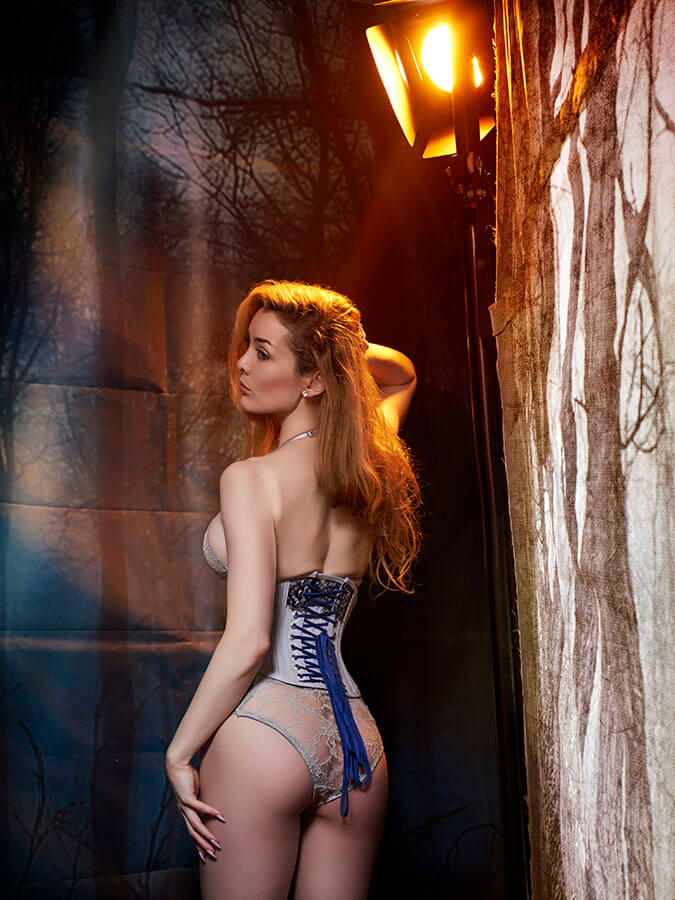 Midnight: Bralette (£90, S-M-L) and panties (£70, S-M-L) available in Navy or Ivory. Shown with ribbon corset. I have to confess I find this particular execution of a ribbon corset to be a bit underwhelming - the shape is downright mild, though I appreciate the combination of matte and satin textures. From the front, this bralette and panty set is my least favorite; the proportion doesn't seem to quite hit the mark and the print is busy for my taste. The back view, however, I very much like: the criss crossed straps and simple lines of the high waisted brief are immediately eye-catching rather than overwhelming. 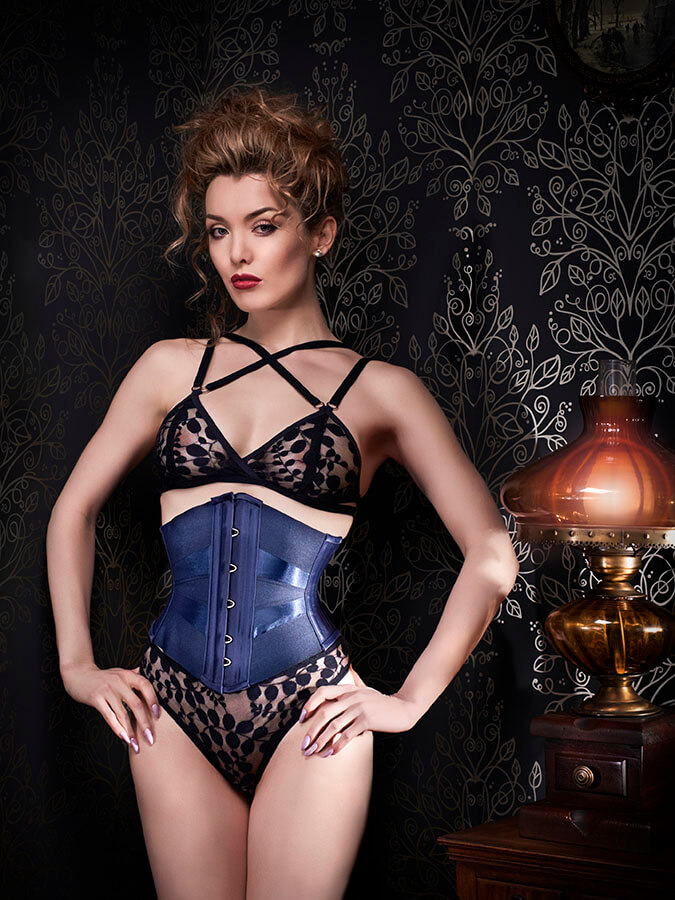 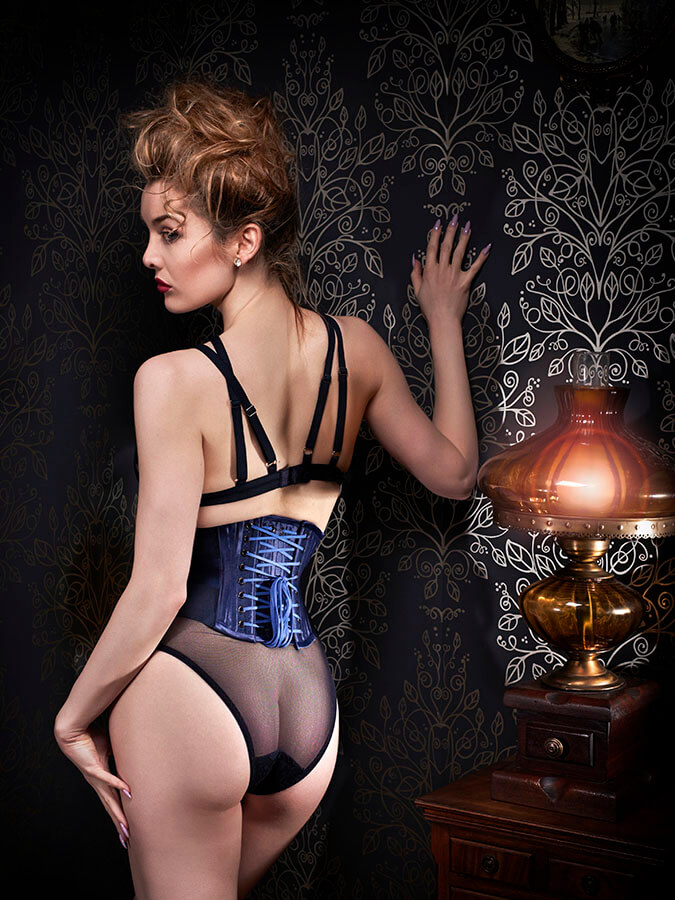 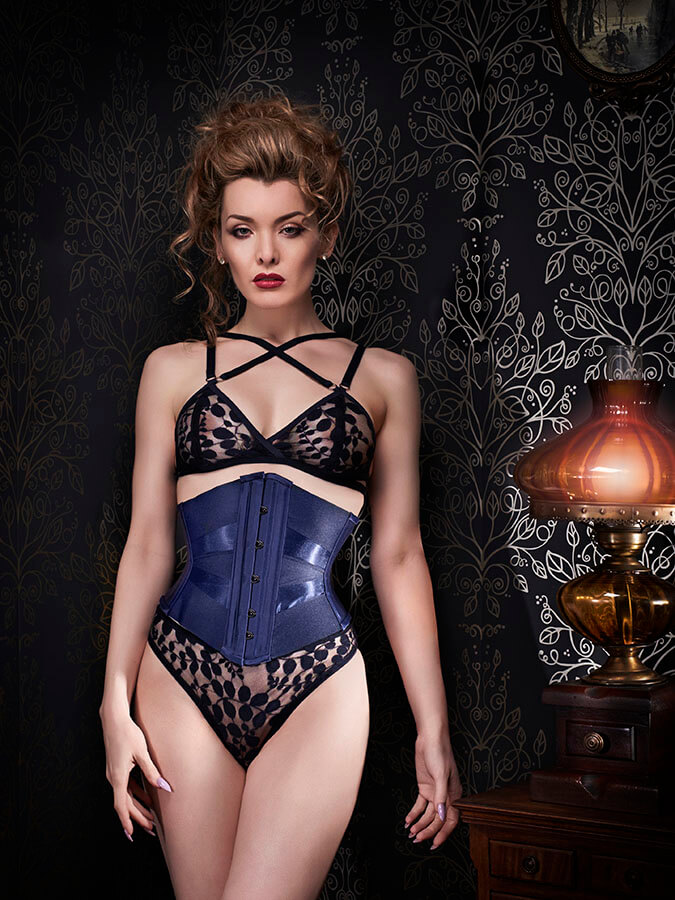 En Régate: Bra (£120, 30 through 42), panties (£80, S-M-L), and harness (£50, S/M or M/L) available in Black or Ivory. Shown with 12 panel underbust. Featuring the only actual fitted foam-cup bra, with a 3-piece fit to the silk outer, it's no wonder En Régate is one of the strongest looks shown. It's also the only look with a harness -- I wish there was a photo that showed the bottom and/or back of the harness. At a glance, it looks as if it's attached to the bra, which is not the case. I also find myself wishing that the strap slider detail was symmetric. The panties apparently have a mesh back (not shown). Aesthetically and functionally, I like the adjustable hips on these panties. Again, these panties are pretty in a way that doesn't make them impossible to actually wear under your clothes.

Dusk: Bralette (£95, S-M-L) and panties (£70, S-M-L) available in Black or Ivory. Shown with 12 and 14 panel underbusts, respectively. This look is one of my favorites, especially for the back of the bralette, which is almost like a strappy racer-back. I'm not sure I understand the need for a slider on the cup strapping -- perhaps it raises the center front of the bralette, based on comparing the adjustment of the black and ivory sets. The corresponding panties are simple, pretty, and versatile. You can also seem them above with the russet cupped corset -- a color choice, by the way, which echoes my corset trend predictions made at the beginning of the year. In black, this is the one look where I feel like the corset is the centerpiece, from the delicate texture of the lace overlay to the wonderful line and proportion of the attached garters. I would love to see that garter shape turned into a separate garter belt to continue the "Orchid Intimates" lingerie line. The ivory corset features instead a floating lace applique, which again has a lovely weight and proportion to it. 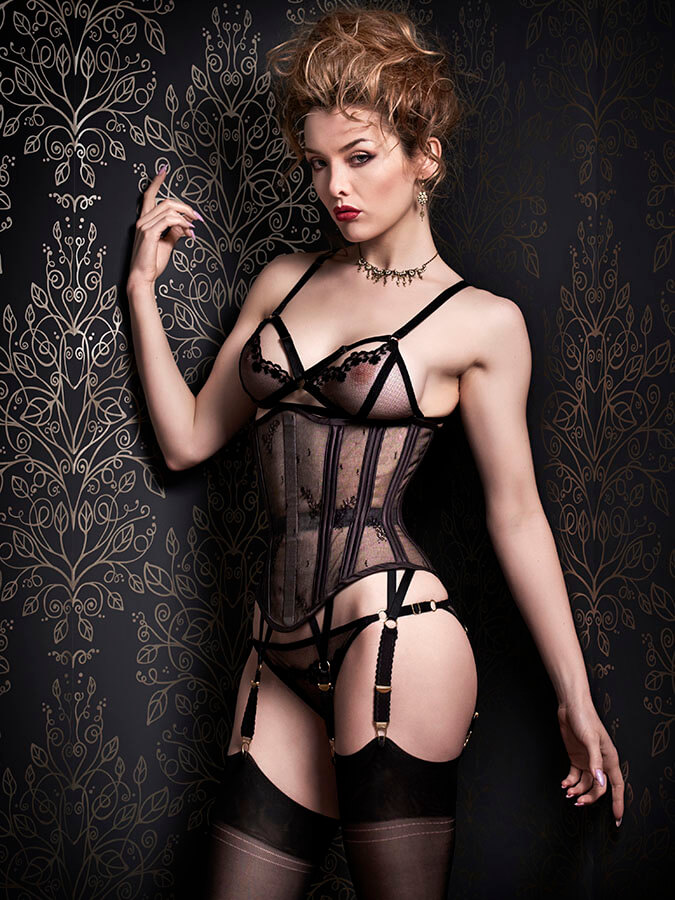 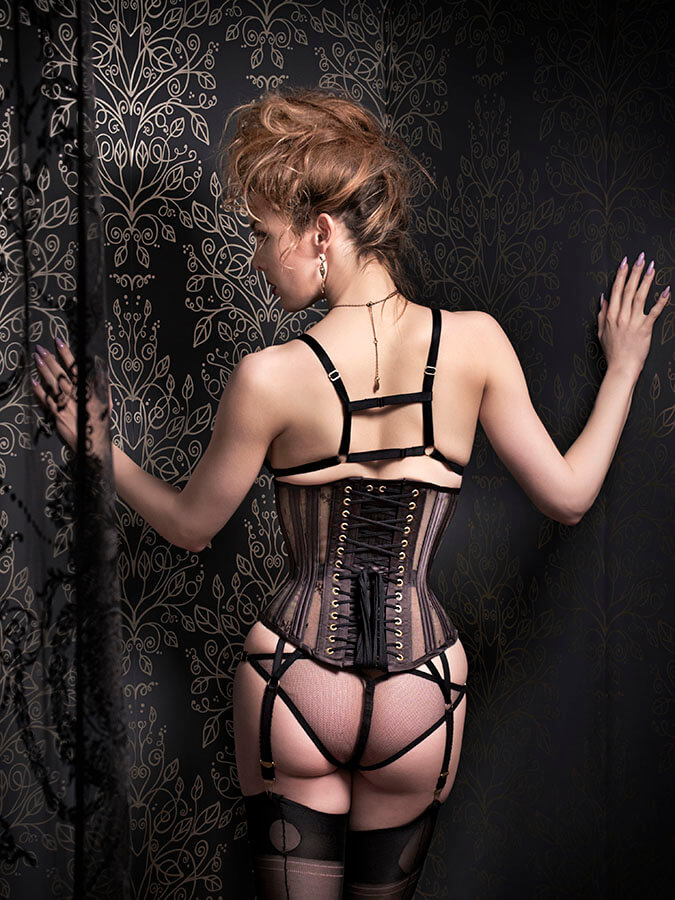 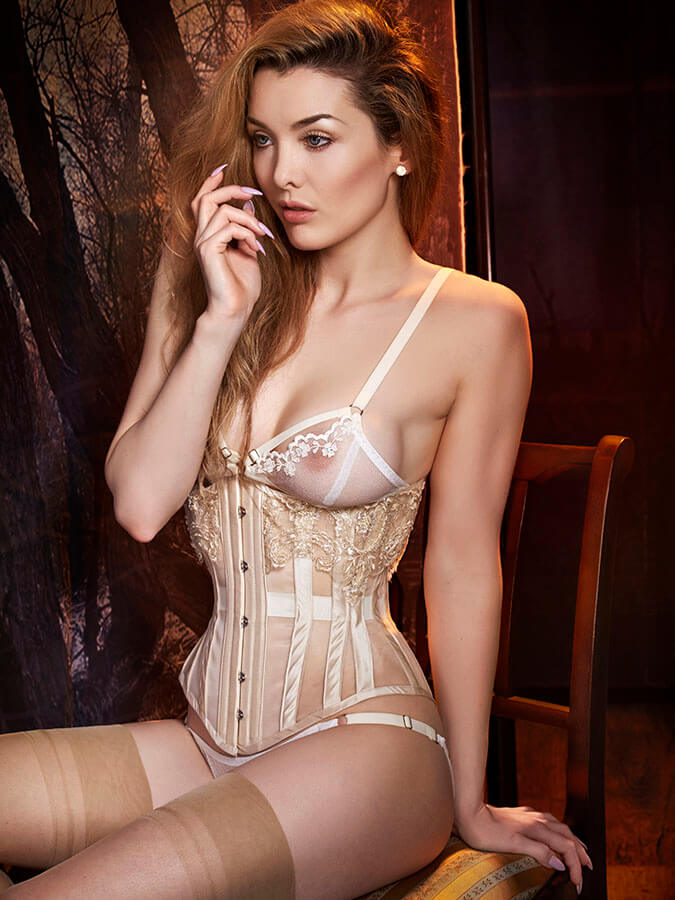 Have you tried Orchid Corsetry before? Which look from the new collection is your favorite?