Diversity in Lingerie: Why I've Been Scared to Talk About Diversity Lately

Diversity in Lingerie: Why I've Been Scared to Talk About Diversity Lately 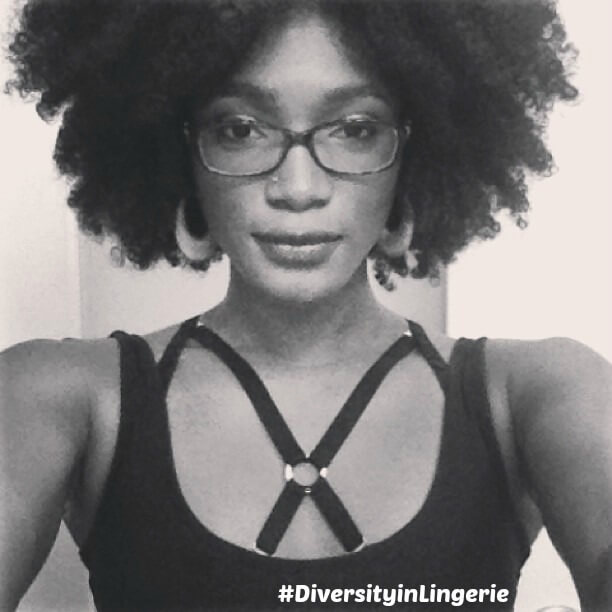 Earlier today, June of Braless in Brasil launched a Diversity in Lingerie campaign. It's all about bringing attention to the lack of diversity in the lingerie industry, and in addition to posting a picture of themselves with the hashtag #DiversityinLingerie, bloggers are also encouraged to write a post on what diversity means to them.

My thoughts on the absence of diversity within the intimate apparel industry are no secret; I've both written blog posts and published guest posts from others on the subject, and I felt it was important to participate in this event because diversity is and always will be a subject close to my heart. However, as the deadline approached for getting my post up, I found myself struggling with what to write. At first, I was confused. After all, I have no shortage of things to say on this particular topic, but then I realized... over the last year or so, I've become afraid of sharing what's on my mind. Put another way:

Diversity is one of the most important subjects in the lingerie industry to me right now, and yet I'm scared to talk about it.

This fear didn't happen overnight. In fact, I don't think I even realized it was happening at all until I started writing this post. Nevertheless, when I look back over some of what's happened the past year, I began to see how and when and why I let myself get here. There wasn't one major, disruptive event. No, it was a series of tiny occurrences, of small happenings that gradually undermined my resolve to be that person who talks about diversity.

My conception of diversity is a broad one. It goes beyond dress size or bra size or "curviness," and includes greater representation of older women, trans women, women with disabilities, women of color (including biracial women), women with muscular/athletic body types, and plus sized women (I'm thinking especially of women who wear larger than than a size 16US or so). In short, it includes those women who are all too often marginalized, neglected, or outright ignored in almost every conversation about lingerie.

Because my perspective on diversity differs from what's popular right now, the responses I've gotten have also differed from the norm. In the past year, I've been called "angry," "aggressive," and asked to stop making people "uncomfortable" for writing about diversity. I've been told that being black is just like being goth, having stretch marks, having broad shoulders, having large breasts, having small breasts, having tattoos, or having piercings. I've been told that my blog "harms women" because it focuses on issues other than bra fit. I've been accused of "crying racism" for talking about cultural appropriation and of "ignoring important issues" for writing about ethnic stereotypes. I've been told I talk about diversity "too much," and I've been called "nonsensical," "dumb," "dogmatic," and "disappointing" for having the audacity to suggest that the conversation on diversity is at least as important as the one on bra fit. And those are just the public remarks made in my own comments section, on Twitter, and on lingerie forums from other lingerie bloggers, lingerie brands, and lingerie enthusiasts. If I started talking about the angry ALL CAPS messages I've received in my inbox, we'd be here all day. But all that together makes me wonder... if one post on diversity every once in awhile is enough to elicit that kind of response, what would happen if I dared write more?

I'm not saying all this because I want sympathy. I'm saying it because I think it's important to understand that there can be a very real, very distressing penalty for daring to talk about a version of diversity that includes race or gender or sexuality... a penalty that is nonexistent for other, more popular issues (like size). When you're a member of a minority group, you're not only slighted by that initial lack of representation, you're also marginalized again and again by all the people who communicate, via words and actions, that "more diversity" doesn't really apply to people like you. When a website is unafraid to publicly say that issues affecting you aren't "real issues," it affects you. When a brand insists that other types of representation are more important than representation which applies to you, it affects you. When a blogger tells you that it's okay to feel strongly about one type of diversity, but that it's inappropriate or "upsetting" to have similarly strong feelings about other kinds, it affects you. And the ironic thing is that you become hesitant to even bring up this issue, because the very act of admitting that there's a problem is a problem in and of itself.

(Let's take a quick breather for a second. Get a sip of water and come on back.)

Of course, it's not all bad. I've gotten a lot of amazing emails from other readers and brands and other bloggers who were thankful that someone was "brave enough" to talk about an expanded notion of diversity. But the unspoken side of emails like that, the part that's only implied, is that it's really very frightening to be publicly pro-diversity. And when barely starting a conversation has this many negative consequences, it becomes even more important for that conversation to happen. It makes me sad that so many people are afraid to write on these subjects because the negative consequences would be too great. It shouldn't be like that.

While we're on the subject of negative consequences, this seems like a good place to mention the other part of this campaign... namely, encouraging lingerie brands to be more diverse in their selection of models. While the idealist in me would love nothing more, the pragmatist in me knows that brands suffer some very adverse effects when they use a model too far outside the mainstream. Lingerie brands lose when they utilize a model of color, a model with a muscular body type, a disabled model, or an older model in their ad campaigns. Stores refuse to pick up their lines (often with the excuse that the imagery isn't a good "fit"). Customers make fewer, smaller purchases. Press of all kinds --- from magazines to trade journals to bloggers --- becomes reluctant to talk about or feature images from the brand. And these detrimental effects disappear with the use of conventional models.

Diversity in Lingerie has to be about more than demanding diverse representation, it also has to be about promoting diverse representation. The lingerie community is incredibly homogenous, at nearly every level --- from brands to bloggers. When a brand takes a chance on a non-traditional model, there's a responsibility on us, as bloggers and members of the media, to help ensure that brand doesn't suffer for doing so. This is absolutely an instance where being silent and passive contributes to the problem. And though I've been open about this both here and on my social platforms, I want to say it again... if you're a designer from an underrepresented group or you're a brand using a non-traditional model, I want to know about you. Write to me. Message me. Tweet at me. In addition, at the bottom of this post, you'll find a list of lingerie brands and stores that have made diversity a core part of what they do. If you know of other names to add, please tell me in the comments.

This past year has brought some of the most exhilarating highs and some of the most crushing lows of my blogging career. On the plus side, I finally feel like I've found my "tribe" in bloggers like The Lingerie Lesbian, Fashion Pirate, Sweet Nothings, That Je Ne Se Quois, and Scarlet's Letter. On the negative side, I've struggled with feeling out of place as certain aspects of the lingerie community have made it clear that some forms of diversity are more equal than others. But I'm optimistic. I think there are more good things to come. And I like to think the #DiversityinLingerie campaign can be a part of that.

What are your thoughts on Diversity in Lingerie? Would you be interested in contributing to the conversation either on your own or on this blog? What does diversity mean to you? For more bloggers participating in the Diversity in Lingerie event, take a look at Braless in Brasil's blog post announcing it, and for more reading about diversity, check out the links below:

Brands That Use Diverse Models: