Diversity is More Than A Bra Size: What It’s Like to Be a Woman of Color in the Lingerie Industry 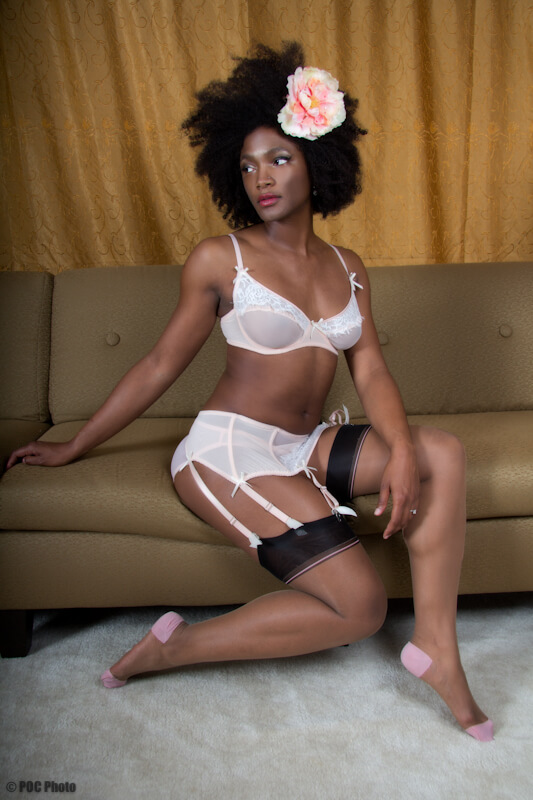 Today's post was really hard to write. I've been thinking about the things I'm about to say now for months, but it's only become clear in the last few weeks they urgently need to be said.

I never know which articles people see first when they visit The Lingerie Addict, and we get a lot of new visitors everyday. So I'm going to say a few things which are probably obvious to my longtime readers, but may be less obvious to visitors who are new or who don't come around as much.

I'm saying all that to give you a bit of context about who I am and the perspective I'm writing from because, for some time now, I feel like the conversation on diversity within the lingerie industry has been dominated by those who behave like diversity only matters along one axis, and that's size.

It's reached the point where the common refrain I'm hearing from bra bloggers, lingerie retailers, and even some of my own readers when talking about me or this blog is, "Well, you're a C cup. You don't know what it's like to be ignored by the lingerie industry." And as much as I love everybody out there, it it really takes a lot of self-control to not get upset when I hear comments about like that.

As I mentioned earlier, I'm a woman of color, but this isn't a blog about women of color. It's a lingerie blog. And so I'm shocked when people, who either didn't notice or didn't think about the implications of my being black, complain about how underrepresented they are. Because they're not seeing that almost everyone is underrepresented... including me, the woman who started the blog.

Though I've talked some about equal representation within the lingerie industry, I haven't written about this exact issue before because talking about race in America is hard. And I think it's even harder when you're a racial minority. As a person of color, you often feel like you're caught in a perpetual Catch-22. You can either avoid talking about your ethnicity (which effectively means pretending like it doesn't matter) or you can talk about it openly and deal with the blowback, which often includes stinging accusations like "crying racism."

The reason I'm bringing this up now is because, over the last year or so, I've watched the conversation on diversity shrink from one that was more inclusive of all women to one that only seems relevant to fuller-busted or fuller-figured women. I've seen so many articles and comments and blogs focusing on dress size and bra size and cup size, but next to none talking about other, equally important, issues like age, ability or, yes, ethnicity.

In a way, I understand why. People tend to talk more about issues which personally affect them, and, since the lingerie blogosphere is primarily made up of full bust and plus size bloggers, that viewpoint has become the dominant one. Unfortunately, a consequence of that is issues which aren't related to size keep getting pushed further and further down the priority list in the general lingerie conversation.

The responses to the Victoria's Secret article a couple of weeks ago really crystallized for me how much the debate on diversity has shrunk recently (no pun intended). One of the things I've always appreciated about Victoria's Secret's catalogs is that they include at least one black model. Now there's still a lot of work to do when it comes to the whole representation thing (call me when they're regularly featuring an Asian model or a model over 40), but that still puts Victoria's Secret decades ahead of the typical lingerie US lingerie brand, some of whom have existed for over half a century without using a single model of color in any context.

Don't get me wrong, I'm incredibly happy that plus size women, fuller busted women, and fuller figured women are getting as much attention from the mainstream industry as they are now. It's a wonderful thing, and I'm glad our notion of what is beautiful is expanding (again, no pun intended).

But the sad truth is I can go weeks at a time without coming across a nice photo of a woman of color in lingerie. And if we're talking older women or disabled women, it can be months. The same simply isn't true for fuller-figured or fuller-busted women.

And I wonder... if the comparative absence of plus sized bodies and full busted bodies in the lingerie industry has such a profoundly negative effect on women who are part of those groups, how much more so must the near-invisibility of women of color, disabled women, and older women have on those groups?

The fact that one kind of representation (in this case, size) is being treated as more important than other kinds is frustrating. And, if I'm perfectly honest, it's infuriating too. And here's why. And telling you this makes me tear up.

Even worse, we live in a world where women of color are afraid of bringing up these issues lest we be dismissed by the very industry we seek to be a part of.

The reason Victoria's Secret's models don't upset me anymore is because the entire lingerie industry is pretty much using the same model. She's always a young, white, able-bodied woman, whether her dress size is a 6 or a 16.

And I think what bothers me most of all is that I get so many messages from the plus sized and fuller figured blogging community insisting I need to do more for women "who look like them" (which I try to do), yet there's no such passion about doing more for women like me (or like some of you). We all crave seeing people resemble us. And it makes me sad that the "us" in this discussion has somehow become so one-sided.

The conversation needs to expand beyond just bra sizes again. Companies are getting praised for "pushing the boundaries of what's beautiful" when in so many ways, they've just repackaged the exact same standards in a slightly larger package.

We all need to be more invested in broadening our notions of what's beautiful. Diversity is more than a bra size.

What do you think? Is there something you're wanting to see more of in the lingerie industry that you haven't seen before? Have you run across an image that truly challenges our norms of what's beautiful? I'd love to get your thoughts in the comments.