Diversity Is More Than a Bra Size: What It’s Like to Be a Lesbian in the Lingerie Industry

Today's guest post is by one of my favorite new bloggers --- The Lingerie Lesbian. The Lingerie Lesbian is a 23-year-old recent college graduate who works in PR in 'real' life and spends the rest of her time thinking about knickers. She blogs about lingerie and sexuality over at TheLingerieLesbian.com. You can also see what she's up to on Twitter, Facebook and Tumblr and if you have any pressing questions, you can email her at [email protected]. 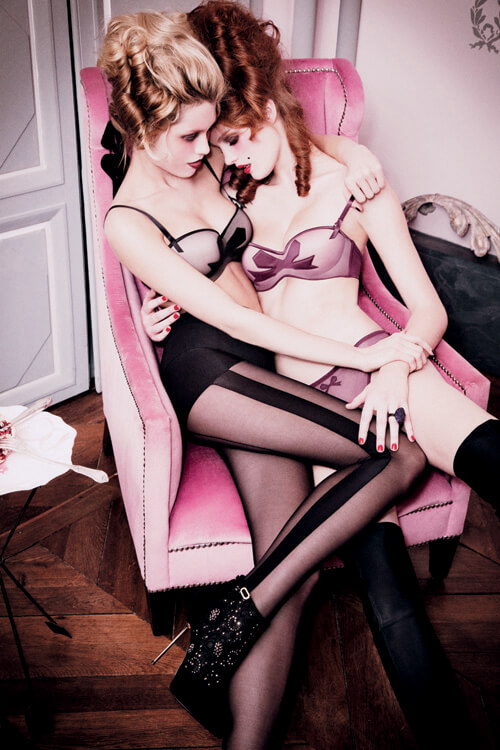 The funny thing about being a lesbian in the lingerie industry is that it feels like a paradox: I see versions of myself everywhere and nowhere at the same time. It’s undeniable that female homoeroticism plays a part in so many lingerie editorials, both implicitly and explicitly, that it’s not difficult for me to find photographs featuring both luxury lingerie and women in sexually charged situations with other women. What are missing are voices to match these images or the acknowledgement that these images are not merely fantasies, but could reflect a reality, my reality.

This is an issue that exists everywhere, not only in lingerie and not only in fashion. But in fashion, this complete lack of a queer female perspective can seem even odder than it might in other areas considering the way so much of fashion is tinged with sexuality. 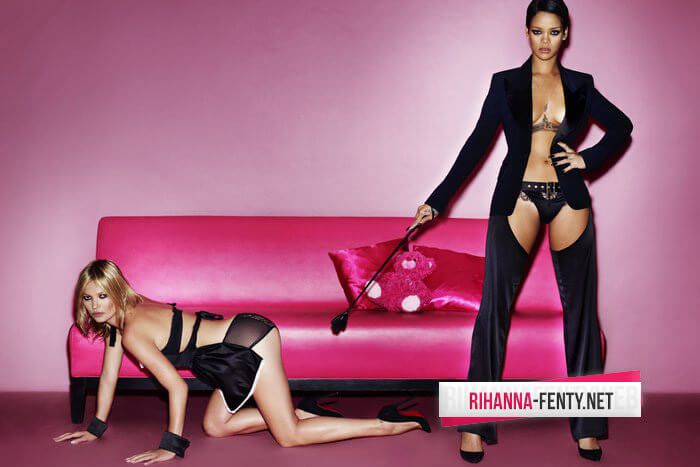 This recent shoot with Rihanna and Kate Moss for V Magazine is a perfect example of how the fashion industry views lesbianism — it’s about titillating the viewer, not about representing same-sex desire in a way that seems valid, relevant, or anything more than an act. And that lingerie plays a part in illustrating that this is a sexual situation means that in many ways it is the lingerie that is used as a kind of shorthand to create intimacy between the two women, even as they don’t even look at one another. All I can see is that my sexuality is frivolous — that it can be put on and taken off as easily as a piece of lingerie.

There is absolutely nothing wrong with showing off the sexy side of a same sex relationship — with lingerie, sex and intimacy are so often part of the equation. But when all you see are women as vibrant as mannequins, posing together “provocatively” the objectification of same-sex attraction cannot be ignored.

The lingerie industry is no worse (often better) than others — everyone I have interacted with has been nice and welcoming. So nice that usually when I point out places where there is particularly exclusionary language, they’ll apologize or change it. But it’s hard when I feel repeatedly forgotten --- every time I’m the one who has to raise my hand and say, “But, but, not all women are wearing lingerie for male partners!” or “You can’t assume that women want male attention!” And each time I see the phrase “girlfriend” meaning a close female friend I remember that of course no one would confuse that person with your lover because the default is always “straight.” 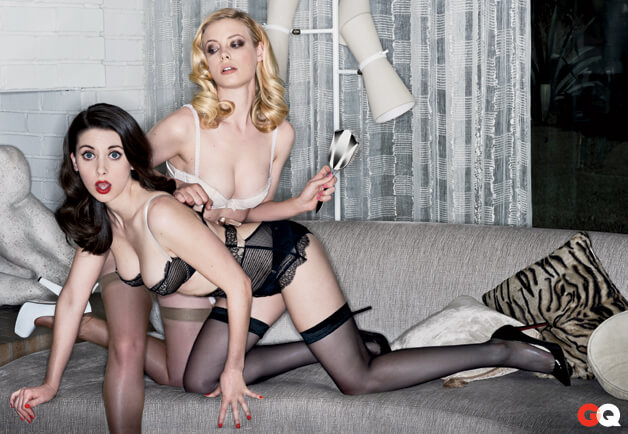 And then, of course, lingerie-clad women posing together provocatively do have a presumed audience: men. This editorial in GQ is the epitome of what’s wrong with many “lesbian” lingerie editorials. Lesbian sexuality is a joke (the accompanying headline is: “Alison Brie and Gillian Jacobs Did This Lesbian Scene for Us”), it’s entertainment and it’s coerced for the pleasure of the (explicitly male) viewer.

And my sexual identity is relevant to how I look at the world and the way I think about lingerie. Everywhere you look, lingerie, gender and sexuality are tied together and flow into each other. What you are wearing, how you want it to make you feel and who you want to share it with — these things are all part of understanding, appreciating and talking about lingerie. 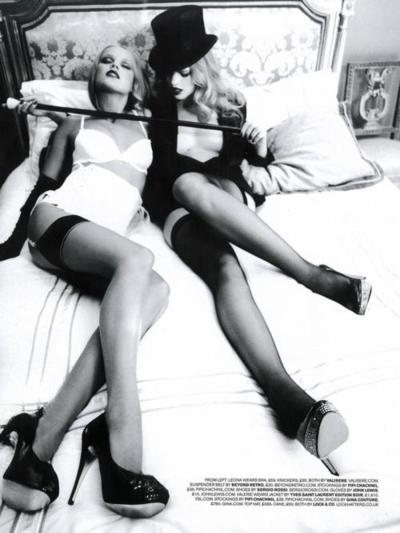 I often appreciate Ellen von Unwerth’s photography because even as she portrays women in lingerie, often in homoerotic situations, they seem more engaged with each other than with an unseen viewer (like in the photo above). But she can also fall into the cliché of using lesbian implications as mere titillation. Sexuality (just like lingerie) can be playful — the joy of playing infuses her better imagery and sets it apart from the stiff, mannequin-like expressions of her photo below and both the GQ and V editorials. They have a strange lack of animation that just seems to emphasize how unnatural these “lesbian” scenes are.

There are so many things I love about lingerie: the gorgeous details, beautiful fabrics, sexy shapes and inventive concepts. And there are so many ways in which wearing and discussing lingerie allows me to be very much myself. But I hope soon my life and loves will stop being a joke or an afterthought or an exhibition, but an expected, acknowledged part of the experiences of people. I’m very much an optimist; just in the last year or so things have improved — even lingerie retailers that used to be addressed specifically to men have recently embraced gender neutral language.

I see those homoerotic scenes of women in lingerie and I sometimes imagine that they are trapped in a box of soundproof glass so that no matter how hard they might try to speak, they are silent. Even as you may be able to see them as images of same-sex desire, they cannot be examples of any sort of identity.

While even an image of lesbianism is in some ways a step forward (and one I wish I could see more often), it’s not real until the viewer can imagine their voices and lives, not just as understand them as actors/singers/models who are being “provocative” and setting themselves up to be objects of desire, rather than desiring subjects in their own right. In an editorial that actually respected lesbian desire, the figures should be able to say (even simply with their bodies), “This is who I am. This is what I want. This is how I feel.”

For the creators of these images, lesbianism, like lingerie, is a temporary costume, and in the fashion world, it rarely gets treated as anything else. That’s why I couldn’t be just another lingerie blogger or lingerie lover — by saying, “This is who I am,” I am reminding everyone that I (and the myriad others like me) exist. I’m not interested in being silenced or being ignored.

[Note: this piece was inspired by The Lingerie Addict’s post “Diversity Is More Than a Bra Size: What It’s Like to Be a Woman of Color in the Lingerie Industry.”]