Rose is a gender enigma and lingerie enthusiast interested in how art, especially fashion, collides with social movements. S/he is working on a fantasy novel about queer youth (and is also a former columnist at The Lingerie Addict). 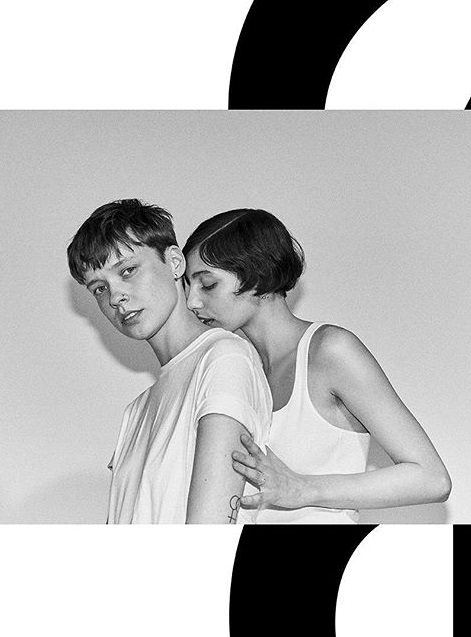 This promotional image from the line seems to capture some of founder Serena Rees' goals about cultivating a relaxed attitude toward gender and sexuality.

Serena Rees, the co-founder of Agent Provocateur, who has been absent from the lingerie world since the sale of the brand in 2007, has been making the news lately with the launch of her new sportswear-inspired lingerie brand, Les Girls Les Boys.

Rees has always held real estate in my imagination due to the incredibly popularity of Agent Provocateur. I remember hearing about the brand for the first time in a romance novel, and becoming baffled and intrigued by what “crotchless panties” could possibly be. Years later, I’ve solved that mystery only to have Serena Rees open up a new one: what does it mean when the press describes Rees’ newest lingerie venture as “gender-fluid”?

For some context, I’m not unfamiliar with the term so much how it’s being used here. I’m a genderqueer person who dresses in a way you might describe as “gender-fluid.” For me, that means my lingerie drawer is a jumble of different styles ranging from mesh bras and lace panties (and a cherished Agent Provocateur waspie) to men’s boxer briefs and chest binders. These things are not all available from the same retailers by any stretch of the imagination.

So when I heard “gender-fluid lingerie”, my first thought was an almost-impossible one: wait, is a mainstream lingerie designer launching a brand that accommodates genderfluid people’s needs?

And then I thought: what would that even look like? 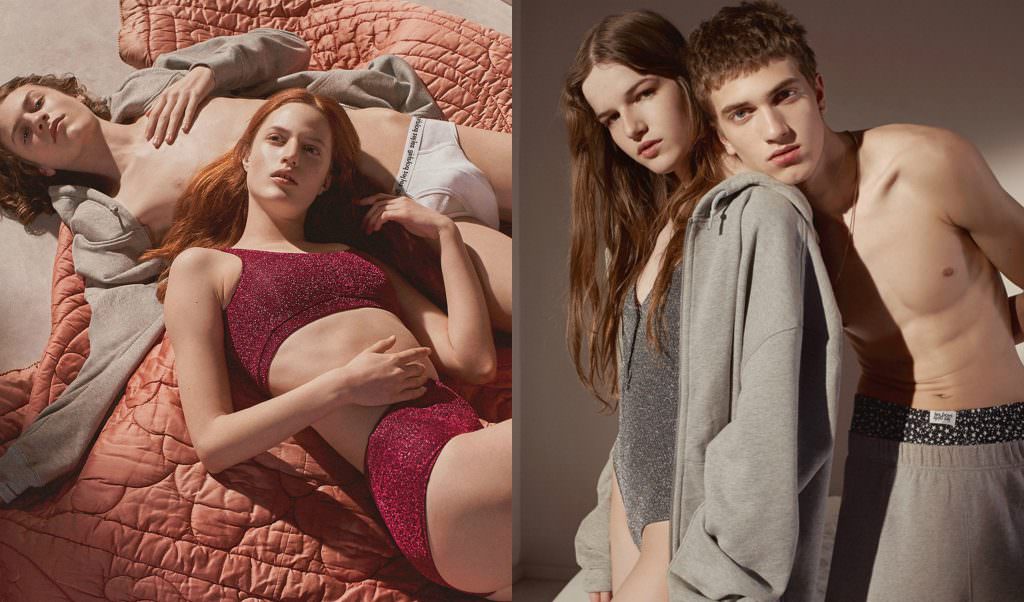 In fairness, it’s not clear if the specific label of “gender-fluid” comes from Rees herself. She’s said some exciting things in her interviews, though. She talks with wistful delight and affection about her kids and stepkids’ “blurred” lives, which she seems to view as a tumble of sexuality, identity, and beautifully rumpled clothes.

She’s also expressed some regret about her own involvement in promoting an unachieveable beauty standard through Agent Provocateur, saying “It is wrong and it is worrying because it makes people so unhappy and insecure.” She sounds genuinely excited about the idea that kids these days seem to be liberated from those standards, and adds, “I really wanted to be a part of it.” And her website features a list of values that sound like they’re hinting at gender identity.

I’ll be honest: reading her quotes over the last few weeks, I’d gotten excited. Agent Provocateur’s former designer, returning to lingerie after ten years, with the explicit goal of creating a line that gets away from rigid standards of beauty? And publications from the New York Times to The Daily Mail describing the collection as gender-fluid? To quote Rees, I really wanted to be a part of it! 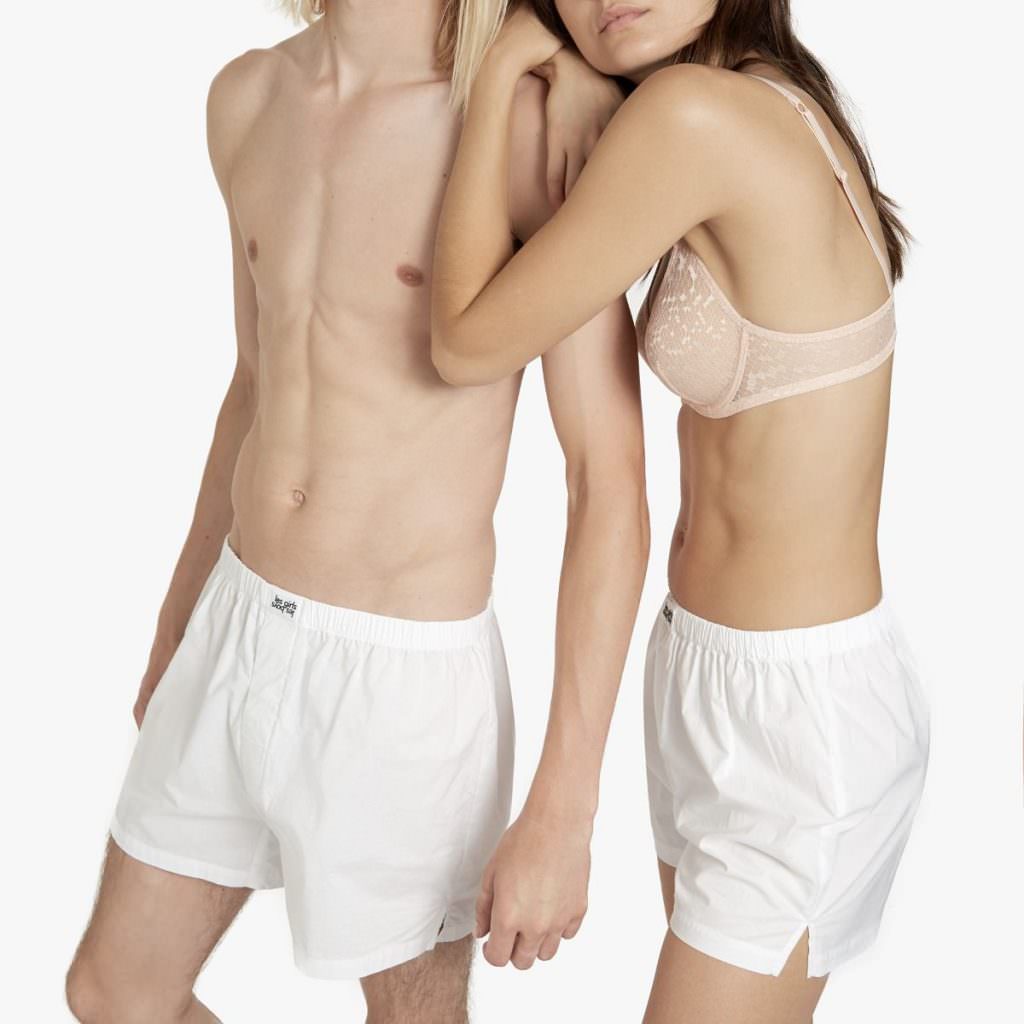 These white boxers are one of a handful of items modeled on both men and women.

But then I saw the current collection and the website on which it’s housed. It’s not so much that I’m disappointed as that I’ve returned to my usual level of -appointment over the state of lingerie made for trans or nonbinary or genderfluid folks. The lingerie that is actually made with our needs and desires in mind tends to be made by us. And this isn’t it.

The tumbled letters of "les girls les boys" that serve as a loading image suggest a more casual approach to gender than is promoted in the rest of the site.

However, I noticed pretty quickly that all the “fluidity” in the store flows in one direction: masculine and masculine-inspired pieces crop up in “Les Girls,” but there isn’t a similar smattering of more feminine pieces in “Les Boys.” For example, the girls’ side features masculine-styled sweatpants, but there is no accompanying lace bodysuit, or even any lace detailing, on the Les Boys side. 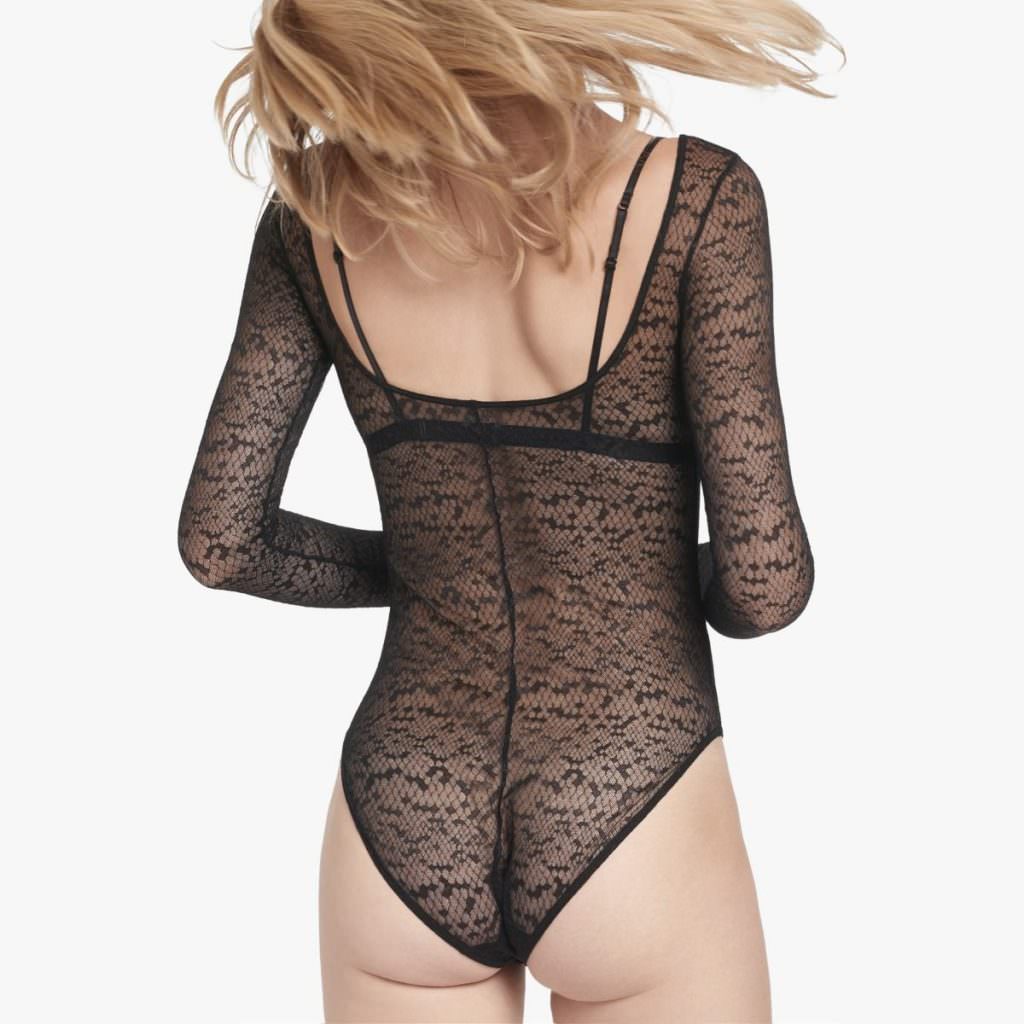 Pieces like this lace bodysuit appear only on the "les girls" side of the website, and are not mirrored with looks on the "les boys" side.

In case you think I’m making something out of nothing, I counted the term gender-fluid in no less than three publications. Rees herself is quoted in W Magazine saying, “The younger generation really doesn’t care about what is traditionally meant for men and what is traditionally meant for women...they all share clothes, no one cares about traditional gender marketing, it’s about diversity and it’s important that fashion reflects that.”

And yet the fashion of Les Girls Les Boys reflects a strong gendered split. So does the website. It’s chockablock with gendered marketing strategies, from the dividing line down the middle to this mailing list popup I captured, which asks me to give not just my e-mail address but my specific preference of targeted advertising: les girls or les boys? 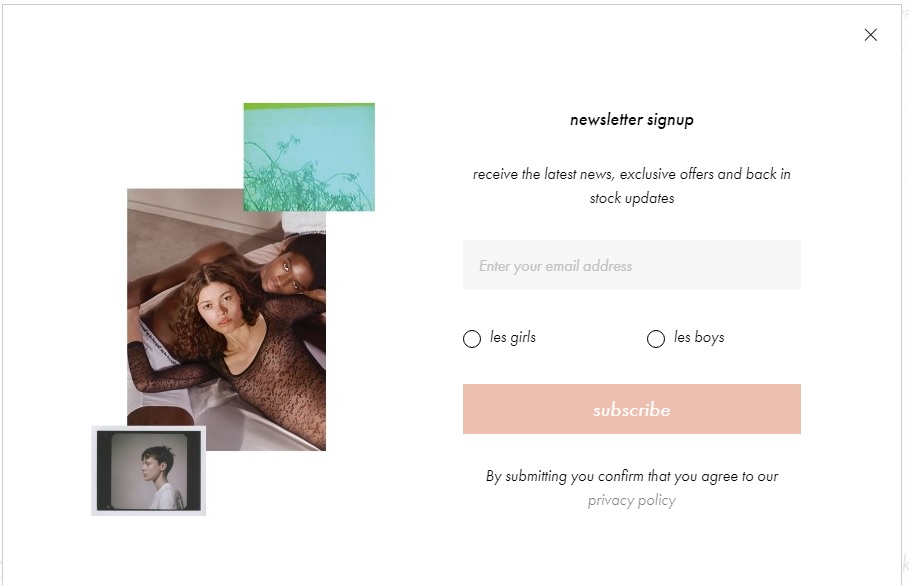 The signup form for e-mails specifically requests that you select "girls" or "boys" to receive targeted advertising and sale notifications.

I can only speculate about the reasoning behind this level of gendered marketing in both the apparel and the site design. It could be a disconnect between Rees and her team, especially in the way the website is laid out. More cynically, it’s possible that Rees herself knows that while people like androgyny as a style, in general the discomfort of not knowing what gender an article of clothing belongs to could potentially hinder sales. Therefore, it’s important to make sure "les girls" and "les boys" feel secure in les gender identities.

If you take the second read, even the name begins to sound less fluid, since it really only acknowledges two possibilities. Regardless, Les Girls Les Boys has ended up selling the safest kind of play with gender fluidity, rather than taking a bold leap into it.

I’m not sure any of this is Rees’ fault, exactly. You launch a new brand and you’re bound to experience some disconnect between your ideal vision and the final product. And Rees has created a cute, cheeky line that lines up with the “androgynous” trend in fashion right now (a trend, I might add, that grew out of queer youth street style). 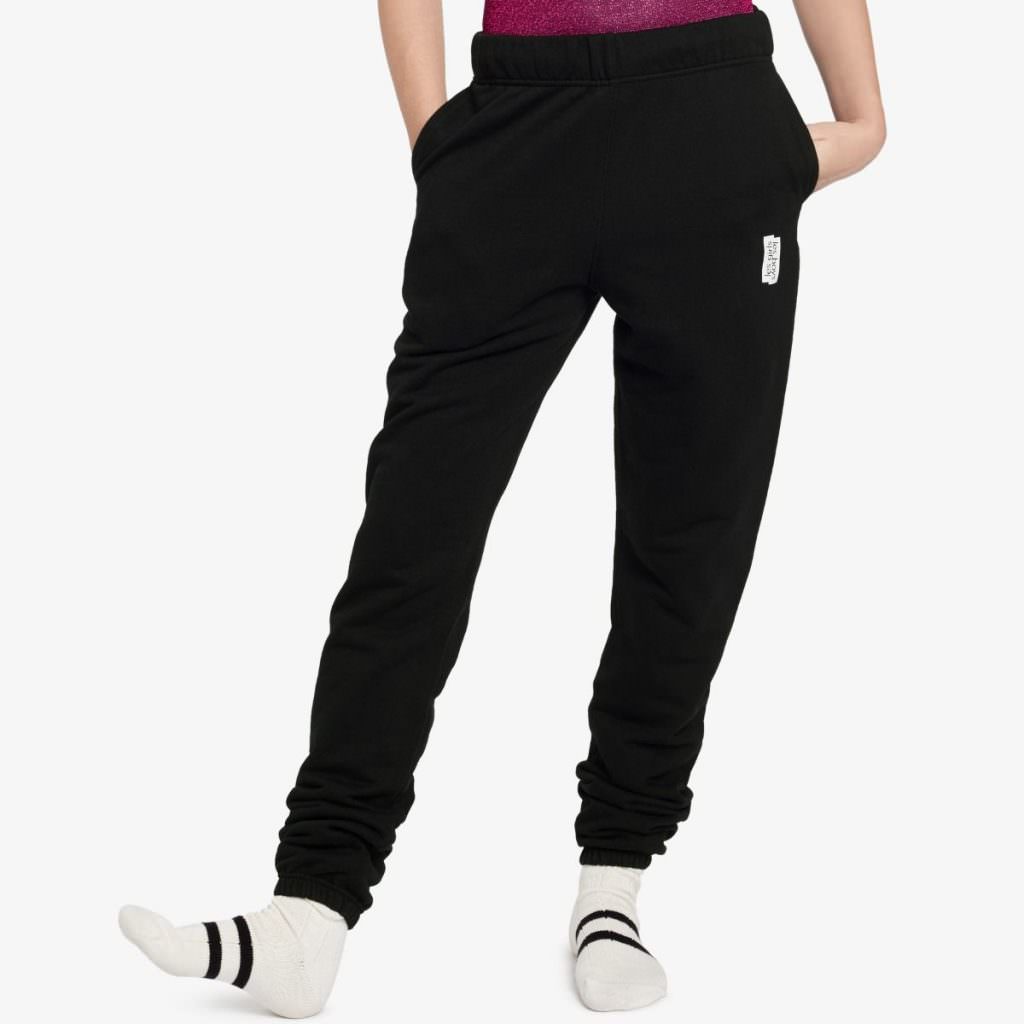 More masculine pieces are shown mixed into the "les girls" side of the website.

However, this collection is not the prize I thought it might be, and it’s left me with lingering questions about what it means to be marketed to. There’s enough in this collection that I like that it’s almost like seeing myself in a funhouse mirror (i.e. so this is what someone far removed thinks someone like me looks like). Which, of course, happens all the time to marginalized folks. Mainstream fashion sees something they like, and they manufacture it and sell it to a mass market. The process of making it appealing to the masses changes it.

It’s easy to take the things that one likes the most from a particular culture - for example, the beauty of queer and trans youth who seem to carelessly throw on whatever clothes they find lying around after an afternoon of sensual lounging - while simultaneously ignoring the real needs, desires, and fears of those people. Queer and trans youth created the looks that have been reduced to “girls in baggy sweatpants” through the eyes of Les Girls Les Boys. At the same time, Les Girls Les Boys has made it easy to ignore the possibility that those youths might not be girls or boys or anything else you can easily identify with.