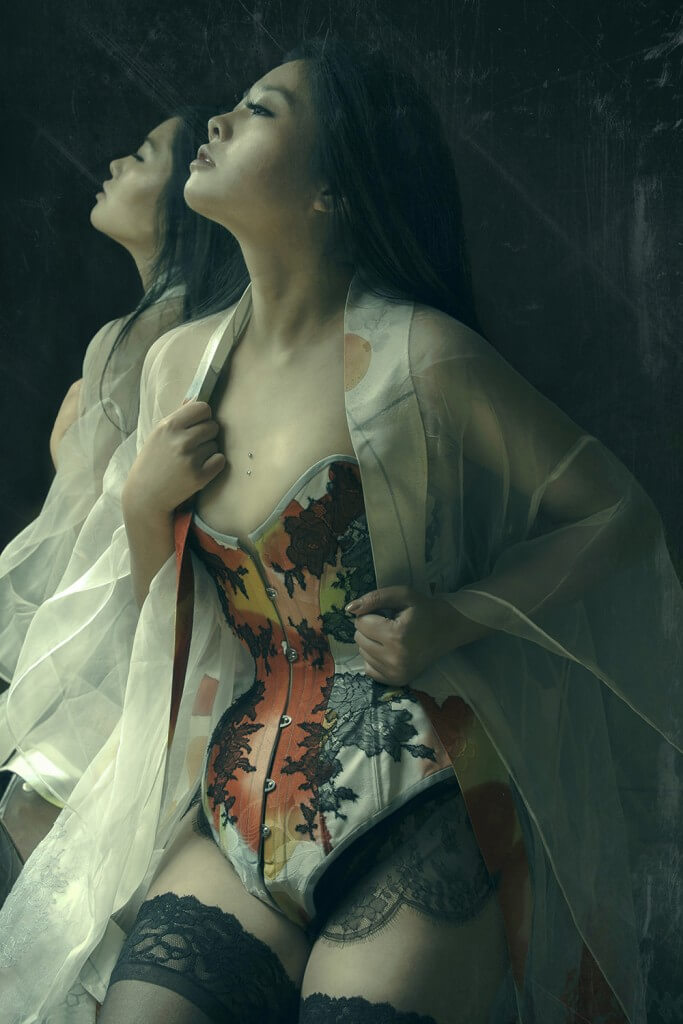 Corset and lingerie by Karolina Laskowska. Modelled by Twig, photography by Jenni Hampshire.

I was at the Oxford Conference of Corsetry just over a week ago, and in its run-up I spent most of my time getting pretty obsessive about corsets.

I’ve been neglecting other areas of lingerie to dedicate my time to crafting these exquisite, waist-altering garments. Consequently, I’ve spent a lot of time thinking about the significance of the corset.

A (Very) Brief History of Corsets

For the majority of their history, corsets have been almost exclusively an undergarment. It was during their heyday in the Victorian and Edwardian eras that they made the transformation from a purely functional pieces of clothing to a beautiful pieces of lingerie.

The introduction of luxurious silk fabrics and dainty lace trims meant many corsets became elegant components of trousseaus or decadent boudoir accompaniments, a new incarnation for these previously staid garments. Yet in the latter half of the 20th century, heavy foundation wear fell almost entirely out of favour.

It wasn’t until around the 1980s that corsets saw a major resurgence (one that we can largely attribute to Jean Paul Gaultier’s corseted costumes for Madonna). Corsets stopped being solely hidden under clothing. 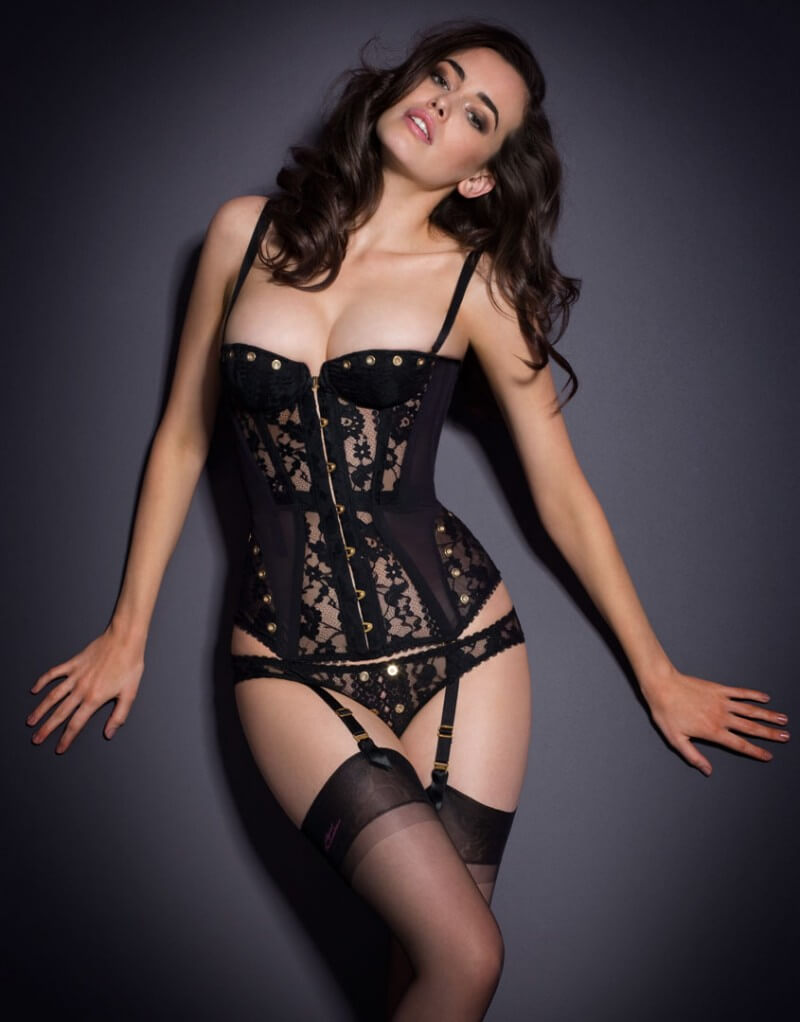 There’s no doubt that corsets have become somewhat of a staple for many modern lingerie brands. However, for many of these labels, it can be debated as to whether or not these garments actually count as ‘proper’ corsets.

Many of these pieces are lightly boned with plastic and without much curve cut into the patterns. That means they will not offer any real form or shaping and cannot be called foundation wear. In these instances, the difference between corsets and basques and bustiers has become somewhat blurred. 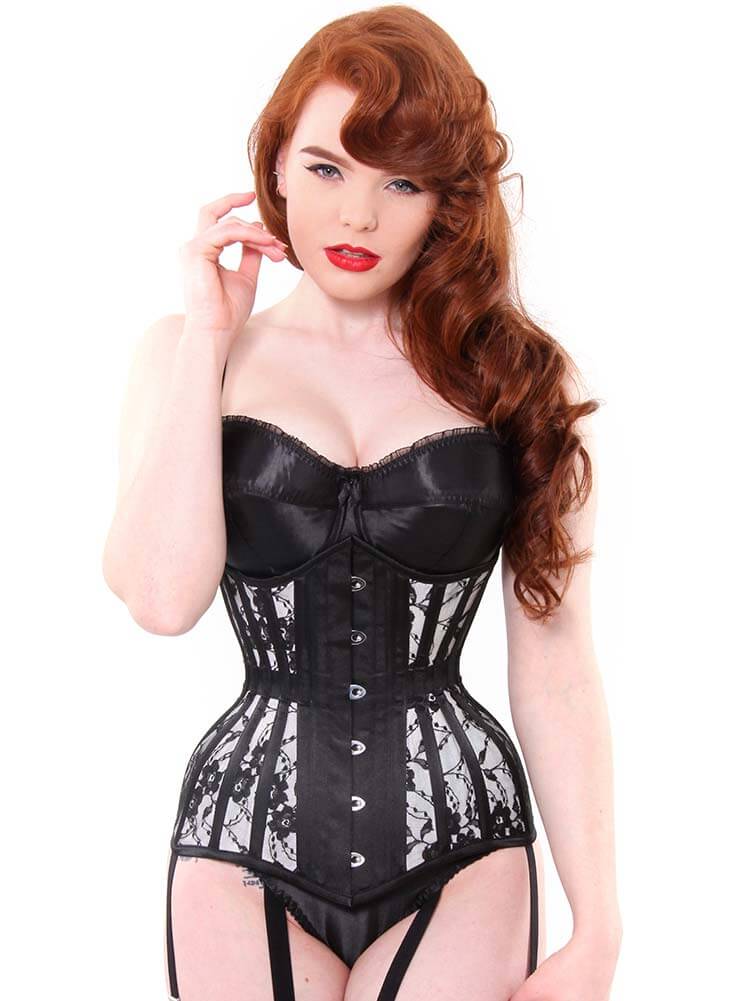 What Katie Did 'Elsa' Corset

It’s very rare to see actual shapely corsets being sold alongside lingerie (with the exception of certain vintage-inspired brands such as What Katie Did and Kiss Me Deadly).

Curvy corsets and waist-training have certainly seen a resurgence in recent years, and there’s certainly been a shift in the number of retailers that market these corsets as pieces of underwear. 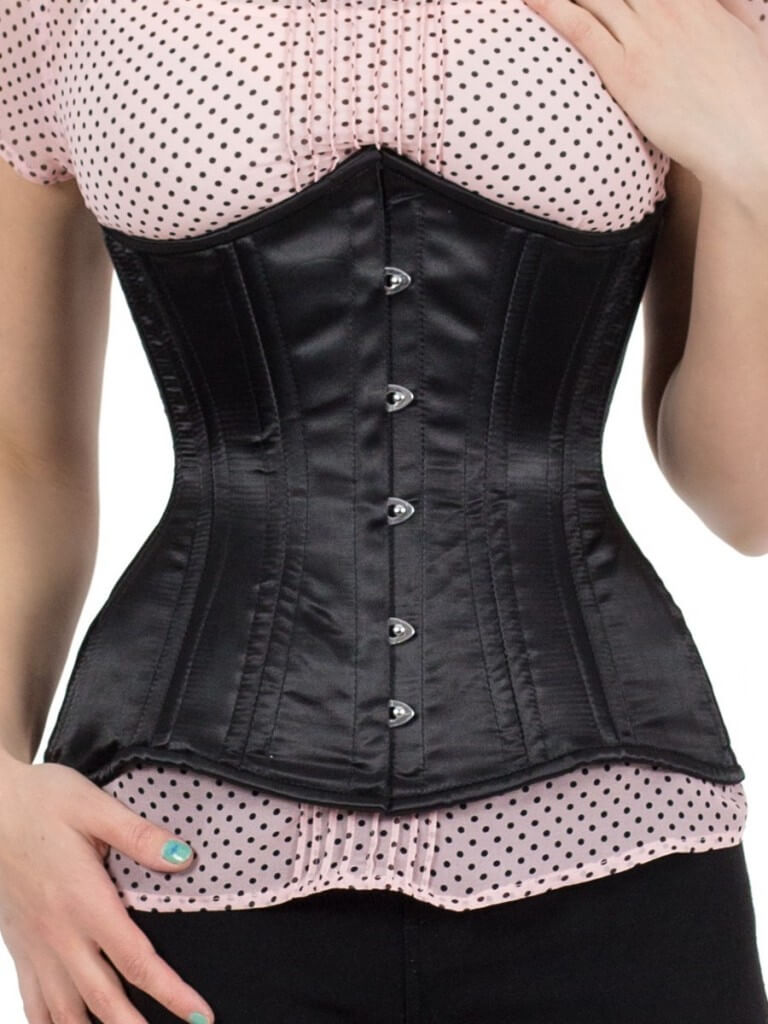 Many corsets are now being designed exclusively as outerwear pieces, whether these be as casual wear, eveningwear, or bridal wear.

These pieces still often give a nod to lingerie though. For example, many OTR styles include loops for suspender attachments. In addition to this, it must be noted that the boundaries between lingerie and outerwear are becoming more blurred. Corsets notwithstanding, consider the number of lingerie brands that create bras with extravagant necklines and harness attachments. 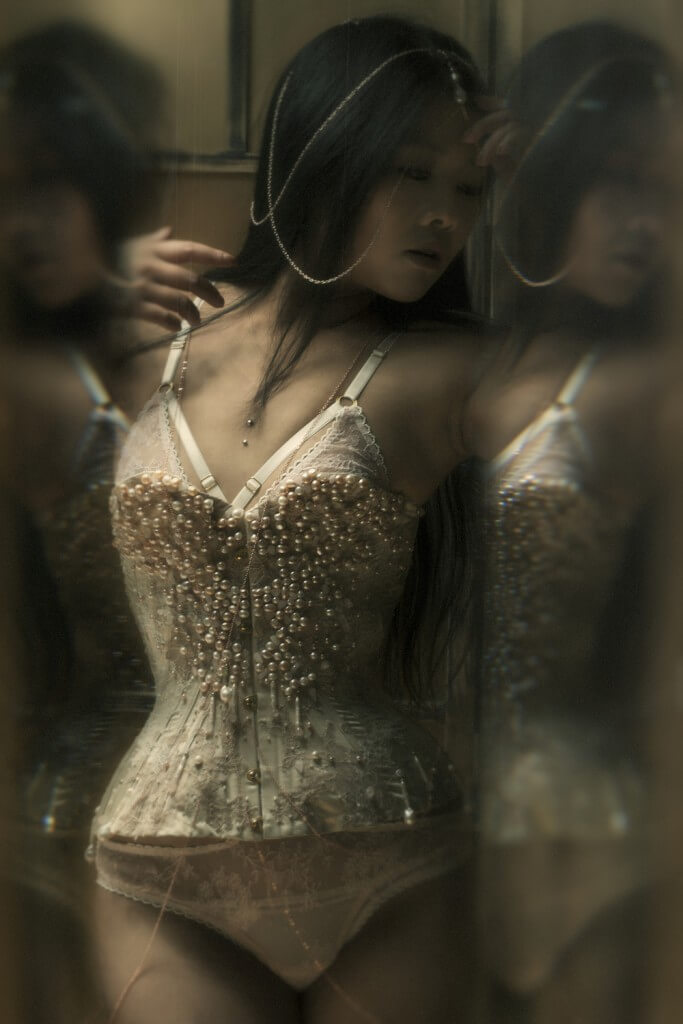 Corset and photography by Jenni Hampshire/Sparklewren, modelled by Twig.

Of course there will always be corsets that are created specifically as lingerie, whether that be historical reproductions or modern interpretations of girdles.

Nevertheless, the area of corsetry that most interests me most (and that I aspire to as a designer) is couture. Whether it be Mr Pearl’s impeccable creations or Sparklewren’s lace and Swarovski encrusted delights, these are pieces it would be criminal to cover up with clothing. It’s the uncommercial side of the industry that interests me most. This where creativity can take wing. Costing and mass production aren’t considerations for pieces like these. I suspect this is where my personal disconnect between corsets and lingerie originates.

There’s no ‘correct’ answer for corsetry’s position in the lingerie world. I asked a number of prominent figures in the corsetry community for their thoughts on the matter. The variety of opinion certainly offers some food for thought!

Corsets are objects in their own right, whether lingerie or showpiece. They're connected to shoes, hat and gloves. They exist in their own world. They are not fashion; they are beyond fashion. They can be in or out of fashion. Once they were required but that time will never return. But imagine the waists you'd see! Lingerie is something very private, to be shared in private. Corsetry should be shared wherever possible. ~ Mr. Pearl 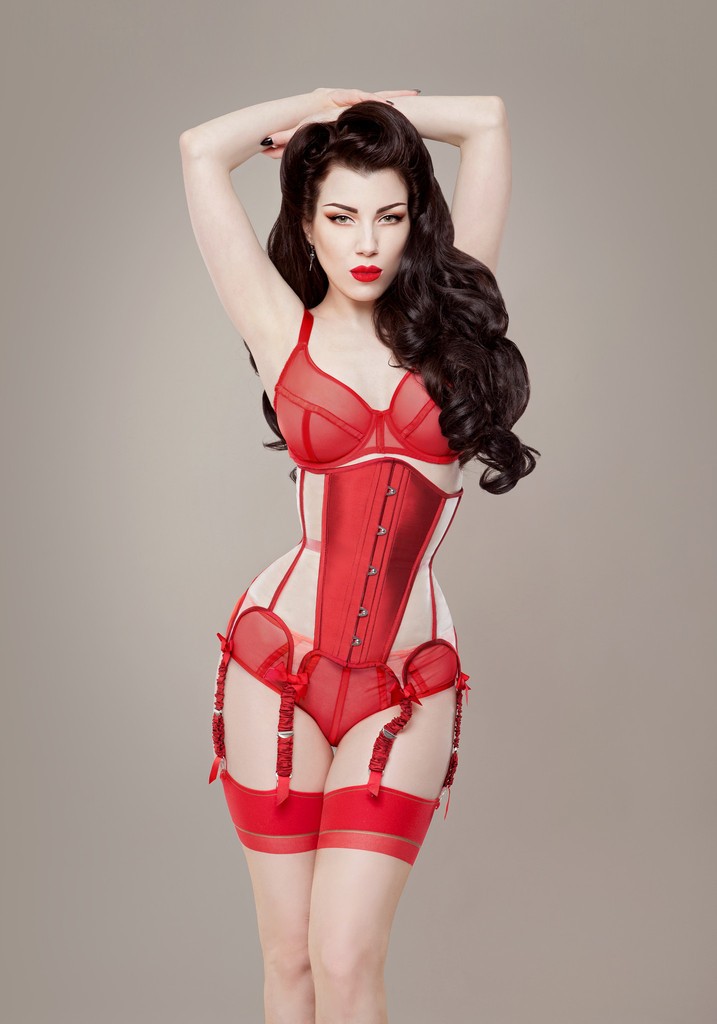 Corsets throughout history - and even in the present day - shape the body and alter the silhouette beneath outer clothing. Undoubtedly, in their true form, corsets are the pinnacle of lingerie elegance, engineering, and sophistication. ~ Danielle MacDonald, Ava Corsetry 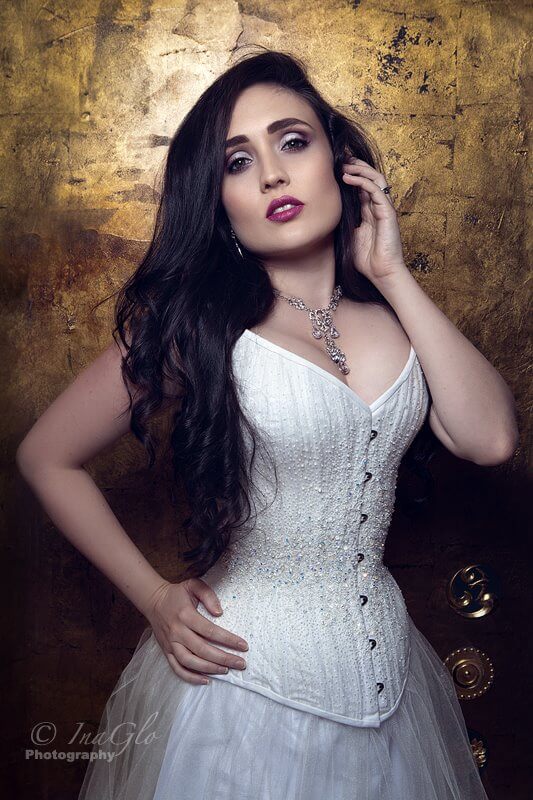 As a general rule I don’t think of corsets as lingerie, though I do think that it’s possible for corsets to be underwear. When someone says ‘corset’ my first thought is usually of outerwear. They’re more of a special garment. The corsets that I make tend to be special event or evening wear rather than foundations. They’re designed to be seen. I think that ultimately whether corsets are outer or underwear is up to the wearer. ~ Lowana O'Shea, Vanyanis 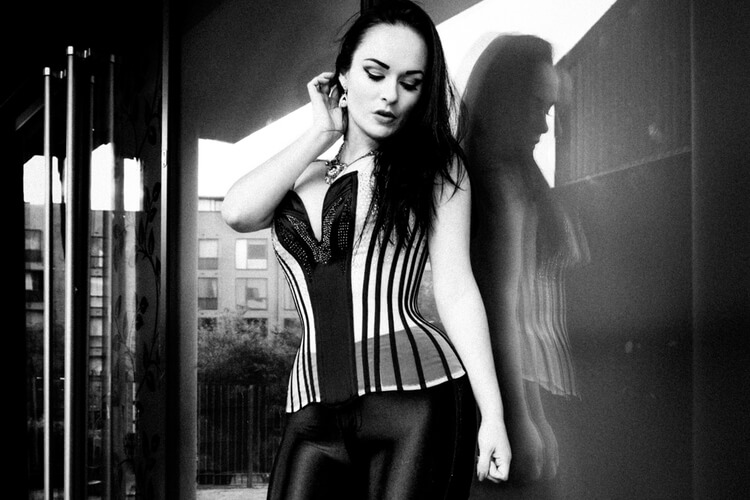 Some corsets are lingerie - obviously. But when a corset is made for the purpose of being worn as a fashion item, I find it quite absurd that people still refer to them as 'lingerie' when clearly they are not. Also, there is a mass perception that corsets are 'lingerie' and 'naughty/risque.' My personal aim in life is to change that common misconception. Although there is obviously a place for lingerie within corsetry, this is the 21st century and corsets have been worn as outerwear for quite some time now. Personally, I find it quite insulting when having spent an inordinate amount of time making a corset for outerwear - a wedding gown or such - and people still refer to it as underwear. ~ Julia Bremble, Clessidra Couture 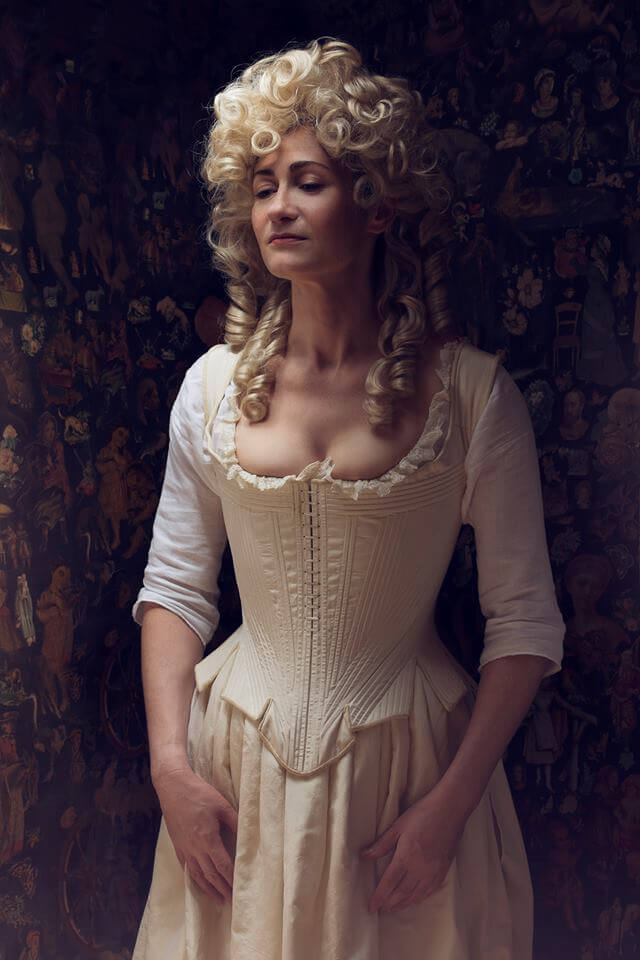 Yes, I do consider corsets to be lingerie, because as someone who sees fashion through the lens of historical fashion - part of a continuum - a corset is an item of foundationwear that has latterly been adopted as outerwear. Part of the initial success of that development was the risqué repurposing of underwear, and part of its appeal now is the ability to take it full circle. The "stealth" corset takes corsetry right back to its roots. In between, the corset is still being used, even as outerwear, to smooth and shape the figure, which is a characteristic of foundationwear, whether or not you wear anything on top of it! ~ Cathy Hay, Foundations Revealed 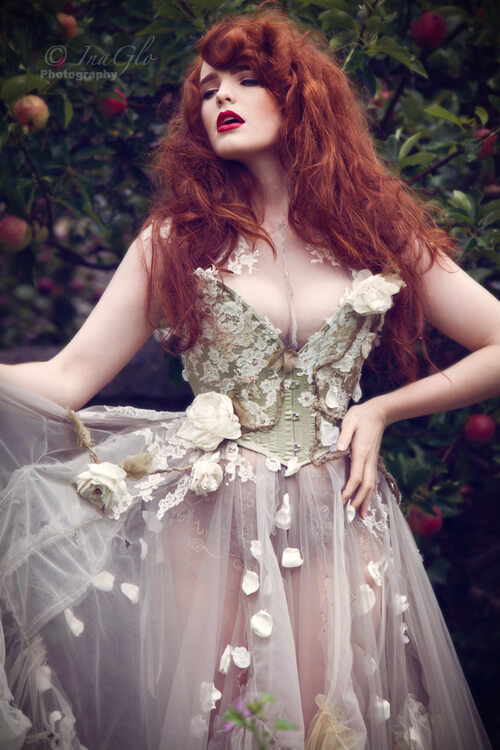 Corsets can be lingerie/underwear or not. In the same way that you can have a hat and put it in all different categories. I might have a swimming hat, a straw hat and a hat for bed. At the end of the day they're all just hats. I don't see the importance of the question. Surely you sell or buy a product and get to do what you wish with it. I predominantly create corsets worn as bodices for brides and events, but in my daily life I often wear a cincher as lingerie. I'm also not one to be told how I should wear a thing. ~ Rosie Dennington, Rosie Red Corsetry & Couture 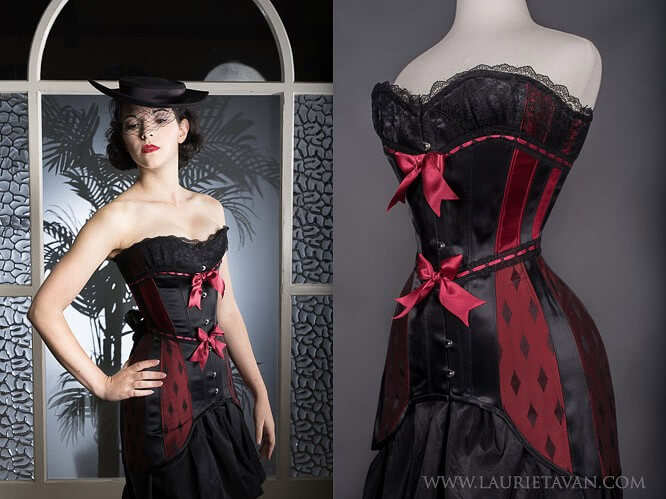 Yes, since corsets began as undergarments you can consider them lingerie. Even lingerie is crossing boundaries into daywear or evening wear and so too has the corset. ~ Laurie Tavan, Daze of Laur/Laurie Tavan 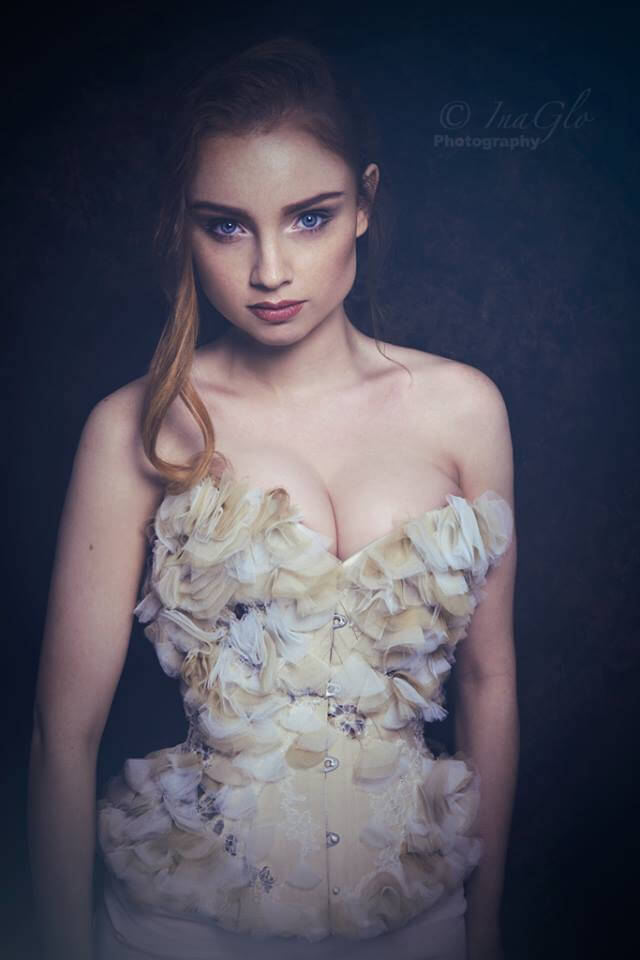 Hmm, are corsets lingerie? Yes, no, can be, don't have to be. How other people like to style and use their corsetry is really up to them. Most of the corsetry we make is obviously intended as fashion wear, but that's just because I find it personally more interesting (there's more scope for textures and embellishments that would be impractical beneath clothing). Ultimately, I really just don't think it matters. People can wear their corsetry however they like. Variety makes life interesting, after all. ~ Jenni Hampshire, Sparklewren 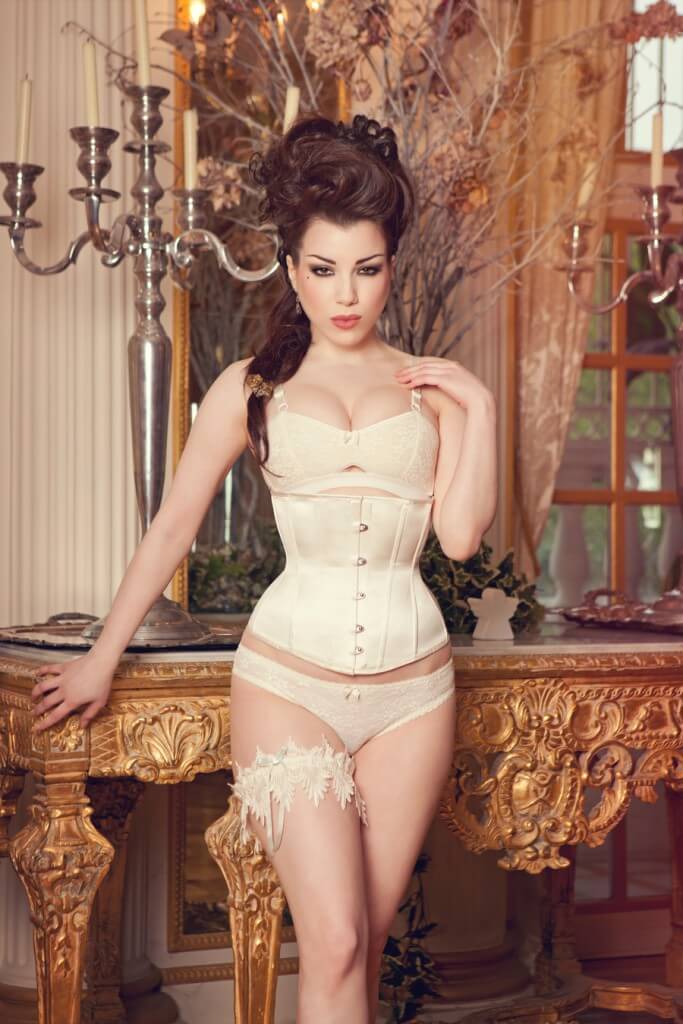 Corset by Kiss Me Deadly, photography by Threnody in Velvet

Historically I recognise that they are lingerie, but the reality for me has been that 90% of the time when I wear them, they're on show. Admittedly that's partly due to a fairly relaxed approach to the line between underwear and outerwear, but it's also to do with loving the fabrics, not really wanting to have them right next to my skin, all sorts of things. I do wear my plain black stretchy day corset as lingerie, under complicated dresses that need it. ~ Catherine Clavering, Kiss Me Deadly

What about you? Do you think corsets are lingerie? And if it applies, how do you wear corsets?