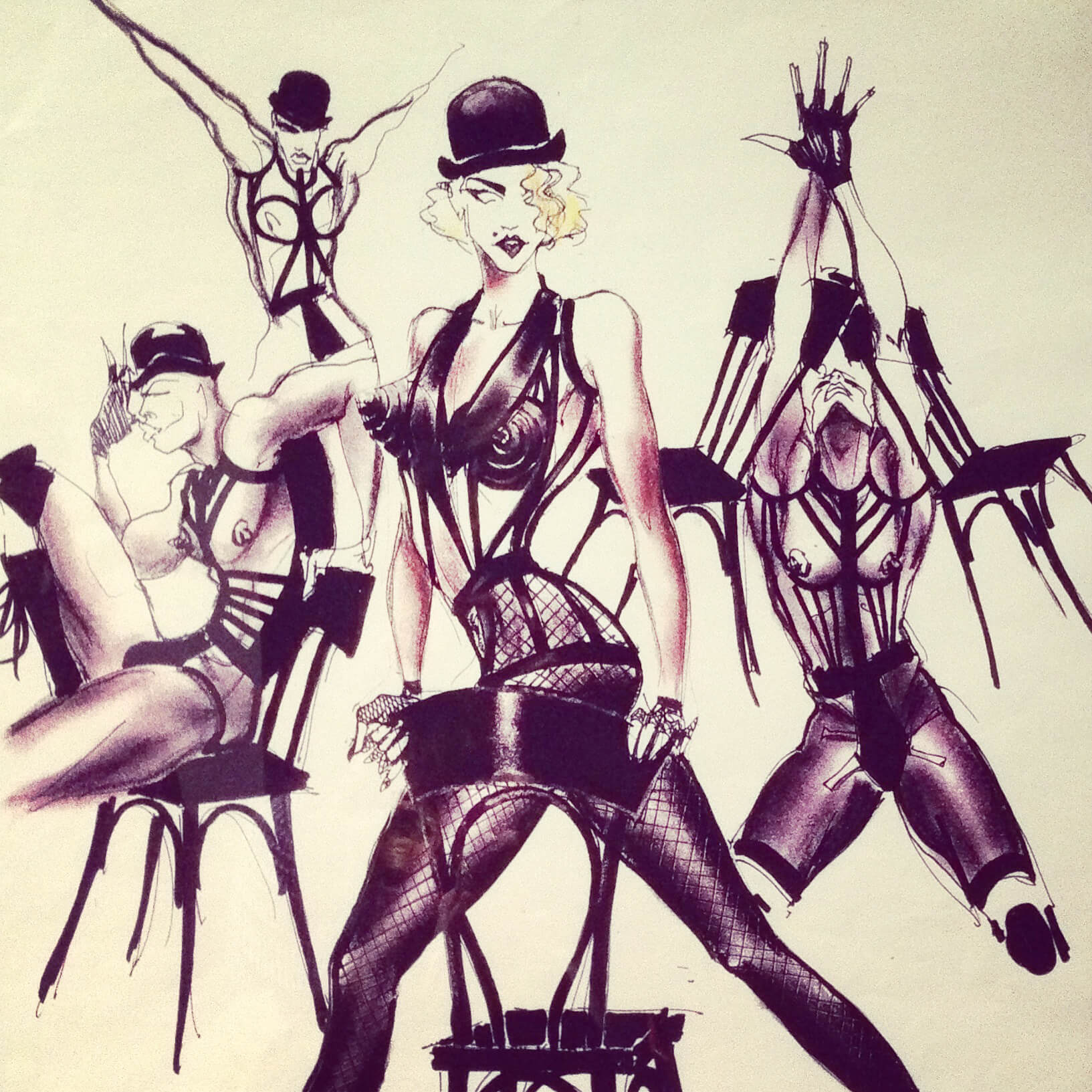 A sketch by Gaultier for Madonna's Blonde Ambition tour

If you’re one of the many fashion-loving New Yorkers on the East Coast right now, then you’ve inevitably heard the buzz surrounding the Jean Paul Gaultier exhibit at the Brooklyn Museum and how it’s been compared to the Alexander McQueen show at the Metropolitan Museum of Art for its innovative and prolific display of avant-garde fashion. Original and a bit shocking, this new exhibition has been hailed as an inspiring inversion of our social and moral codes, encouraging us to challenge gender roles, beauty ideals, and non-conformity in a new light.

As a fashion designer who appreciates the extraordinary, I felt compelled to check out this unconventional display of creativity from the designer who brought us the cone bra and man-skirts. So last Sunday afternoon I decided to take a field trip out to Manhattan’s sister borough. However, it wasn’t until I began to peruse the first of seven rooms within the exhibit that I began to realize how much Gaultier has not only contributed to the fashion world, but to the lingerie world as well. Row upon row of intricately crafted corsets held my attention. Mannequin after eerily life-like mannequin in hand-stitched bustiers made me marvel in delight like a kid in a lingerie candy store. It took all my self-control to refrain from handling each piece and trying them on right there in the exhibition hall! 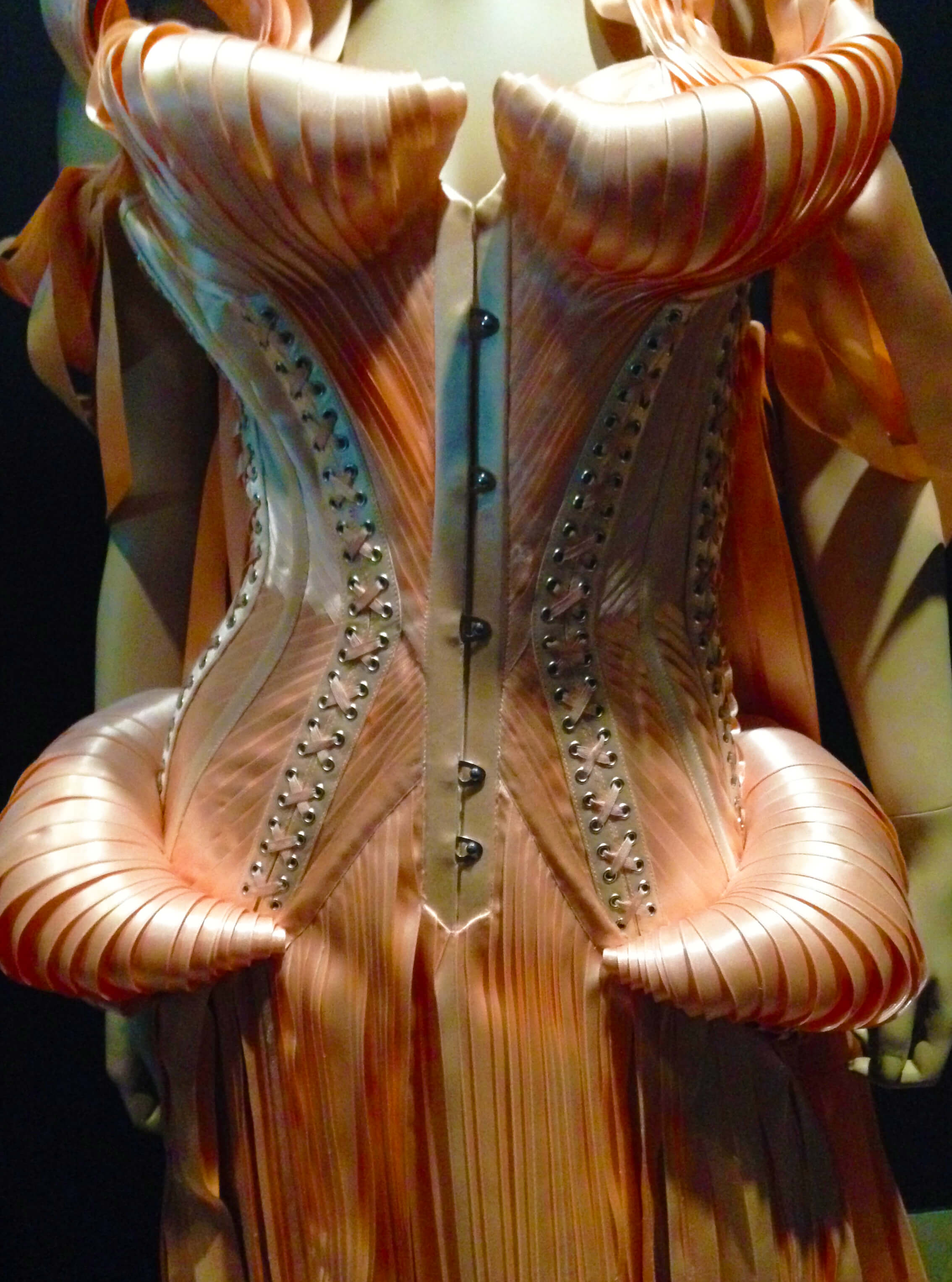 Here is a little history of Gaultier if you are not familiar with his work: French-born and never formally trained, Gaultier began his career in the 1970s, quickly making a name for himself as the “Enfant Terrible” ("The Terrible Child") of fashion. He did this by utilizing shocking and gender-bending ideas for his collections, while elevating the gritty punk-infused street style to the heights of the catwalk. The man responsible for men in skirts and women in suits titillated us with his portrayal of sexual freedom and irreverence. One of the first openly gay designers, Gaultier helped redefine the definition of female empowerment and shared with us a host of muses who helped to push the envelope of couture fashion even further, including a few of my favorites: Madonna, Karlie Kloss and Beth Ditto.

Gaultier’s obsession with lingerie was evident even as a small child in the Paris suburbs. His parents refused to let him play with dolls, which he longed for, and instead bought him a teddy bear to appease him. This bear, which he named Nana, became the model and backdrop for his first foray into fashion. With the help of his open-minded grandmother, who allowed Gaultier to study the construction of her own bras and undergarments, he began crafting makeshift lingerie for Nana --- including a conical newspaper bra and doily skirt. And I’d be remiss not to mention the application of Nana’s red lipstick – the perfect compliment to her sexy boudoir look. 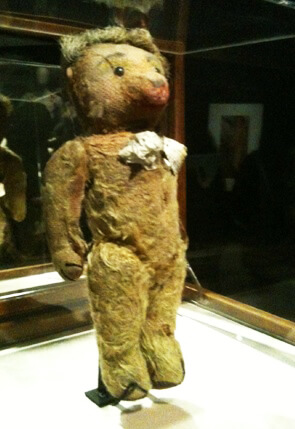 However, it wasn’t until 1990 --- when Madonna collaborated with him for the wardrobe on her Blonde Ambition tour --- that the iconic cone bra was brought into the limelight, much to the shock of the public. Celebrated and criticized, this bra, along with the many corsets, bodysuits, and bustiers worn as outerwear (quite scandalous and profound at the time) pushed the boundaries of fashion, femininity, and masculinity. Since then, many designers have taken a cue from Gaultier and pushed harder on those boundaries, shaking up the catwalks and earning a new generation of fashion followers. 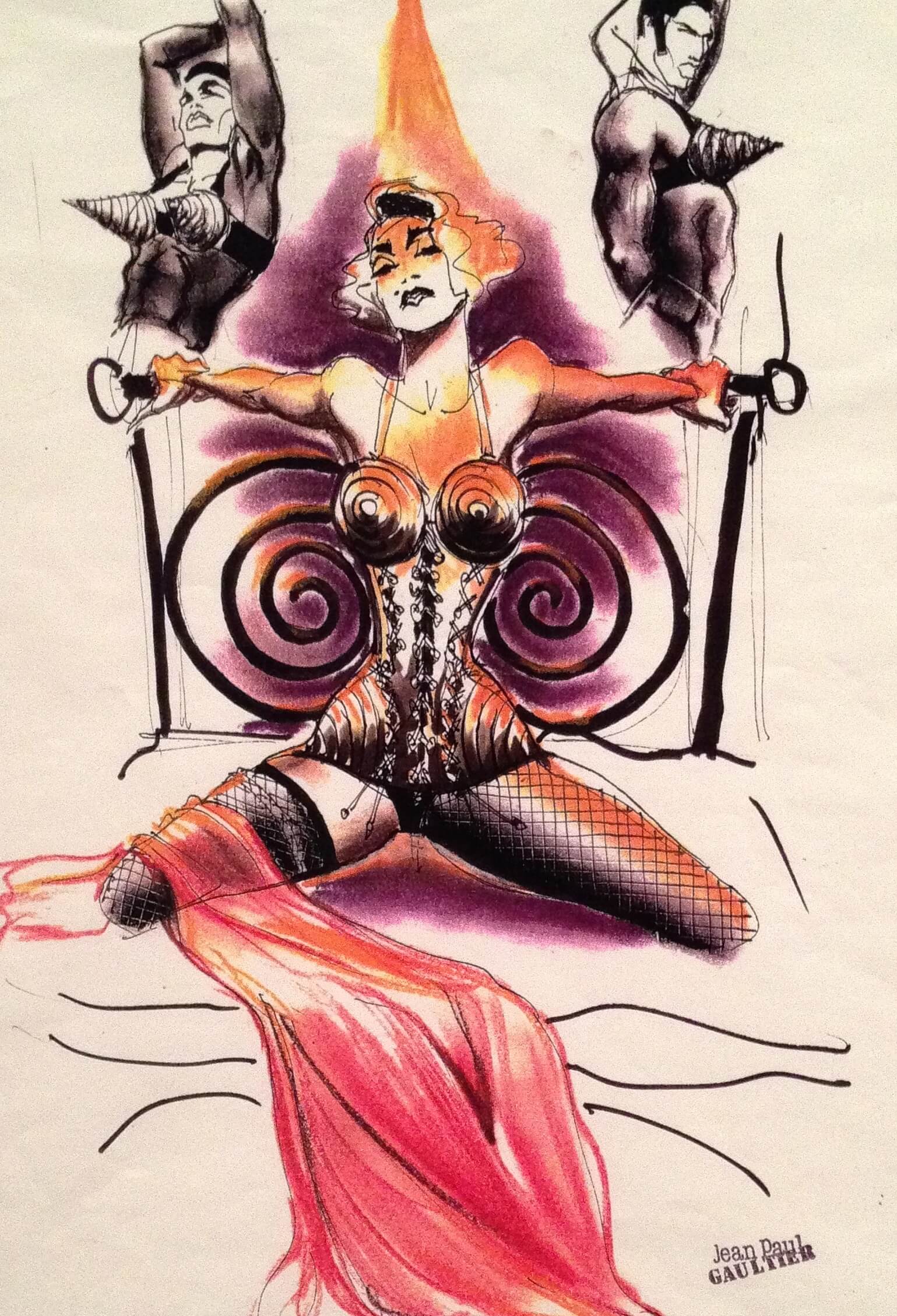 A sketch by Gaultier for Madonna's Blonde Ambition tour

As I walked through the exhibit, a growing number of lingerie brands came to mind as I saw influences reflected in many of Gaultier’s designs and details. The fashion world is cyclical and one great idea tends to spark another as trends ignite, grow, and morph into new and innovative versions of their previous selves. Metal boning, caged bodies, lace-up details, satin quilting, and metal hardware continue to evoke a certain feminine sexual power --- evident today in designs from brands like Agent Provocateur, Chromat, Bordelle, and La Perla. It is possible that many of these brands have taken inspiration from Gaultier himself, intentionally or not. And let’s not forget Gaultier’s most recent ongoing contributions to lingerie --- including his collections for La Perla featuring textured waist cinchers and quilted bras --- or his collection for Wolford hosiery, complete with trompe l’oeil Eiffel tower stockings. And with Gaultier’s own haute couture collections bearing names like “The Virgins,” “Skin Deep,” “The Boudoir,” and “G-Spot,” there is no doubt that Gaultier harbors a deep fascination and understanding of the female body.

If you happen to be in the New York area this month, I suggest you visit “The Fashion World of Jean Paul Gaultier: From the Sidewalk to the Catwalk” before its doors close on February 23rd, after which the exhibit will be moved to the Barbican Center in London beginning in April of this year. In the meantime here are a few more highlights from the show, including some of what I felt were the most thought-provoking, lingerie-inspired pieces that instantly sparked my inspiration for many days to come. 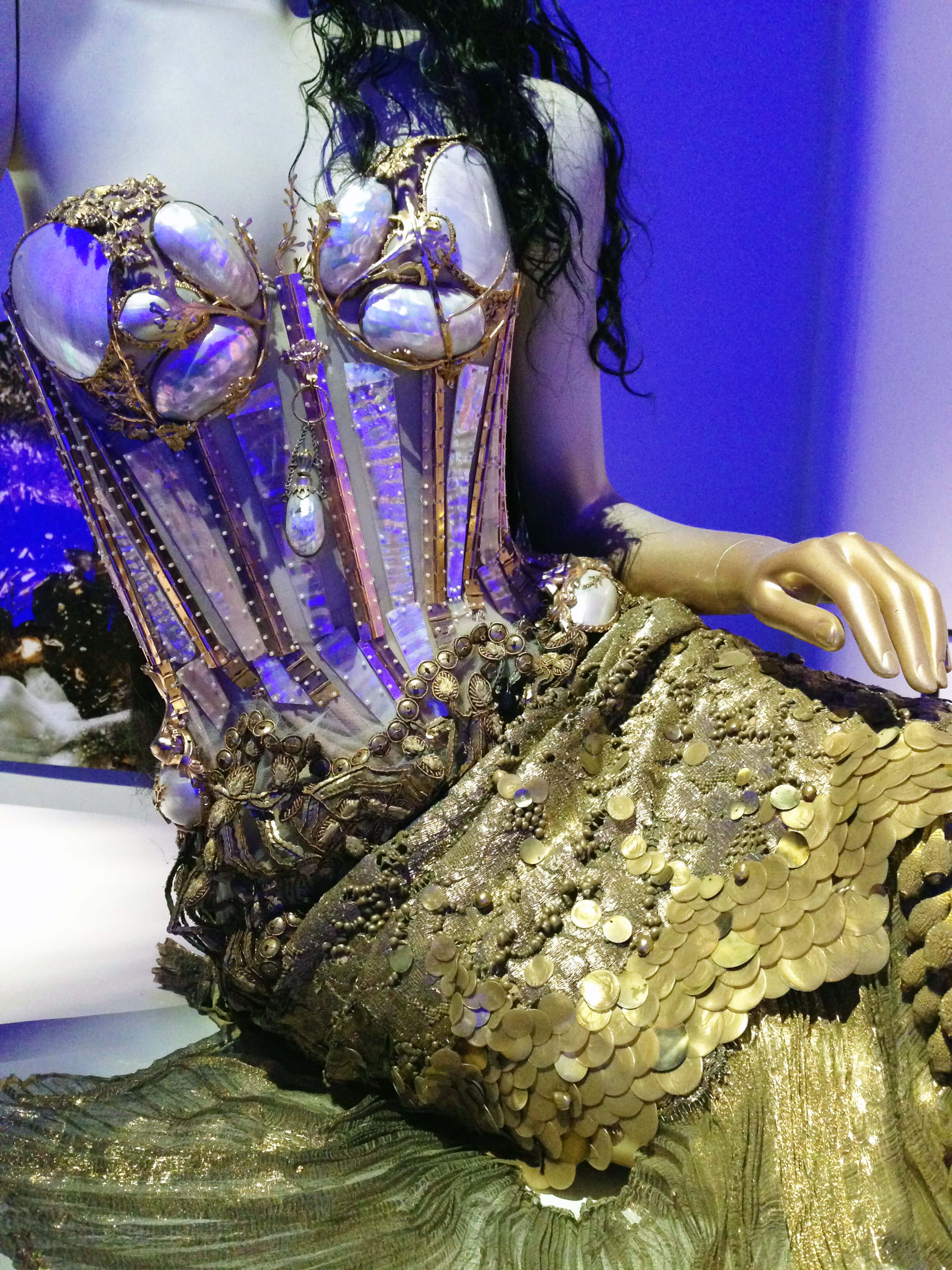 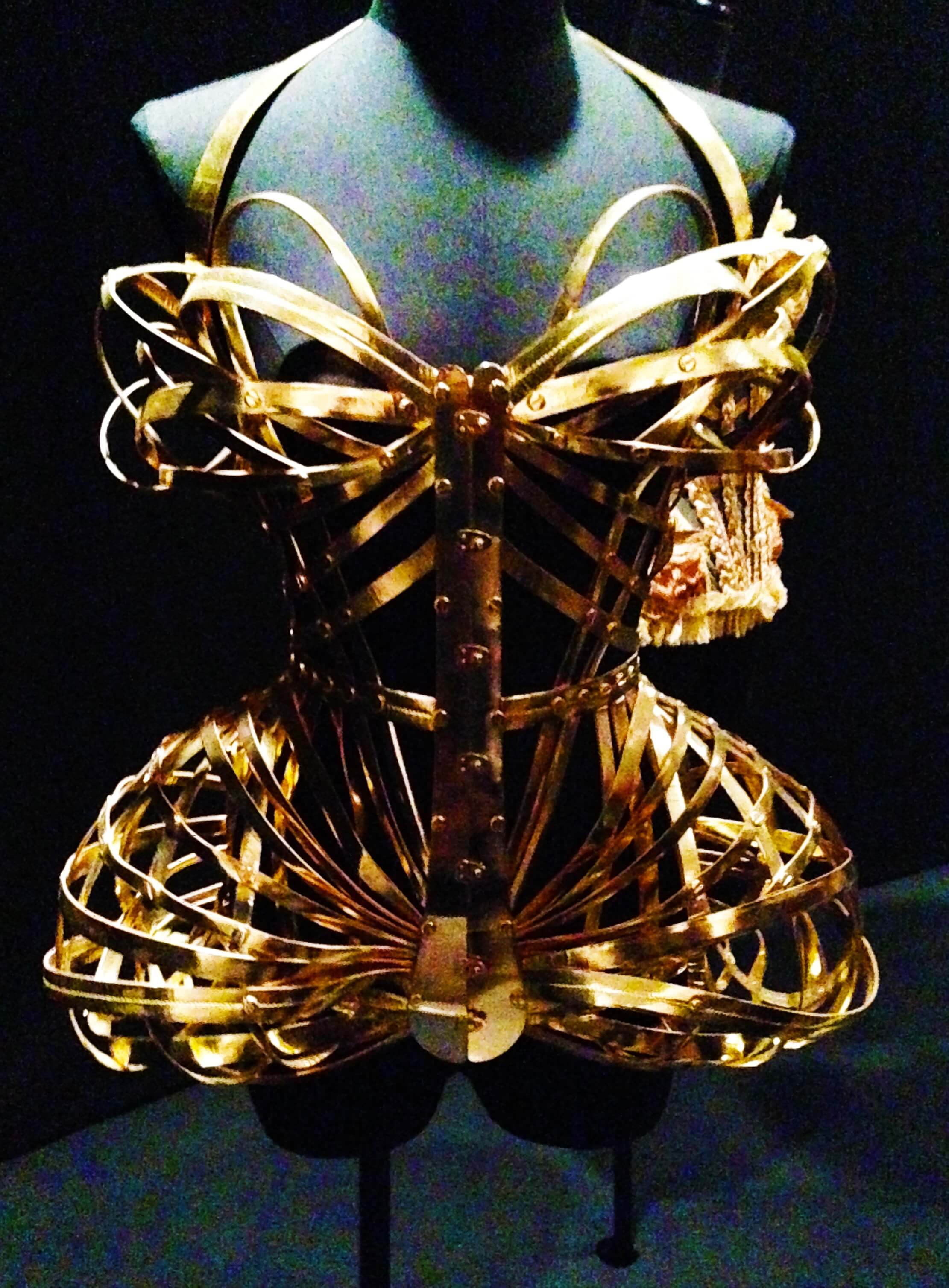 The Devoreuse corset from the Boudoir section 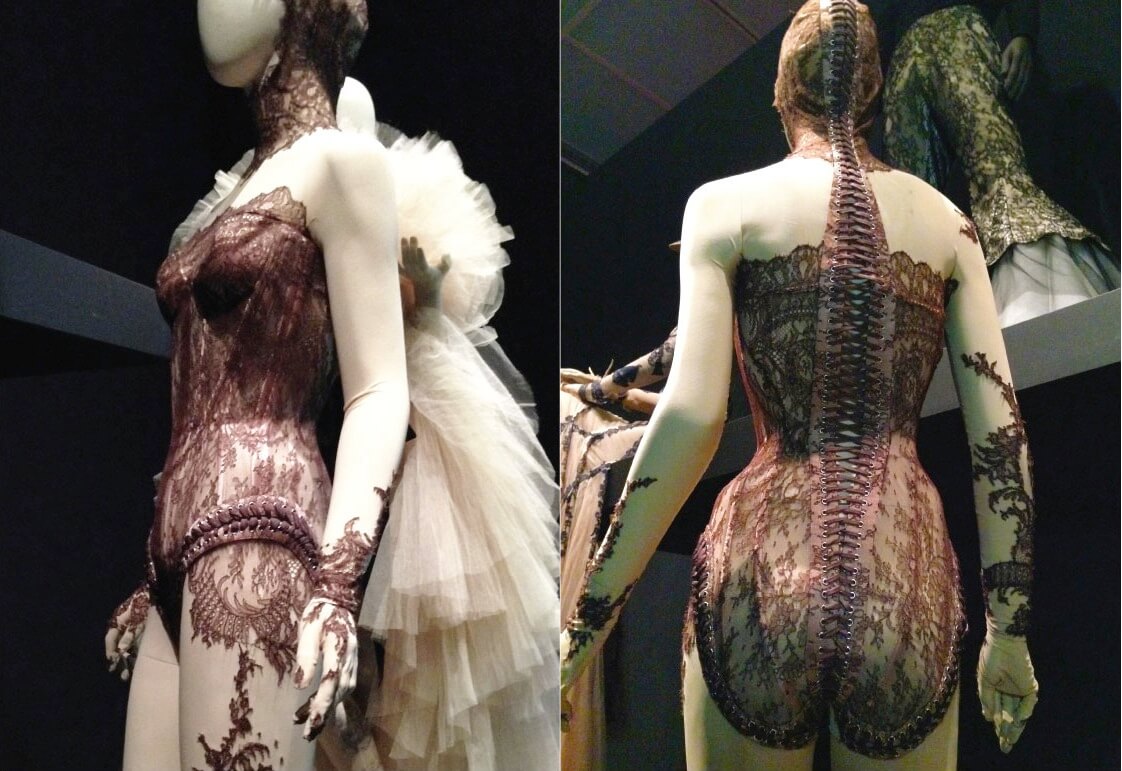 The Lace body-corset from the Skin Deep section 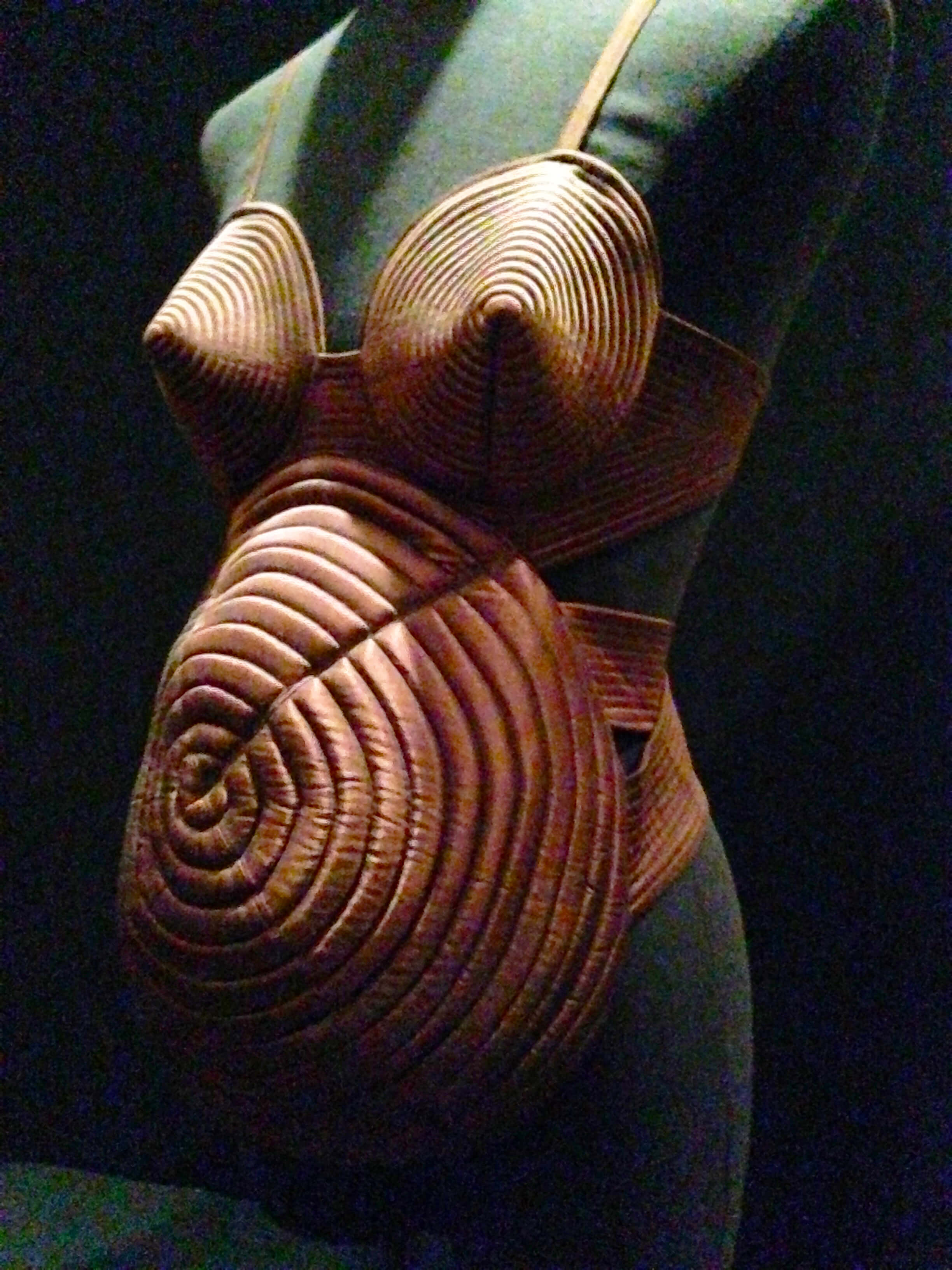 The Baby Bump corset from the Boudoir section 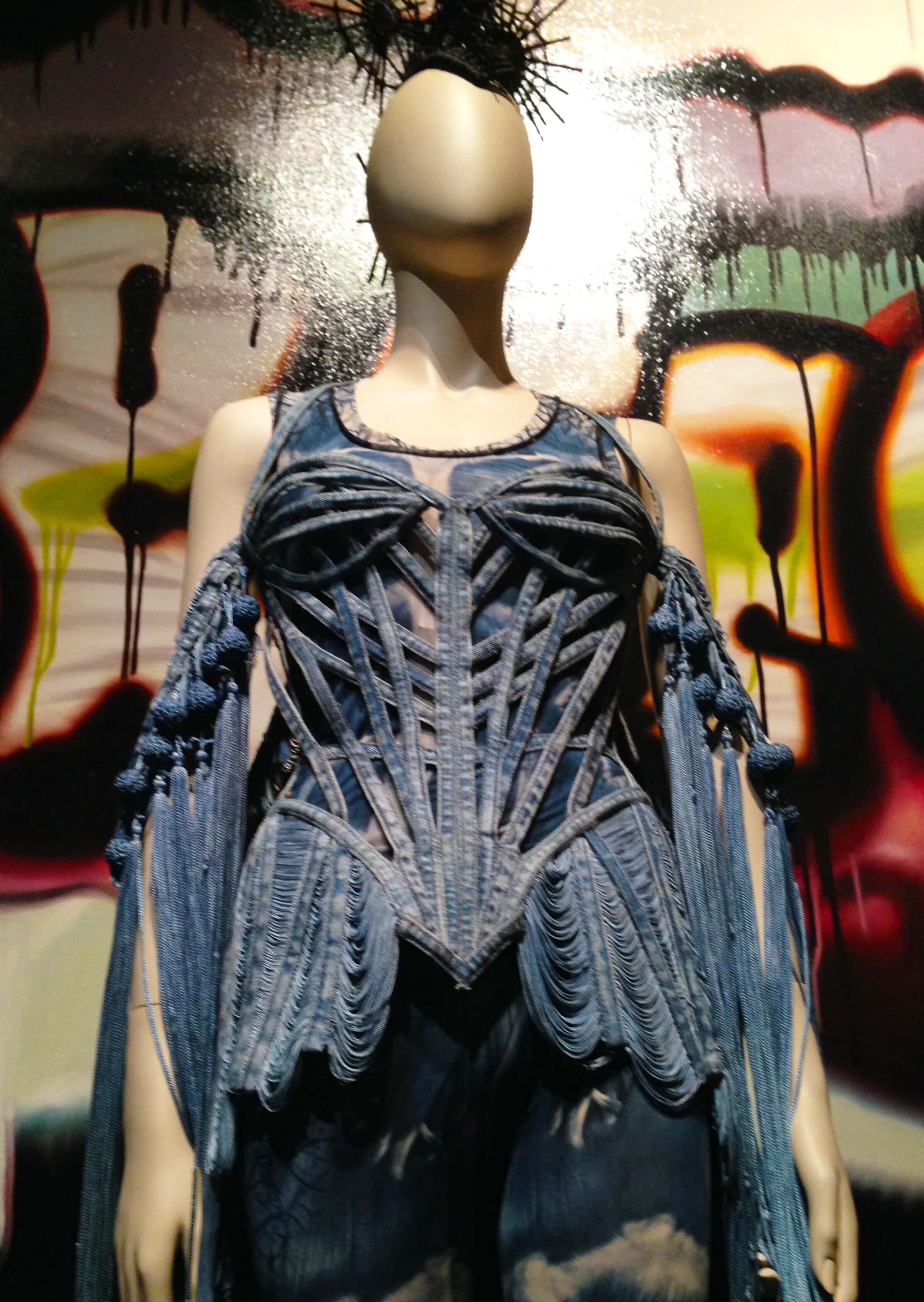 The Denim Look silk corset from the Punk Cancan section 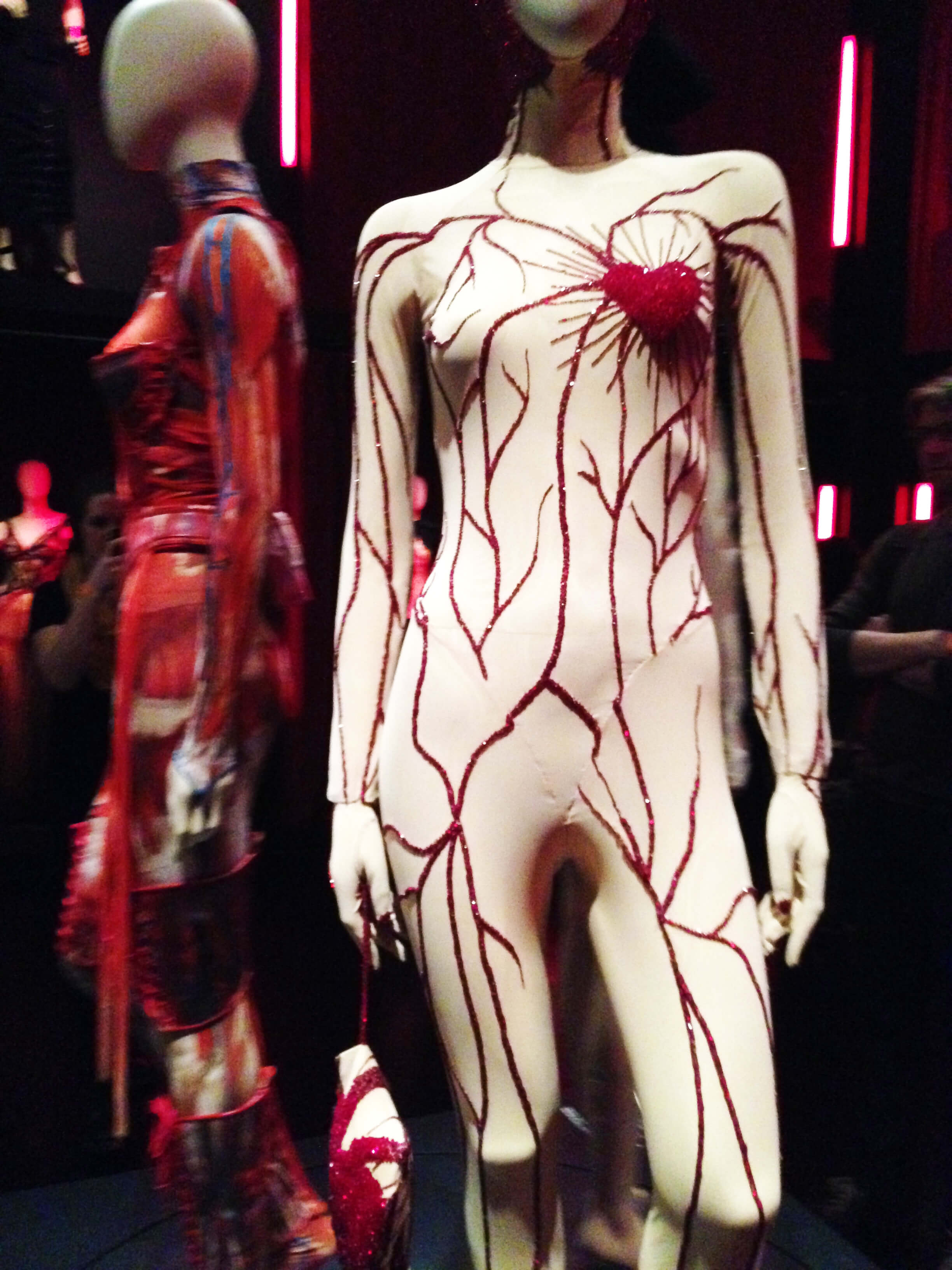 The Heart and Veins bodysuit from the Skin Deep section 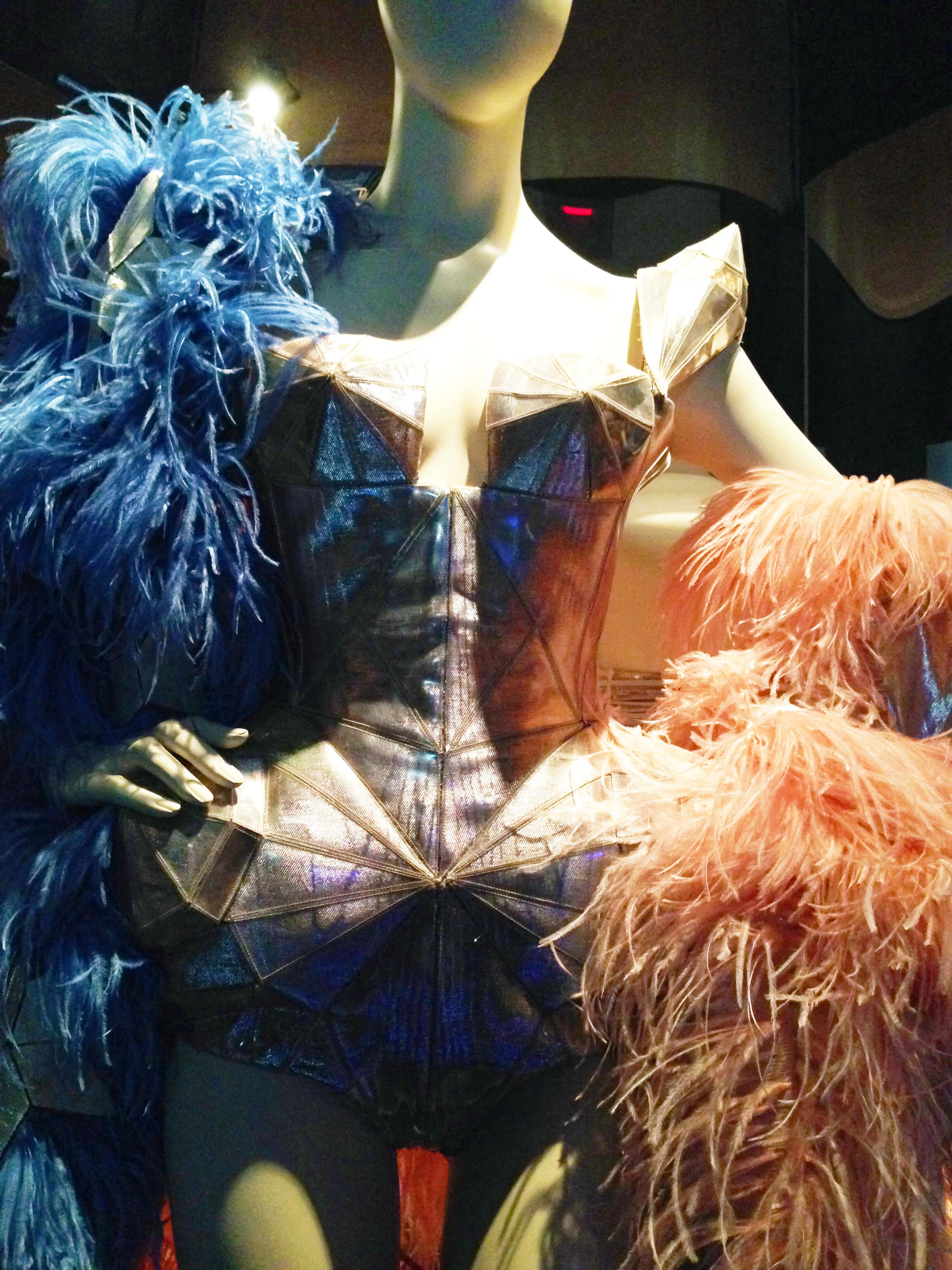 The Barbarella body-corset from the Metropolis section

Have you seen the Gaultier exhibit? In what way do you feel he has contributed to the world of lingerie?