Note: this garment was an editor purchase.

My life as a genderqueer person has been a constant search for garments that are androgynous rather than strictly masculine. I’ve been quoted before on my thoughts about binders: I sometimes want to bind my chest, but I don’t like the medical feel of a lot of binders, as though gender expression is inherently about sickness and unhappiness. So I’m excited that I finally found a brand that treats gender variance as something inherently positive and even fun. Rebirth Garments is just that: a brand that focuses on creating trendy and fashionable lingerie for androgynous and trans folks. 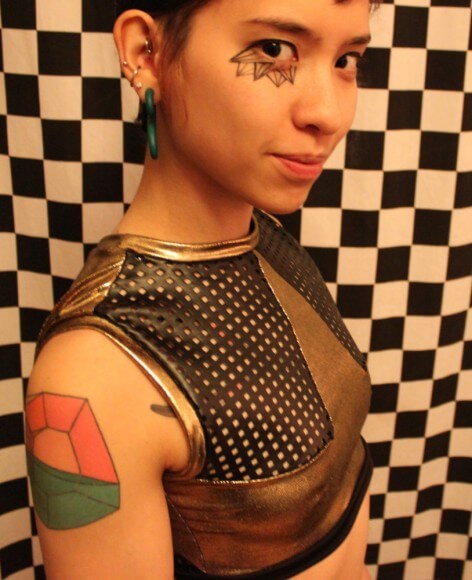 This crop top is called The Gender Warrior. I am this store's exact target audience. Via Rebirth Garments.

I’m always excited to review shops, but perhaps especially excited about Rebirth Garments because I’ve never seen a brand confront gender in such a playful way before. There’s also clearly a lot of queer theory informing this brand’s ideals. Along with my order confirmation for a pleather binder, I received a link to “A Queercrip Dress Reform Movement Manifesto,” a document that quotes Jean-Paul Sartre, Toni Morrison, and the Rational Dress Movement of the 19th century. It’s a bit of a read, and it’s certainly not going to be everyone’s cup of tea, but it is mine. In this manifesto, brand designer Sky Cubacub emphasizes that they want their line of clothing to move away from “covering up” gender variance, making it invisible, treating it as a disability to be hidden. Moving away from the one-size-fits-all model, Sky hopes to make each piece of clothing for the body of the wearer, and says that they are very open to customization to accommodate disabilities or sizing concerns. 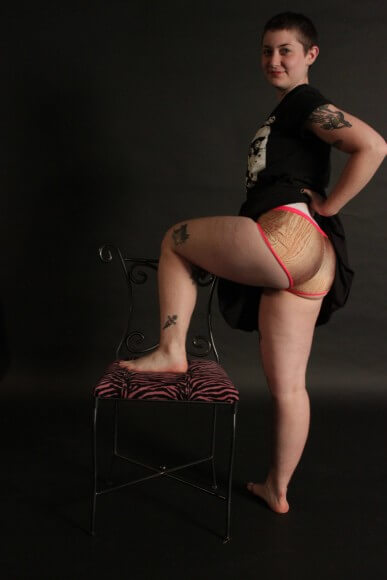 And they make woodgrain underpants, which is kind of blowing my mind. Via Rebirth Garments.

In looking at the product line and at the statements of intent on the Etsy shop’s page, I was curious in particular about one item: the Faux Leather Binder. I had a few concerns about the feasibility of a binder that was so small and had so little apparent support. But what’s the point of testing lingerie if you’re only going to try stuff you know will work? And besides, with customizable trim and pleather mesh, it was easily my favorite item in the store. 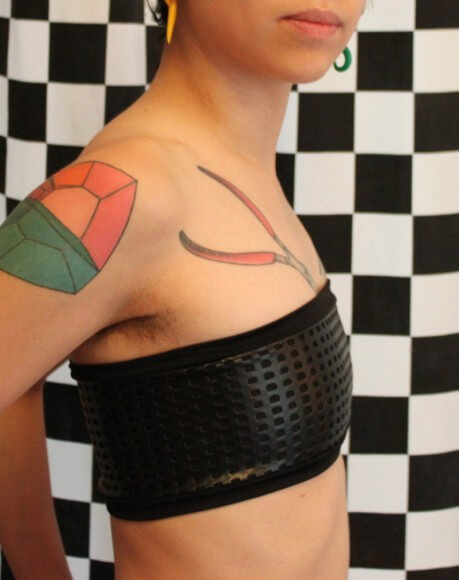 The whole ordering process went smoothly, which I feel speaks well of a brand. In a brief conversation with Sky, I was offered my choice of three fits for the binder: tight binding, loose binding, or a sports bra-style fit; I went with loose binding because I already have tight binders and sometimes you’re just not in the mood for that, y’know? The shipping policies said that the item would ship in 3-4 weeks, but I received mine in eight days --- a pretty quick turnaround time for a made-to-order garment. I’m always happy when things show up sooner than I expect.

I wasn't able to get a good sense of the quality from the Etsy photos, so I was relieved to find that it was high; the materials didn't feel shoddy and the stitching was good (which shouldn't be a question, except sometimes it is). I was concerned about fit at first because of how small the binder looked. As with pretty much every binder I’ve ever worn, it was a struggle to put on, but once I got it where I wanted it, it looked and felt great. The loose bind is, in fact, loose; it minimizes but doesn’t completely flatten my chest. If you’re a C cup or above and you’re looking to not notice your chest at all, I’d suggest going with the tighter bind. 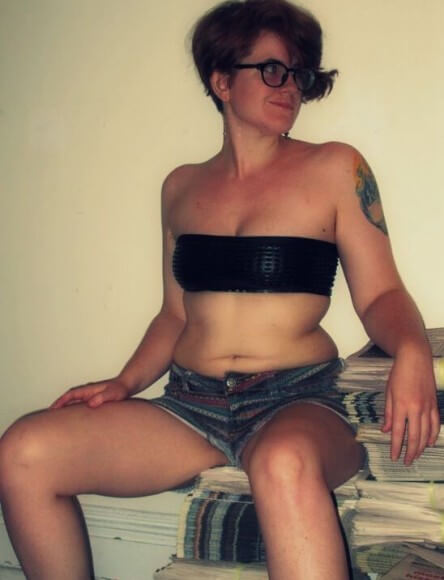 It minimizes breasts but it doesn't completely eliminate them. I sort of like that for casual binding; your mileage may vary. Photo by Kat McNeal.

There is one downside that I’ve experienced with this particular binder. It doesn’t have shoulder straps, and like any strapless thing, it’s not going to stay in place forever without help. This is not a set-and-forget piece of clothing. I bent over to pet a dog and felt the binder roll down to somewhere just above my waist. It’s a definite problem if you have major anxieties about your binder coming off (which is completely reasonable). Luckily this is a custom shop; if I were to order again, I’d ask that this binder be customized to be a little longer, or I’d ask for some small elastic shoulder straps. 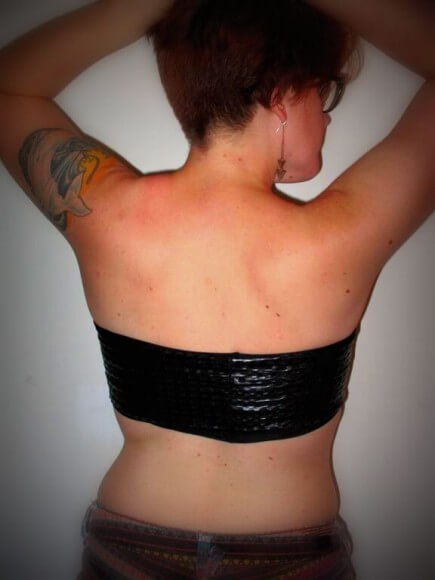 Other than the bending-over thing, which is admittedly annoying, I’ve been really enjoying this binder. I immediately took it to a Hozier concert and jumped up and down in the rain for several hours; it didn’t ride down when jumping, oddly enough, and only required adjusting about midway through the night. In the two or three days that I’ve had it, this poor binder has been rained on, dried quickly in a hot car, rained on a second time, and put through the washing machine with a bunch of jeans and damp towels. It came out of all of this just fine, pleather and all. I also got rave reviews from everyone who saw it; it was called both “sexy” and “punk rock”, and that’s basically what I want to hear all the time. Mission accomplished. 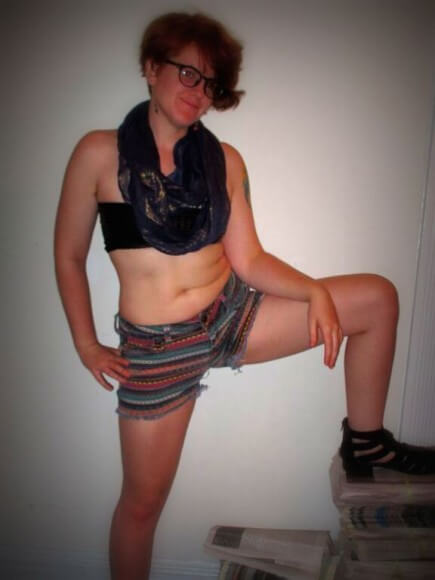 I think this is what being a badass looks like? Photo by Kat McNeal.

I’d recommend this particular product only for people like me: people who experience enough dysphoria to want to bind, but who aren’t going to feel totally crushed if their binding comes unbound. However, I'd recommend Rebirth Garments for anyone who wants fun custom lingerie made by and for queer folks. I will say that your experience with Rebirth will probably go better if you’re willing to specify exactly what you want to get out of a particular product. Definitely ask what Rebirth Garments can do for you; they’re clearly good at their work and want to see queer folks look their best.