Before there were underwear campaigns to Legalize Gay, before lines like Play Out and TomboyX made boxers for women, before Shane on The L Word modeled (fictionally) in Hugo Boss briefs, there was Jenny Shimizu. So beautiful that the first time they met, Angelina Jolie both fell in love and assumed that she’d lost an acting job they’d been auditioning for. So unapologetically butch that she has stated she even feels “too conservative” in button-down shirts. And, to me, one of the greatest lingerie inspirations of the 20th century.

Jenny Shimizu has said of her career: “I’m Japanese, 5’7″, a dyke, tattooed, have little hair, and I don’t wear feminine clothes…no one like me had paved the way." I became attracted to her work first because of her insistence on an intersectional view of herself. Whenever she talks about her childhood in California, or is asked (which is often) by gay publications about whether it was hard growing up gay, she makes it clear that being Japanese was more of a factor. She emphasizes that the aura of “difference” around her was multi-faceted. 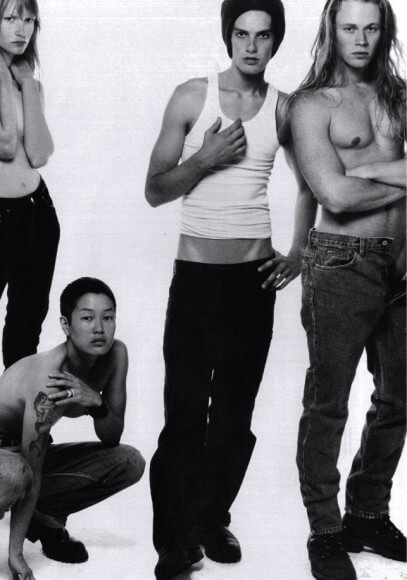 Her particular blend of difference ended up attracting a lot of attention. While working as a car mechanic, Shimizu was discovered at a Los Angeles nightclub and quickly became famous for her androgynous (and in fact openly gay) look.  Some of her most famous work has been for Calvin Klein, where she modeled in ads for jeans, fragrances, and their signature briefs. She made it not only tolerable but glamorous for a woman to wear masculine underthings. She also popularized a brand of quiet butch confidence that has become a staple of queer lingerie ads. 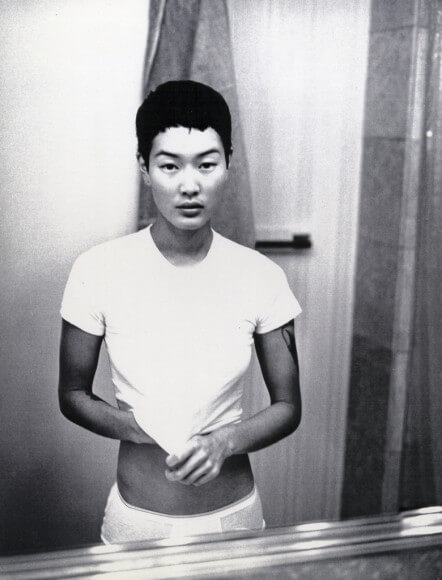 For an example we can turn to the image above. It’s from a Calvin Klein ad, and it features Shimizu staring seductively at the viewer, hands up under her shirt. There's some nervousness and some curiosity in her gaze. At first this appears to be a very conventional lingerie-world pose: the model, looking at us, inviting us in, perhaps a little tentatively. But if you look a little longer, you realize that Shimizu is posing in a mirror. Shimizu isn’t looking at us; she’s checking herself out, and she likes what she sees.

Over the years, Shimizu’s unfailing self-confidence has become a staple of the way she’s portrayed in spreads ranging from lingerie to outerwear. At a catwalk show, Jean Paul Gaultier ripped the sleeve off of one of his dresses (representing days or weeks of careful design and tailoring) so that Shimizu’s pinup tattoo of a girl straddling a wrench would be visible. Something about Shimizu makes the fashion industry want to bend their clothes to accommodate her body and her styling, instead of treating her like a blank slate on which to impose a Look. 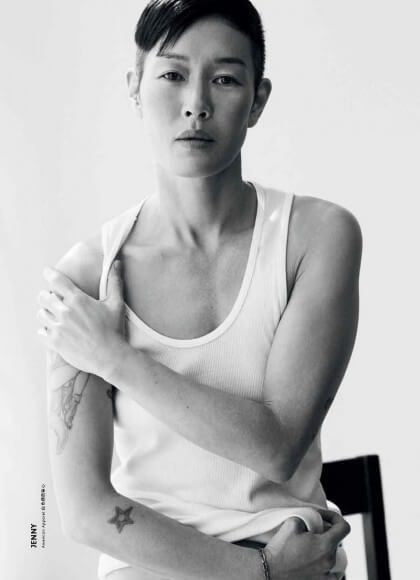 Another stylistic choice worth talking about, especially when talking lingerie: Jenny Shimizu is almost never seen in a bra. A lot of  her images contrast masculinity and femininity, and the choice to be braless is in many ways the ultimate androgynous move: it reveals the breasts but treats them like no big deal. The Lingerie Addict has talked before about bralessness as a valid option; if you’ve been thinking about trying it as a lifestyle, let Shimizu be your inspiration. She is not an especially small-busted or high-busted woman, and she does it all the time, and she looks amazing. 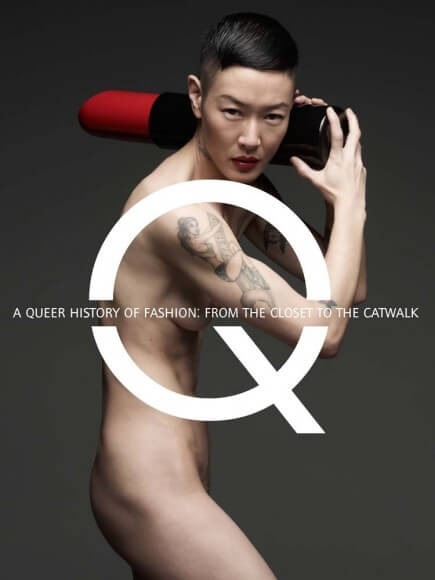 At 47, Jenny Shimizu is no longer modeling on the regular. However, she occasionally appears in places like Vogue, most recently with wife Michelle Harper. She was also recently featured in the press for the Queer History of Fashion exhibition at FIT. I’d love to see her make a resurgence as a lingerie model: we need more queer icons who aren't in their teens and twenties, and I think Shimizu is just the person to demonstrate that androgyny is as viable at 40 as it is at 20.