Kansas Bans Using Welfare to Pay for Lingerie: Why That's a Problem for Poor People

Kansas Bans Using Welfare to Pay for Lingerie: Why That's a Problem for Poor People

By Cora Harrington April 16, 2015 in featured 15 comments
Share this article 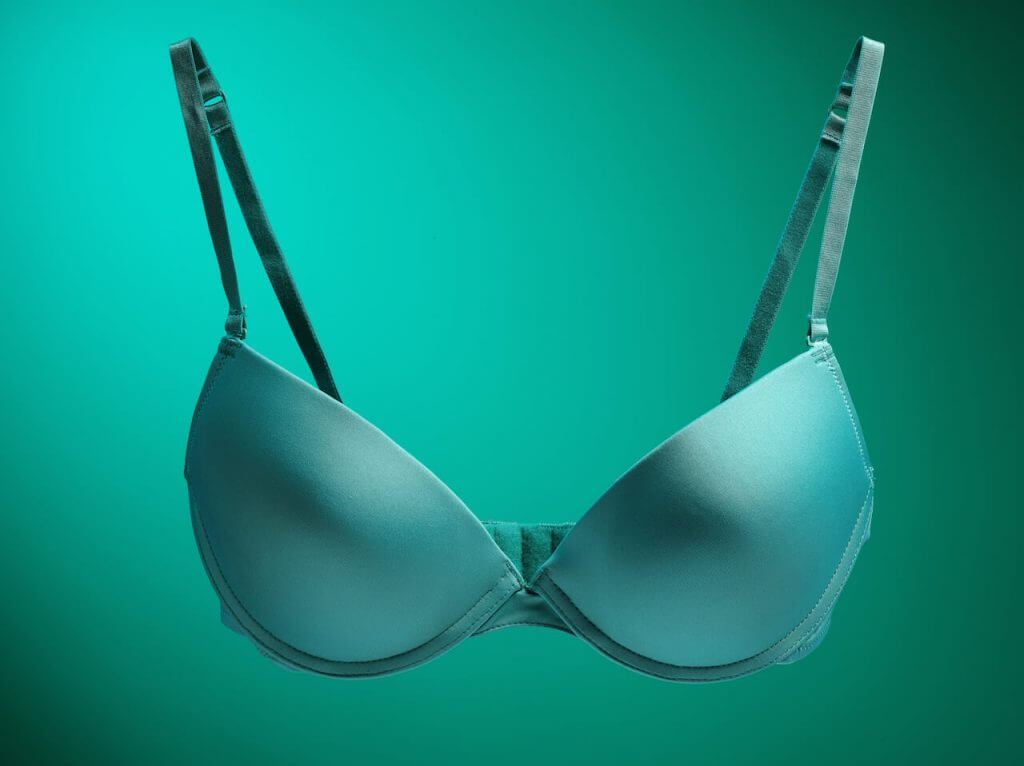 Kansas, that rectangular-shaped state smack dab in the middle of the continental United States, is making headlines this morning for passing several new rules regarding the spending of welfare benefits.

According to the Associated Press, Kansas' State Legislature has enacted the most restrictive/prohibitive rules in the country for those receiving cash assistance. You can view the entire 25-page bill here, but I'd like to draw your attention to paragraph #14 on page 9, which I've copied and pasted below:

No TANF cash assistance shall be used to purchase alcohol, cigarettes, tobacco products, lottery tickets, concert tickets, professional or collegiate sporting event tickets or tickets for other entertainment events intended for the general public or sexually oriented adult materials. No TANF cash assistance shall be used in any retail liquor store, casino,gaming establishment, jewelry store, tattoo parlor, massage parlor, body piercing parlor, spa, nail salon, lingerie shop, tobacco paraphernalia store, vapor cigarette store, psychic or fortune telling business, bail bond company, video arcade, movie theater, swimming pool, cruise ship, theme park, dog or horse racing facility, parimutuel facility, or sexually oriented business or any retail establishment which provides adult-oriented entertainment in which performers disrobe or perform in an unclothed state for entertainment, or in any business or retail establishment where minors under age 18 are not permitted. TANF cash assistance transactions for cash withdrawals from automated teller machines shall be limited to $25, per transaction and to one transaction per day. No TANF cash assistance shall be used for purchases at points of sale outside the state of Kansas.

In there among the ban on buying lottery tickets, lap dances, and body piercings with TANF benefits are two little words that could have a profound effect on someone's ability to find a job, and, ultimately, stop using welfare (which, after all, is the goal of the program). Those two words? A ban on using benefits in lingerie shops.

Without doing a comprehensive unpacking of the myriad of concerns with this bill (welfare fraud is extremely low; punishing the poor is not particularly helpful; most welfare recipients are children), I'd like to focus on the lingerie ban in particular.

At the surface, I can certainly decipher the thought process behind including lingerie in the bill, though I obviously don't agree with it. Lingerie is about sex, right? And we don't want to use government benefits to subsidize people's sex lives, right? So let's ban all lingerie purchases of any kind using TANF. Problem solved! However, that logic is short-sighted, and several other areas of the bill reveal why:

TANF mandatory work program applicants and recipients shall participate in work components that lead to competitive, integrated employment. Components are defined by the federal government as being either primary or secondary. In order to meet federal work participation requirements, households need to meet at least 30 hours of participation per week, at least 20 hours of which need to be primary...

Single parent families with a child under age six meet the federal participation requirement if the parent is engaged in work or work activities for at least 20 hours per week in a primary work component.

in determining and maintaining eligibility for non-TANF childcare, requiring that all included adults shall be employed a minimum of 20 hours per week or more as defined by the secretary...

The time on food assistance for able-bodied adults aged 18 through 49 without dependents in the household shall be limited to three months in a 36-month period if such adults are not meeting the requirements imposed by the U.S. department of agriculture that they must work for at least 20 hours per week or participate in a federally approved work program or its equivalent...

In order to receive benefits, whether of cash, childcare, or food, welfare recipients must work a minimum of 20 hours per week (or be looking for work or be involved in job training). Now, it's been a minute since I've been employed by someone else, but if I recall correctly, wearing a bra if you have breasts is pretty much seen as a social requirement.

Lingerie is a weird part of fashion because there are all these unstated rules that you just understand if you grow up around them, but that are completely opaque and unknowable if you don't (this is what we usually shorthand to "culture"). And let me be clear, I am not in the "every woman should wear a bra all the time" camp. I firmly believe the choice of wearing or not wearing a bra should always be up to the individual person.

However, I'm also very familiar with the stigma that surrounds going braless or wearing what's perceived as an inappropriate or poorly-fitting bra. Even within the lingerie community which, ostensibly, should know better, there's been a distressing amount of mocking people who are in the "wrong size."

Because of our culture's stance on bra wearing, many people have no idea what breasts look like without some kind of external structure, frame, or support. Yet many of these same people would tell you it's inappropriate, sloppy, unprofessional, overtly sexual, or just "looks wrong" for certain folks to walk around braless.

So tell me, if someone who is already in dire financial straits is unable to use their benefits to buy the appropriate professional undergarments, how are they supposed to get a job?

I imagine my more internet-savvy readers will say to use one of the many braswap or bra buying communities online, or even to shop from eBay where a wide selection of bras can be found cheaply.

However, internet access is still a luxury for many of the poor, and while there are plans to offer subsidized internet to lower income communities, those plans are still very much in the early stages. And honestly, many people still aren't comfortable buying lingerie online, and that's okay.

So what about thrift stores like Goodwill? Surely, if you're poor, that's where you should buy your bras from anyway, right? Well, all other concerns placed to the side for now, the selection in thrift stores is often inadequate. Fellow lingerie blogger Wide Curves had this to say: 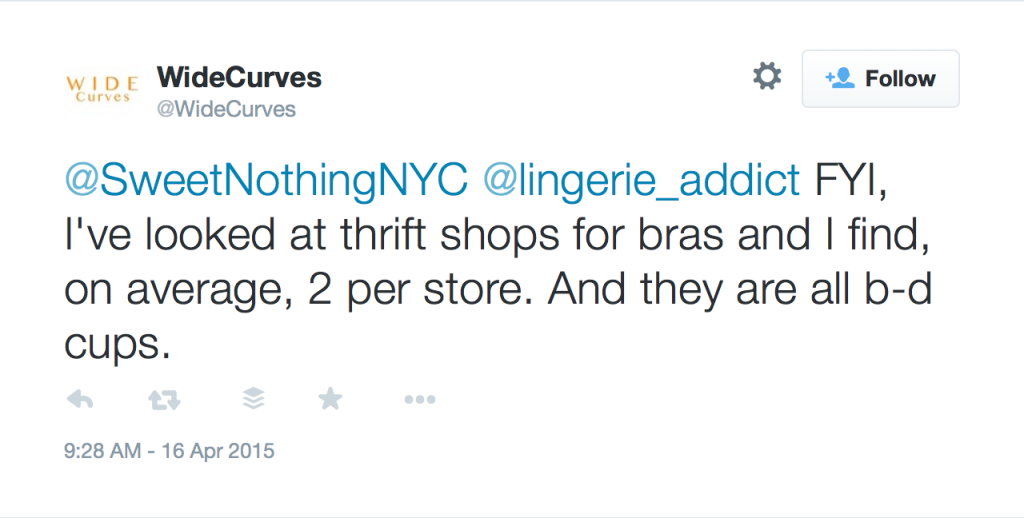 If a woman wears an A cup or a G cup, Goodwill is not likely to meet her needs. As a thrift store, they're simply not equipped to offer the range of options a dedicated lingerie store can.

Edit: Several people have mentioned that department stores as well as discount retailers like TJ Maxx, Burlington Coat Factory, Target, and H&M are all options, and that's an excellent point. However, many of these retailers still have a very limited size range, and buying options are a bit of a crapshoot.

If you wear cup sizes B-D, those are all great choices, but, once again, if you're outside of core sizes (or, if you have special needs), you're out of luck. My issue with this ruling is two-fold: 1) it limits options, most especially for women who already face a rather restricted set of choices to begin with and 2) it equates lingerie to gambling, alcohol, tattoos, and pornography. This article isn't about saying people should use their welfare benefits at La Perla or Agent Provocateur...but that wasn't going to happen anyway. Rather, it's about acknowledging that this bill makes certain assumptions which could adversely affect women (and results in a de facto ban on buying lingerie if you happen to be outside core sizing).

Look, this article isn't about saying welfare benefits should be some kind of anything goes free-for-all, but that was never happening anyway. The overwhelming majority of people receiving benefits have them because they need them. One of my previous jobs was as a caseworker working with women who were transitioning off of public assistance, and it is hard enough as-is to find a job when you're poor. Why is the government passing rules to make it even harder, intentionally or otherwise?

While a bra may seem like a luxury item to some, when you're in the workforce, it's a necessity. No matter how much I wish people could go braless whenever they pleased, I know that doesn't match with reality. I know there are real, tangible, financial consequences to not having what are seen as the appropriate undergarments for work. If you need an analogy, this is like saying you can't use cash assistance to buy tampons, pads, or toilet paper. Sometimes, the idea of what constitutes a "luxury" is in the eye of the beholder.

What do you think of this new legislation? Do you have any thoughts on how the stigma surrounding lingerie can lead to real social consequences?