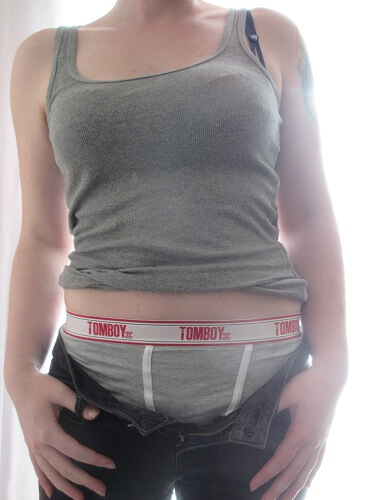 Disclosure: The products described were given to me by TomboyExchange for review purposes. This review contains my own opinions of these products. I received no monetary compensation for this review.

Underwear for nonbinary people, or for people with unconventional gender presentations, can be really hard (as I’ve said a few times already). So it’s always great to see a company working to distinguish itself from traditional feminine underwear design to create something a little different. TomboyExchange is doing some great things in that respect. Their line of underwear, TomboyX, focuses on "unconventional" women, and the models mostly appear to be older women and/or butch women, which I appreciate. They also have some adorable videos on their website of a gruff butch woman wear-testing their underwear line and vouching for its quality. To be honest, I felt very little doubt that the product would be great. 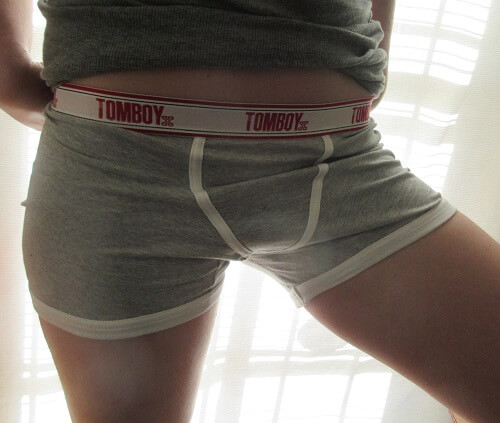 They sent me two pairs of TomboyX boxer briefs to review: their “Good Carma” boxer briefs (in red) and their “Feeling Frisky” boxer briefs in (in grey). I went with a medium, as per their site’s size charts, which are extensive and include comparisons to sizes from men's brands: 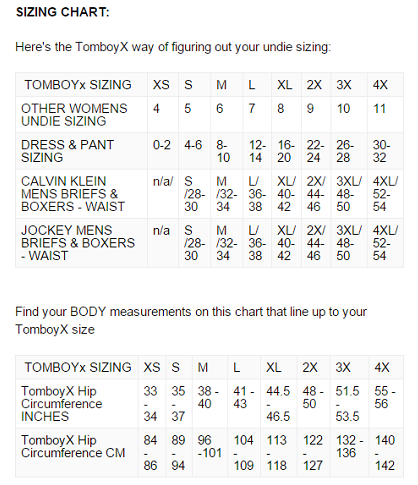 The most thorough size chart I've ever seen. Via TomboyX.com

Since a lot of AFAB people who present masculine have already bought men's underwear, this size chart is a great way to help people figure out their size based on what they already own. It's also a good reminder that these briefs are being created by people who understand the search for masculine underwear. It’s a good way to say “we know what you’ve tried already, and we've tried it too, but our product is better.” 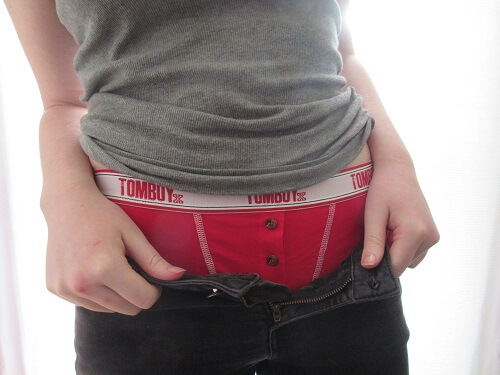 In a lot of ways, it is better. These boxer briefs are designed to fit someone with my body shape; there’s a curve to the hip of the boxer briefs in each pair, so they’re not so uncomfortably tight and they don’t ride up the way men's boxer briefs tend to. They’re also not as long as a lot of boxer briefs for men are, so they don’t come down dangerously close to my knees. And the styling is a very close visual analogue to the men’s products they’re hoping to compete with, with the labeled waistband and contrast piping. 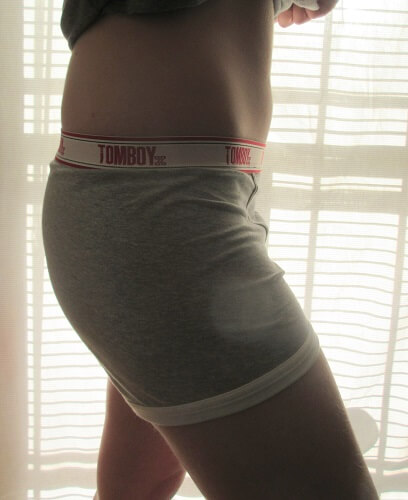 The fit is amazing for me. Photo by Kat McNeal.

There’s some small details that gear this product very much toward women, rather than more masculine butches or nonbinary folks or trans men. The Good Carma boxer briefs have a button fly, but it's sewn shut, with no buttonholes. The Feeling Frisky boxer briefs, similarly, have no double-overlap flap like men's boxers often do. Their briefs don't have one either. That means that if you wear a packer, or if you're just the kind of human that wants to have a fly (possibly so your cutie of choice can unbutton it), this isn't going to work for you. TomboyX's marketing definitely focuses on masculine women, rather than nonbinary or trans people, so I suppose this shouldn't come as a surprise. But I do have feelings about trans representation and I'd love to see more brands I love acknowledging it. 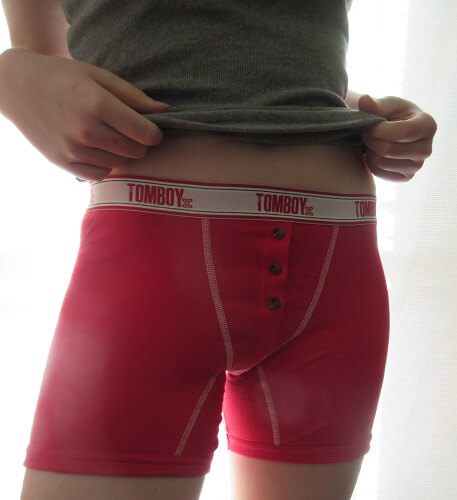 Which is not to say I didn't like them -- on the contrary, I thought they were great. When I put them on, I didn't want to take them off. They held up well to washing. They're attractive and they fit under both girl pants and guy pants, and I'm pretty sure my girlfriend is obsessed with them. I still stare wistfully at that button fly that doesn't unbutton, but if that doesn't bother you, I'd definitely say give them a try. Their price point is around $25 for boxers and $14 for their briefs, which feels like a little much if you're used to buying men's underwear in 3-packs -- but the quality means you'll get a lot of wear for your money. Overall I'm satisfied, and I'm looking forward to seeing what TomboyX does next.