The Oxford Conference of Corsetry in Review 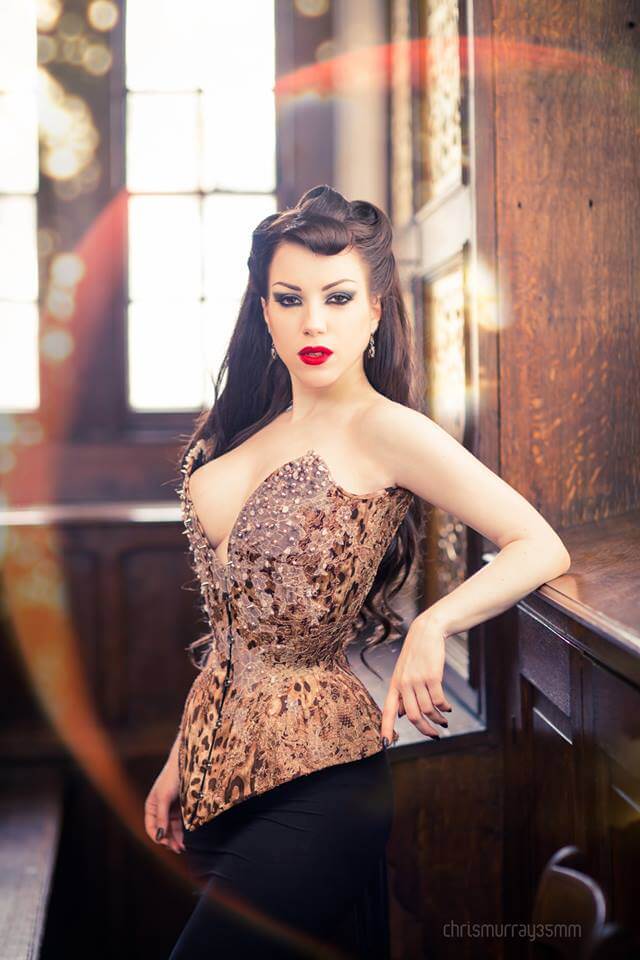 Morgana modeling a Sparklewren corset on the grounds of Jesus College. Photo by Chris Murray.

The Oxford Conference of Corsetry was so amazing that I don't even know where to begin. Let's start with the basics: The Oxford Conference of Corsetry, aka OCOC, was organized by Julia Bremble of Sew Curvy, and took place over the weekend of August 24th and 25th at Jesus College in England. We had workshops, photoshoots, media coverage, and basically talked about corsets nonstop during all of our waking hours. I (Marianne Faulkner of Pop Antique) was a speaker/model at the conference along with Jenni Hampshire of Sparklewren, Alison Campbell of Crikey Aphrodite, and Gerry Quinton of Morúa Corsetry. 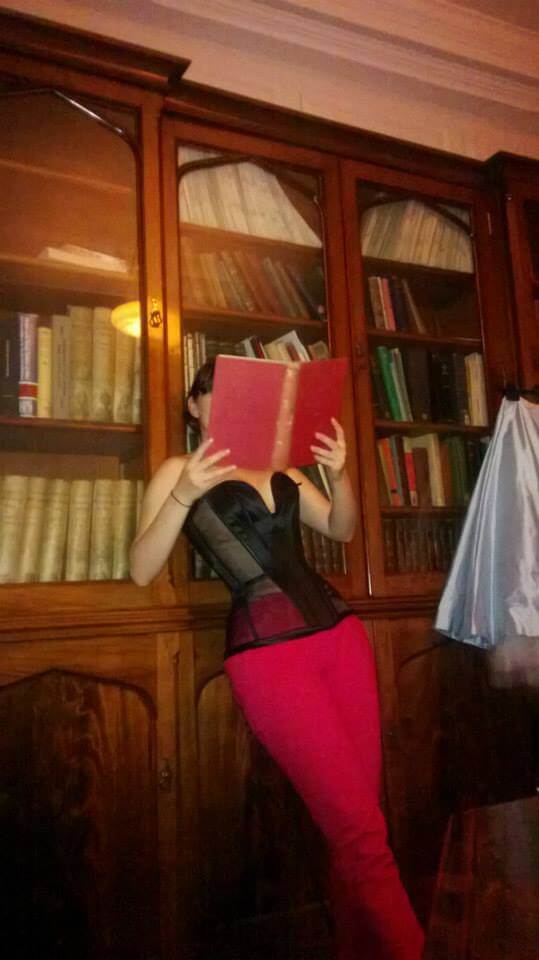 Playing around in the Fellows Room on Friday night, trying on ALL the corsets. This one by Julia's line, Clessidra Couture. Photo by Alison Campbell.

On Friday, the early arrivals came and the speakers set up the conference rooms. This was my first introduction to Gerry, my second time hanging out with Jenni and Alison, and my first time properly meeting Julia. I myself was jetlagged, fresh off the bus from London that followed the overnight flight from San Francisco, but this didn't stop me from staying up until 2:00am, talking shop and trying on corsets. 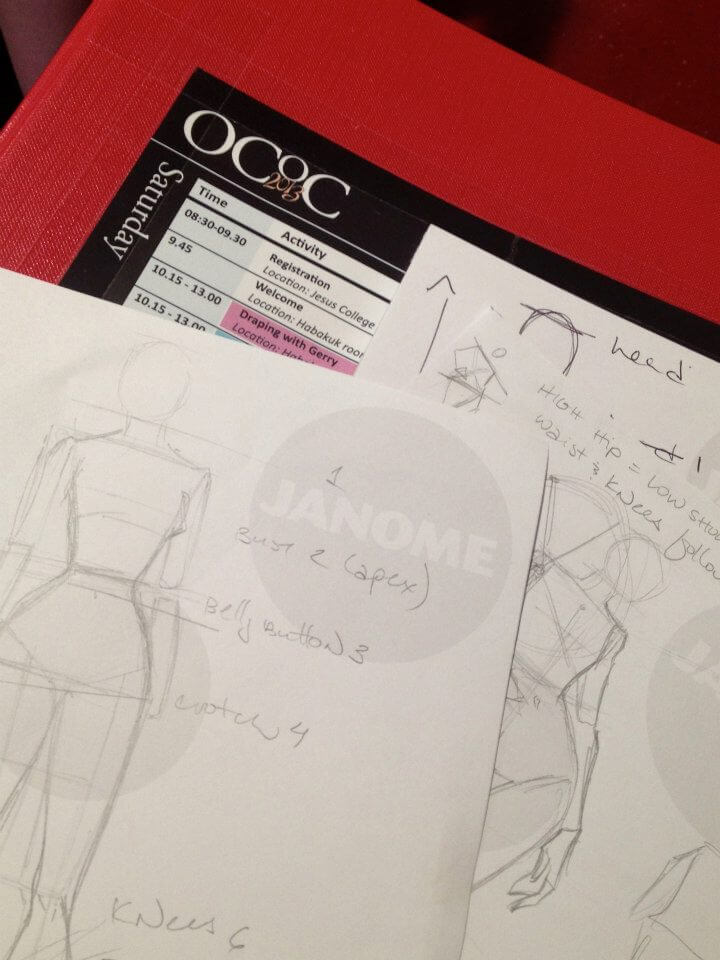 Drop-in sketching lesson: I gave Julia some personalized tutoring and got newly reinspired to write a fashion illustration textbook.  Photo by Julia Bremble.

Saturday
Saturday was our most structured day. Jenni and I checked in arrivals, Julia gave a speech, and then it was time for workshops! We had two scheduled workshops: draping with Gerry, and fitting with Alison. Drop-in events included my fashion illustration workshop, the embellishment bar/swap, and the corsetry clinic. We were featured on BBC "In Pictures," and the lovely Morgana came early to hang out with us. We had a drinks reception where many of us (myself included) tried Pimm's for the first time. "Dinner is served when you are ready, ladies," we were told before being served a delicious three-course meal. For me, the highlight of the day was the post-dinner keynote speech by Mr. Ian Frazer Wallace, a corsetiere who has collaborated with several talented catwalk designers. You may have seen his work without even knowing it: check out this stunning video of Immodesty Blaize in a layered corset gown by Ziad Ghanem. Mr. Wallace was also accompanied by his delightful and singular muse, Polly Fey, who can be seen in the video as the second model in the final line up walk. After his speech, Mr. Wallace and Polly stuck around, accompanying us to the on-campus bar (who even knew that was a thing?  Ahhh, England...) where we continued to talk shop and Polly even threw on my new "Minx" ribbon waspie over her gorgeous couture gown. 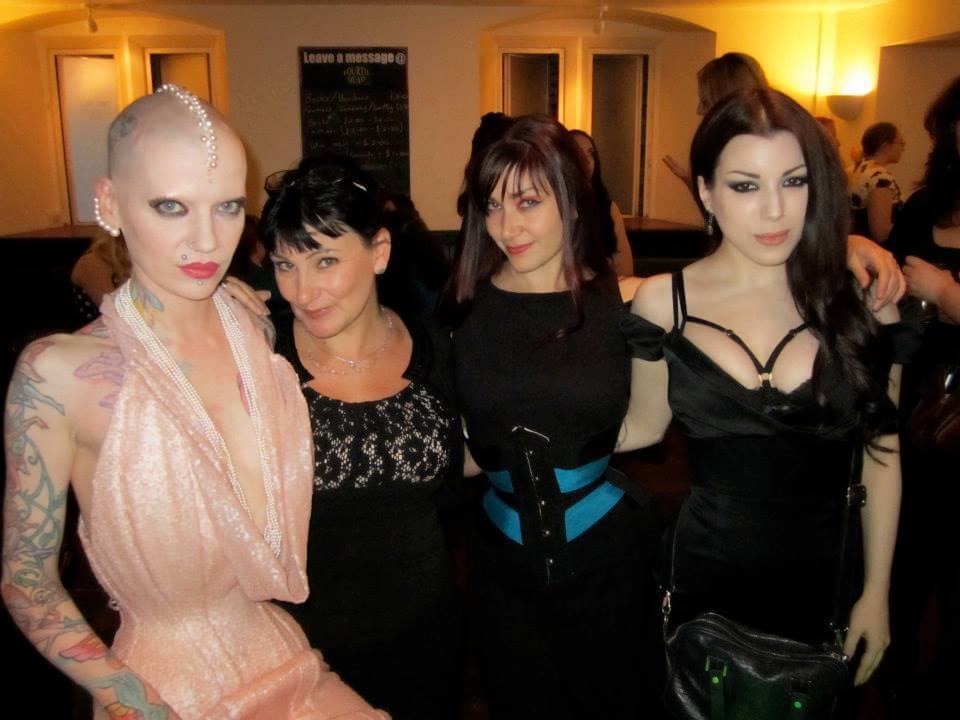 Polly Fey, Julia Bremble, Marianne Faulkner (me), and Morgana, out for drinks after the keynote speech. Polly's pink-and-pearls ensemble had me enthralled all evening.  Photo via Julia Bremble.

Sunday
...was a day filled with, primarily, photoshoots! And beautiful antiques, and sad, sad goodbyes, as none of us wanted the conference to end. Morgana and my alter-ego Victoria Dagger modeled for enough corsetieres to make my head spin, including squeezing in brief shoots for Clessidra, Morúa, Crikey Aphrodite, and Sparklewren. (Sadly, I was the only speaker to not shoot one of my designs at the conference.) The Oxford Mail visited us and wrote up a feature, catching Morgana in a Neon Duchess creation as well as the antique corset exhibit (the Symington Collection, sponsored by Foundations Revealed). 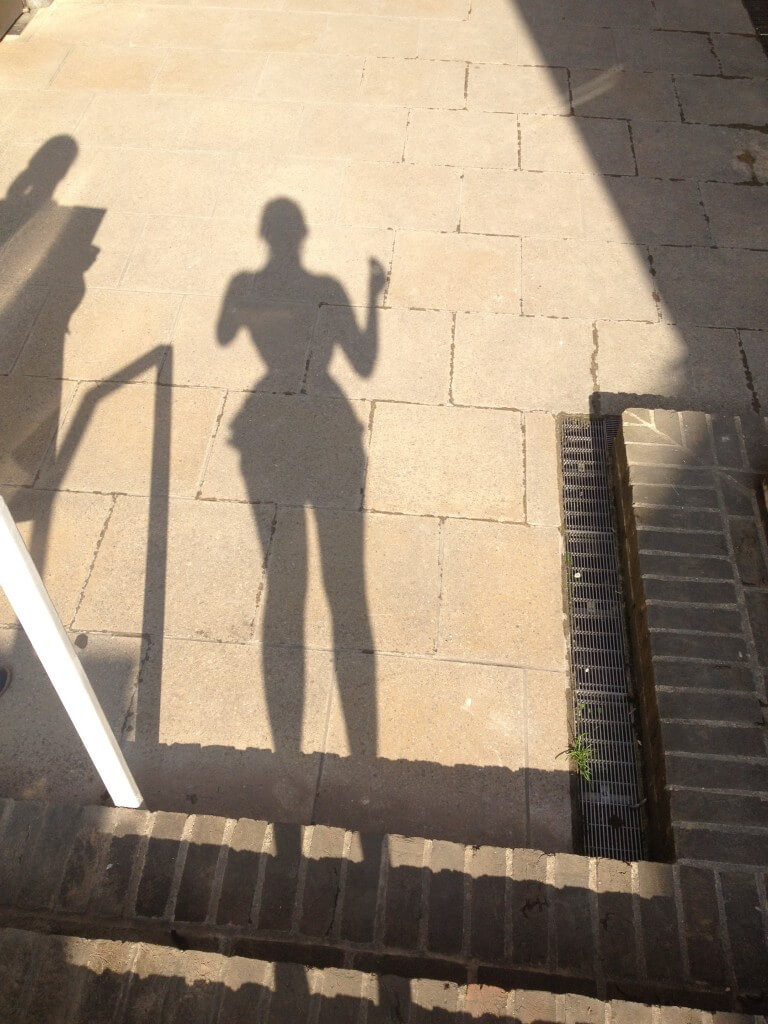 Silhouetted in a Morúa corset for the last shoot of the day. 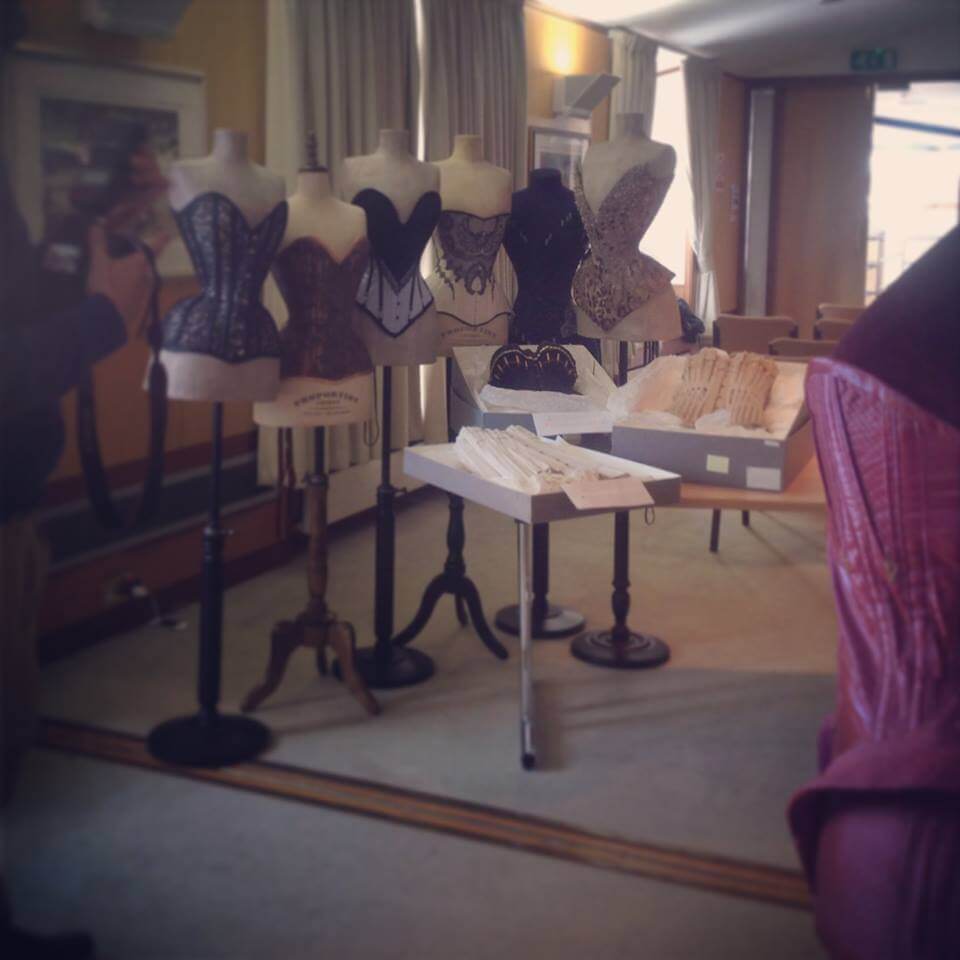 Contemporary and antique corsets on display. Photo by Jenni Hampshire.

All told, it was an incredibly amazing weekend (which I, for one, prolonged by spending Monday in Birmingham with Jenni at the Sparklewren boutique, and Tuesday in London where I met up with The Lingerie Addict's own Karolina Laskowska). The number of times we started a sentence with, "Next year..." increased daily. And I'm pleased to report that there will officially be a next year! Julia has reserved the August bank holiday date for 2014 at Jesus College.

Did you attend this year? Are you planning to attend next year? Share your thoughts in the comments below.  For more corset photos, check out the Facebook page and Instagram hashtag. If you attended, please link to your Facebook page or what have you below so everyone can check out your work! 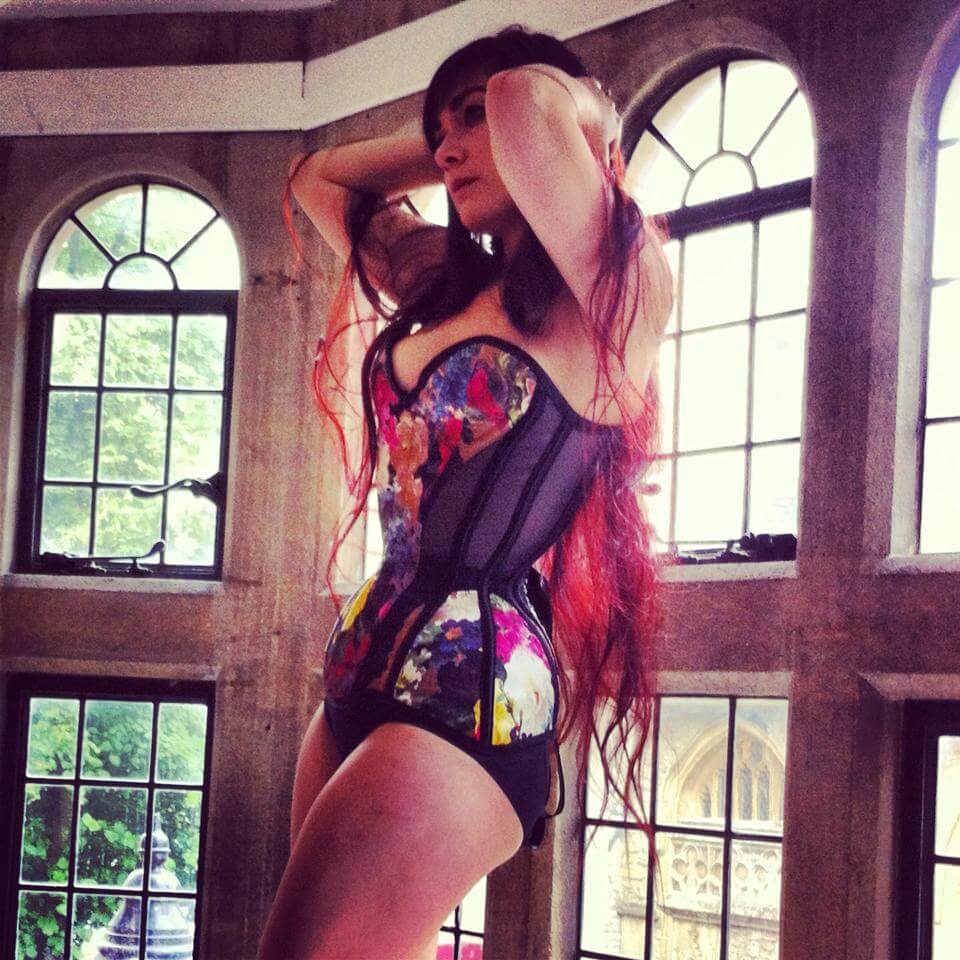 Modeling an Angela Stringer mesh corset. Photo by Angela, behind the scenes shooting with Paul Mockford.