My First Month in Lingerie College: Adventures in the Machine Room

By Karolina Laskowska November 10, 2011 in team 14 comments
Share this article 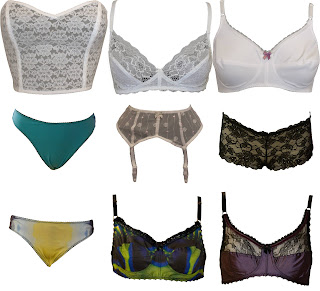 So it seems that I’ve officially been a Contour Fashion student for over a month now – how time flies! The past few weeks have been almost a complete overload of information and yet this is only the tip of the iceberg. I thought I knew a fair amount about lingerie before starting the course, but I seem to be realising I knew next to nothing at all….

I’ve been puzzling for quite a few days now over how to share my experiences so far with the readers of this blog! I’m still overwhelmed by how much I’ve already learned, so I’ve decided to introduce you to my new acquaintances in the machine room and the garments I’ve made so far.

One of my greatest fears upon starting the course was admittedly the machine room. The industrial sewing machines have always struck me as far more threatening than my relatively compact domestic. Some of them only seem to function at hyper speed, so I’m always wary of losing the odd finger. 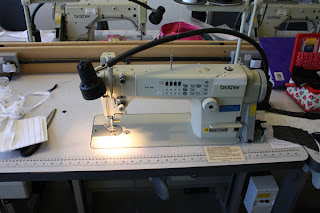 So here’s the first one I met: the lockstitch machine. It’s possibly the friendliest of the lot, but that’s not saying much. I was surprised at just how much this varied to a domestic machine – the analogy our tutor used is that of a car which I actually find very accurate! Using this felt like learning clutch control all over again. This is the machine that’s responsible for the straight stitch that you’ll find in almost all of your clothing – also known as a lockstitch, hence the machine’s name! 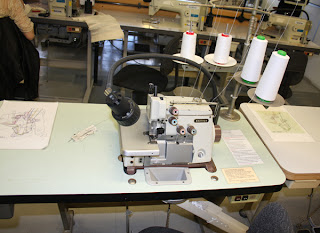 The second piece of equipment to make my acquaintance was the overlocker (also known as a serger in the US). This is the machine that’s responsible for fabric edges, especially in stretch fabrics such as jersey. I am particularly wary of it knowing that it has a blade that cuts the fabric whilst you sew… 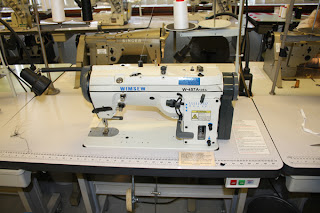 The third one I became friendly with was the three-point stitch machine. This is what is used to sew in elastics – the zig zag stitch means it all stays stretchy, a feature that’s particularly crucial in lingerie! 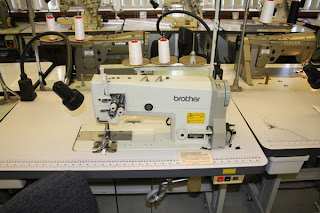 And then the final machines, which I hadn’t even known existed: the bone caser/taping machine. These have made construction so much easier than I expected. They have twin needles and cover seams with either tape or bone casing – a complete must in the world of underthings!

We all started off very gently in the machine room, at first only tracing wavy lines on a piece of paper with the lockstitch machine to learn some basic control. It was then, in our first properly taught week, that we got started on our first garment: a basic bustier.

Now, although I’ve made various pieces of lingerie before, it has never been done ‘properly.’ My method has always been to make things up as I go along and hope for the best!

Now I’m learning to make everything to a certain size (the industry standard 34B) so that everything can be adapted to create other sizes. A big change to simply pinning things to my own body so they fit! So without further ado, here are the first three pieces I’ve learned to make…. 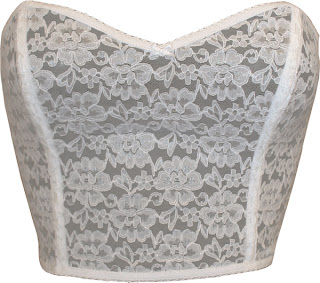 Bustier – Admittedly not the prettiest piece of lingerie, but this was our introduction to a lot of the machines mentioned above. It was also our introduction to the importance of precision – lingerie seam allowance is usually only 6mm – quite a difference to the 1cm of outerwear! 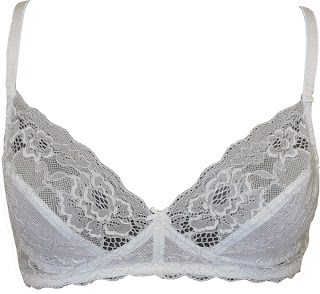 Soft bra – Probably the most basic bra possible, yet also my favourite out of everything I’ve made so far. Not at all supportive, but nevertheless very feminine and delicate. It was with this bra that we were introduced to stretch fabrics and the various ways they can be manipulated. Although this bra is made of the same stretchy lace throughout, certain parts have been backed onto denier – a stabilising rigid fabric. 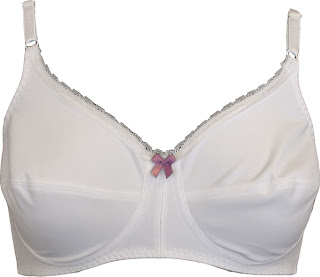 Medium Support Bra – Now, despite its funny shape, bras like this are supposedly some of the comfiest ones around. This bra’s shape is very closely modelled on Triumph’s ‘Doreen’ bra – statistically the best selling bra in the world. They must be doing something right! The shape on this bra is relatively old-fashioned and is far more similar to the 1950s ideal bust shape. In the industry this is apparently referred to as a ‘beaky’ bust!

It’s a whole lot more satisfying making a piece of lingerie knowing you’ve used the correct methods and will be able to replicate it. Even though everything I’ve made on this course so far has been basic and not exactly exciting in design, I still feel very proud of them!

So there’s the first month of my life as a lingerie student. Although it might not exactly be fascinating for the average lingerie addict, I’m hoping once we get started on proper projects I’ll be able to give you a much more exciting insight into this degree!