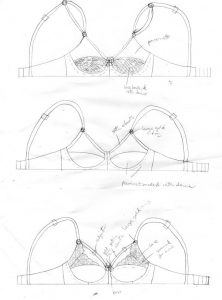 My first term of my ‘lingerie degree’ is beginning to draw to a close. It’s quite scary how time has flown by! A couple of weeks ago we began our first proper ‘design’ project: the ‘Little Black Lingerie Project.’ Up until now we’ve just been learning basic techniques so it’s almost like a test to see how much we’ve taken in.

At the beginning of term we were lucky enough to visit the Snibston Discovery Museum, home to one of the world’s largest corset collections. As much as I wanted to spend the day staring at the gorgeous corsets, that wasn’t the aim of the trip! We were meant to choose a single inspiring object and create a sketchbook based around it. This sketchbook is now acting as our project’s inspiration. 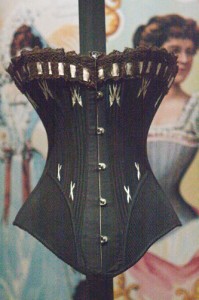 We were put into pairs with the aim of creating a bra and pair of knickers as the end product. We began by choosing our inspirational images. The object I’d found myself most inspired by was a preserved ‘Death’s Head Hawkmoth.’ I was particularly interested in the shapes in its wings, especially the strong linear patterns. 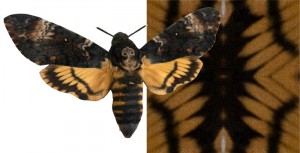 I took charge of making and designing the bra whilst my partner decided to work on the knickers. I started out with sketching a few ideas before deciding on a strappy eyelash lace demi-bra.

After plotting out the design with fashion tape, I then had to somehow transfer the designed pattern onto paper. This is done with calico, a cheap rigid fabric. It’s pinned and cut over the taped shapes and then has the pattern lines drawn on. These are then removed, trimmed off and traced onto paper. 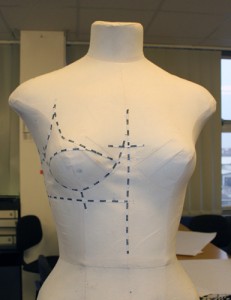 Sounds simple? If only! Unfortunately the pattern pieces taken from the mannequin will rarely work together. Once on paper, these then have to have 6mm seam allowances added to the appropriate areas. They are then cut out and ‘walked’ around to see if they fit. Unfortunately they rarely do, so an arduous process of redrawing each piece with the appropriate modifications begins. This has to go on until the pattern at least works in theory with each piece fitting together in the ‘walking’ process!

(You may also like: What Everybody Should Know About the Difference Between Real Corsets and Fake Corsets)

Unfortunately, even with a pattern that fits together perfectly, a garment may still not work. This is why toiling is always necessary. Toiling is a process in which either parts of or a whole garment are made up to test the fit. You’ll rarely use the fabrics for your final design in the toile, as these are often too expensive! Instead you’ll use cheaper ones with similar properties. Here’s a picture of my toile – using a cheap white rigid lace instead of my more costly eyelash one. 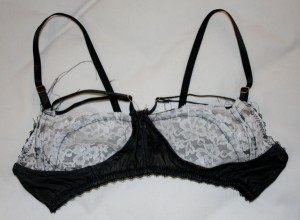 I’m very glad I finished this toile – I managed to identify lots of issues with my pattern and construction that I simply wouldn’t have been able to resolve if I’d launched straight into my final bra. Small things like seam finishes and elastic tension can make a huge difference on something so small.

(You may also like: The Look for Less: The View from the Designer)

So here is my final garment in all its glory – I’m actually very pleased with how it’s turned out considering that this was the first pattern I’d made all by myself! Unfortunately I’m nowhere near the end of this project. There are still lots of elements that you wouldn’t necessarily consider a part of the design process – highly detailed technical drawings, specification sheets, and so forth – that aren’t nearly as exciting as creating actual garments…. 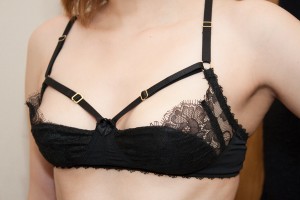 Readers: What do you think of this design process? Is it simpler than you’d imagined or could you see yourself tackling it?