The Myth of The Perfect Breast, Part 2: From The No-Bra to The T-Shirt Bra 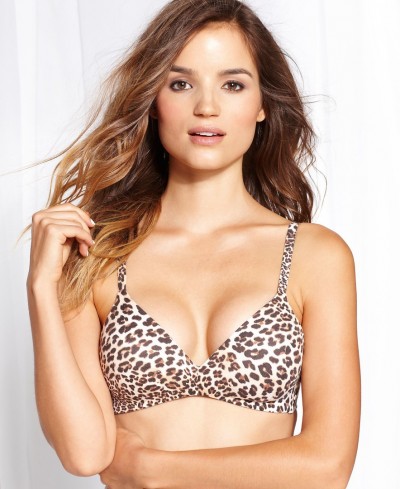 Personal preference aside, American society believes breasts should look a certain way. They should be smooth, separated, perky half-spheres that ignore gravity and have no visible nipples, else people perceive them as looking vulgar, obvious, or strange. But this preference for the gravity-defying, no-nipple look hasn’t always existed.

The first part of this series examined the changing ideals of breast shape in America, from the 1920s to the 1950s. The second part continues from the 60s to the present day, to see how styles have changed and aesthetics have evolved over the past fifty years. 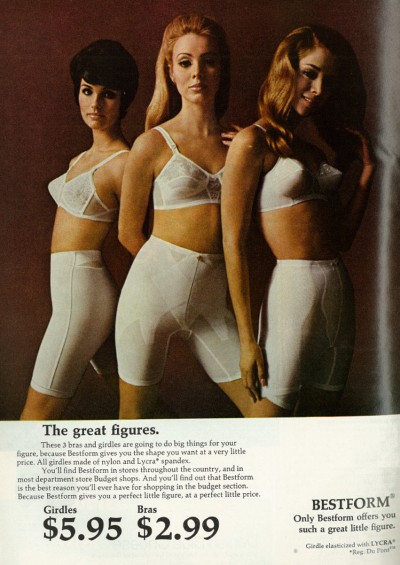 The bullet shape of the 1950s softened into the 60s, thanks in part to a new fiber called spandex, but stayed relatively pointy. 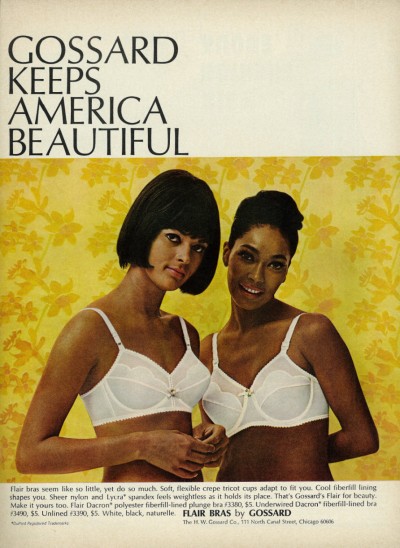 The 1960s are famous for the idea of "bra burning," where feminist activists are said to have lit their bras aflame at the 1968 Miss America pageant to make a statement about oppressive beauty standards in American society. By all accounts, no one actually burned any bras, but the idea became a relic of the time and reflects the cultural climate. Throughout the decade, many women still wore bras, especially those with full busts who wanted the support, but others still wanted a less restrictive bra. 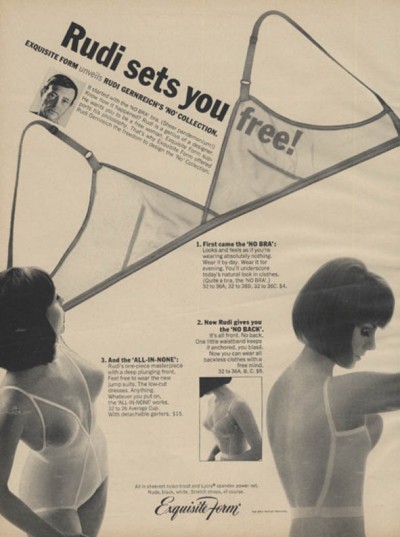 1960s Exquisite Form advertisement. Interesting that the model still has the uplifted, slightly-pointed "ideal" 60s shape under her "no bra," and what's up with the strange airbrushing on the low back model's figure? via The Jumping Frog

Women wanted liberation from their expected roles as wife and mother, and bras represented those restrictions. So Rudi Gernreich created a stir in 1964 when he invented the "no-bra bra," a two-part bralette made of newly-invented stretch mesh. 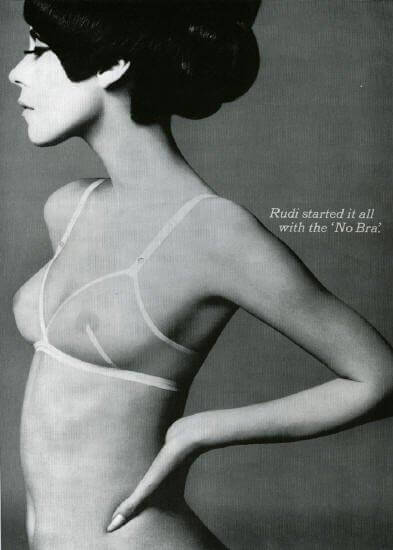 The "no bra" look was especially favored by young women, who wore it under new loose, printed dresses. 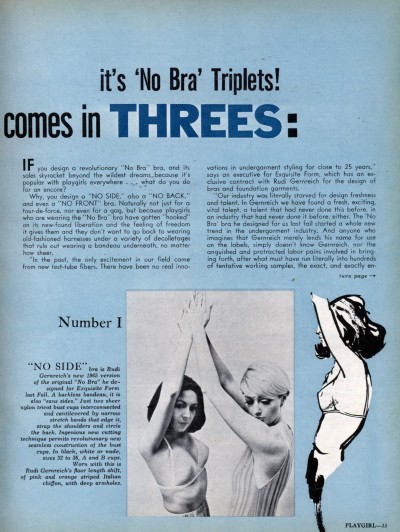 Part of a 1960s multi-page advertisement for variations on the No Bra. "...playgirls who are wearing the “No Bra” bra have gotten “hooked” on its new-found liberation and the feeling of freedom it gives them and they don’t want to go back to wearing old-fashioned harnesses..." via Modern Mechanix

Structured bras with their detailed seaming looked bulky under the straight silhouette of the 60s, and women felt liberated by this soft cup bra. 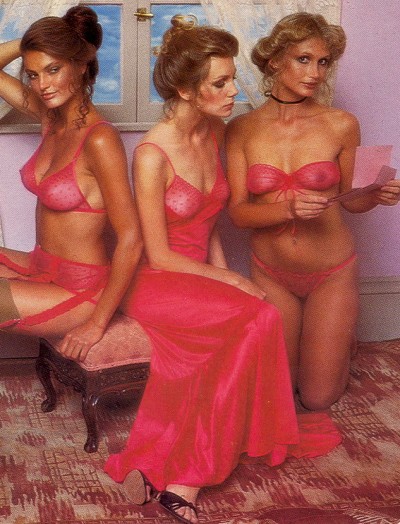 from a 1979 Victoria's Secret catalog, via Retrospace. I love this image because in their modern photoshoots, you would never see that breast shape on the right, much less a pair of visible nipples!

Into the 70s, more women started going braless and a more "teardrop" shape was in style.  Shows like "Charlie's Angels" helped coin the gross term "jiggle TV" because of their braless leading ladies. 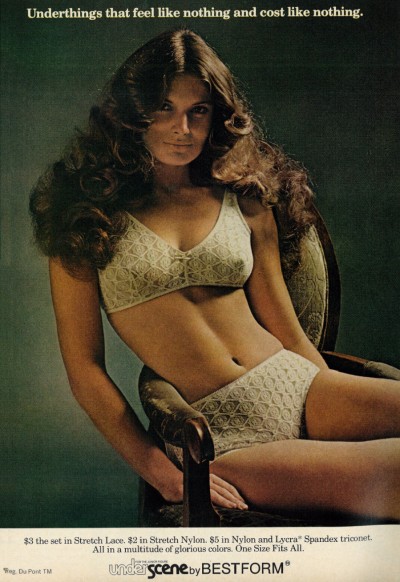 New developments in synthetic knits and other stretch fabrics made soft bras more popular for women who wanted a little more coverage. 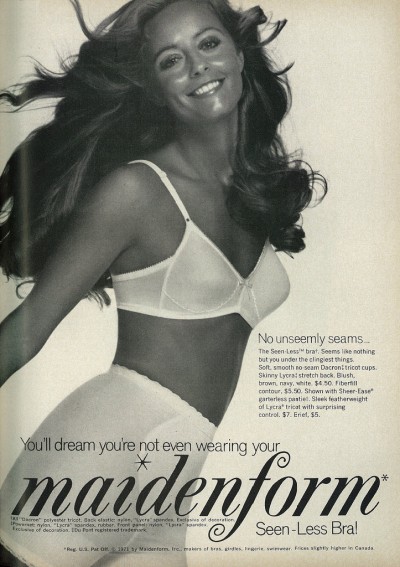 However, the shape of structured bras stayed similar to the shape of the 60s, with a bit less point. Seamless bras like this one were the first of what we call "t-shirt bras" today. 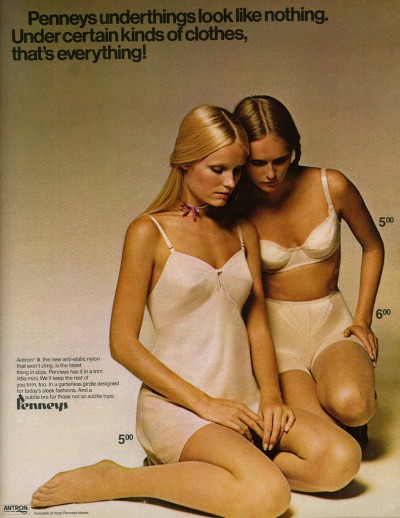 Thanks to the growing influence of feminism, a "natural look" was in style for cosmetics, and ensuring that no one could see your support garments may have stemmed from that ideal. 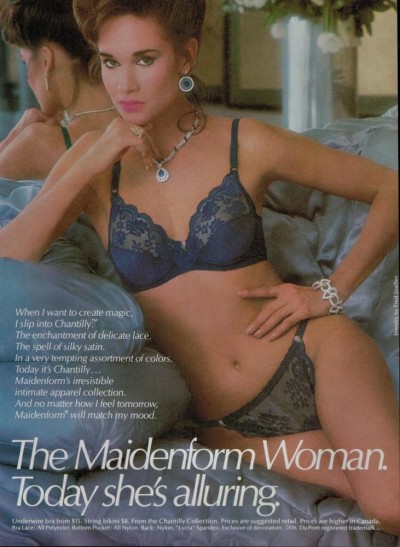 The American woman became more body-conscious as the fitness craze took hold in the 1980s. Underwires came back into style and created the beginning of today's globular shape: round and lifted. Breast implants existed in the US since the 60s, but weren't popular until now. 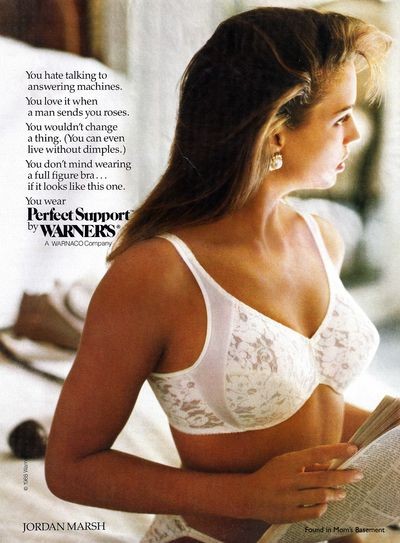 After the straight silhouettes of the 60s and 70s, fashion once again emphasized the breasts in the 80s. Fashion was quite top-heavy with broad shoulders, reflecting the American woman's desire for more power in society and business. 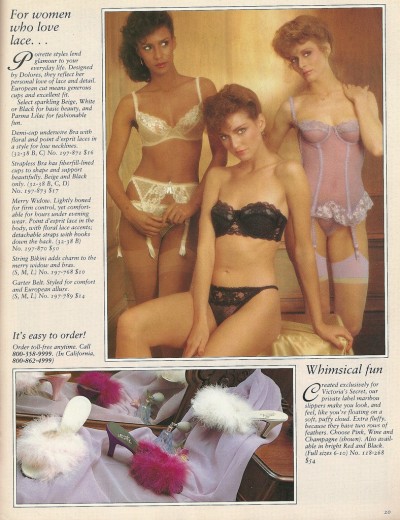 From a 1982 Victoria's Secret catalog, via Retrospace

Victoria's Secret was sold to L Brands, which began a massive mall-based expansion and brought lingerie into the mainstream in the US.

Minimalism was huge in 1990s fashion, and lingerie was no exception; the focus was more on the body than the lingerie. Bras still lifted and shaped, but going braless wasn't unheard of as a thin, straight silhouette, similar to the 1920s, was popular. 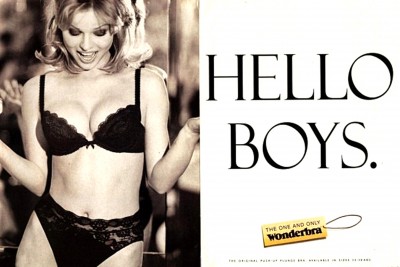 The iconic (and very heteronormative) Wonderbra advertisement from the 90s, via NY Post

However, many women wanted to add the appearance of additional cup sizes and cleavage, so bras pushed their breasts up and together. Even pixie-like Kate Moss loved the Wonderbra, which was relaunched in the US in the 90s and became an instant phenomenon. 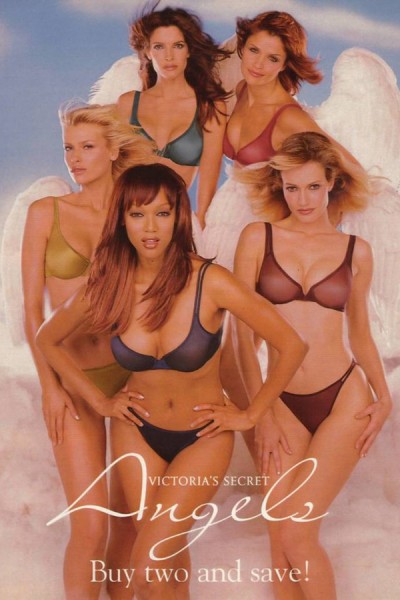 The Victoria's Secret's Angels "spokesmodels" brought huge sales to the brand during the 90s; they were a gamechanger when it came to American women embracing lingerie, and the globular shape, in the late 20th century. 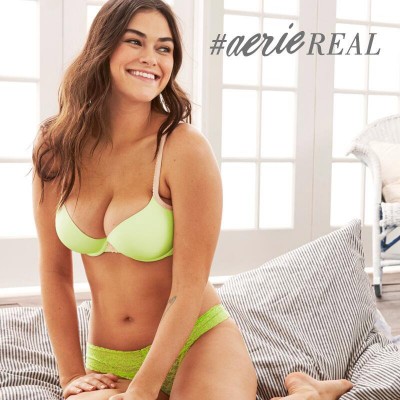 Today, the most important parts of the "perfect" breast shape in America are lift, smoothness, and roundness with emphasis on cleavage. 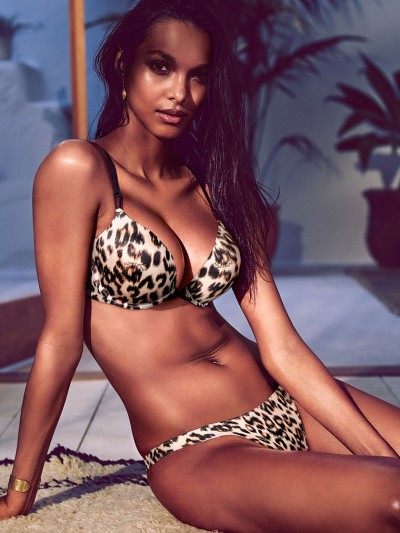 Foam injection creates round cups, and bands are super stretchy, thanks to technological developments in synthetic fabrics. 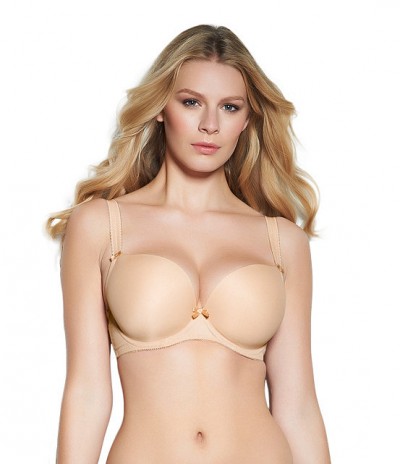 It almost seems like today's "perfect" shape couldn't get any more round; absolutely no 'pointiness' is given with modern contour bras. I'm not sure what is socially influencing this round, uplifted shape, or why visible nipples are so taboo today. 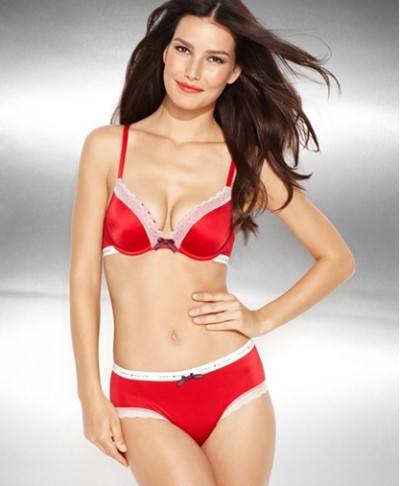 Gel inserts and thick shaped foam add volume, and small-busted women often complain about not being able to find bras without padding. Breast augmentation is now the most popular cosmetic surgery in the United States. 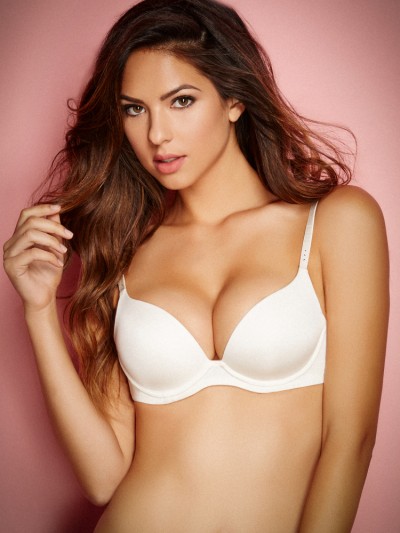 Frederick's of Hollywood MyFit Smooth Plunge bra, which "enhances your cup size by up to 200%."

Celebrities going braless in sheer gowns on the red carpet, along with movements like Free the Nipple, could be changing that, but as far as mainstream American society goes, nipples are still seen as taboo. I spoke with a couple of UK-based lingerie labels at the last Curvexpo NY tradeshow, and almost all of the bras they sold to US-based boutiques were molded t-shirt bras.

The interconnected modern world means different shapes and styles of bras are more accessible than ever in the US, but there is still such a small range of breast shapes that are seen as "normal" by mainstream America. It would probably be unprofessional for an American woman to show up to her corporate job wearing a stretchy bralette or a longline bullet bra under her blouse. "Proper" undergarments are determined by what we see as "normal," and this is the norm today in America.

So is this it? Are American women destined to shape their breasts into gravity-defying half-globes for the rest of eternity? Is this the perfect breast shape? Of course not. Aesthetics don't evolve with an end point in mind; they've changed continuously throughout history and will likely keep changing into the future. America's current idea of perfection isn't the pinnacle of breast shape or the height of perfection. The preference for the globular breast didn't evolve from decades of society trying out different silhouettes in pursuit of the best one; it's evolved over and over for the past 100 years, and will probably be a different preference entirely in the next century.

And that's totally okay! Part of the fun of lingerie and fashion in general is playing with shapes and proportions. But it's important to remember that it's just another shape, no better or worse than any previous shapes, and not the end-all-be-all of breast preferences. Too many women beat themselves up for having breasts that don't fit the "ideal," but the ideal is lifted and contoured to suit the modern age. In fifty years, it's entirely possible the current ideal will look absolutely ridiculous.When it comes to aesthetics, perfect is subjective.

Do you agree that in fifty years, the current ideal breast shape will look ridiculous to Americans? Or do you think the globular shape is here to stay? What aspects of our culture do you think influenced the shape?