The Myth of The Perfect Breast, Part 1: From Bandeaus to Bullet Bras 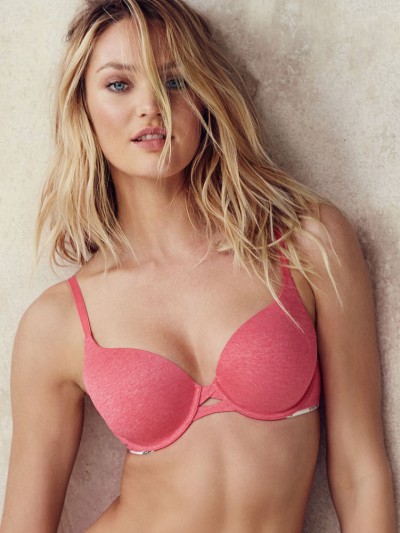 Vintage-inspired lingerie is all over the market right now, from 1950s-inspired lace and tassels to high-cut 80s-style bodysuits, but the most popular bras from mainstream manufacturers in the US disregard the silhouettes of the past and create just one shape: globular. Personal preference aside, American society tells us breasts should look a certain way.

A quick glance online through the lingerie section of a department store or clothing retailer's bra section online like Nordstrom or H&M gives you a good idea of the way we expect breasts to look in the US: they should be smooth, separated, perky half-spheres that ignore gravity and have no visible nipples, else people perceive them as looking vulgar, obvious or strange. It tends to matter less if a bra gives support and more if it gives the right shape. The t-shirt bra is probably the most common bra in America.

But this preference for the gravity-defying, no-nipple look hasn't always existed. Aesthetics and style constantly affect what different cultures see as the "perfect" breast shape, and in the US alone, the changing styles are staggering and fascinating. But even after the bra was invented and American women were no longer wearing corsets en masse, they kept shaping their breasts using new technologies to suit the look of the time --- and they still are.

So let's take a look back in American history and see how the "perfect" breast shape has evolved. The first part in this series takes us from the flat shape of the 1920s to the super-pointed shape of the 1950s. 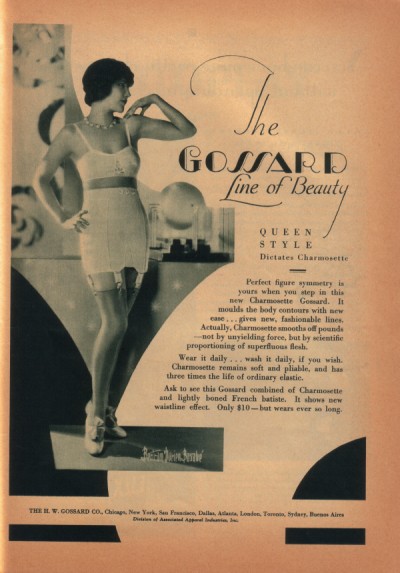 1929 Gossard advertisement via flickr. Look at those smooth, airbrushed curves!

In the 1920s, the ideal breast shape was smooth, subtle, and close to the body. Many women started wearing what are now called bralettes or bandeau bras that offered more compression than lift, while women with larger breasts bound them close to their bodies or wore long corsets that slimmed down their figures from bust to hip. 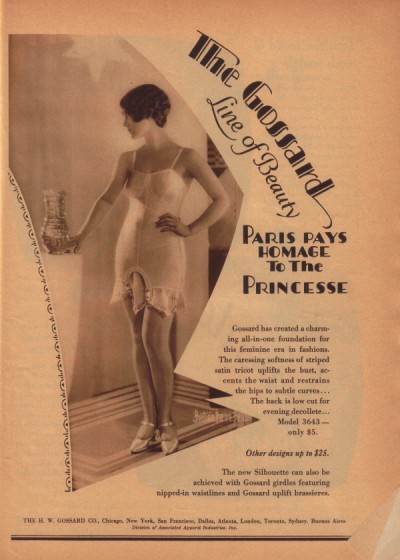 If a woman wore structured undergarments, her goal was smoothing and minimizing the breasts, creating one long line from the shoulders to the legs. 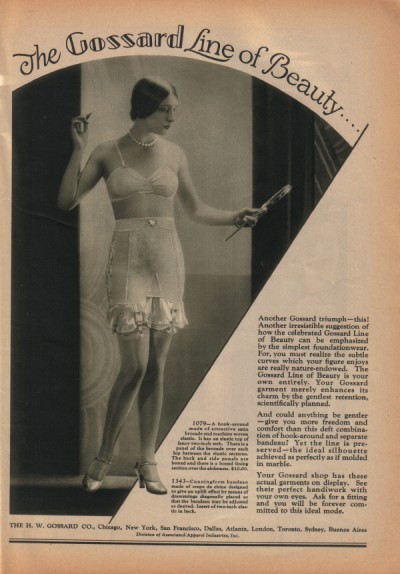 If she wasn't wearing a full girdle, the bra she was wearing wasn't the supportive type American women prefer today. 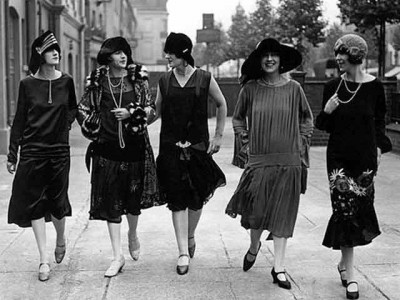 In fact, they might merely be wearing camisoles under those dresses! Via Collectors Weekly

If you look at photos of fully-clothed women in the 1920s, you can see that their undergarments purposefully don't provide much support. The bust line was low and, compared to our modern preferences, it seems like breasts were merely incidental to the overall straight silhouette. 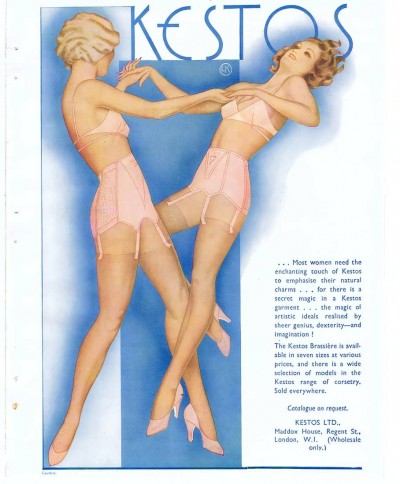 In the 1930s, a slightly more voluptuous silhouette became popular. The Kestos bra was introduced, which was the first ready-to-wear bra with two-part cups. 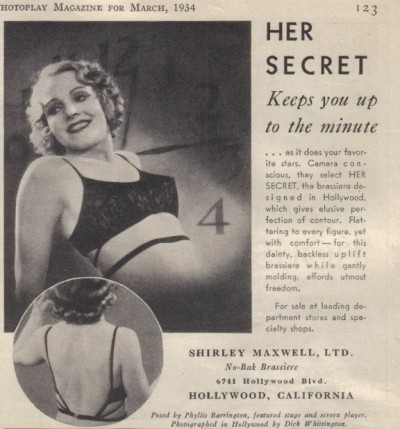 1934 Shirley Maxwell advertisement for a Kestos knockoff via flickr.

The Kestos and its imitators had darts that allowed for extra fullness, so breasts projected from the body as opposed to being compressed. Lift and curve was more important but projection was still pretty subtle. This created a smooth line from top to bottom, letting the popular bias cut dresses of the time flow evenly over the body without any overt protrusions beneath.

1935 Maidenform ad via flickr. The stitched "petal" panels on the underside of the cups give extra support.

Lettered cup sizes were introduced in the mid-1930s, and you can see the shape becoming more pointed and lifted as technology evolved.

World War II brought military style and immense patriotism to America, influencing the pointy breast shape of the 1940s. American women were also working in factories and on the farm while the men were away at war, so they needed more support than previous generations. This shape combined with the knit tops popular at the time brought about the idea of the "sweater girl," which is exactly what it sounds like: an archetype of a girl who wore a sweater over a pointy bra.

This advertisement proclaims the Life-Bra "lifts, molds, corrects and holds"; an advertisement saying the same thing today would have a completely different shape. 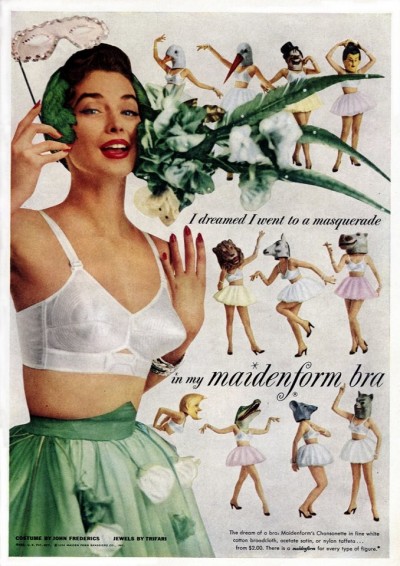 In the 50s, that pointed shape became the iconic bullet shape, created with tiny concentric stitch circles. American women wanted the glamour and extravagance they went without during the war, and this dramatic, uplifted, pointed shape reflected that.

1953 Exquisite Form advertisement for "the most popular bra in America," via flickr.

Many people today look at this shape and think about how silly it was to try to make breasts look like, well, torpedoes, but the modern bra cup isn't any different --- both styles mold the breasts to fit a certain shape. 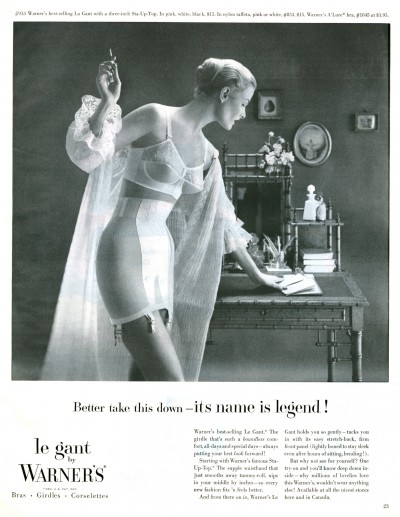 The hourglass figure was more extreme than ever, with breasts being lifted, pushed forward, and pointing out, shaped with rows and rows of stitches.

People often talk about how much shapelier women were 60 years ago, but it's really not the proportions that were different; it's that they wore bras that gave them a different shape. Holly wrote a great piece about wearing vintage bras, and how her body and breasts appear completely different when wearing undergarments and dresses of the same time period.

Out of all the styles represented here, I see the 1950s-preferred breast shape as being the closest to the preferred shape of modern America, at least idealogically. Even though the two look completely different, both the ultra-pointed 50s bras and the ultra-round modern bras require breasts to be rather dramatically sculpted and molded into those shapes. A lot of people giggle at the bullet bra, but I think in 50 years there's a good possibility many Americans will look back at today's "perfect" breast shape and giggle for the same reasons.

Are you surprised by any of these historical ideas of "perfection"? Do you agree that today's shape is just as unnatural as the bullet bras of the 1950s?