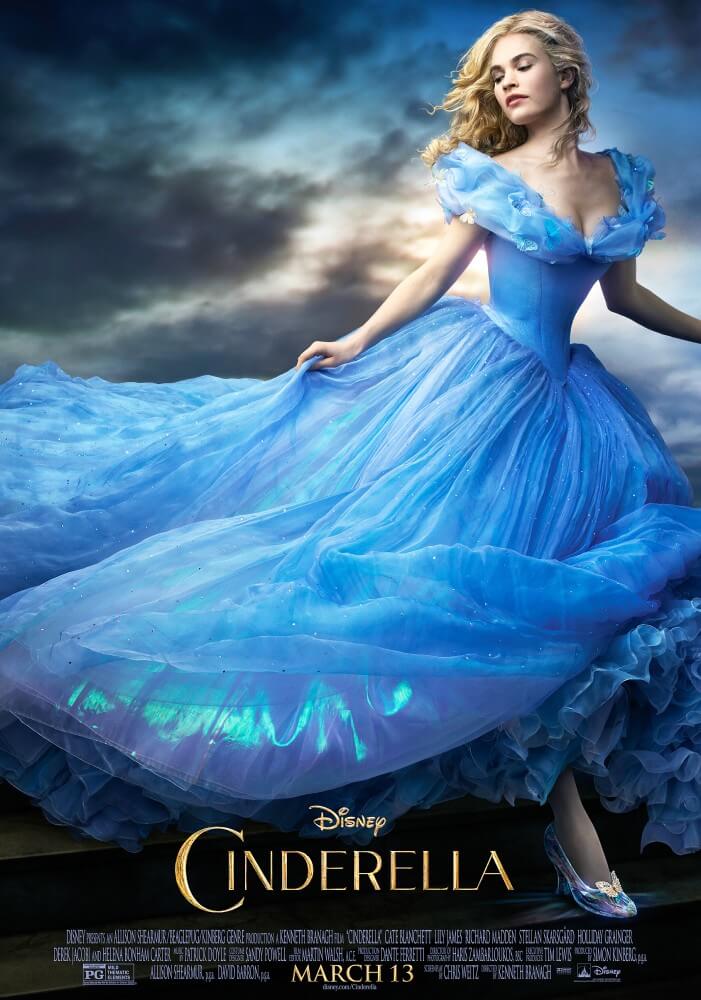 Lily James stars in Disney's upcoming live-action Cinderella film. It comes out next week but her waist has been making waves for months already.

It has been brought to my attention that the internet is still flipping out over Lily James' waist in the trailers and promotional imagery of Disney's upcoming Cinderella film. First there was the debate over whether her waist has been edited in post-production to be so tiny. Now, the camp that thinks said waist is causing body dysmorphia is latching onto the revelation that wearing a corset changes the way you eat: Lily James went on a "partially liquid diet" while wearing the corset. (Um, isn't that also technically a "partially solid diet?") 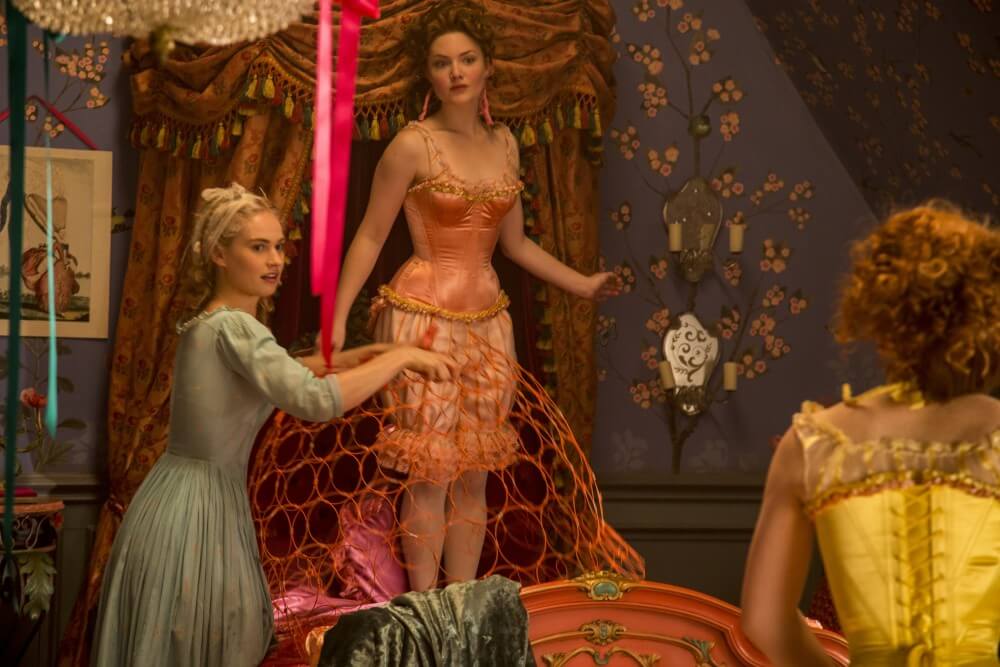 A stepsister in her undergarments: a corset and unusual crinoline.

I take issue with this on a lot of levels. First, why do we really care that much about what (female) celebrities eat? That, to me, speaks far more to the body image issues that plague this country's women than the use of shapewear and/or Photoshop. I still don't understand why a corset is supposedly more misleading and damaging than, say, eyeliner, or high heels, or even Spanx.

“If you're going to expend energy being mad about Photoshop, you'll also have to be mad about earrings. No one's ears are that sparkly!” 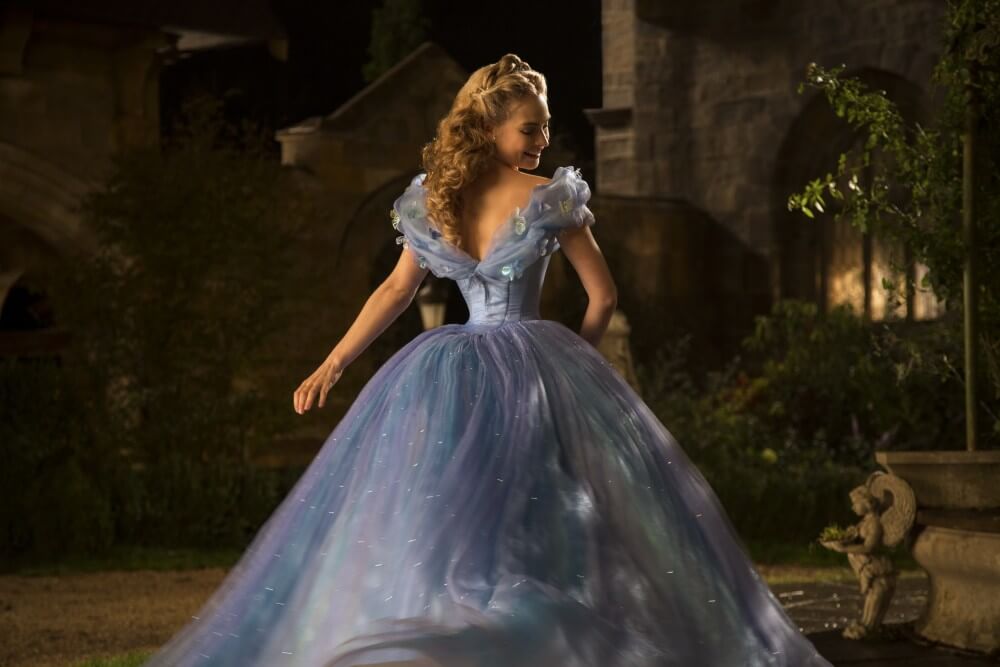 Now, just how "unreal" is the waist in question? It's really hard to edit an actual human in footage rather than a still image, so it's unlikely that any of the trailers featured a CGI waistline. On the other hand, realistically, the results of any photoshoot for a major motion picture would be cleaned up to some degree in post-production. But let's stop pretending that photos are magical truth mirrors, please, and that every other actress's arms, waist, face and/or boobs aren't touched up for every single movie poster ever since the dawn of movies. 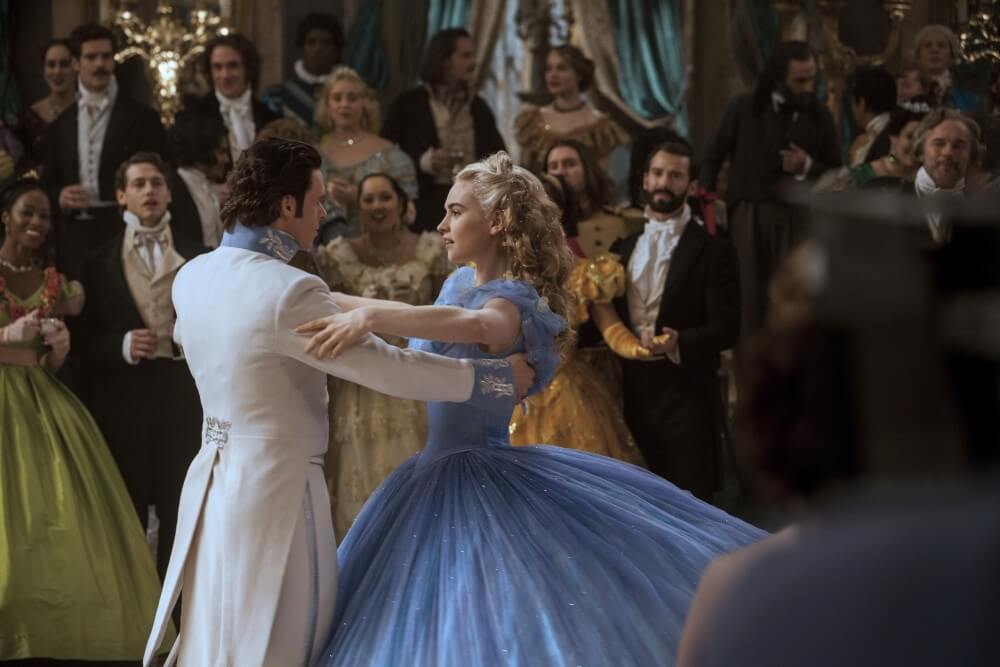 A side view of Lily James in her Cinderella ballgown. Notice how her waist is about the same width from this perspective as from the front - it's been sculpted to a circular, rather than oval, shape to further the illusion of tinyness when viewed from the front.

As others, like Catherine Clavering of Kiss Me Deadly, have pointed out, part of the apparent smallness of the waist is an optical illusion created by the fullness of the skirts and neckline/shoulder poofs. Check out this post on Dispelling the Myth of the Itsy Bitsy Teeny Tiny Waist and scroll down to see another blue dress with a similar silhouette from the Met Museum.

Some corsets are also cut so that some of the circumference of the torso is merely redistributed front and back, rather than reduced, which makes front and back views look much more extreme. The size of the skirt and the structure of the corset also have a symbiotic relationship. Historically, a woman's bodice or corset helped distribute the weight of heavy skirts. 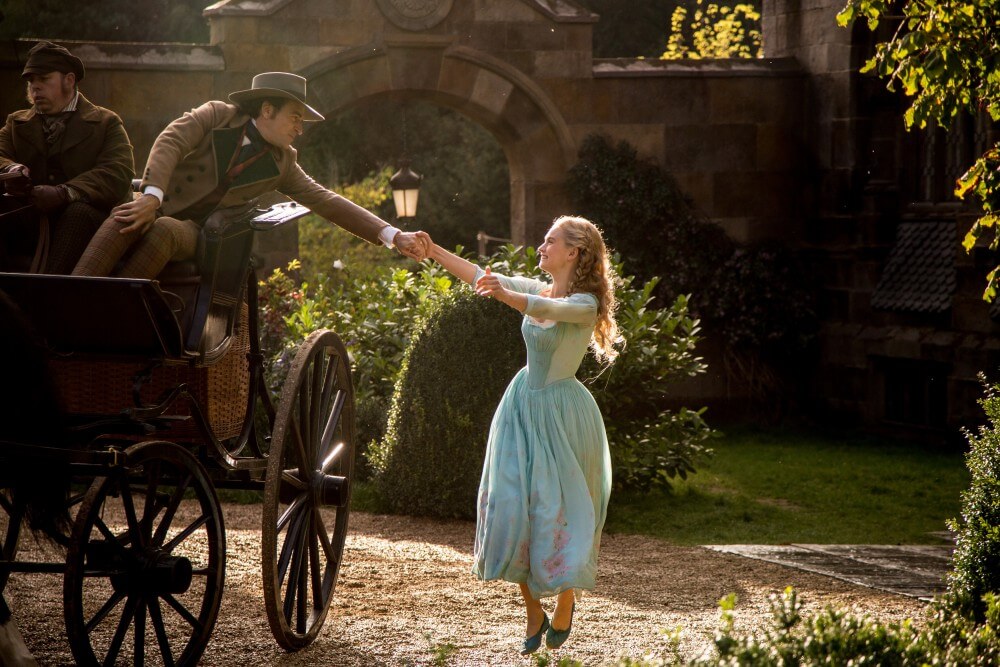 Lily James in a simpler day costume for Cinderella.

Now, note the different tone taken by these two interviews with Lily James. She states that she is naturally small waisted and was substantially corseted for the film, but the LA Times interview emphasizes her well-being and appreciation for the costume whereas her E! interview is a bit self-effacing and admittedly overdramatic.

“I think it’s all very hypocritical, and they contradict themselves, and they’re drawing more attention to it. I think all that stuff’s so negative, and you’ve got to let it wash over your head,” she said, struggling to find her words. “I’m so healthy. I’ve got hips and boobs and a bum and a small waist.” 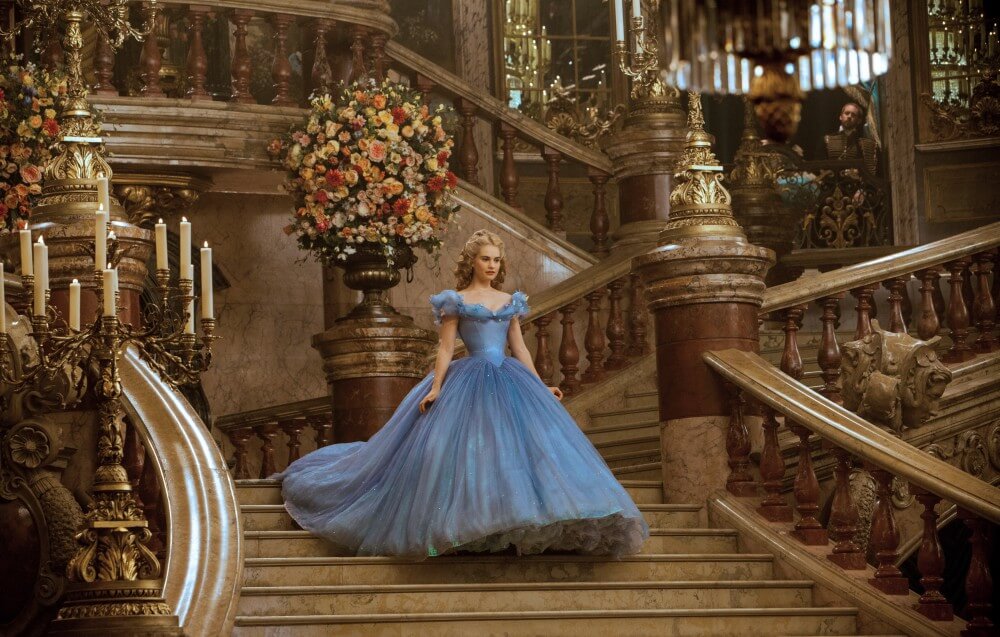 As for her so-called "liquid diet," I find the way it's being discussed to be a bit misleading. It's not as if Lily James went on a juice fast (an action our culture would normally find praise-worthy) to fit into the corset and never ate solid food. Exclusively for the time when she was corseted, she found soup easier to digest, and her director made sure there was always some at the ready for her. Everyone reacts differently to eating in a corset, but eating smaller/more frequent meals (another action which is generally thought of as good health practice) and different kinds of food is totally normal.

The vast majority of women (and men) wearing corsets today are doing it for their own pleasure and can elect to loosen their laces somewhat during or after eating in order to accommodate the digestive process if necessary.

Since Ms. James was on a film set, her corset had to be consistently laced to the same level in order to maintain the fit of the dress, and she didn't have as much control over when she put her corset on and took it off.

Historically, women would (of course) wear tighter corsets for special occasions like a ball, just as modern women might wear their highest heels for a special event. The difference here is that not only were those women accustomed to daily corseting, but they only had to do it for one night, not however many days it takes to get the requisite takes for a huge motion picture. Actors and actresses have surely endured much crazier things than soup for the sake of film.

“I was constantly saying ‘You are eating, aren’t you, Lily? Let’s get Lily some soup please!'” 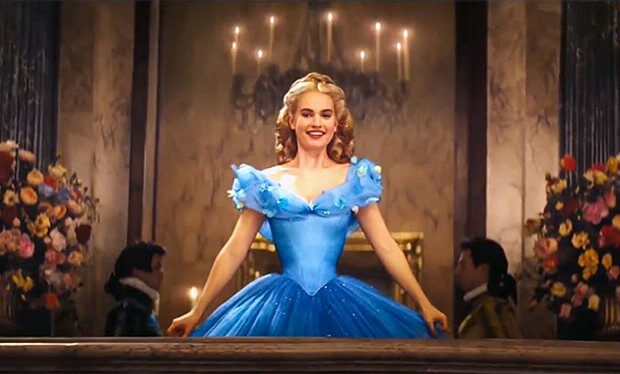 At the end of the day, I just wish we would stop treating corseting as if it were some form of madness. While those who are campaigning against tiny waists may think they're doing it "for the children!" it's nothing more than another kind of body snark. Don't tell me Lily James' waist is why you need feminism; this unrelenting judgment of what women wear and eat is why I need feminism.