In Defense of Photoshop | The Lingerie Addict

In Defense of Photoshop

By Marianne Faulkner May 22, 2013 in body image 20 comments
Share this article 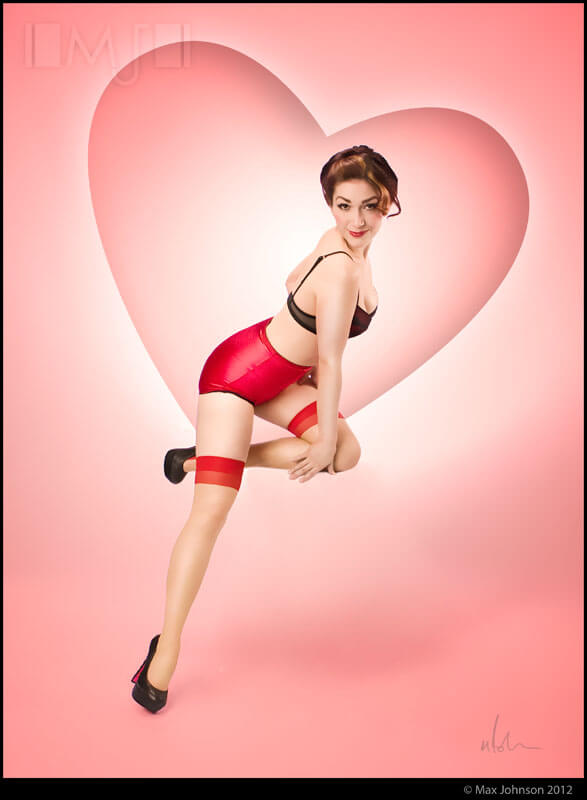 I know, you must think I'm very defensive this month, what with In Defense of Ready-to-Wear Corsets two weeks ago, and now this. Thing is, this idea has been germinating for some time, this defense of Photoshop. Poor Photoshop, you're so villainized and misunderstood. You're just a tool, and yes, in the wrong hands, you do some absurd and terrible things. But you also do beautiful things that only enhance our ability to appreciate an image. Every now and then some Photoshop mishap will be unleashed upon the world and held up as the symbol of our social pressures, as the catalyst for eating disorders across the country, and the cry will go out to ban Photoshop from our media imagery. But is it even possible? Or necessary?

I think a lot of the outcry against Photoshop is based on a widespread confusion about how Photoshop is most often used, and the context and evolution of its usage. 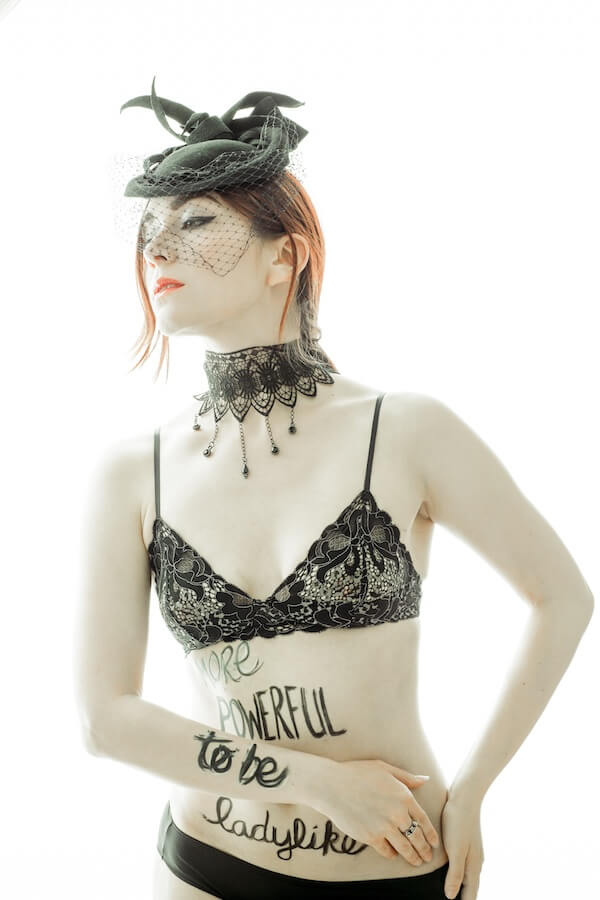 Joel Aron's proofs may look better than most of finished images that I see, but that doesn't stop him from perfecting each photo with post-processing. Model: Victoria Dagger; art director: Morgan Marcani.

As a writer here for The Lingerie Addict, I probably don't have to tell you that I do not in any way condone body snark. A person's body is nobody's business but their own. The years of having people make snippy remarks like, "Halloween was last month," in response to my eclectic outfits are, realistically, at least somewhat responsible for the cool confidence for what some people refer to as my effortless style (to my bafflement). Thing is, when a photograph is doctored, it's not necessarily an implicit judgment of the model therein, or the populace that looks upon it. Photos are retouched for a lot of reasons, and it's important to remember that a photograph isn't necessarily a portrait, especially if you're seeing it in a magazine.

Before and after retouching example by Joel Aron. Well-executed retouching looks natural and draws the viewer to the intended focus of the image. Model: Lauren, for Dark Garden Unique Corsetry.

There's this assumption that a camera is some sort of magical truth recorder, but that's really not the case. Camera lenses do not record information with the same perception that our eyes and brains do. Let's start with the mechanics: our eyes only focus on a small portion of what we see, and the rest becomes a soft haze. Some of this can be replicated with "depth of field" in a camera, but more often a whole image is sharp, especially in product or catalog photography when detail is required to explain a product. Just last week, the best head drawing professor I've worked with told his class that drawing from life is superior because the camera distorts an image --- understandable, when we take a three-dimensional object and try to condense it into two, the presumed source of the old "the camera adds ten pounds" adage. In particular, the camera will capture objects closest to it as being larger than life, often disproportionately so. Meanwhile, our brains are looking at people through their own haze, one that is probably generally good-natured. We don't look at our friends and notice their pores, zits, stray hairs, mini-muffins from tight clothing, wrinkles, stretch marks, and minute scars in stark detail. Our brain sees a living, breathing, moving impression of the person, through the filter of our emotions toward them and mood at the time. Our brain naturally straightens things that are at an angle, improves symmetry, standardizes foreshortening and proportion, and so on. 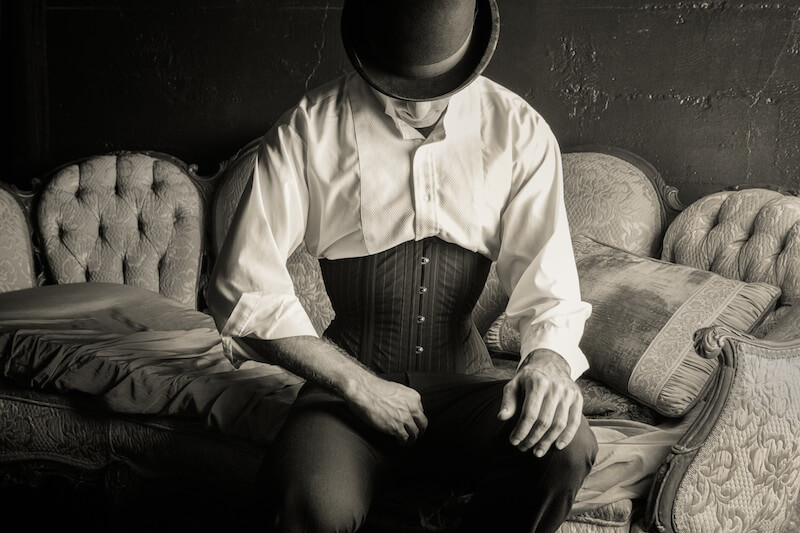 A camera lens doesn't record things as our eye sees them: notice how the model's left hand is significantly larger than the right because it is closer to the camera. Photo by Joel Aron for Dark Garden Unique Corsetry.

In a photograph, with all those small details brought out crystal clear, the resulting image (so different from life) is a series of distractions from whatever the subject of the photograph is intended to be. Even if the intended subject was a portrait, an unretouched image can be like hearing your voice on your answering machine for the first time. "Is that what I really sound like?" you think. "Is my voice that grating?" 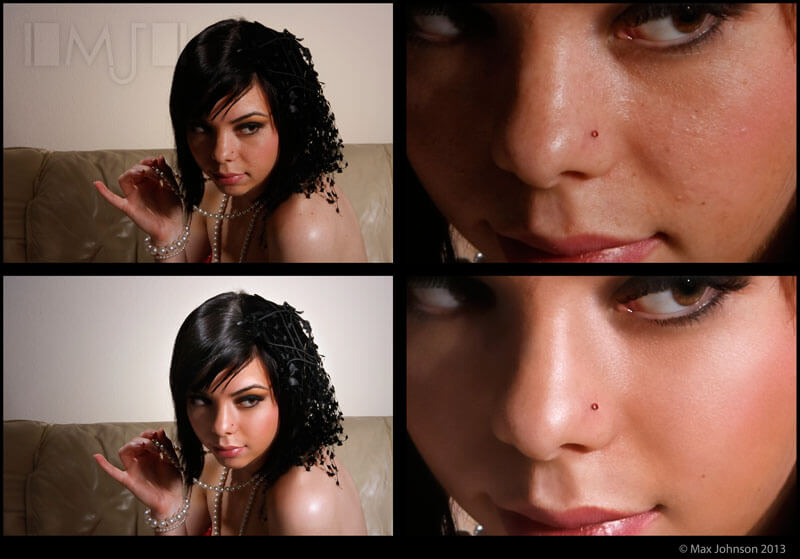 Retouching example by Max Johnson. Which version of the image do you think is a better reflection of how you would observe this model's skin in life?

Aside from focus, a camera also records color differently. Unretouched images often have a slightly muddy look to them; Photoshop (or its equivalent) will almost always be necessary in any image to fine-tune contrast and color balance. For that reason alone, we could never truly ban Photoshop, to say nothing of simple niceties like cropping an image. 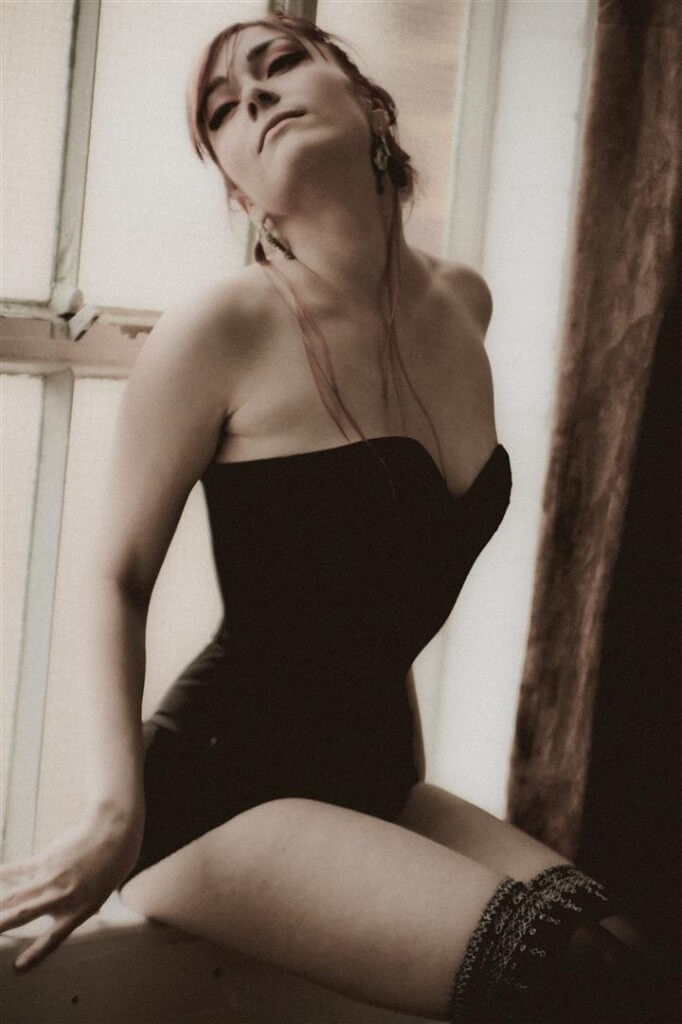 Model: Victoria Dagger; Photo: Karolina Marek. Photoshop was clearly used in this image to adjust the color palette and contrast.

Some of our mistrust of Photoshop comes from a good old-fashioned fear of the Other. The fashion industry as a whole, or its various facets, gets lumped into this giant, hateful, misogynistic, Devil-Wears-Prada mass when people go on these rants and tirades. But ultimately, the fashion industry is made of individual people, and all the designers I've known are more interested in designing beautiful things than repressing the models who are to be their living clothes hangers. We don't run around like Mugatu from Zoolander, asking if our dressmaker pins got in the way of your ass. By that same token, photographers are also real people, and artists. As I mentioned before, most photography isn't portraiture, and I believe a photographer has a right to exercise some artistic license. 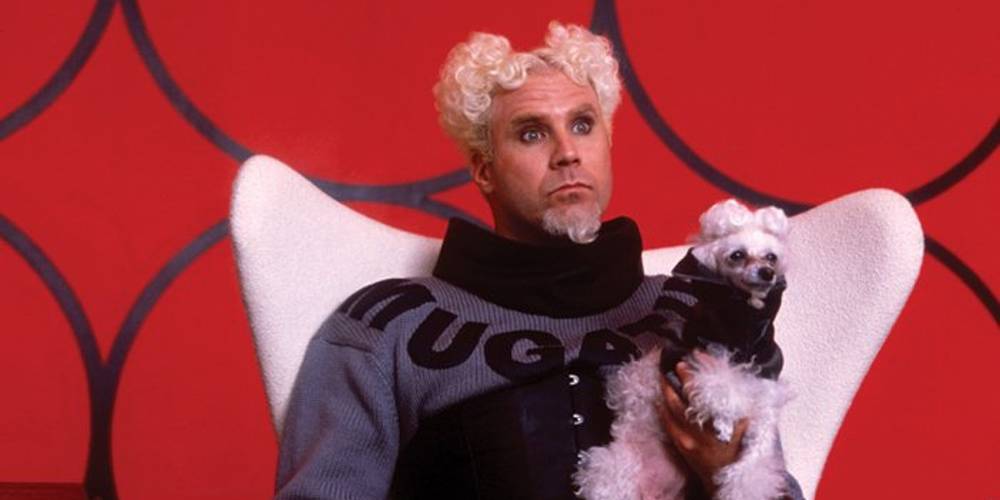 Believe it or not, not everyone in the fashion industry is like Mugatu from Zoolander! A lot of us just want to practice our craft. We're in it for the art, not the oppression.

At this point, it bears mentioning that while Photoshop has only existed since 1989, humans have been doctoring images for as long as we've been making them. Retouching goes back about as long as we've had photography (remember that some of the most prominent pinup artists got their start as airbrushers), and before that, painters would use their discretion in capturing a subject in their best light. "You're the designer," my figure drawing professors would say as I worked towards my MFA. Sometimes, life taken literally just doesn't translate well to the page. 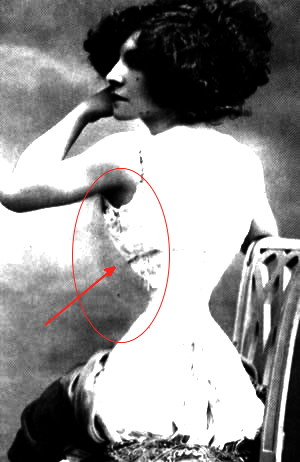 Retouched image of famous tightlacer Polaire. Source with additional before & after images: http://www.contourcorsets.com/corset_writings.html.

I saw a TED talk not long ago, the speaker of which is an underwear model. You can view the whole thing here: Cameron Russell: Looks aren't everything. Believe me, I'm a model. What I found more telling, though, was this summary of the talk: Model Cameron Russell gives the real story behind six of her stunning photos. The real story?  Hardly. Looking at Ms. Russell speaking, which set of images do you think more closely resembles? The editorial images, or snapshots from the same time period? I do think the talk was interesting and she makes some very good points, but most of what the comparison between images showed me was: 1) Wow, point-and-shoot cameras in the hands of an amateur sure take bad photos, and 2) It's really weird that we doll up young teens to look like they are in their 20s. More relevant to my point is when Ms. Russell says that when we see an image, what we really see is a composite, a team's hard work. Is it more immoral to have professional stylists doing your hair, makeup, and wardrobe than to do it yourself? Is it unethical to light an image to show a model to her best advantage? I don't think so, personally. Anyway, Photoshop is only a small part of the equation of what crafts the photos we see in magazines. 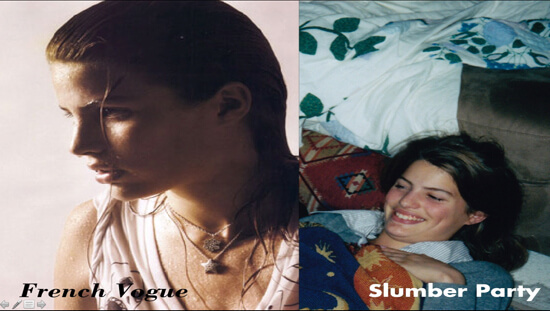 As a disclaimer, much of what I said applies primarily to advertising and editorial images. When the subject is a celebrity, truly a subject and not simply a model, it gets more complicated. Celebrities must exist in a cycle of exceptionalism for the same reason books aren't written about the commonplace. We are intrigued by their unique qualities, and they're under pressure to remain extraordinary, to the point that their images are processed to the edge of recognition, "refined" to an editor's ideal of unreal beauty.

With all of that said (I know, it was a lot), I do absolutely believe that Photoshop can be taken too far, used to create images that are entirely unrealistic and/or unhealthy looking. Negligent retouchers drastically overcorrect minor blemishes, camera distortions, or nothing at all. Things that bring me particular concern are the transformation of healthy women into anatomically impossible figures (of course), the sexualization of underage girls, and the whitewashing of women of color.

What do you find troubling about the way we use Photoshop? Has this piece made you reconsider its place in our world? How do you think we can enact social change through our media images, or educate people about the unreality of photos? Please share your thoughts in the comments below.