In Memory of Velda Lauder: A Video of One of Her Last Corset Collections 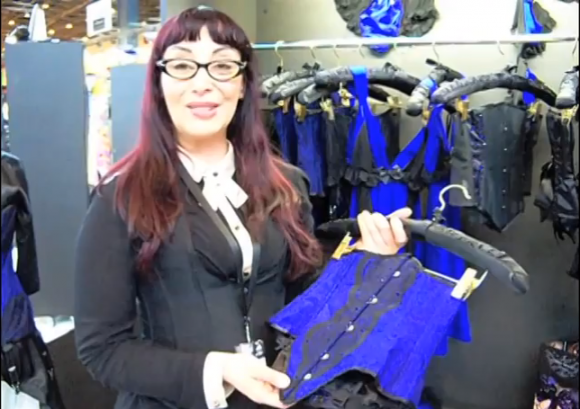 With the events of the Oxford Conference of Corsetry this past weekend, I've had corsets on my mind a little more than usual. And I have a hard time thinking about corsets without also thinking of Velda Lauder.

For those who are unfamiliar with her name, Velda was a Master Corsetiere who passed away suddenly in March 2013. She was at the peak of her professional career, and her corsets were world-renowned for their quality and artistic design. Velda was a true artisan. Her corsets were heirloom pieces meant to be treasured for decades.

While searching my laptop for something else a few weeks back, I rediscovered this short five-minute film I made of Velda at the Salon International de la Lingerie in Paris in January 2012. I was slow about publishing it (I hadn't yet figured out how to handle this video thing), and then when Velda died suddenly, I felt awkward about publishing it. Yet I didn't want to delete the video, so I just put it away.

I decided to share this short clip now because there are so many people who will never meet Velda or experience her work or get to try one of her corsets for themselves. When I saw this video, I was reminded, in a way that just can't be conveyed with simple photographs, of  how extraordinary Velda's collections were and how knowledgeable and insightful a person she was.

My intention here isn't to offend those who knew her well or to take advantage of her death. Rather, in the wake of the renewed surge of interest corsetry is experiencing, I wanted people to take a moment to view Velda's work and appreciate her legacy. A side effect of fast fashion -- of cheap fashion -- is that it's harder for people to recognize quality, and corsetry is no different. In world of $50 off the rack corsets, many new corsetting enthusiasts wonder why they should spend on anything else (and some vocal corset wearers even take the stance that custom work is a "waste of money"). But corsetry can be a form of art... as much as photography or music or film. There's a story in custom corsets, a story that doesn't exist in mass-produced fashion.

At the heart of all this, I just don't want people to forget Velda. I want people to not only know who she was, but also to be able to recognize her work. I want new corset wearers and corset makers to get a taste, a small sample, of just what she had achieved and to understand, just a little, the absence she's left in the corsetry world.

I hope you enjoy the video. And I apologize in advance for the fact that my camera work doesn't do justice to her designs.