Discovering Myself: The Transcendent Queerness of Genderfluid Lingerie

Today's guest post is from Neptune Violet, who describes themselves as follows: "Professionally, I'm a journalist and freelance cultural creative. Often, personally, as Mrz. Neptune Violet, I bend gender and cultural expectations like a bag of soft pretzels. Moreover, as Nep, I'm a sociopolitically aware, and sex-positive, binary-shatterer. In final, my deepest-seated goal of late -- in any form -- is to become 'America's Next Thot Model.'" 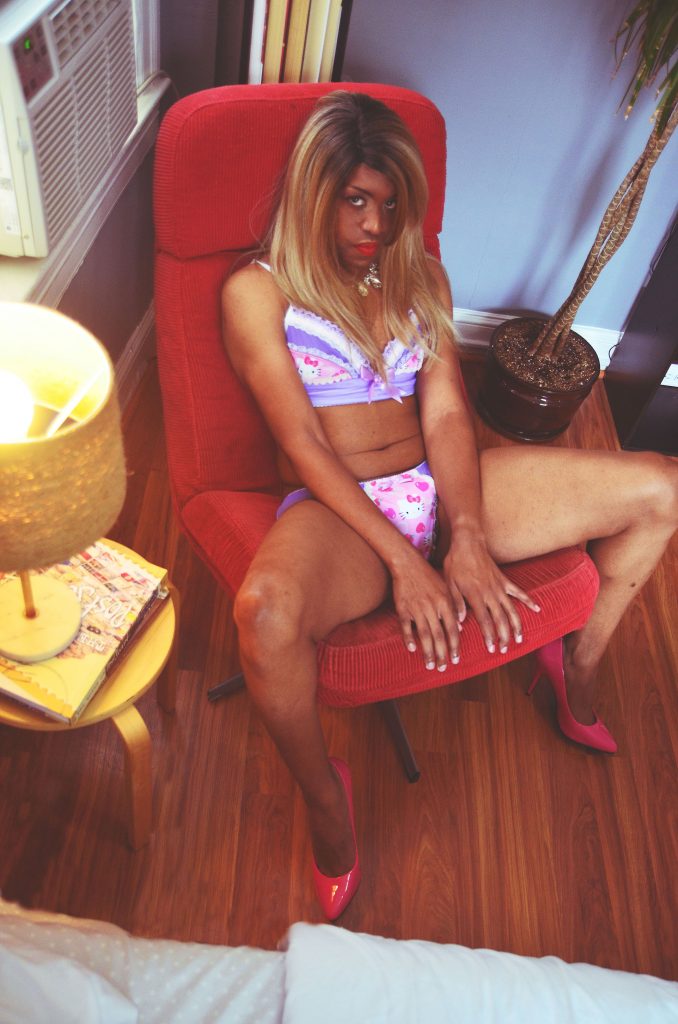 The author photographed by Freshie Juice. Set by Purrfect Pineapples.

If looking for the best answer about normalizing and mainstreaming gender and identity in America and otherwise, don’t ask a scientist. Instead, ask a seamstress. Luxury lingerie - via longer gussets, broader underbusts, and a greater appeal than ever - is emerging as a tool for male-presenting bodies exploring self-awareness without being bound by gender.

For me, this is a joyous development on a personal level. But, impressively enough, scientific data shows I’m likely not alone in my excitement.

Between 2017 and 2018, the numbers of American teenagers in polls identifying as either transgender or rejecting 'boy' or 'girl' gender identities showed a growth of 300%. Even further, for adults, mainstream television programs like FX’s Golden Globe and Primetime Emmy award-winning Pose highlight the history of and normalize the culture surrounding proud queer identity. This exposure has created a trickle-down effect where male-presenting bodies exploring gender-fluid identity are more readily appearing in traditionally femme-identified realms.

Within the past three years, I’ve come to better grips with the fact that for me, for 30 years, gender hasn’t had an assignment. Instead, it’s been a mess. Life is hard. I grew up without a father and surrounded by strong female role models. Plus, when you suffer from crippling social anxiety as a teenager to the point where you never think you’re going to get the girl, you start to feel it might just be easier to be the girl instead. 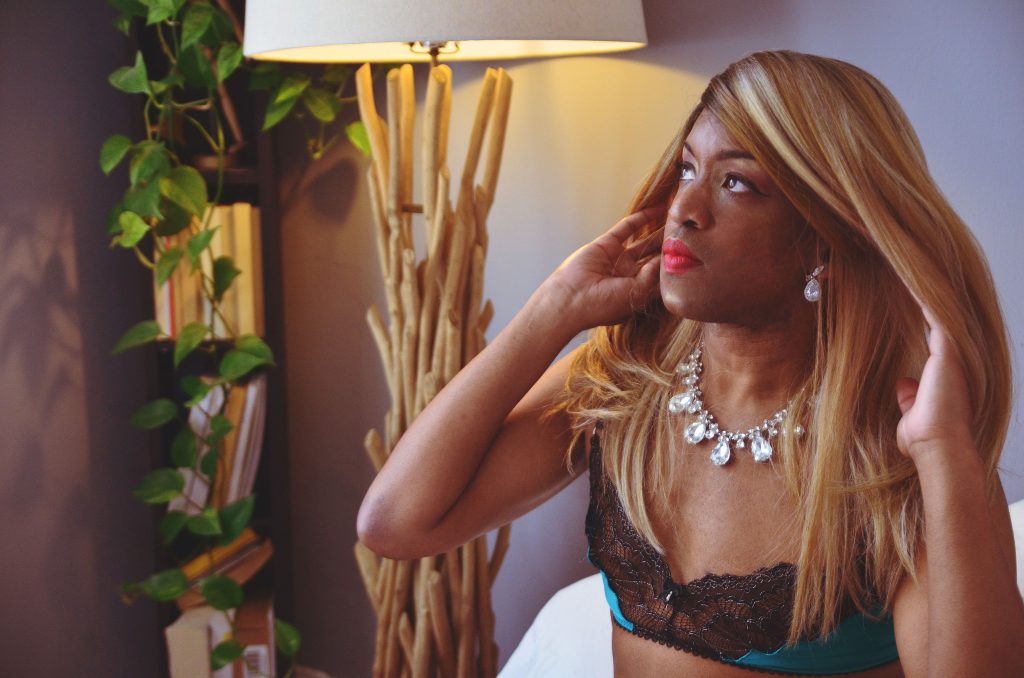 The author photographed by Freshie Juice. Set by Homme Mystere.

Three decades have existed where I’ve been split between knowing that James Brown said "it’s a man’s world,” loving that Amber Rose once said that she’s a “cool fun girl,” plus wanting to embody the line that Jill Sobule sings in “Supermodel” about being “young, hip, and beautiful.” Finally, luxury lingerie, to quote yet another song, has me “feeling myself.”

My emergence and journey within this world have been aided by online-based, custom-made, cut-and-sew luxury lingerie manufacturers serving more male-presenting, femme-curious, and binary breaking genderqueer customers. While costly - these pieces tend to range in the area of $80-$250 for a bra and panty set (more if garters belts are involved) - my self-defined beauty is now fully realized in my self-defined world where gender is a suggestion and freedom is demanded.

I started this journey as a young man in the era before the internet was a well-defined retail space. I dabbled in wearing “off-the-rack,” cis femme-intended, department store lingerie. Ghastly, ill-fitting results ultimately caused me more grief in my self-awareness than reassurance in my life choices.

As a result, I currently prefer lingerie that allows my stereotypical male body to absorb much more of the garment’s metaphorical feminine essence. A precise, close fit with cuts that rise high at the hip and tight at the chest, yet are still mindful of my masculinity is perfect. Whether that’s via silk that’s cool to the skin, lace that seduces the eye, or bows and ribbons that add a whimsical touch, they’re all so idealized in the pantheon of the feminine ideal that they warm my soul to the core.

Yes, I’m aware that companies like Australian brands Homme Mystere and Spangla, as well as current global power XDress, have existed since my early days dabbling into gender fluidity as a curious teenager in the 1990s. Their work is essential here.

Compared to custom-made fashions, they’re certainly less expensive. However, there’s no level of decline in craftwork, either. There’s a level of seasoned development apparent. Spangla’s founder Nicola-Jane Hirst notes, “30 years ago I was designing my Ace of Hearts women’s lingerie, and now (as times have changed) I changed those patterns to fit the male body. I am currently swamped trying to keep up!”

Spangla’s extensive offerings of bras and panties for male-presenting bodies are a staple of my wardrobe. Their silky bra and panties with black lace appliques cost $75 before shipping and handling. XDress offers a similar scope and a limited range of options, for $15 cheaper. As well, Homme Mystere has a more curated set of limited offerings in the neighborhood of $50 (with shipping) per set. Notably, I wear Homme Mystere often. Ultimately, I’m grateful to all three brands for inaugurating my gender journey. 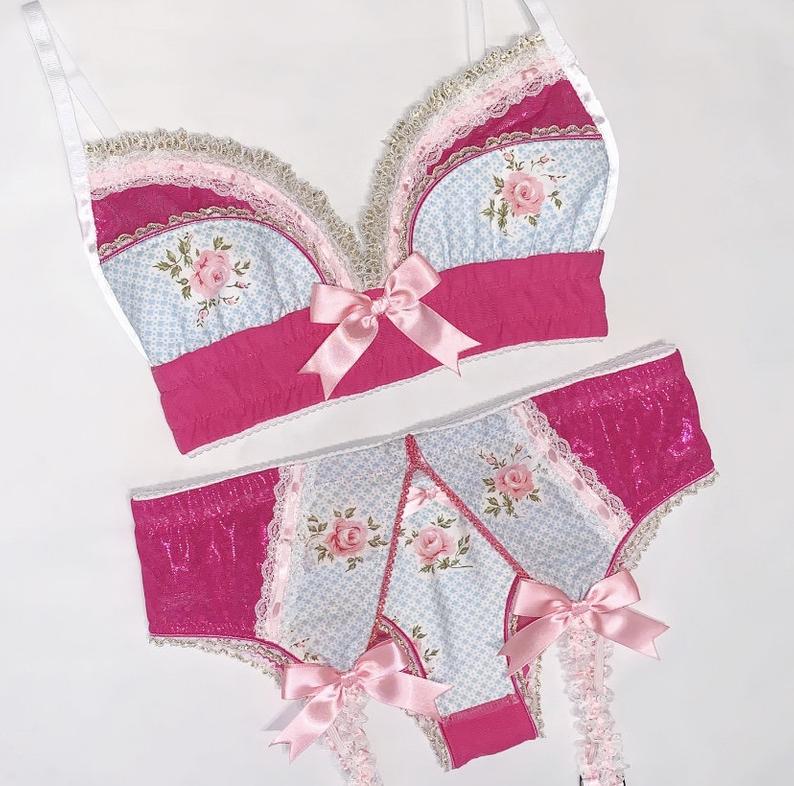 However, there’s something uniquely gratifying and self-awareness raising about navigating your way through the difficulties of actualizing self-identity while wearing a hand-crafted, custom-made bra and panty set. The empowerment derived from the silk ribbons, lace appliques, and smooth cotton of Chicago’s retro-inspired Purrfect Pineapples, or the gaudy, timeless, silken opulence of Nashville’s Dottie’s Delights brings tears to my eyes.

For the past 15 years, Erika Shuhendler’s Purrfect Pineapples has excelled in the custom, cut-and-sew lingerie space. “I'm always open to making custom items," she says. "I have been asked a lot more in the last few months to create pieces for [gender non-conforming] customers.”

The custom design options offered by the likes of Erika Shuhendler, as well as Dottie’s Delights’ Stephanie Kuhr, are created with a few essential goals in mind.

Kuhr notes that a broader and longer gusset and flatter-cut hip are essential aids in allowing for a looser, more comfortable undergarment fit. As well, in regards to creating a less restrictive bralette - one that fits more like a traditional men’s undershirt and less like a woman’s bra - a wider-set placement for the bra straps (that compensates for broader shoulder-width) plus a smaller bust-to-band ratio (to compensate for more full chests) are ideal.

Furthermore, Shuhendler adds, that when ordering, measuring one’s hips at the “bum’s fullest point” is an essential reminder for panties. As well, the best point at which to measure for an “underbust” measurement on a cis-born male customer is around their ribcage. As an additional reminder, she recommends sizing bras up a cup size because their width will allow the finished product to look more proportionate. 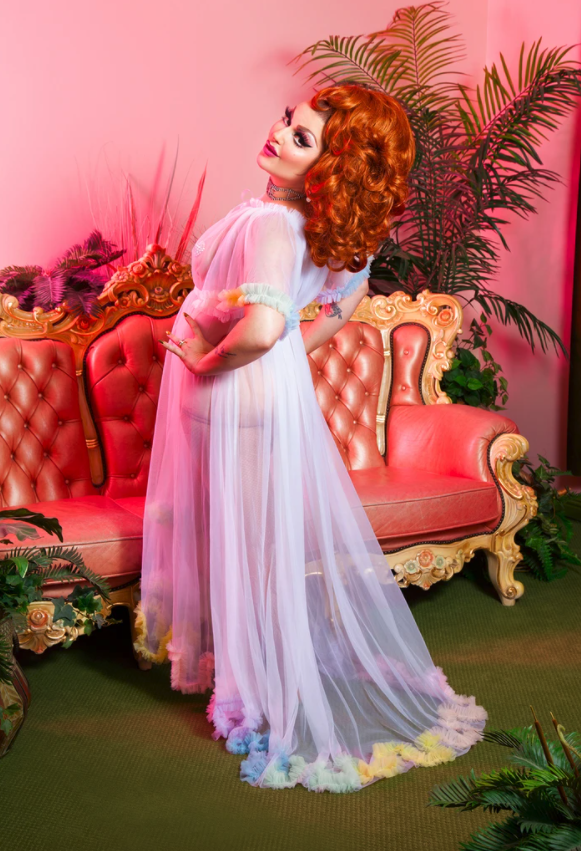 Key to mention is the lack of desire for many in the gender non-conforming community to wear undergarments that do not feature the common to drag/cross-dressing culture “gaff.” The gaff is a compression-style garment that tightly fits in the crotch and thigh -- often to the point of needing to pull the penis backward between the legs while pushing the testicles up into the inguinal canals located alongside the urethra -- to smooth away the significant outward appearance of male genitalia while wearing traditionally feminine undergarments.

It is possible to wear gaff-style undergarments with a less restrictive cut in the waist, thigh, and crotch. However, it is my opinion that for literally unrestricted gender interplay to exist, the lack of an absolute need to “tuck” is ultimately essential.

Overall though, the presence of a higher population of happily male-presenting and genderfluid custom lingerie customers is an unquestionably welcome development.

When I was 15 years old, there was no more nerve-racking moment for my gender-confused self than buying department store, Fruit of the Loom women’s underwear, only to get home and learn that men’s and women’s underwear are cut differently. At 25, being a more gender-aware person, trying again with bralettes, and being left with chest bruises from my circulation being restricted literally hurt my heart. At 40, learning how to wear my best self under my sleeves, has been an incredible relief.

Now relieved, I get to learn how to live a custom-fit life of often transcendent perfection. My most ideal vision of what truth, beauty, and goodness mean uniquely to me is on my skin and next to my heart. My best and most independent self is forever emergent and eternally grateful.