January is that time of year when we all start thinking about fresh starts, gym memberships, and wardrobe makeovers. While I'm not opposed to any of these things, I don't like the pressure this time of year puts on people. It's easy to start looking for reasons to change your life and your body rather than making conscious decisions about them. Like most people I've spent the past few weeks thinking about my goals for 2013 and I've come up with one big one: body acceptance. Here are some ways I'm making progress on my goals that I hope can help you start down the same road during the coming year. 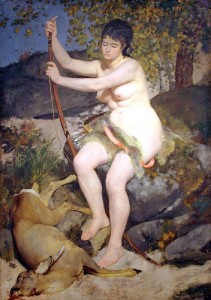 1. Realize that body trends are just that --- fads that come and go.
I spent some time in an art museum for the first time in ages over the holiday break, and the collection contained a ton of gorgeous Renoir nudes. What struck me as I was going through them is how many of them looked like me (minus the dead deer, strategically placed leaves, and various artistic paraphernalia). What was even more exciting was the way the tour guides described these beautiful women --- like they truly believed these women could go up against a modern-day supermodel and win. I love how these artists clearly believed every part of this woman was valuable, including the extra weight in her stomach and her wide hips.

As Heidi Klum says, "one day you're in and the next day you're out!" Various body types have been trendy at different points in history, which mostly has to do with things like how wealth was displayed in different eras and very little to do with actual standards of attractiveness. Luckily this leaves us all with great images from the past to inspire us, as well as the realisation that we might as well give up and accept ourselves as we are since "attractiveness" is pretty contextual anyway. 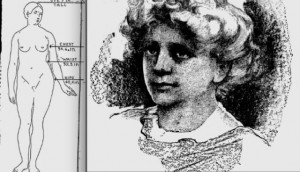 2. Take it from Elsie and don't give up on the beefsteak.
Have you heard about Elsie yet? In 1912, a bunch of professors were searching for the "perfect" woman with proportions close to the Venus De Milo. Shockingly, they found beefsteak-eating Elsie Scheel, who was also an "ardant suffragette," 5' 7" and 171 pounds. If you haven't read the rest of the article, you should, as Elsie sounds like the best Girl's Night Out participant ever.

Modern women are trained to have a weird relationship with food, and it's refreshing to read about a woman who couldn't live without her beefsteak and wanted to grow vegetables for a living. During 2013, I'm going to try and channel my inner Elsie by not hiding my gourmet cheese addiction and being the loudest and proudest version of myself. 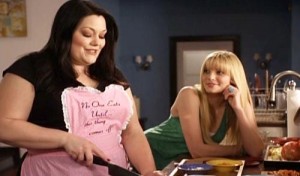 3. Stop confusing your personality with your body type.
I used an embarrassing number of hours in December to catch up on my Netflix queue, which included lots of episodes of Drop Dead Diva. I started it because of the premise; thin girl dies and gets brought back to life in the body of a plus size lawyer, but kept watching due to the hilarious and insightful relationships between the characters. It would have been an easy to structure it as plus size women versus non-plus size women, but the treats all of the female characters as individual personalities rather than boiling them down to a body type. The plus size woman and the skinny woman have a rivalry, but it's because they're both wickedly smart and working to become a partner at their law firm rather than a weight issue.

It's easy to feel like your body type dictates who you are, especially during January as you're surrounded by ads hawking new diet plans or new makeovers. It's also easy to start resenting other women with different body types and making snarky comments about them, which isn't fair either. Focus on the parts of your personality that make you happy, and work on finding the parts of other people's personalities that define them instead of grouping them by looks or body type.

4. Buy stuff that makes you look great now, not later.
I went through a period of time earlier this year when I ditched everything in my wardrobe that I didn't love or didn't fit. Surprisingly, I found myself rebuilding a completely different type of wardrobe than the one I started with. I ditched all my jeans and unflattering sweaters and replaced them with comfy knit dresses that emphasized my waistline. I discovered that, after wearing them for all these years, I secretly hated wrap-style sweaters. Mostly though, I started to make the most of the body I have now instead of the body I had as a teenager or the one other people told me I should have in the future.

My weight hasn't changed much, but I look and feel like a whole new person. I get tons of compliments when I go out, and I think it's due to the fact that I love what I'm wearing rather than just wearing something to cover up. Whatever your body type, there's a whole bunch of flattering clothes out there for you. Keep digging, and don't settle for anything that doesn't make you feel like a million bucks. 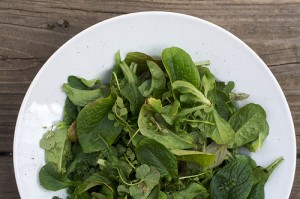 5. Do things because they make you feel good, not because you "should" do them.
Once upon a time, my little cousin wouldn't eat salad. However, he had an older brother and desperately wanted to be the taller of the two. During one holiday dinner my mother convinced him that salad was the golden ticket to growing up to be taller than his brother. He ate so much salad that he spent the rest of the night throwing up green and hasn't touched a vegetable since.

When you're making new habits or new resolutions, make sure you're doing them for you and not because you read them in a magazine or heard about them from your sister. Eat broccoli because it is delicious, not because it's low-calorie. Find an exercise you like doing and stick to it in moderation, rather than burning yourself out trying to train for a 10k. Replace all of your old and busted bras so you feel fabulous on a daily basis. Pick up a new hobby or take a class you were too chicken to try before. Whatever you do, focus on the things that seem fun to you rather than the things you "should" be interested in.