Why Doesn't the Lingerie Industry Like Women of Color? 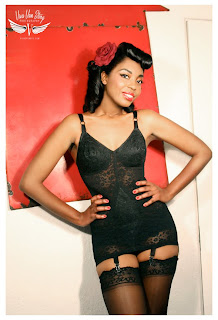 Today's article is on a subject very close to my heart. I've been debating if I should write this for weeks now, but after talking with other women of color in the lingerie industry and doing a bit of soul-searching myself, I've decided there's no way I can't not post this. The Lingerie Addict is about all aspects of the lingerie community, even the parts I don't really like.

Awhile back, I had a conversation with another woman of color in the industry (who prefers to remain anonymous), and she asked me flat out, "Why don't lingerie companies use black models... especially in retro lingerie?" After thinking it over, I realized this issue wasn't limited to black women; all women of color are underrepresented in lingerie. Hispanic, African-American, Asian, Native American... it doesn't matter. When was the last time you saw a woman of color modeling on your favorite lingerie website?

We know (or at least I hope we know) that beauty comes in all colors, just as it comes in all shapes and sizes. So why don't lingerie retailers, designers, and photographers diversify their literal portfolios? It's gotten to where I'm surprised when I see a model of color (pleasantly surprised, but surprised all the same) and, quite frankly, that's just sad. Seeing a beautiful woman of color modeling lingerie shouldn't be a shock or a rarity, it should so happen so often I barely notice it.

What do you think is the problem here? Are there just not enough models of color? Is the lingerie industry biased? Do people (mistakenly) believe that women of color simply don't look good in or appreciate fine lingerie? I'm really interested in hearing your thoughts. A week or so ago I asked this question on my Facebook page and got some interesting responses from lingerie fans, bloggers, and retailers alike. Here's what they had to say:

I really don't know a "good" excuse for that. At first I typed reason but there is no reason, it really would be an excuse. ~Koko

Echoing Koko above, I'll say 'no *good* reason'. Believe me, I've looked around the net for my blog, and it's a sparse-but-thankfully-beautiful-few. I'm going to guess 'Myopia'. By 2010, I'd hate to think it's anything else. Also, a really dumb marketing move. ~Frankufotos

I ask myself that question all the time. Although I will say that Victoria's Secret has always had at least one. Few others can same the same. Do they think that we don't love & wear lingerie as much as our counterparts of other races??? ~Madison

Well, when it comes to small businesses, who can't go through agency to book professional models but rather go the semi-pro route, like in my case, I really have to say that models of colors are a rare gem. If you can book a model for 500-1,000EUR a day, knock yourself out, but in the alternative industry, there aren't that many.  That's just one of the reasons, of course.  ~Sophie

So very true! It's rarely seen. And it makes no sense. Their should be more lingerie models of color out there! I was at the CurveNY Expo and there was such a gorgeous girl modeling lingerie - and it made me wonder why aren't there more! ~Jenny

Within the UK, less than 10% of the population at the time of the last census defined themselves as BME (Black & Minority Ethnic). The distribution varies widely from area to area, though. Still, worth bearing in mind for UK brands who sell predominantly in the UK, the situation is somewhat different from the USA.  ~Catherine

I had this conversation right after our SS11 shoot when talking about who I wanted to model the next season and who would serve as my muse, so definitely stay tuned for our next shoot. As a designer I think it's important to portray beauty in every woman, and absolutely agree that in the industry as a whole there is a lot less color than there could/should be. I also agree with Sophie; it's definitely hard to find professional models on a budget, and that can narrow the pool! ~Layla