Disclosure: This item was purchased for me to review by The Lingerie Addict. All opinions are my own.

Do you believe in love at first sight?

If you don’t, you’re wrong. It absolutely exists. I know because it happened to me the first time I saw one of these feather-covered, sheer dressing gowns by Boudoir by D'Lish. Sigh.

The designer behind these robes, Catherine D’Lish, is somewhat of a jane-of-all-trades in the burlesque world as both an incredible performer and fantastic costume-maker. She frequently performs alongside Dita Von Teese, with both performers wearing costumes she’s made.

In the past, TLA reviewed her loungewear line although I think I first came across her lush dressing gowns when we featured her eBay store in 2014. How can you look at those photos and not fall in love? 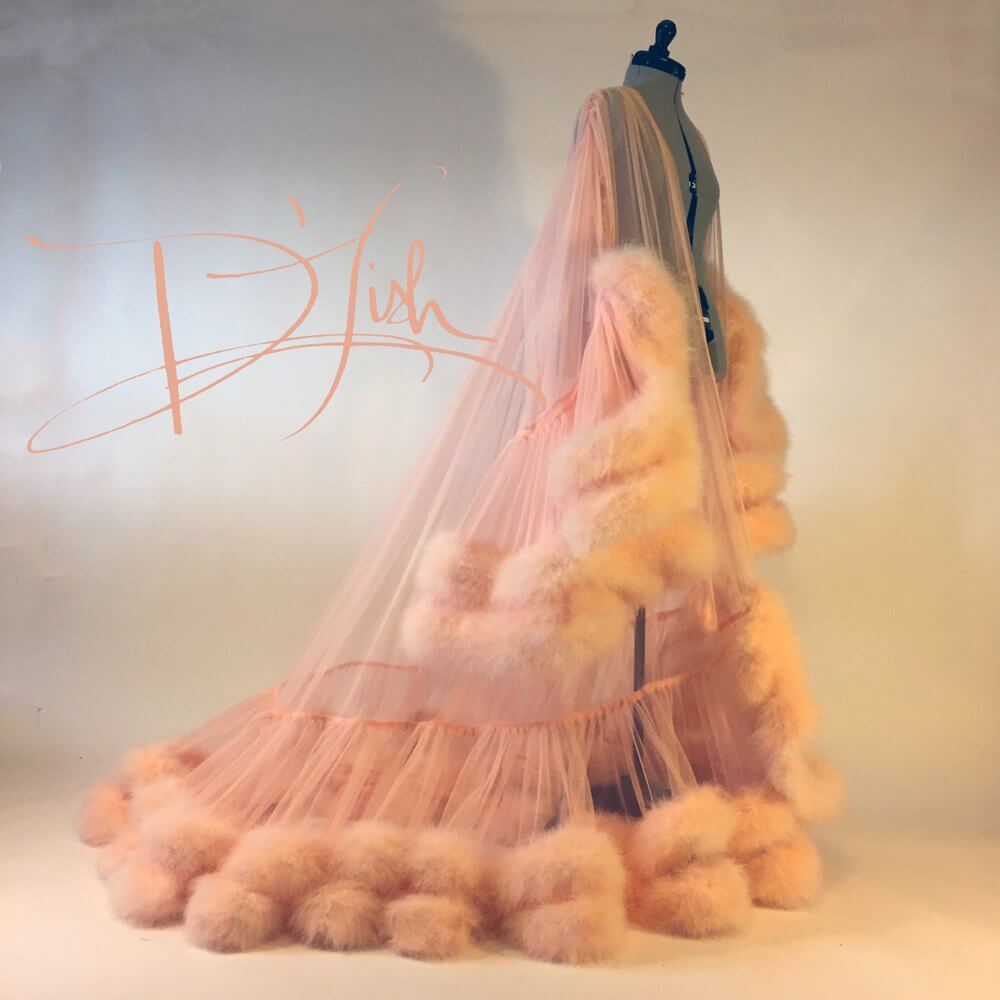 To be honest, these gowns are entirely frivolous garments. You can’t wash dishes in them because the sleeves are covered in feathers. You can’t answer the door in them because they’re completely sheer. They’re massive, luxurious, and totally impractical. In other words, they’re everything a lingerie lover’s dreams are made of! 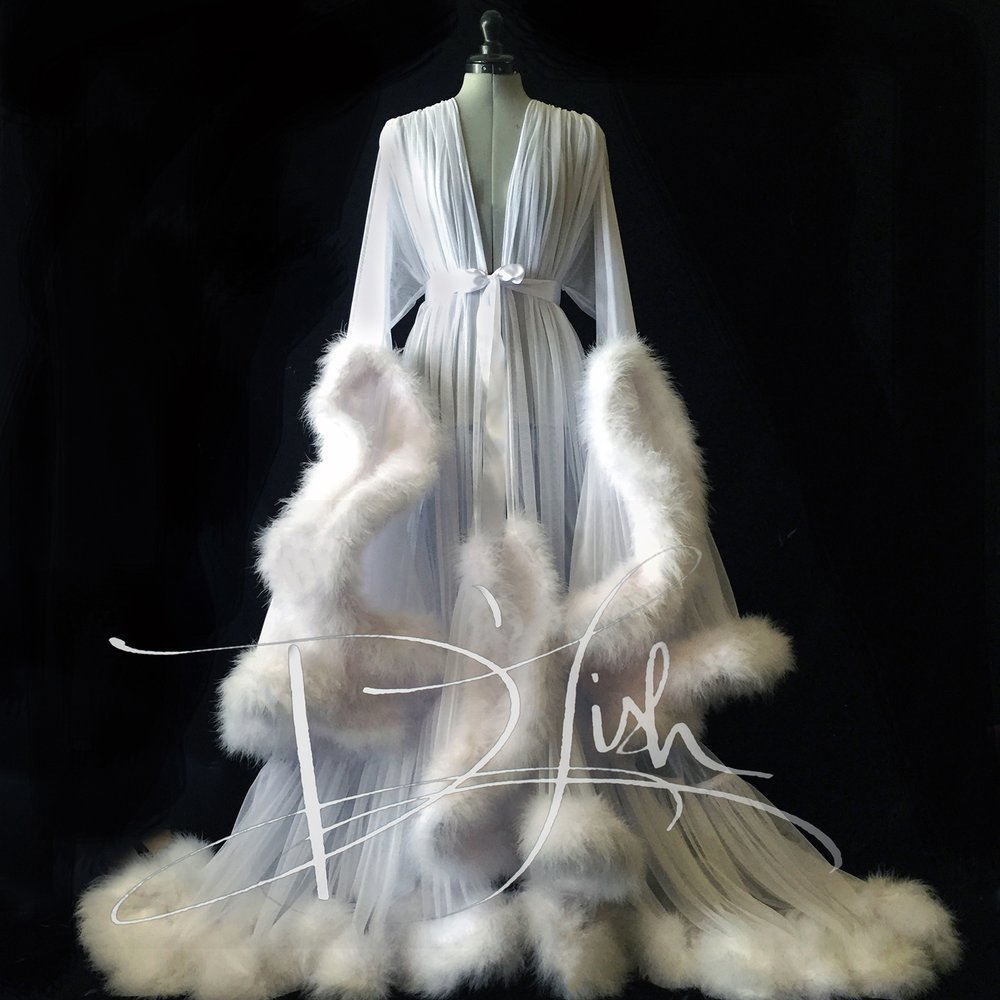 I assumed I wouldn’t have one until I got married or became a Real Adult with Money or something. After all, they’re opulent enough to be wedding dresses, and one gown wouldn’t have even fit through the door of my first bedroom in NYC. But when Cora asked me what I wanted to review this year…well, I knew what my top request would be. 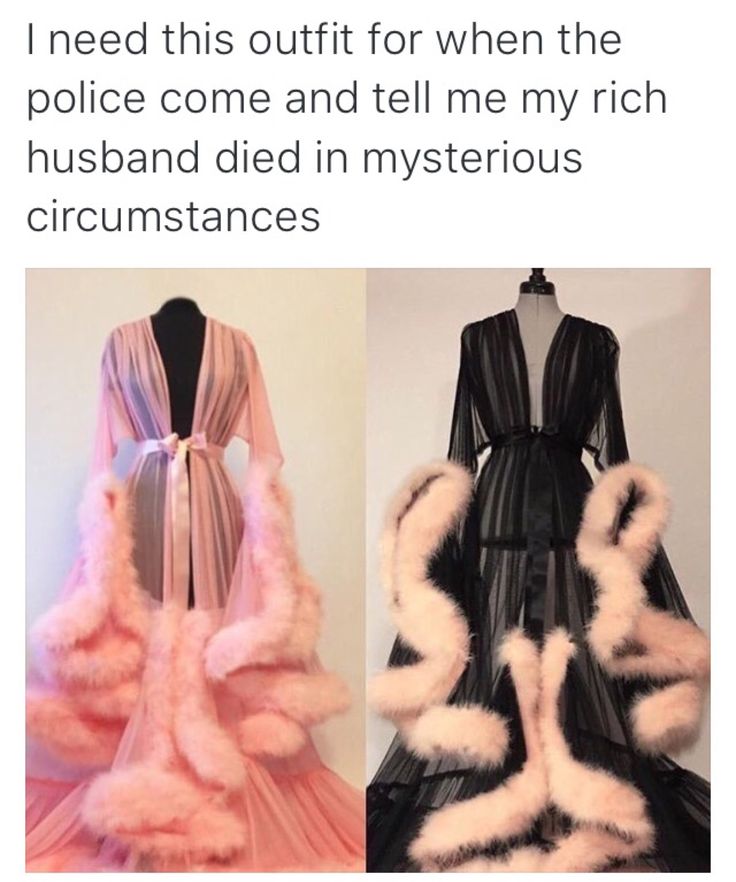 Above, the original meme that propelled this robe out of the burlesque and lingerie worlds and into the hearts of millions of Twitter users. The internet is weird, man.

And not just for my sake, either. After the above meme, featuring Catherine D’Lish’s Dressing Gowns, went viral, there seemed to be two main reactions to the price of these pieces.

With all that in mind, this review serves to answer the two biggest questions I’ve heard about this robe.

Why is This Gown So Expensive?

Catherine D’Lish’s Marabou Cassandra Dressing Gowns come in three price ranges: Regular ($299 to $399), Deluxe ($100 more) and Extra Deluxe ($200 more). The three styles are identical except for the amount of feathers sewn around the hem and sleeves. Based on photos and the construction of my gown, I assume the Regular Cassandra has two rows of marabou feathers, the Deluxe has four and the Extra Deluxe has six.

The web store has some price discrepancies between colors. When I placed my order for this gown, the Deluxe pink version was listed as the same price as the Regular version, so naturally, I snagged the Deluxe. Why would I not want extra fluff?

(To be honest, I had some trouble deciding between the four shades of pink. In the end, I decided to go with the iconic, classic pink. Because if I’m going to own something that looks like it belongs in Barbie’s dream house, I figured I should go all the way.) 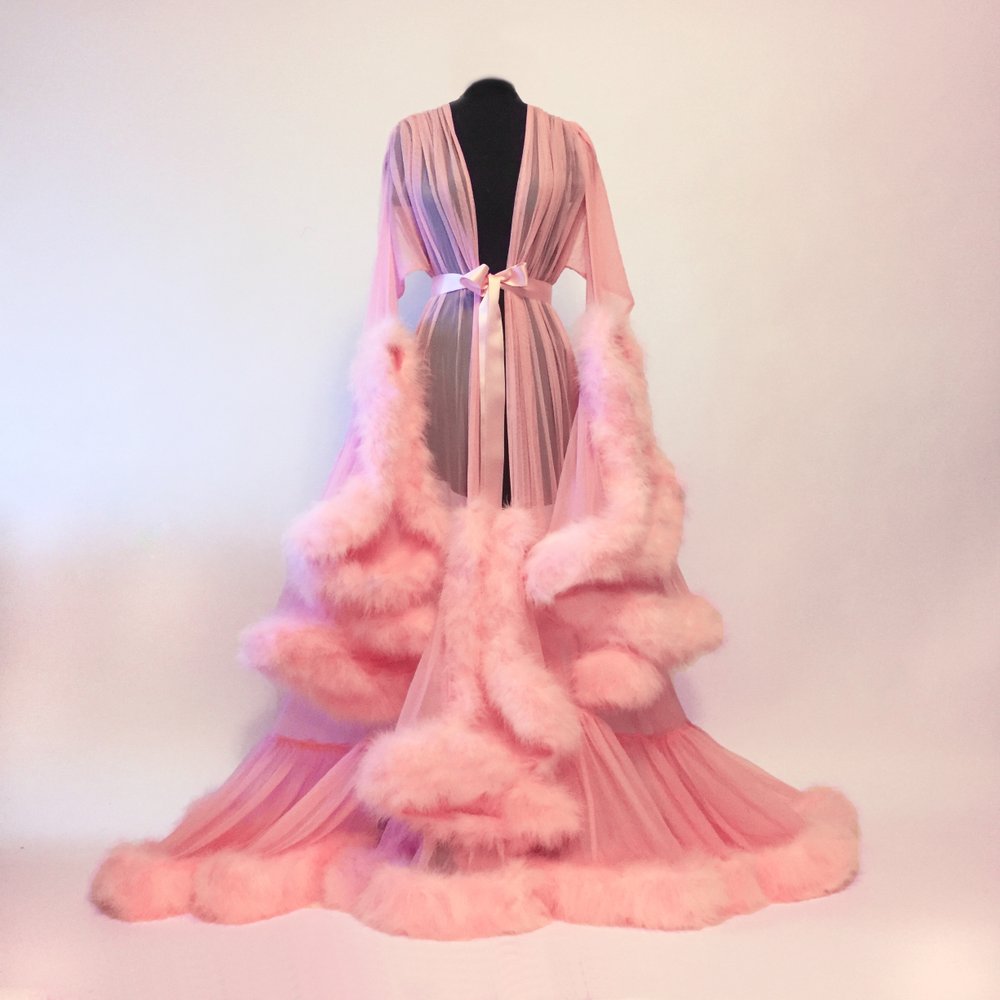 A few days after I placed my order, Catherine herself emailed me to confirm my color choice and get a few measurements: my bust, my height, and, most importantly, whether or not I wanted a train. My answer was yes. Yes, I do absolutely want a train on the most ridiculously frivolous item of clothing I've ever owned.  If you want something a little more practical, foregoing the train might be a prudent decision.

The gown arrived about 5 weeks later. It was nicely folded and tightly packed into a cardboard box that practically exploded with candy pink fluff as soon as I started opening it! 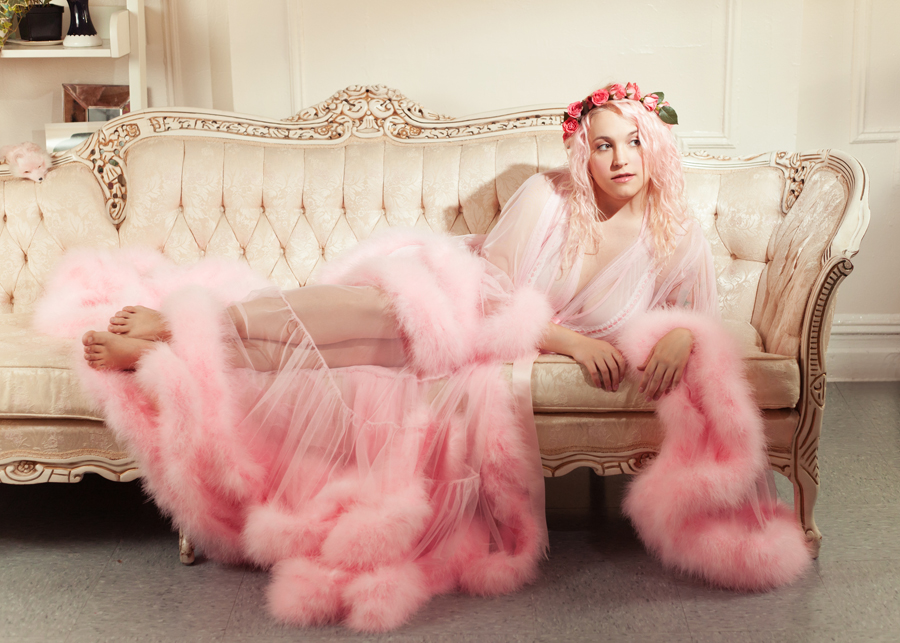 This thing is just as lush, or maybe even more lush, than it looks in photos. It comes with a long, notched, satin tie for your waist, which seems almost useless against the beautiful bounty of fabric.

There are so many yards of feathers and mesh that it’s hard to tell what’s up, what’s down, what's inside-out, and how many times the sleeves are twisted around your wrists (which is bound to happen with the amount of fabric used here). Putting it on is a process in itself - one that will have tiny marabou feathers scattered across your floor.

Surprisingly, shedding is not much of an issue. I find one or two tiny feathers every time I wear it, which is pretty impressive for a robe with this much marabou. 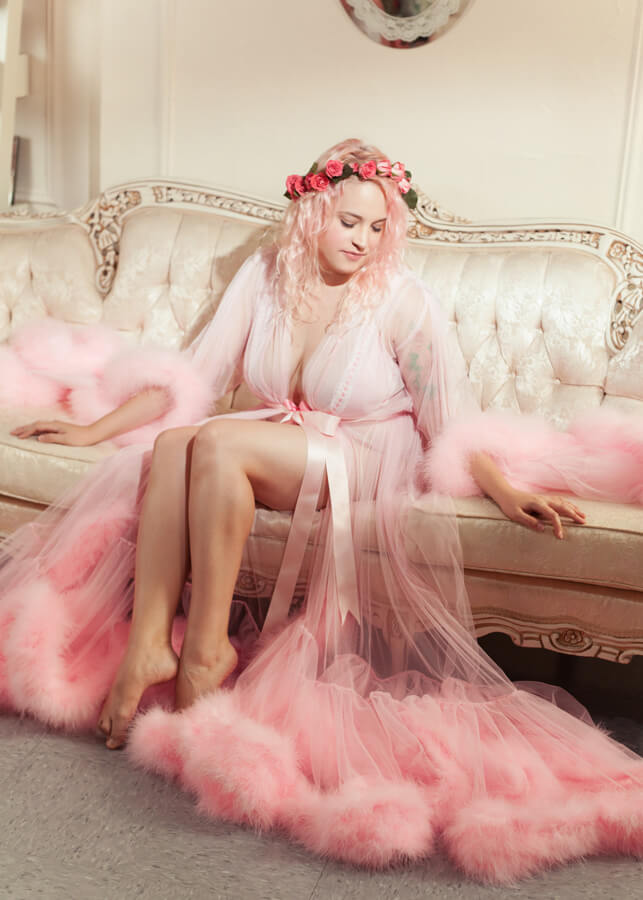 The weight of the feathers is what lends that beautiful draping to the sleeves and hem of this robe. The back and front of the robe are gathered for fullness at the shoulder seams, with even more yards of English mesh gathered around the hem.

The sleeve cuffs are also made of massive amounts of gathered mesh forming an incredible bell around your wrists (or, to be more accurate, around the general vicinity of your wrists). Add thick rows of feathers to those gathers and waves of fluff naturally ripple around you. 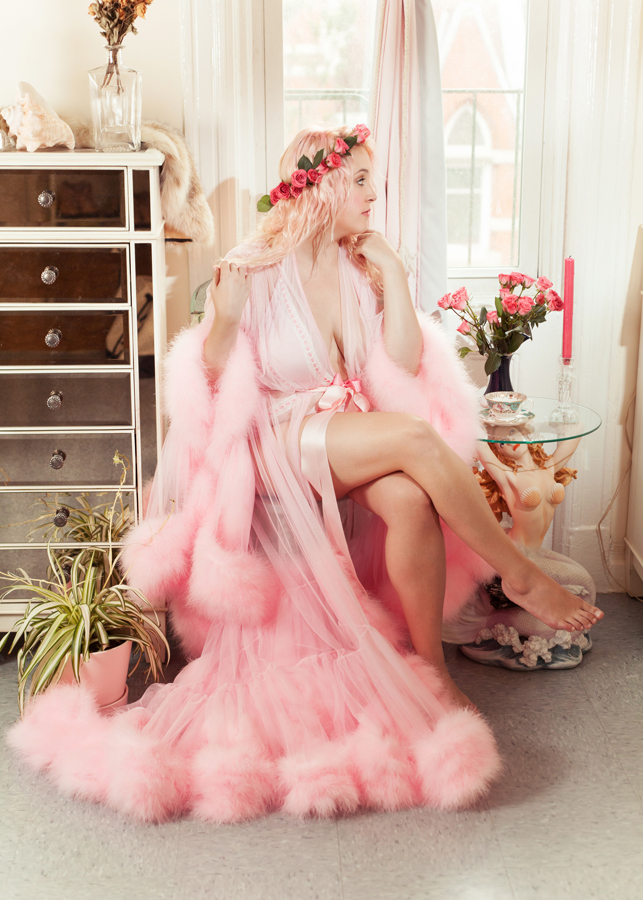 The dichotomy between the thick feathers and soft mesh worried me, however. Would the feathers pull on the mesh, causing it to stretch out? Would the shoulder seams pop after a few wears?

I was so pleased to find the mesh is weightier than I anticipated. The feathers are heavier than the fabric, but it’s sturdy enough not to stretch when it’s worn. When the robe is hanging in my closet, I do keep it inside a short garment bag just in case, so most of the weight sits on the bottom of the bag instead of pulling on the shoulders.

There’s very little chance of any seams popping, either. Everything is sewn with French seams, which not only look nice and clean, but are extra strong.

Wearing this gown made it easy to understand why it costs so much, but as I floated around my room in a sea of pink marabou, I couldn’t help but wonder… 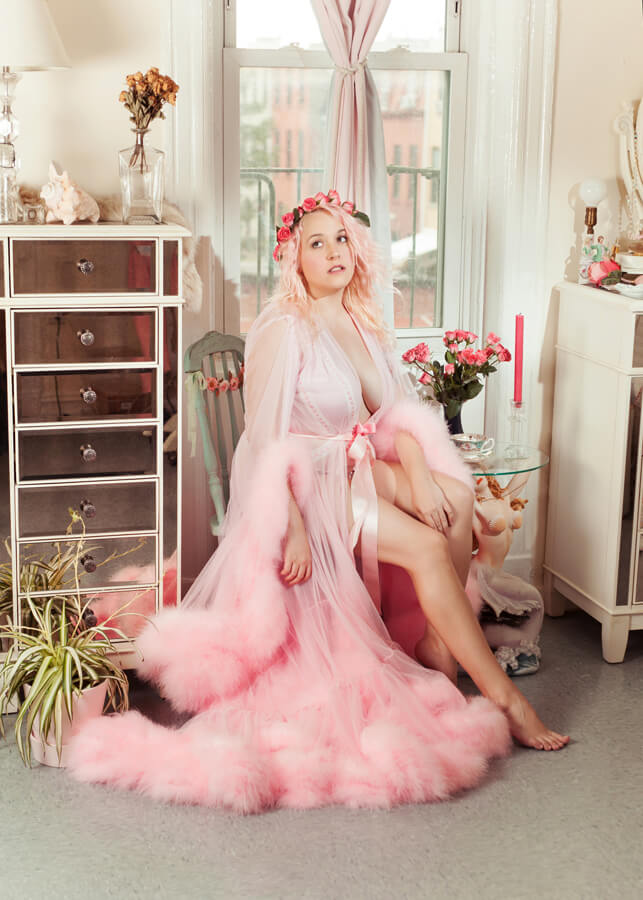 Why is This Gown So Cheap?

Well, first, Catherine D'Lish's Dressing Gowns are a fairly simple design. The sleeves aren’t set-in sleeves, but rather large rectangles with a gathered cuff attached. The seam across the shoulders and back is straight, with no neck curves. So although the materials are ample, the construction, in general, is fairly simple, which cuts down on sewing time significantly.

Then there’s the sewing itself. The seams are sturdy and clean, but vary in width by a few millimeters in some areas. The yards of feathers are sewn on slightly irregularly, which is only noticeable from the back, and only under an incredibly scrutinizing eye, because the feathers roll under slightly and cover up the stitching regardless.

Basically, this gown is so inexpensive because this is not a couture-level garment. 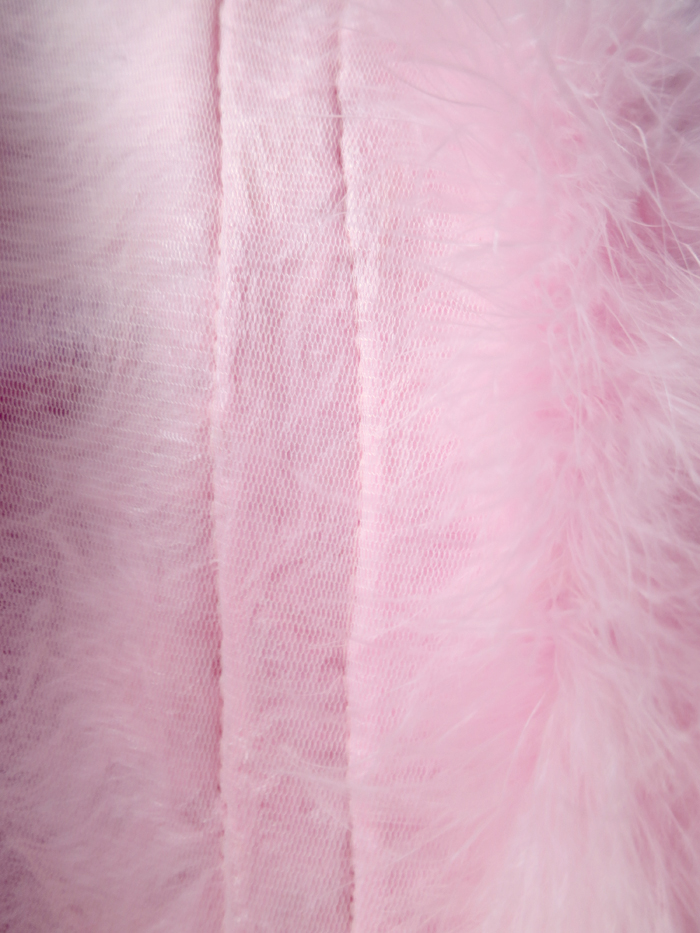 Detail of the slightly-irregular feather stitching along the underside of the sleeve. Photo by Quinne Myers

This isn't a poor quality garment by any means. The stitching would be impeccable to most lingerie-wearers without training in apparel construction.

Even as someone who does have training and is pretty particular about her clothing, I have no problems with the construction of this piece at this price point. The sewing is invisible for the most part, and sewing feathers to stretchy mesh is hard. 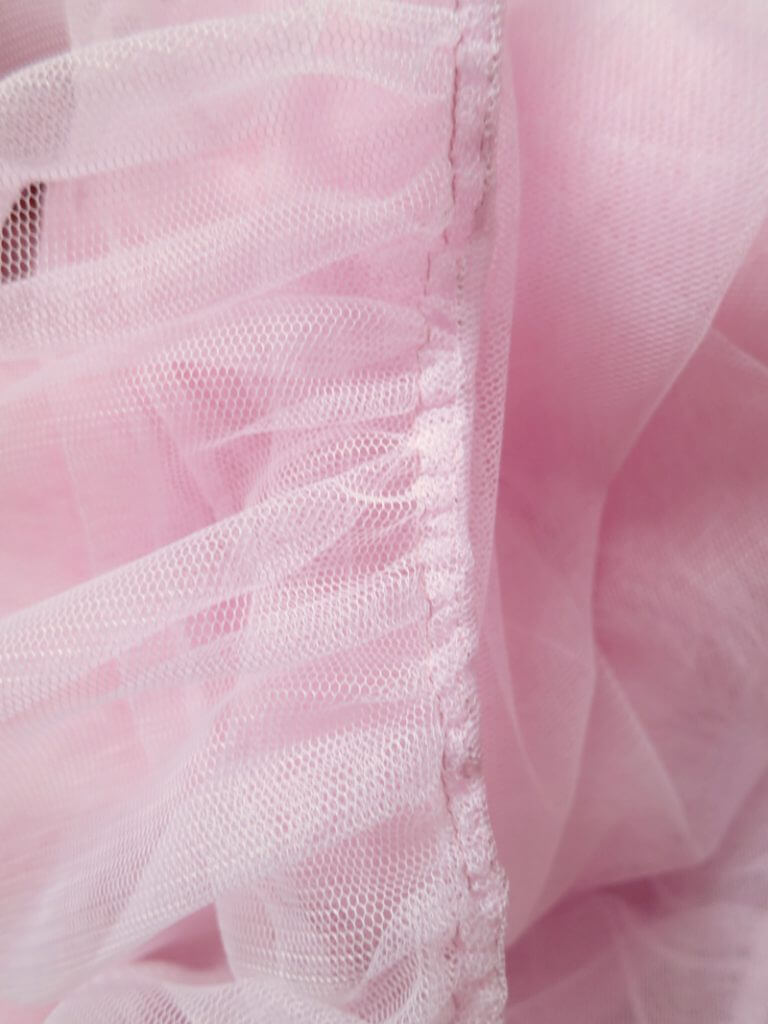 Detail of an enclosed French seam on the Cassandra gown. Photo by Quinne Myers

If this was a couture-level gown, the sewing would be impossibly impeccable - to a point where most people, in today’s fast-fashion focused society, wouldn’t notice or care. It would also be entirely unaffordable.

No, $400 for a robe isn’t typically in the “affordable” category by any means. However, for a custom-sized, made-to-order, floor-sweeping garment, with yards and yards of marabou feathers, giving you the effortless, over-the-top drama of a Harlequin romance novel cover? Anyone in the apparel industry would tell you that’s pretty damn cheap. 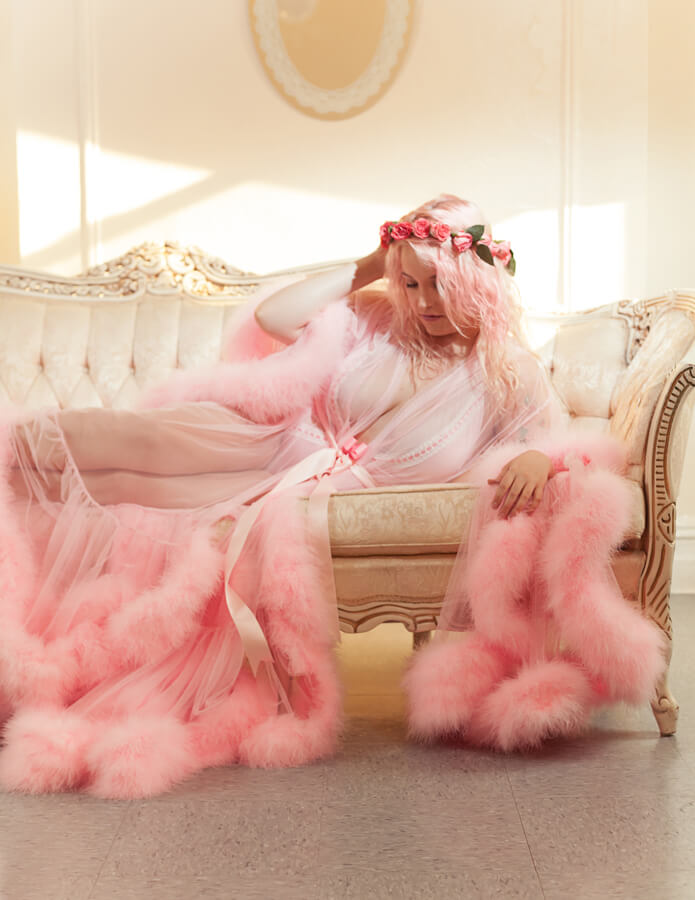 That’s a hard question for me to answer. From a purely artistic point-of-view, and given her status in the burlesque world, I think this robe is undervalued. The Cassandra Dressing Gown is the type of garment high-end apparel labels would price in the four figures, and this will definitely be considered an iconic garment from today’s lingerie era.

From a cultural point-of-view, in a society where most people typically only spend hundreds on practical garments (like a nice leather jacket) or special occasion garments (like a wedding gown), and not on garments that will only live inside your boudoir (like a sheer feathery robe with a train), her work is priced to sell.

What do you think of Catherine D'Lish's Dressing Gowns? Do you own one? Would you wear one?