My Date With Dita Von Teese: An Interview With The Queen Of Burlesque 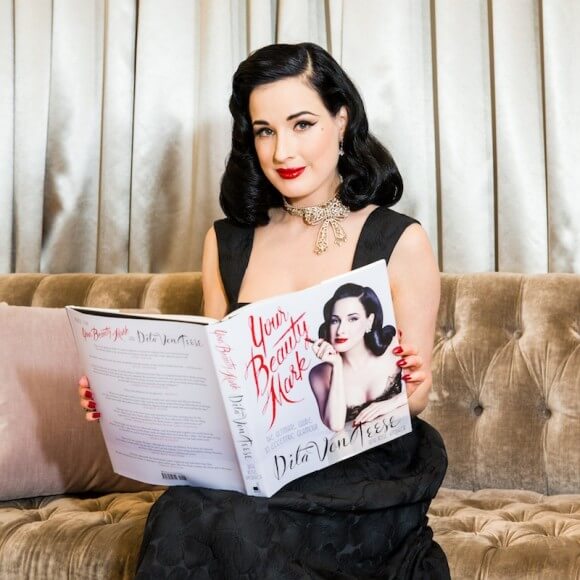 It may be a brand new year, but I’m still finding myself reminiscing about last month when Christmas came early for me in the form of a one-on-one interview with the Queen of Burlesque herself: Dita Von Teese. When I got the news of this awesome opportunity I had to pinch myself: “The Queen of Burlesque and me? Face to face?” I couldn’t believe my good fortune and just a few weeks before Christmas I felt it was a holiday gift from the universe.

Ms. Von Teese happens to be a fan of The Lingerie Addict blog herself and was in the Bloomingdales flagship store this December to sign copies of her new book Your Beauty Mark: The Ultimate Guide to Eccentric Glamour as well as promote her new holiday lingerie collection. Her recently launched book is chock full of tips and advice on how to cultivate your unique personal style while her lingerie offerings were as chic and timeless as usual. 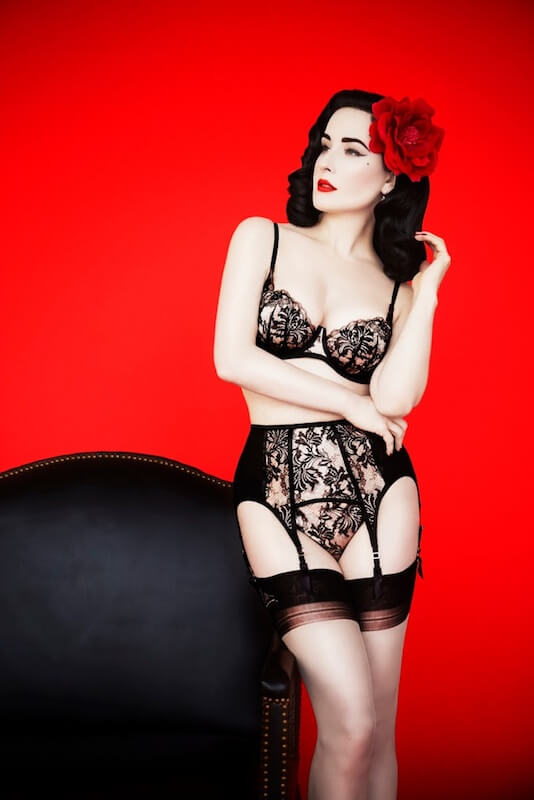 While I was excited to flip through the pages of her new book for some much needed pointers (and to see the new lingerie of course), I was more nervous than I expected to meet this savvy businesswoman who has inspired me in both my personal and professional life. I had so many questions for the Queen of Burlesque, and was looking forward to not only learning about her newest ventures but also to get a glimpse into her every day life and find out what she is like on a more personal level. So as I strained to keep my composure and calm my nerves I embarked on a fifteen-minute whirlwind interview with one of this lingerie lover’s most idolized celebrities. 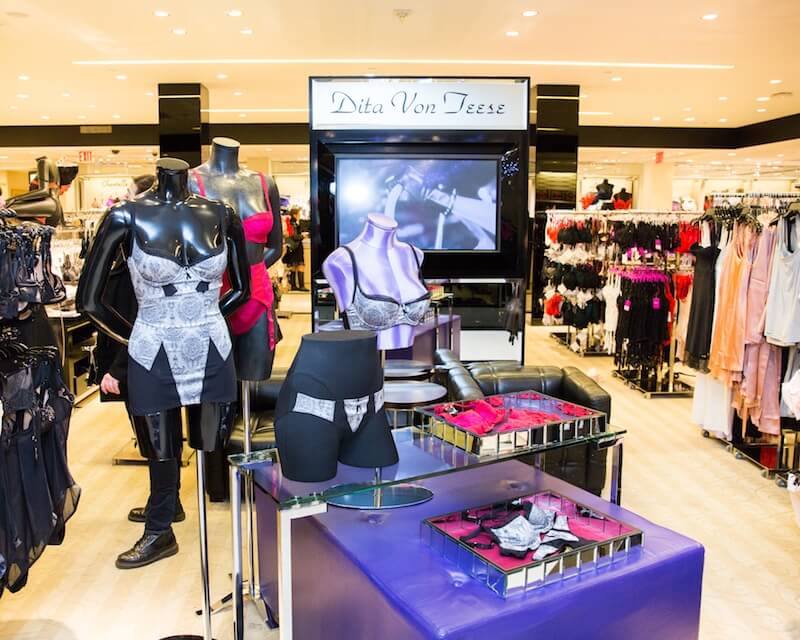 TLA: So I know you have your collection here at Bloomingdales. I was wondering…for the new collection that has come out for holiday 2015, do you have a favorite standout piece?

Dita: Well I do love the Madame X with the little silver sequins. That’s my favorite from the line. Of course I love a little sparkle in holiday lingerie or evening lingerie in general and it’s just sprinkled with little tiny sequins that don’t interfere with your comfort level.

Dita: Yeah I think so. I mean it’s no secret that I’m obsessed with nostalgia and in finding ways to make it modern and relevant. So I think that they connect. I like things that are timeless. I like timeless beauty. I feel like my beauty philosophies are very.…well, you can wear them at any age and they translate well on all types of beauties. And of course it’s the same thing with the lingerie. I feel I’m always trying to design stuff that I think is timeless and elegant and classic but still with a dash of eroticism. And I’m always preaching for people to try new things. That’s the basis for the beauty book: to give people permission to try new things and dare to be different. And with lingerie I feel the same way. Like, I’m always preaching garter belts. When I first started doing the line every department store was like “We don’t sell garter belts”. And now they’re like “We are selling a lot of garter belts”! 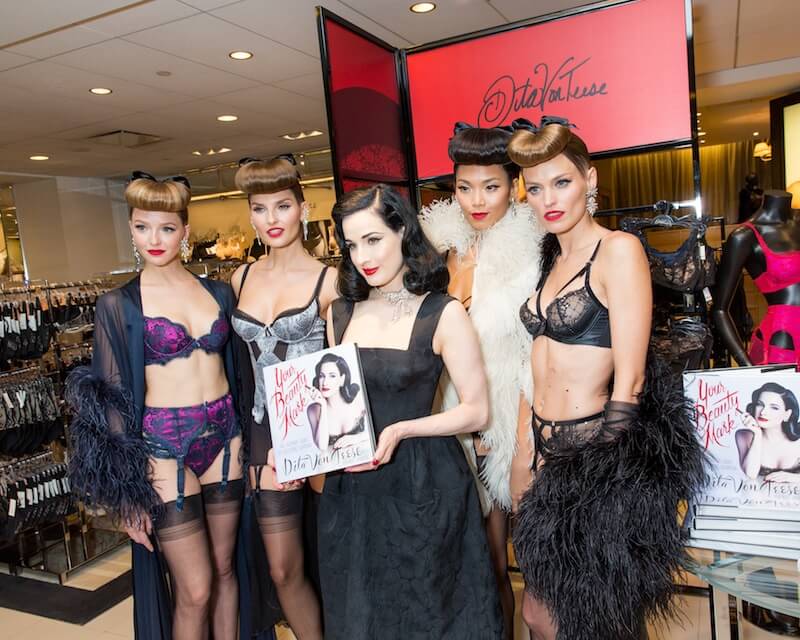 TLA: Oh yeah, I agree they are much more popular now. In my boutique I’m finding that one of my best selling panties is a thong with detachable garters so I believe they have definitely come back!

TLA: And what kind of advice would you give to a lingerie newcomer who is just first kind of getting into the scene and trying to figure out what they like?

Dita: I would say the first thing is to find a really great salesperson that you have good chemistry with and that you trust. Someone who is very knowledgeable about lots of different brands and that you can tell loves lingerie themselves. I would say to not be afraid of trying new things because one of the great things about lingerie is underneath your clothes you can be whoever you want to be and it’s your chance to have a secret persona if you want to. So I love that and I would say to also really find out your true bra size. That’s so important and so often we choose the size that we want to be instead of the one that is the most comfortable. One of the keys to be able to wear lingerie in an effortless way and in every day life is wearing the right size so that it doesn’t bother you and isn’t annoying. 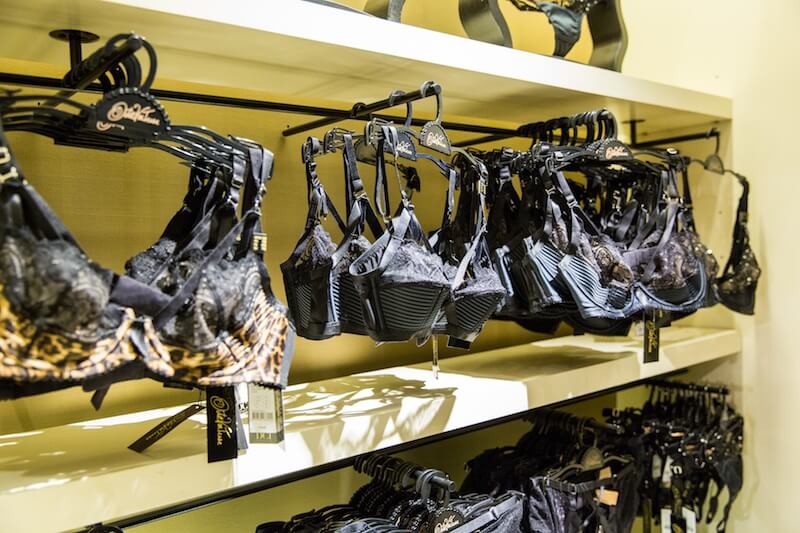 TLA: I definitely agree with you there! So since you started your own lingerie line have you learned anything new about the market? Because you’ve been in business a few years now, yes?

Dita: Yes it’s been almost 5 years and, yeah, I’ve learned a lot for sure. There are a lot of things that I have to find the balance between. Like the things that I want to wear and the things that actually sell. I mean, I have to be adventurous and do things that are within my code but I also want to understand the consumer and what she wants to buy and find a happy medium. Because for as much as I want to show off and create lingerie that I think is the most amazing lingerie ever, I also have to consider that I want to have a lingerie line that lasts a long time. I don’t want it to be like “Remember when she used to have a lingerie line?” because that could easily happen if I just went wild and did whatever I want. But then at the same time I definitely noticed that some of the pieces that I thought were more risqué or a little bit too fussy ended up being really great sellers. So it’s a balance and me and my CEO have to listen to each other so that we we strike a great balance.

TLA: That is important. I have similar feelings where I get very excited and I want to buy all these amazing things for my shop but I realize that people often go for the classic styles in the end. 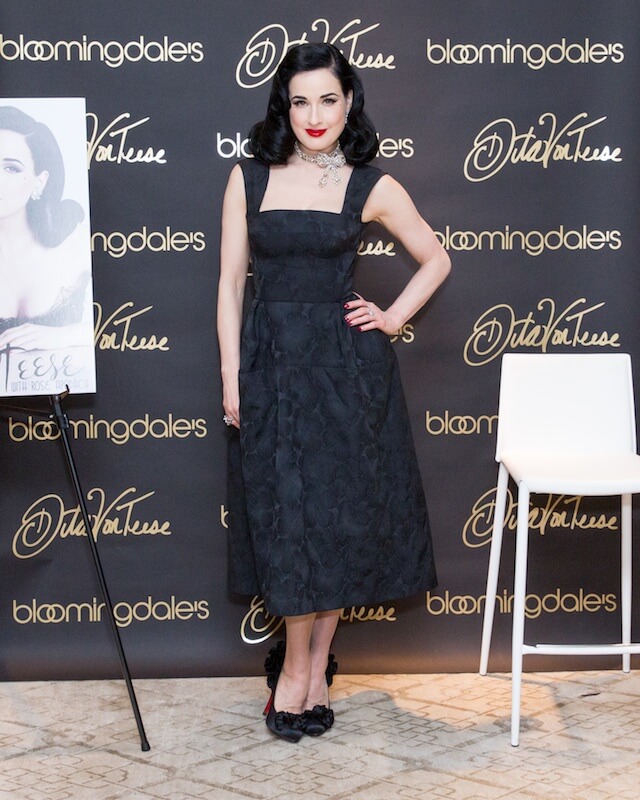 TLA: And then lastly, if you could only choose one piece of lingerie to wear for the rest of your life what do you think you would choose?

Dita: Oh gosh…I mean - I’d have to say a beautiful bra is a necessity for shaping and for looking good under your clothes. But then I love garter belts and stockings. I can’t imagine not having that in my life…I don’t need the underwear!

Dita: Yeah I don’t need the underwear…Haha, no - I mean I always wear underwear. But you know, if I have to choose…

TLA: Yeah. I’m with you on the garters – definitely! Thank you so much for your time and I have to just tell just on a personal level…I don’t know if you’ve ever heard of roller derby, the sport? Well I’m involved in the league here in NYC. I’m actually a jeerleader for them.

TLA: And in roller derby we each have our roller derby name, which is like a separate persona that’s often a bit sinister and a play on words.

TLA: And I have to thank you because you inspired me years ago to choose my roller derby name which is Dita Von Sleaze! 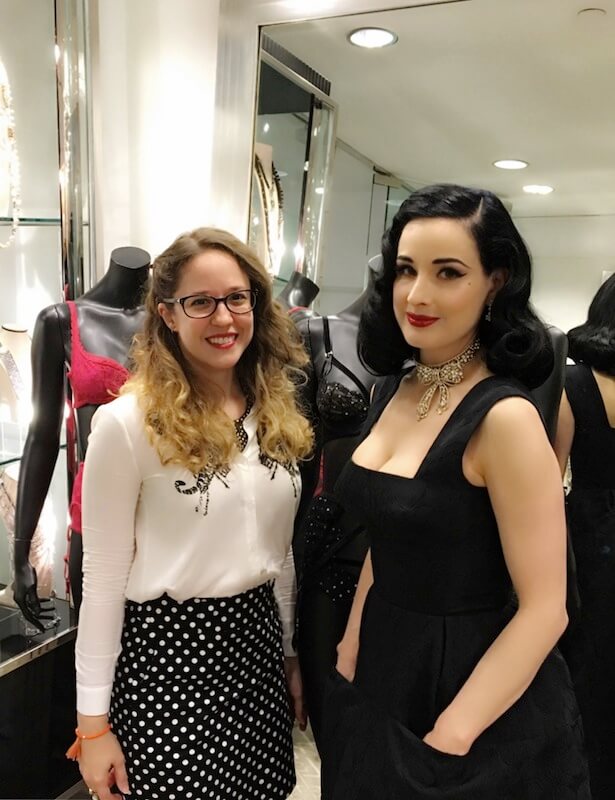 Myself with the lovely Dita Von Teese

TLA: So thank you for the inspiration!

Dita: That’s great – I like to roller skate now and then too. There’s a really amazing roller rink on the East side of LA and it’s like a time capsule on Tuesday nights. There’s the owner who I don’t know how old he is, but he plays the live organ and it’s amazing! It’s one of the most amazing, funniest things I’ve ever seen and you could cast a David Lynch movie there. It’s great to go there the people watching is the best so if you’re ever in LA you need to go for that.

TLA: I’m going to have to go – that sounds amazing! But yeah – I just had to tell you that.

Are you a Dita Von Teese fan? What would you ask her if you had fifteen minutes together?