What Is the Difference Between a Handmade and Mass-Produced Corset?

In last week's review of Timeless Trends, I touched on the distinction between handmade and factory-produced corsets. Understandably, this drew some confusion.

"Handmade" is not a regulated term and indeed sewn goods are created on machines manned by humans. So what defines a handmade piece? And what are the benefits to mass-manufacturing? 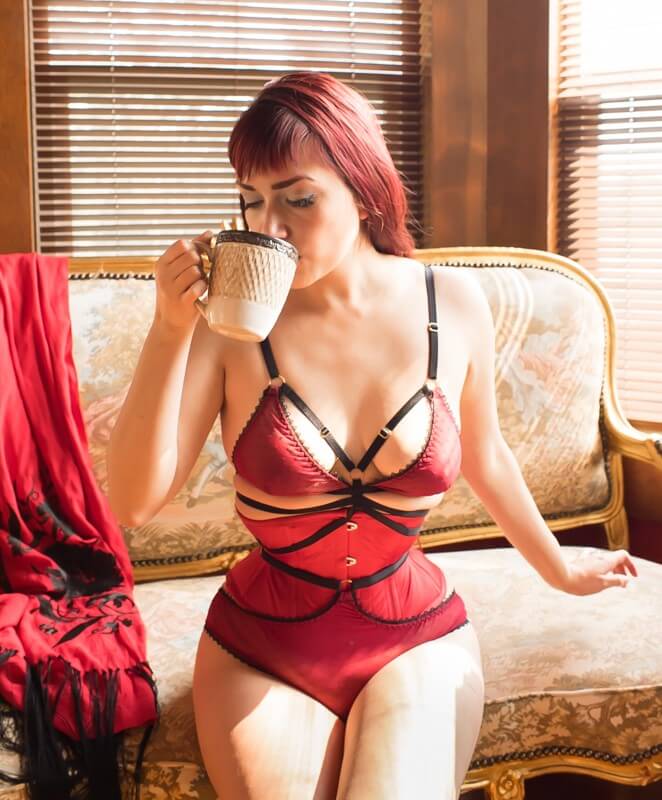 How Do We Define "Handmade?"

Each factory will have their own process for mass production. I've only worked in small studios (Dark Garden, Dollhouse Bettie), as is my preference. Still, we did learn some about mass manufacturing in the course of my BFA and MFA degrees in fashion.

Generally, a factory will have one person sewing the exact same part of a garment over and over. For a t-shirt, this might be setting the armhole, or sewing the side seam, or applying the finish on a crew-neck. Thus, one proposed definition for a handmade garment is that the entire piece was sewn by one person, as opposed to on an assembly line. Some may also expand this definition to include the fact that each piece is executed one at a time. 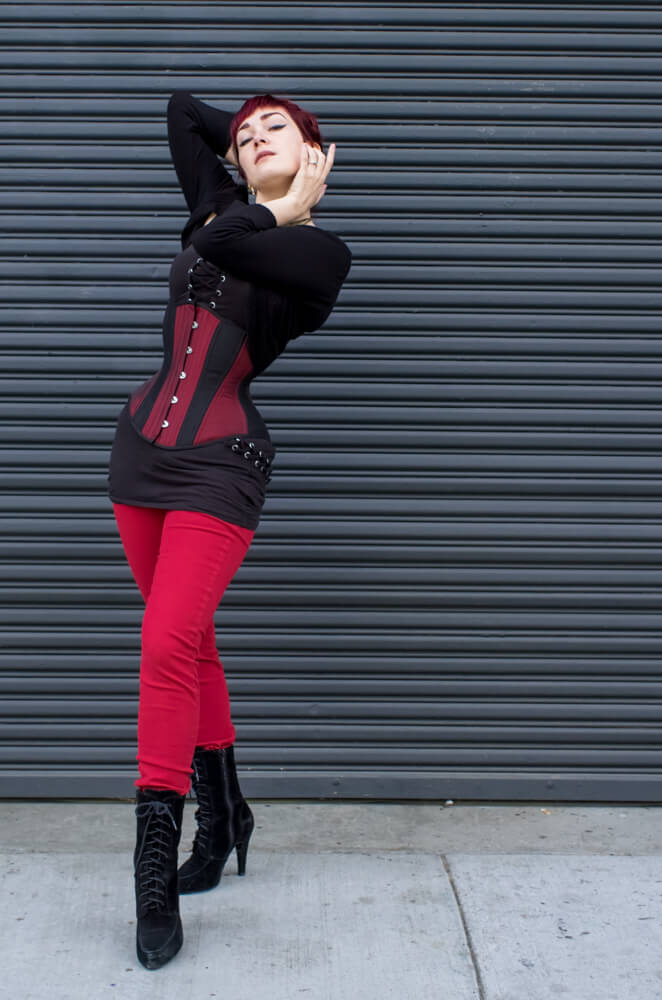 There aren't very many companies mass producing corsets, but the number of independent corsetieres in the world can now be measured in dozens if not hundreds. These independent corsetieres often work as a one-woman enterprise: fielding all sales, design, fitting, cutting, stitching, quality control, shipping, and customer service.

A rare few have advanced to the point where they have hired an assistant or three. The first thing many corsetmakers do when hiring an assistant is training them to take over their least favorite tasks. This may mean setting grommets or cutting out fabric. What does that mean for the handmade definition?

All, or the majority, of the sewing is likely to have been executed by the same person, but not all the work for the corset. The skill sets of cutting fabric and sewing garments are very different. If multiple orders are due around the same time, it only makes sense to first pattern then cut them all at once, stitch the bodies in tandem (if the same thread colors are used), then bone, bind, grommet, lace. 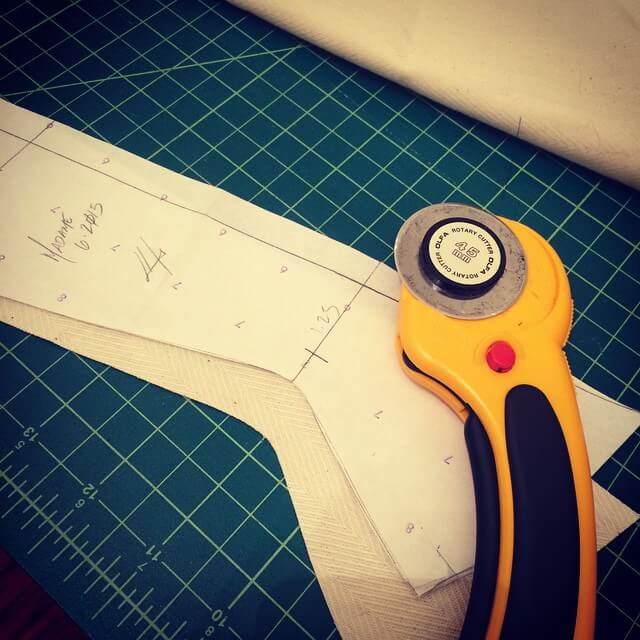 Pop Antique corset mockup in progress: Cutting is my least favorite part of the process. | Photo © @popantique via Instagram

On-Site vs. Off-Site Production: Does It Matter?

A better distinction, then, may be off-site versus on-site production. Most mass-manufactured goods are made overseas, far from the place of their design. Depending on your region, there may be local manufacturing options as well, but that's still outsourcing.

As well as running my line Pop Antique, I also work at Dark Garden, which is quite unusual in that the premises contain both a boutique and a large production workroom with half a dozen full- and part-time stitchers. Dark Garden is uniquely positioned between the independent/handmade crowd and mass-production. I believe it straddles that line effectively because it maintains on-site production. 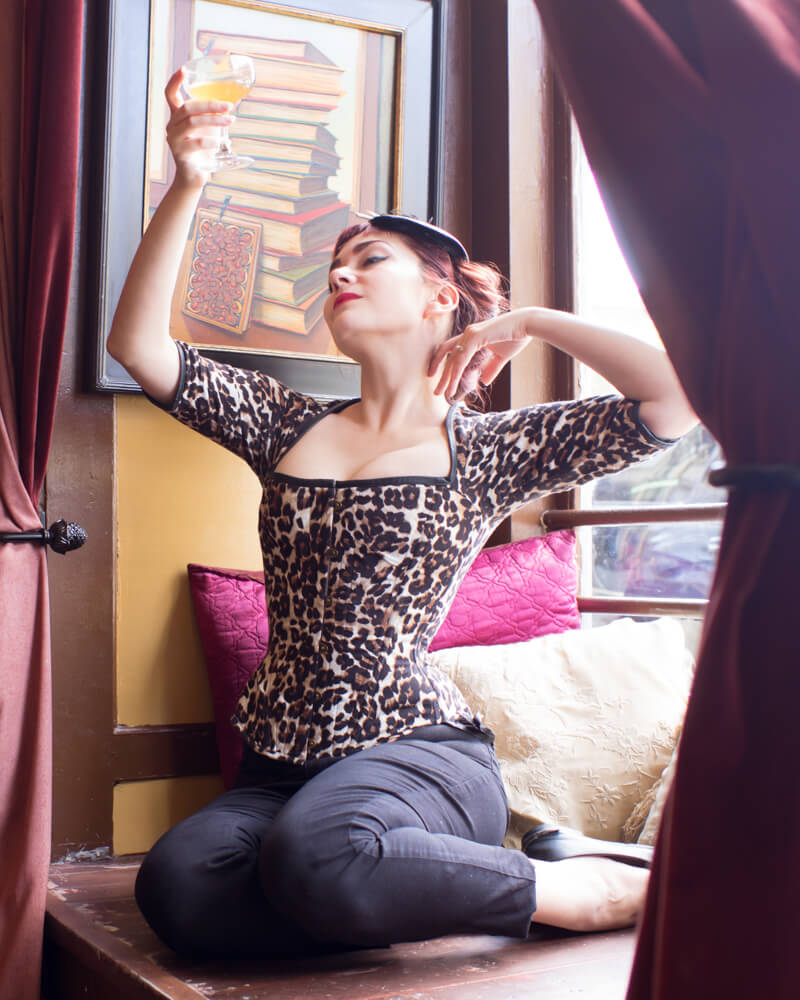 On-site production means the product designer (in this case, corsetiere) is on-hand while most of the work is being performed. If there's any question of the intended design, or the quality of a new batch of components, the communication channels are much shorter. A person who is deeply and personally invested in the quality of the product is supervising its construction. In the case of Dark Garden, our proprietress has even been known to step down on the production line in times of need. 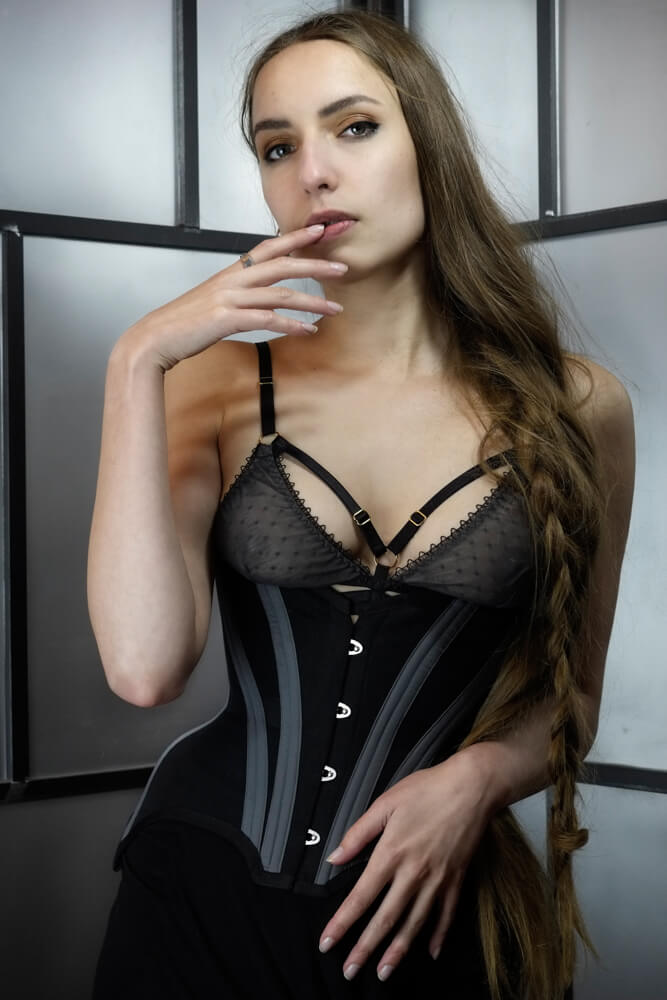 A factory worker is hired for their efficiency. Generally, they are very fast and, hopefully, sew very cleanly. A corsetmaking artisan may not be as fast as a production stitcher, but they have a deeper understanding of the process that exhibits itself with myriad tiny touches: the way a seam is clipped (to release tension/bulk), the direction in which they sew the seams, the understanding that to change any single component may require further changes to construction.

I adapt my process slightly for each corset I make for Pop Antique. For example, I have at least three different ways of constructing a single layer corset, and which one I use depends on the aesthetic and functional goals of the client. While some factories are capable of executing made-to-order work, this level of fine-tuning and attention to detail is unlikely with a production stitcher rather than a craftsperson at the helm.

Naturally, the main advantage to mass manufacturing is that it's cheaper. When you're buying 1,000 yards of fabric, you get a much better price than buying 1. And when you're making hundreds of the same corset, it's more efficient to churn them out in huge batches than one at a time.

A mass-manufactured corset may have been made with much cheaper fabric, but far more expensive industrial equipment. (As for how that affects price, the former is part of the "costing" for each individual garment; the latter is categorized as "overhead.") 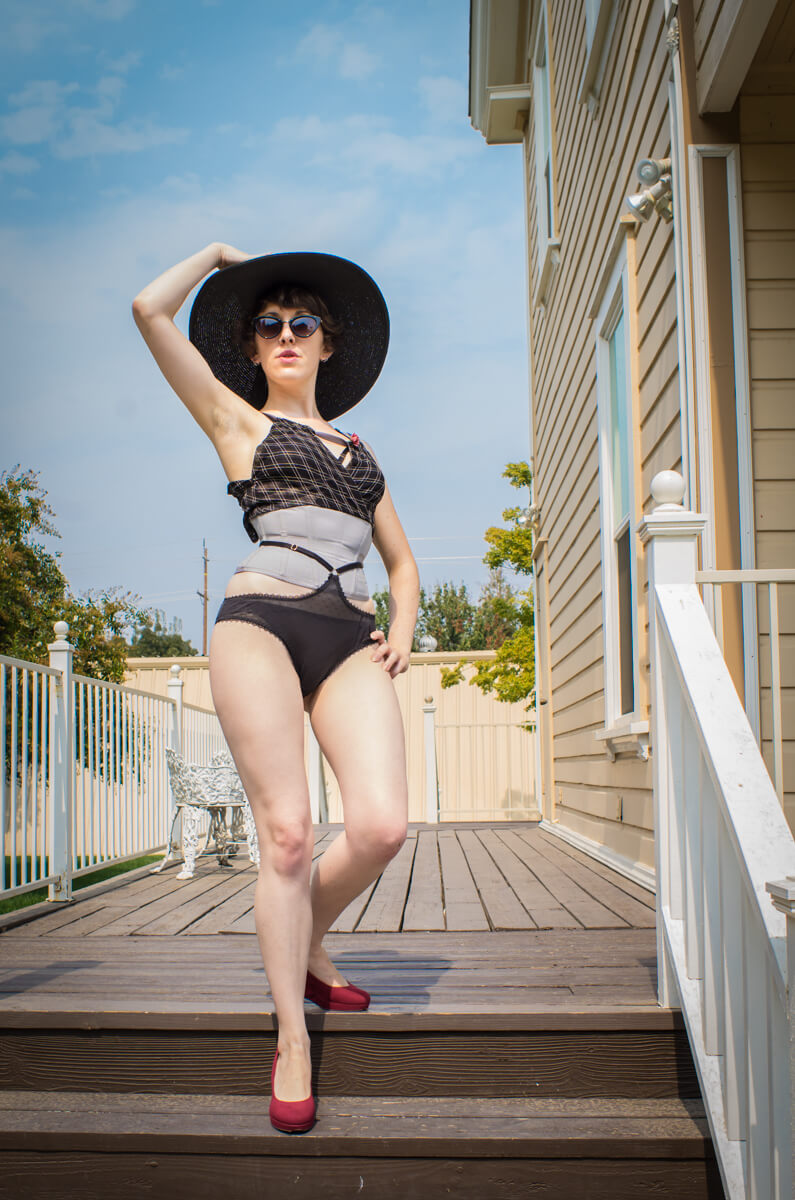 So Which is Better?

The design of a handmade corset (or any item) can be much more personalized. The aesthetic is more likely to be unique. The particulars of fit as well as appearance can be easily tailored to each client. It's independent designers who spark trends in this niche field. Indie corsetieres have the opportunity to refine their fit as well as their construction with each order, whereas large brands are far less mobile. 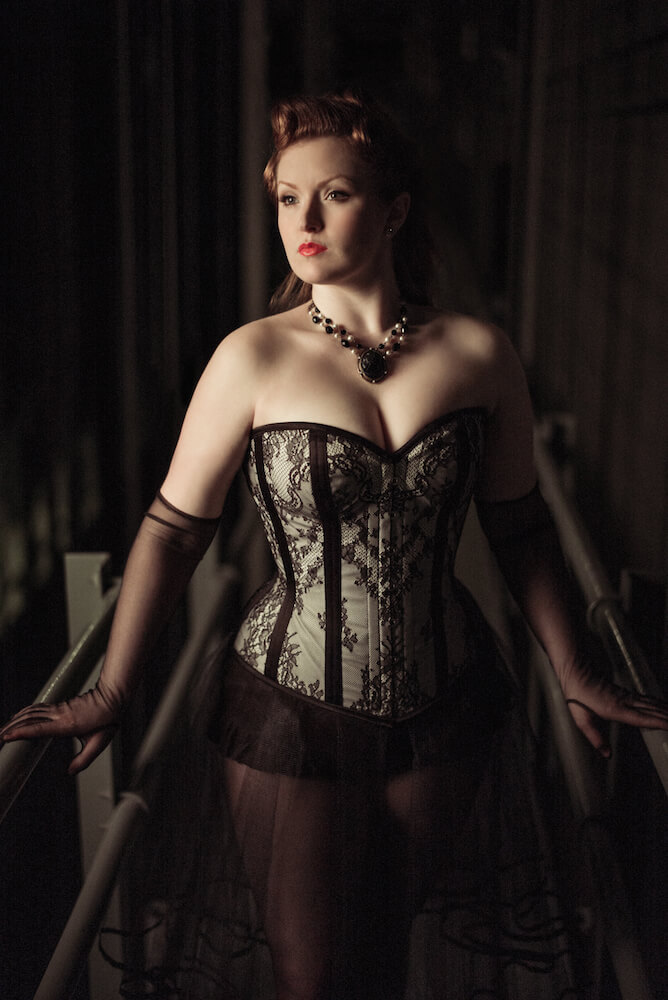 What of pure construction quality? Is a handmade corset inherently better sewn than a factory made one? That depends entirely on the corsetiere and the factories being compared. Some mass-produced brands may have much higher standards than others. Some independent corsetieres may excel at fit more so than construction, or still be working to find their ideal combination of materials.

Each brand will define their own "QC" (quality control) standards. This includes the margin of error for accuracy of the waist measurement, straightness of stitching, evenness of grommets and waist tape, etc.

Depending on the factory and their QC process, mass production could mean a result that is exceptionally uniform, or wildly inconsistent. I've had a couple friends with lingerie brands take their handmade product to factory production, and I've mostly heard of the quality errors that result. Too wide a margin of error on sizing, an inattention to finishing details, or other issues.

Similar issues tend to occur when a production stitcher is hired by a corsetiere as an assistant: half of the training is to remind them to slow down, rather than expounding upon techniques. 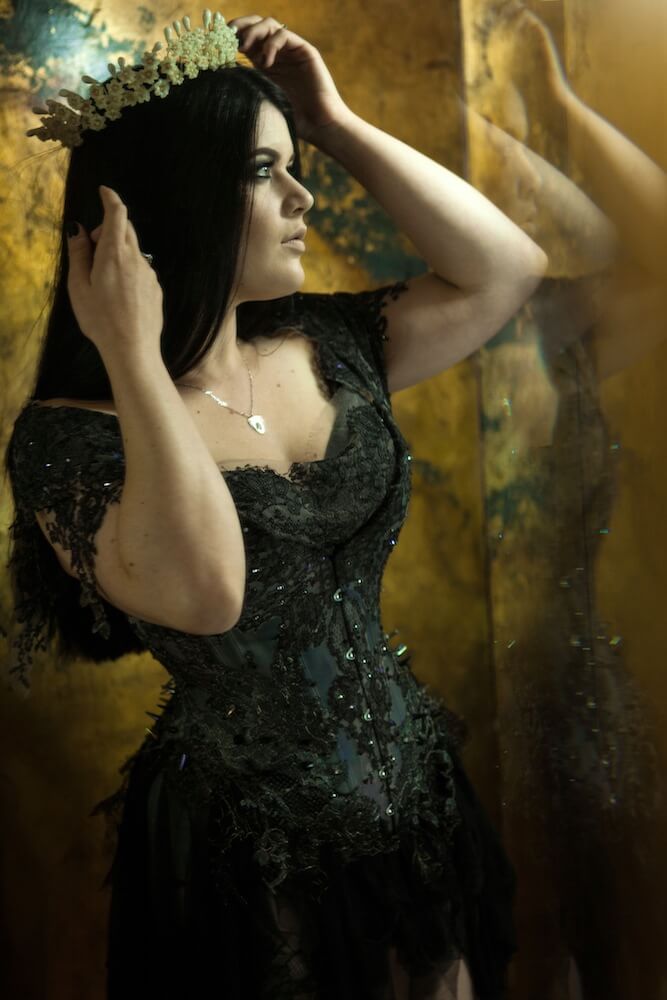 When it comes to ethics, the labor standards for overseas factories might again vary greatly. Yet despite the $300-$1,000 price tag on a handmade corset, it's still possible that an independent, one-woman corsetiere is making less than minimum wage or working far beyond eight hours a day.

Corsets are expensive because it takes a lot of work to make them. Supporting handmade corsetry is to support innovation and local craftsmanship as well as a reduced carbon footprint.

As an independent designer, I am predisposed to prefer handmade goods for their uniqueness, quality, and support of local economies. I love how personal it feels to support small businesses and artists. And yet, it's nigh upon impossible to reside in the 21st century without purchasing mass-produced goods.

If the "handmade" debate is also a question of vocabulary, the comments on this blog post have some interesting suggestions.

"Hand-crafted" alludes to the presence of a craftsperson, the engineer behind the concept, fine tuning as we go. "Seller-made"/"artist-sold" shortens the steps from design to consumer. I think these alternate terms, along with "in-house/on-site production" better represent the concept of "handmade" in a world where human hands are inevitably (and inherently) part of mass-production.

What do you think defines a handmade corset? Do you think there's another term that better defines the concept?