Lingerie for Trans Women Revisited: The Return of Chrysalis Lingerie

Lingerie for Trans Women Revisited: The Return of Chrysalis Lingerie

It looks like Chrysalis Lingerie is preparing for something. After a long absence from social media and no updates on their website, the first lingerie brand for trans women has begun to resurface. In the last few days we've seen some changes on their website (they are now accepting preorders for a stated date of May 10).

In an April 21st interview on Design Sponge, Chrysalis founder Cy Lauz said that she is "currently working on taking Chrysalis Lingerie to the next level, and with that improving on our less-than-perfect start." All of this points to something happening with Chrysalis, a company that received some serious criticism from the trans community when it launched in 2013. 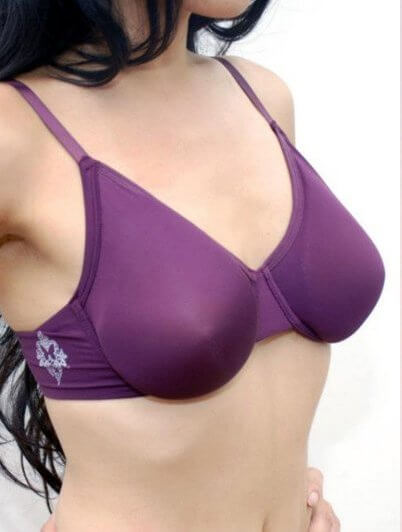 Why did Chrysalis, a company geared toward serving the trans community, receive this kind of heat? Well, a few reasons. Some of the most prominent ones are laid out well in this article on Autostraddle. To sum up: Chrysalis' price point was too high, its sizing too limited, and its response to queries on social media suggested to customers that larger, smaller busted trans women were not part of Chrysalis' desired aesthetic.

The backlash on the launch seemed to upset Lauz, who got in some online arguments and then largely vanished from social media -- which in turn created a second wave of backlash centered around her apparent inability to handle criticism.

Recently, Jeanna of Bluestockings and I were talking about Chrysalis, and I think it's worth reopening a discussion of what went wrong with the brand and why. I think as the queer community gets ready to see what the retooled Chrysalis looks like, it's worth mentioning some factors that didn't get discussed much in the first round of critique. These factors might paint a very different picture of what Chrysalis was trying to do in the first place. 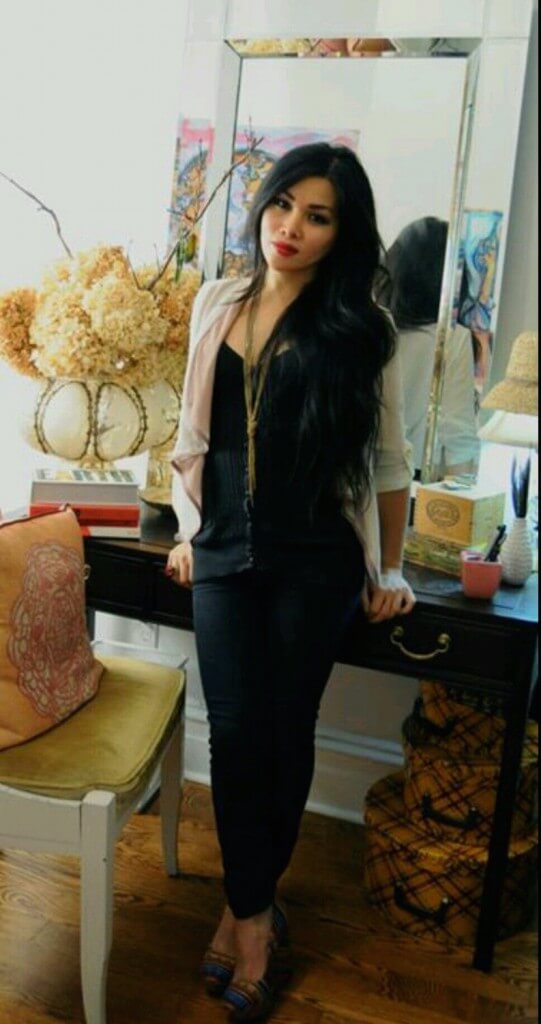 First off: a lot of the criticism of Chrysalis came from within the queer community, mostly via the original article on Autostraddle about the launch. (An article in Lingerie Talk referred to this group of critics as "haters" and the designer referenced "hate" from "trans feminists").

Their critiques center mostly around the idea that Chrysalis isn't doing enough to provide for regular women like them: women who are chubby, women with little in their bank accounts, women who don't wear thongs or silicone inserts every day. Teagan describes herself as "a pudgy trans woman with big shoulders and small breasts,” and she's comfortable with that body. She wants Chrysalis to confirm for her that the body she already has is sexy, and is enough, because that's an expressed value in modern feminist and queer communities.

Meanwhile, Cy's language reveals that she's coming from a different place entirely. In this video where she talks with co-founder Simone Tobias, both women use terms like "biological women," talk about "before I transitioned" as a clear dividing line between comfort and unhappiness, and talk about the constant discomfort of tucking (I know queer trans women who mostly don't bother, and similarly, queer trans men who mostly don't bind their chests).

Cy has not stated publicly whether they are queer or not, but she is clearly approaching trans issues without the feminist theory and queer community that a lot of younger trans people have to draw upon.

Perhaps because they don't have the same guiding ideal of "all bodies are good bodies," Chrysalis’ designs are not just meant to hide trans-ness, but also create a traditionally feminine shape on the body. Cy’s patented “T-string,” for example, is designed not just to be a tucking panty for trans women, but also to narrow the waist and make the legs appear longer.

When I was first exploring transmasculinity, I read an article about "passing" that advised me that if I created the basic masculine body shape, a lot of other, subtler cues would be overlooked by most casual observers. Cy may be using that same principle here: create an hourglass body shape on a trans woman, and she will read as female more easily, pass more easily, survive more easily. 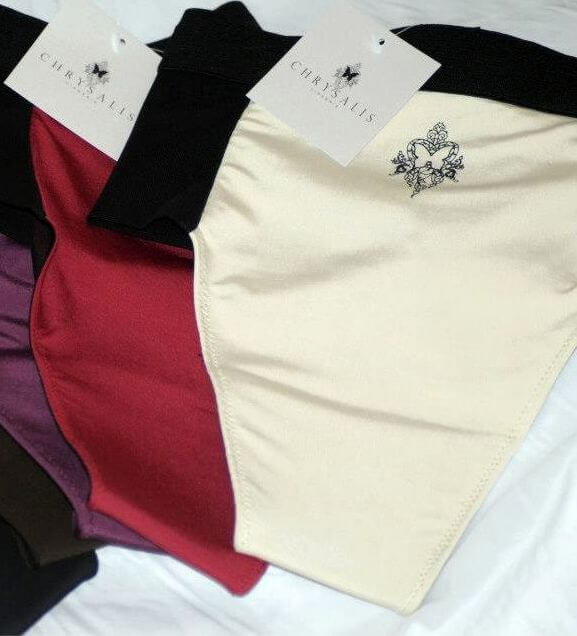 And it's important to use the word "survive" here, because Cy is not only trans but a woman of color. While white trans women still face daily struggles and threats of violence, the kind of abuse received by trans women of color is pervasive and horrific in a way that's hard to imagine if you are anyone else. Because of the intersection of transphobia and racism, trans women of color are targeted routinely for violence. This year alone, ten trans women of color have been murdered in the US. In January and February, the numbers approached one murder per week.

In a time and place where women of color are often called trans even when they're not (as an attack on their femininity), and where being a trans woman of color is a terrifying experience, Chrysalis isn’t meant to be just clothing cut for trans bodies. It’s meant to be a reprieve, a temporary alternative to surgery, a way of normalizing, a safe haven of lingerie. Their garments may seem expensive to young struggling queer folks, but they are relatively cheap compared to things like gender-confirmation surgery. 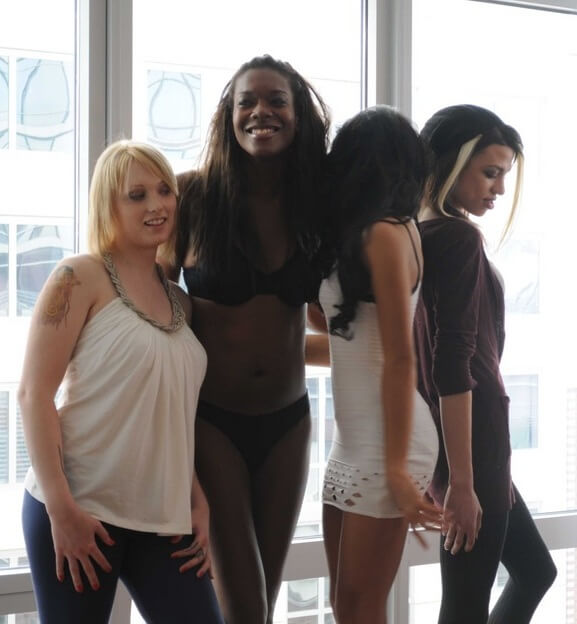 Most of the models Chrysalis used are trans women of color. Via Chrysalis.

There are plenty of valid reasons to be annoyed with the Chrysalis launch. The sizing? Too small, and confusing because they played around with the idea of vanity sizing. Their pricing? A little high for most people's daily wear.

However, it's important to remember that small lingerie brands just cannot offer the same kinds of pricing as brands like Victoria's Secret; economics of scale definitely creates a pricing gap. And further, a lot of unfair criticism was directed at their limited selection and the way their garments are designed.

The two-item selection was a starting point, and the designs were a direct effort to relieve pressures on trans women to be thinner, shapelier, prettier than cis women by letting the garments do the work. These were garments designed for high femme trans women who want an hourglass shape, which is a real and vocal demographic. 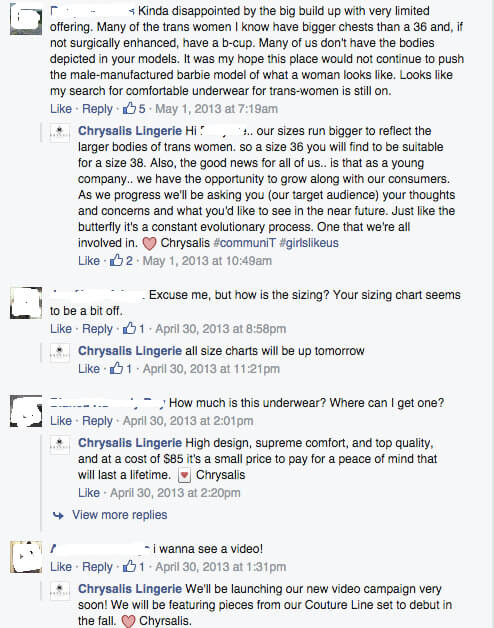 Sizing issues and a claim that their size 36 is actually more like a 38. Via Chrysalis.

I think that the queer trans community would have been less harsh on Chrysalis if Chrysalis hadn't been the only brand to emerge after years of silence. Which is terrible, but hardly the brand's fault.

Chrysalis did a soft launch, with two products they thought would get the ball rolling, and they received a deluge of criticism -- some of it valid, some of it downright insulting and cruel. Even Teagan, whom I love, engaged in some presumptuous overexplaining of how trans women of color are going to be too poor to afford these products...which seems like an odd thing to tell a trans WOC entrepreneur.

If Chrysalis does put together a relaunch, I hope that the queer trans community will offer constructive criticism as needed, but will keep in mind that a trans woman of color launching a lingerie line is in a very vulnerable position.

Cy is caught between white queer trans folks on the left and a transphobic world on the right. In her recent interview she talks about internalizing a lot of the criticism levied against her and lashing out, but how she feels much more prepared to get back into business and also cut herself some slack. It would be great if what she took away from her interactions with queer trans people is that it's okay to be imperfect.

As she relaunches, I hope people will keep in mind that Cy Lauz is a trans lady entrepreneur who is trying to listen to her customers and trying to help, and that she may need a little more patience.

Do you want a Chrysalis relaunch? Are you skeptical? Talk to me in the comments!