When Body Snark Becomes Even Uglier: The Problem with Calling People 'Tr*nny'

Editor's Note: Autostraddle published a call and response piece to this with one of their columnists, Mey, who is a trans woman. Please click the link to visit their site and get her perspective. 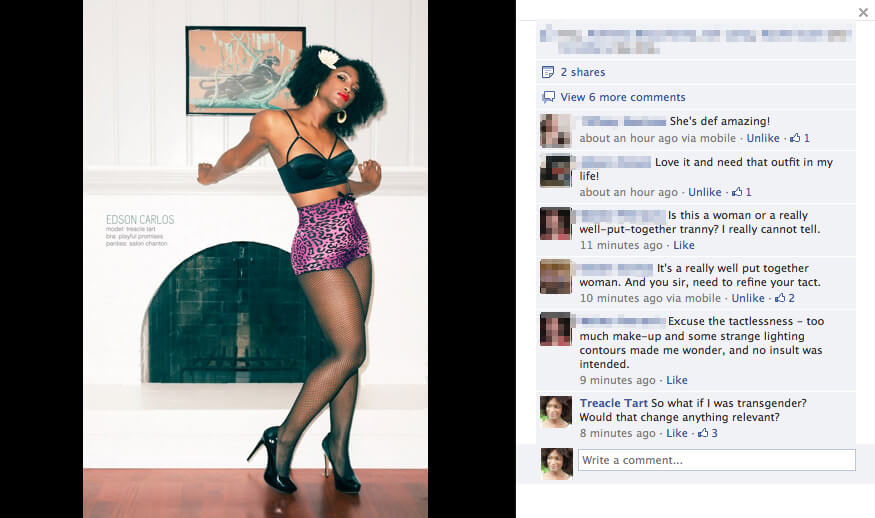 The impetus for today's article.

Whether it's your first time here or you've been a reader for years, I firmly believe that talking about lingerie doesn't mean just talking about bras and panties. Lingerie is also an excellent lens to talk about other, important things happening in our world. Very often, these other conversations center around topics like body image or self esteem or beauty standards, and I very much see today's blog post as a continuation of those discussions.

In the conversation on beauty standards within the lingerie industry, especially as related to body shape and size, there are usually only two sides represented: thinner women and thicker women. But women don't just come in two sizes or or two shapes or two body types, and all the body celebration talk can start to feel a little exclusionary if you have a build that's neither thin or thick. And as I was thinking about some of the unique issues muscular women deal with in the lingerie and fashion industries, I also began to think about some of the related (but by no means identical) issues transgender women face in the same spaces. And all this stuff has been percolating in my mind for the last few months, until I finally felt like I had to talk about it.

In the previous paragraph, I mentioned transgender women. I am not a trans woman. The gender I was assigned at birth and the gender people see me as is also the one I personally identify with (which means I'm cisgender). I'm aware that puts me in a privileged position, so I want to be clear that I'm not speaking for or on behalf of anyone. This is specifically an article about my personal experience with the word. However, I understand how difficult and delicate talking about these topics can be, and I hope this article serves as a spark for conversation within the comments section or even a guest post from someone within the transgender community. I've also tried to be as aware and careful as possible in the language I'm using (which does include some offensive/potentially triggering words), but if I've made a misstep, please do tell me. And of course it goes without saying that transphobic and/or homophobic remarks, of any kind, will not be tolerated here. 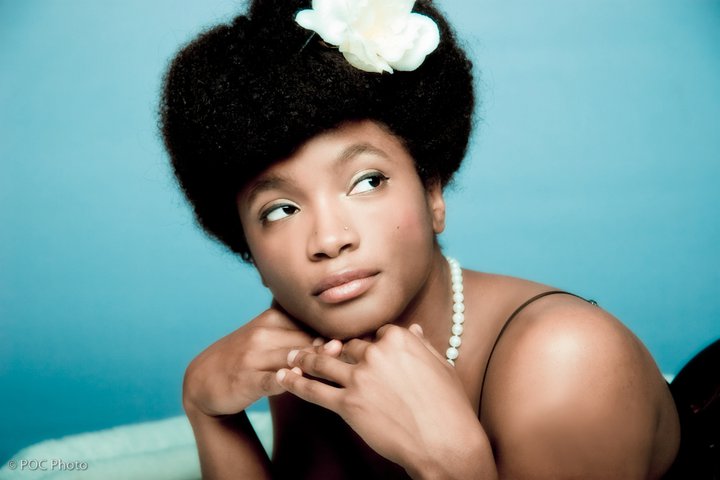 The first photo that elicited the slur. By POC Photo.

As many of you know, there are lots of photos of me online, usually in the pinup style. I have pretty stable self-esteem, so I'm not terribly bothered when people call me ugly or what have you. If I'm not your cuppa, great. But about a year ago, as TLA was starting to get a lot bigger, I noticed the beginnings of a strange new pattern. People started calling me a "tr*nny" in the comments of some my photos. Even now, as I'm typing this, my brows kind of furrow into a confused expression.

It's not that I'm offended and appalled anyone would think I'm transgender (because, obviously, there's nothing wrong with being a trans woman. They're, you know, women.), it's just that I'm a bit taken aback people would attempt to use gender as an insult. 1) How is being a woman, trans or otherwise, a bad thing? 2) Why in the world are you using slurs?

But as it happened more and more (never what I'd call "frequently," but often enough to take notice) and as The Lingerie Addict established itself as an anti-bullying environment, that whole thing got me thinking about body snark. One of the most offensive aspects of body snark is that it's used to delegitimize women (as the popular phrase like "real women have curves" makes clear). Suddenly, instead of just being a woman, full stop, there are degrees of 'real' womanhood to aspire to. And if you don't make the cut, then I suppose you're a fake woman or a false woman. Which is just weird. And silly. And wrong. 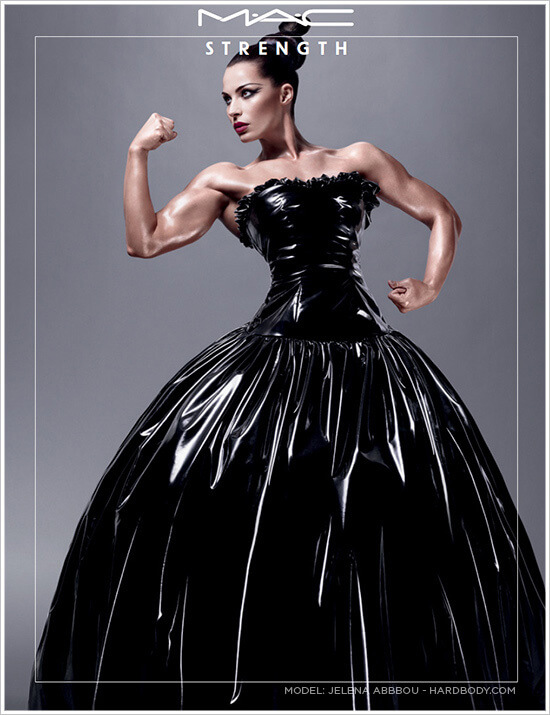 The MAC ad Samantha refers to in her piece.

As I mentioned early on, the conversation on body snark is very often limited to just thin and thick women (the "skinny vs. curvy" debate) as though women come in only those two body types and no more. That makes women with my kind of build (muscular/athletic), feel like the 'odd chick out' because it's not only alienating, it also makes us invisible... which makes insulting us easier. And as highlighted in a Blisstree article by Samantha Escobar last year, muscular women face a very specific kind of body snarking, described in detail in the excerpt below:

"We all know that our society often fat shames people they deem overweight and sometimes body shame those declared too thin, but many men and women consider very muscular women to be “gross” or “unappealing.” I find this strange, since — while I don’t remotely condone it — fat and thin shamers tend to at least cite health as a typical reason for being assholes. When it comes to insulting muscular females, this logic makes no sense; typically, those women work out frequently and eat incredibly well in order to achieve the bodies they have. Why insult them?

Well, it goes back to that “balance” thing regarding our bodies. We’re “allowed” to be strong and toned, but give us some solid definition, and bam — suddenly females are not “feminine” enough anymore. They’re constantly accused of doing steroids or being men, which is both absurd and insulting. On television, ultra-muscular women are typically cast as transgender (which is by no means a negative identity, but most muscular women were not born men; plus, television tends to insult the transgender community through most of these plot lines, as well)." 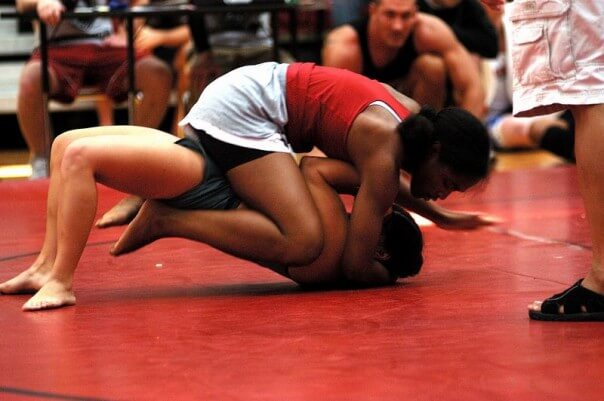 I definitely empathize with this Catch-22. In my past, pre-Lingerie Addict life, I was an avid martial artist, runner, and weight lifter. My particular body type allows me to build a lot of muscle very easily, and that also means I appear muscular and 'in-shape' with very little effort. I'm asked at least twice a week about my 'killer arm routine' when the honest truth is... I don't have one. And I've had some very awkward conversations with guys saying they couldn't date me because I was "too strong" and they were worried I'd "beat them up," (as an aside, needing to have a partner who's physically weaker than you is very interesting to me... but that's a subject for another time).

What's even more distressing is how often these claims of being "overly masculine" or "inappropriately muscular," are also linked to race. While prepping this article, I spoke with a couple of models I know who are also black women, and they revealed that the "you look like a man" remark was unusually common for them as well... at least far more common than it was for white models they knew. Even when looking at remarks that other models of African descent have received, there's a disproportionate amount of commentary on how they look "less" feminine... because beauty standards are not only built upon size, they're also linked to ethnicity.

It's like people are so confused/threatened when you don't fit the current feminine ideal, it becomes open season on questioning your gender. It is, in effect, saying, "Your body is so unattractive to me that I have decided you don't even count as a woman anymore. You are a fake woman. You are incorrect. And you need to conform." Rest assured, it's body snark, taken to a very ugly extreme. But that's not the worst part of all this. My experiences with obnoxious gender policing aside, being called a "tr*nny" has made me think even more about how marginalized trans women are in this space. 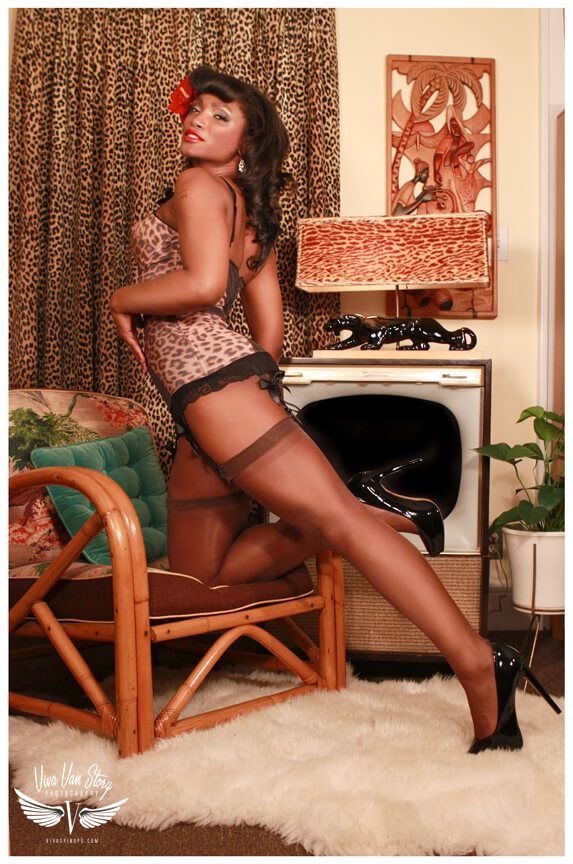 When someone calls me that, whether they're attempting to be insulting or not, I'm able to say "no" and move along with my day, confident in the knowledge that the conversation is over. But I have to wonder... if I really were trans and said "yes," what would happen? And it's not a pleasant question to think about when you consider the extreme and horrifying violence trans people (specifically trans women, and, even more specifically, trans women of color), face in our society.

If I were an out and publicly visible trans woman, would people feel like they had the right to be awful towards to me? To insult me or harrass me or encourage violence against me? The responses to my pictures as a cis woman seem to indicate "yes." And while these particular outcomes are more or less a thought experiment for me in this context, they are very real concerns for trans people. I can't imagine what it must be like to constantly fear that people will turn against you and want to hurt you, even murder you, over circumstances you literally have no control over. This goes beyond simple body shaming; these slurs are a reinforcement of a dangerous social paradigm - that the lives and bodies of transgender women are less valuable than the lives and bodies of non-trans women.

And the third. This time, I took a screenshot of the comment.

At the heart of things lies the principle that someone's gender (and genitals) is their own personal business. If you're not sleeping with that individual, whatever's happening with their body has nothing to do with you. And asking if someone is trans is not the kind of thing you casually inquire about via a poorly-worded Facebook comment. Not all women are "thin" or "curvy." Not all women are glamorous and feminine and svelte. Some of us are broad, muscular, powerful, athletic types. And having your gender identity questioned for a failure to conform is violence.

If you still feel the need to ask someone if they're trans or not, first ask yourself why. Why is it your business? Why do you need to know? Why do you care? And if knowing the answer would change anything you think about this person, question your internalized transphobia. Finally, just avoid the word "tr*nny," altogther (along with its analogues "s***ale," "he/she," and "it"). Those are slurs and insults, and they have no place in the 21st century. Gender is more than your body shape. Gender is more than your genitals. And someone's gender identity should never be used to shame, insult, humiliate, or harrass them. So let's stop all that.

I know I've talked about a LOT of stuff in this article, so it's definitely time for some conversation. What do you think about the snark against women with "unfeminine" body types? How do you feel when someone uses the words mentioned above as an insult? Do you think the lingerie community could do better being welcoming to trans women? And have you ever personally encountered any of the things I'm talking about here? I'm looking forward to chatting in the comments.