Disclosure: I have been a speaker at the Oxford Conference of Corsetry since its inception last year. I am also an employee at Dark Garden Unique Corsetry, whose proprietress, Autumn Adamme, was our keynote speaker this year. All opinions are my own and were not solicited by the parties discussed. 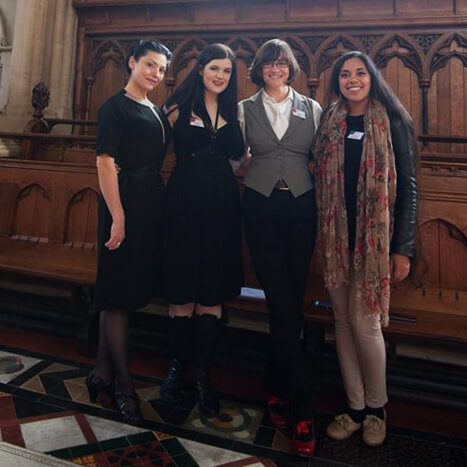 
The Oxford Conference of Corsetry is an annual event for corset makers in -- where else? -- Oxford, England. This is the second year of the conference and the excitement, and headcount, have grown. With tighter scheduling and even more workshops, there was still plenty of time for networking throughout the weekend. We were graced with three amazing special guests who contributed their expertise with insights regarding construction, history, and business: Cathy Hay, Ian Frazer Wallace, and corsetry legend (A.K.A. my boss), Autumn Adamme of Dark Garden Unique Corsetry. 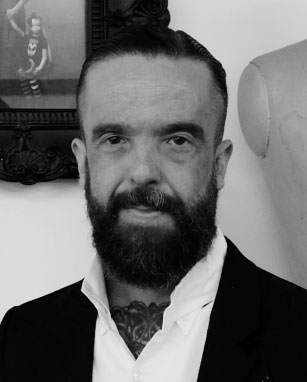 Ian Frazer Wallace, now of The Whitechapel Workhouse, was our keynote speaker last year and his speech then was incredibly inspiring, discussing his personal journey as a corset maker and vision for modern corsetry. The latter resonated strongly with me and inspired me to pursue more concepts of what I call "integrated corsetry," wherein corsets are camouflaged as or incorporated into other garments. This year his model was clad in a gorgeous Chanel inspired corset, skirt, and bolero ensemble: a collaboration with OCOC headmistress Julia Bremble. Last year's outfit, which had adorned Polly Fey, was displayed on a mannequin in our workshop room, though the 16" waist a bit too much of a squeeze even for such a shapely display model. On Sunday, he could be found in the JCR, talking with any who came up to him and demonstrating some of the couture sewing techniques he uses when creating corsets for London fashion week designers. 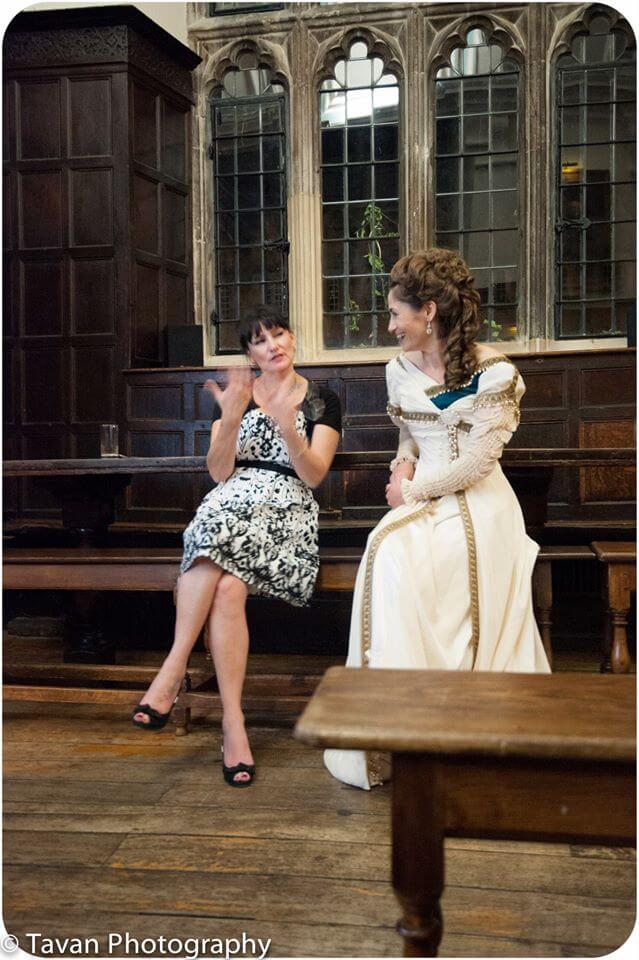 Cathy Hay is well known to corset makers as the visionary behind Foundations Revealed, a subscription-based how-to website for the creation of period undergarments. Naturally, there is quite the focus on corsetry! Of the OCOC team, known amongst ourselves as the Corset Fellows, three of us are regular contributors to Foundations Revealed (myself included). Foundations was also one of our wonderful sponsors for OCOC this year, supplying us with lovely branded tote bags. Cathy's workshop/discussion on Sunday was about business and life goals, sparking much thought from attendees. Soon all were drawn in, listening in and participating in the discussion. Even Autumn hovered around the door to the crowded room and offered advice and a couple of book suggestions for the avidly listening room of entrepreneurs. The workshop was open to all skill and business levels, from hobbyists to those who make corsets full time. Cathy looked quite dapper in androgynous menswear-inspired looks during the day, but made quite an entrance with her incredible gown and curled wig at Saturday's drinks reception and formal dinner. 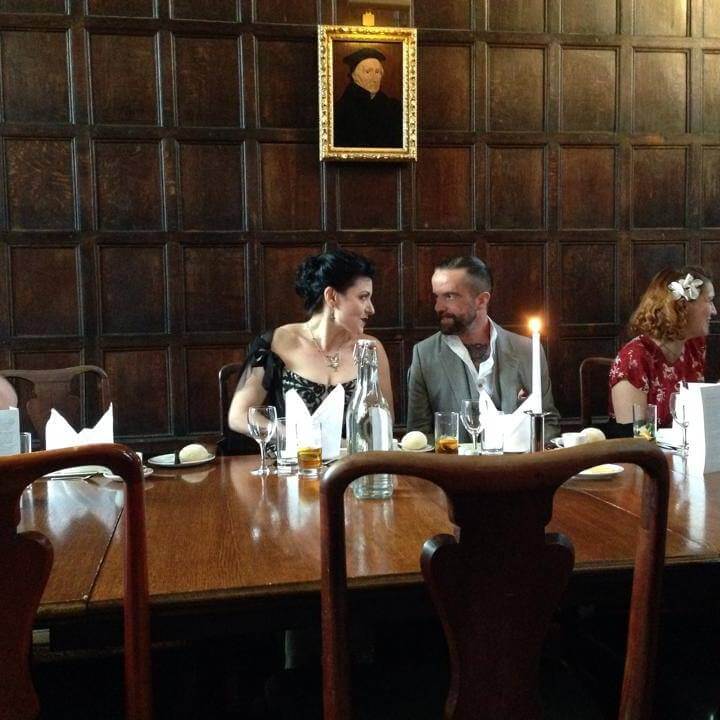 Dark Garden's Autumn Adamme was the one who wowed me the most, which is only appropriate for our keynote speaker! Yes, Autumn is my boss, but day to day she doesn't really talk about how she was on the forefront of the modern corsetry revolution. I actually had very little idea of the level of prestige of Dark Garden until she and I both attended the same corset museum trip three years ago. Autumn's speech was incredibly in-depth, detailing her inspiration, company history/history of modern corsetry, elements of the production process and so forth. These are the kinds of insights that one can't get outside of an event like OCOC -- and as it stands, OCOC is a quite singular event! Certain techniques that we regard as completely standard were pioneered by Dark Garden in its early years. In an age before the commoditization of internet, corset makers such as Dark Garden, Velda Lauder, and Bizarre Designs were facing similar challenges and independently working through to solutions. As such, it's hard to say who "invented" such things, but the fact remains that Dark Garden was on the leading edge of a few touchstone innovations. 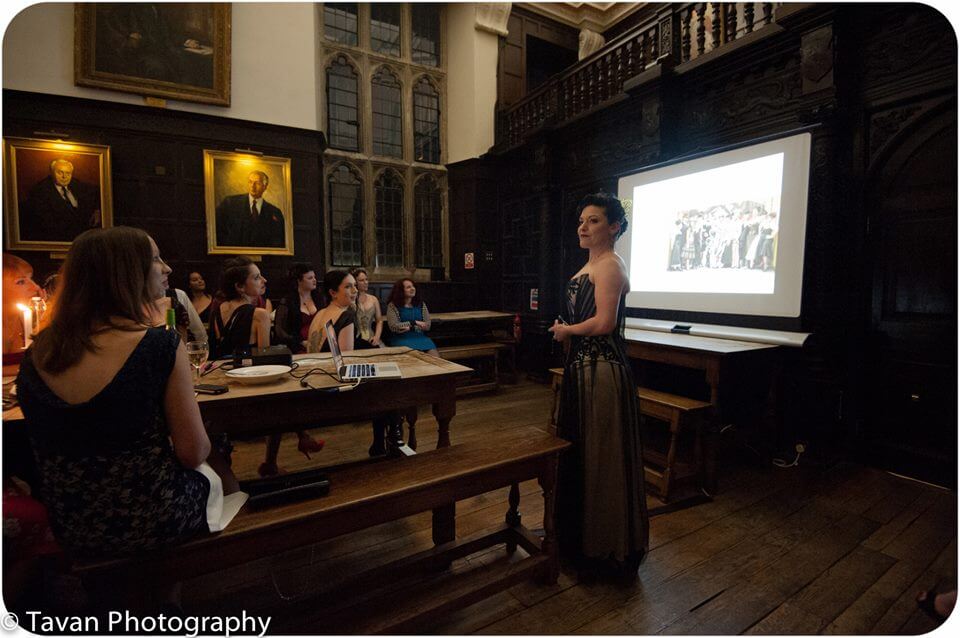 Autumn Adamme in the midst of her keynote speech. Photo © Laurie Tavan

Notably, there were three things in particular that have had an enormous impact on modern corsetry that I had no idea started with Dark Garden. First, there is a particular construction technique that is currently so widespread "that [we] all talk about as if it's nothing" but it is so ideally suited to corsetry that's it's hard to manage corset makers ever did without it. As someone who made her first corset less than ten years ago, I had the benefit of a variety of online tutorials, including the then-thriving LiveJournal community, providing me with such construction touchstones, as did most contemporary corset makers, but Autumn had to work through the concept from scratch. 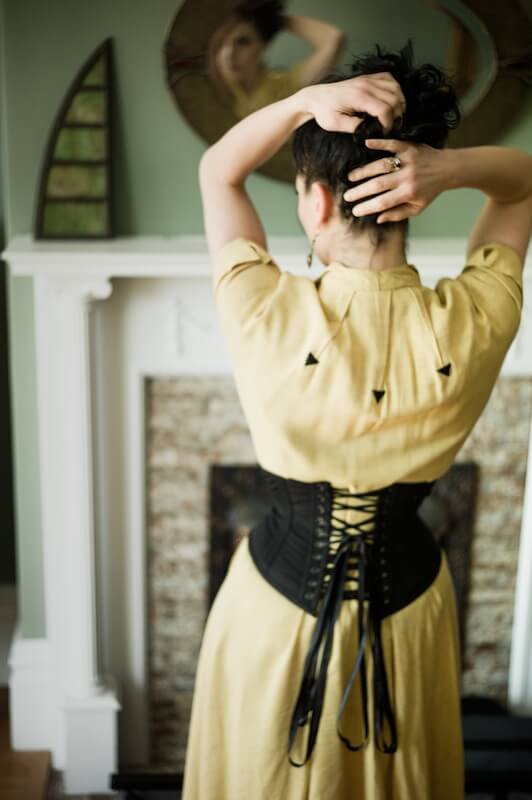 Secondly, the crossed waist-loop lacing style -- which is pretty much the most important part of lacing a modern corset -- also was an early Dark Garden standard. (This lacing technique has many names, such as inversion lacing, inverse bunny, reverse bunny, double bunny, etc.) Autumn was frustrated by the bulge of skin created by the gap where the waist loops laced, and thought it odd that the area under most tension would have the least support from the lacing. Though I've parroted the patter about the crossed loops to clients innumerable times, at no point was I told that Dark Garden arrived at this conclusion on its own well before it became standard practice!  Dark Garden was also amongst the first to begin using sleek satin ribbon to lace their corsets, although there's still a camp that prefers the additional friction of shoelace style lacing. 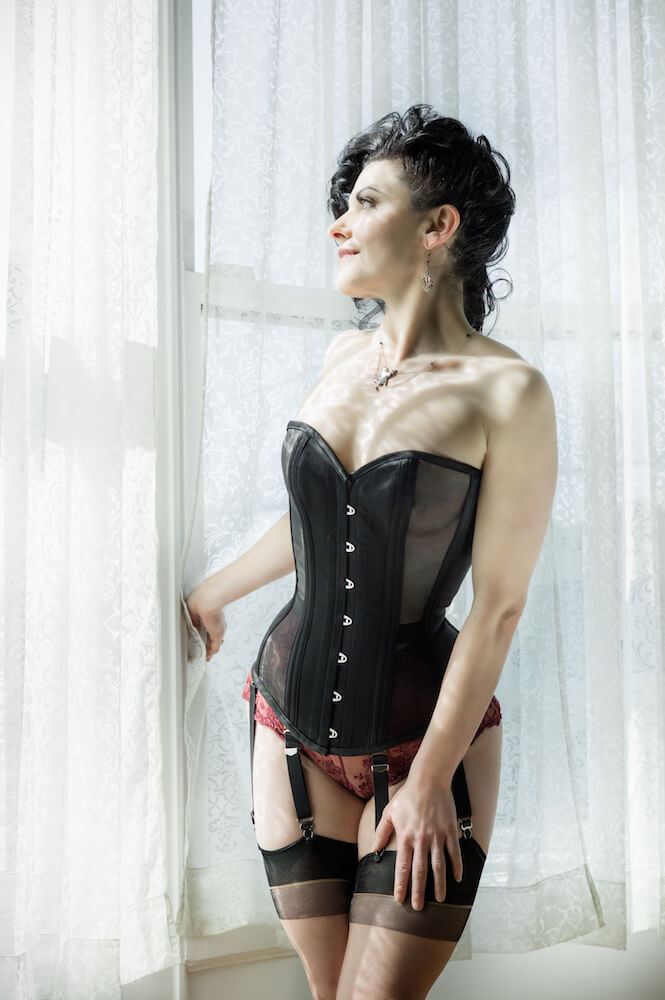 Lastly, as we all know, sheer construction is a huge trend for modern corsets. Though I remember when the custom sheer "Adelaide" was first officially added to the Dark Garden line sheet, alongside its ready-to-wear sibling, the Risqué line, Autumn actually made her first sheer corset way back in 2000. One thing I love about sheer corsets is the lighter construction and increased mobility; when I started making corsets, the usual thought was to reinforce with layer upon layer of coutil, which doesn't suit my style at all. Sheer corsetry has been huge because it's helped corset makers see that they can winnow down and soften the construction and still have a very functional, beautiful, sturdy, and curvaceous corset.

Regarding the main workshops, this year we took attendees from start to finish through the corset making process. In the morning, Alison Campbell of Crikey Aphrodite hosted an interactive workshop on inspiration and mood boards, and Julia Bremble of Sew Curvy/Clessidra Couture discussed standard sizing and the creation of a "block," which is the basic pattern from which other styles are derived. After lunch, I picked up where Julia left off, going into more depth with standard sizing (including how I arrived at my sizing for Pop Antique) and grading patterns across a size run. Sparklewren's Jenni Hampshire revealed the fascinating and "bonkers" process behind her signature Bird's Wing corsets, and Morúa Designs' Gerry Quintón wrapped with another hands-on workshop on embellishment. Each of us made a corset inspired by our venue, Jesus College, which also related to our workshop topic. 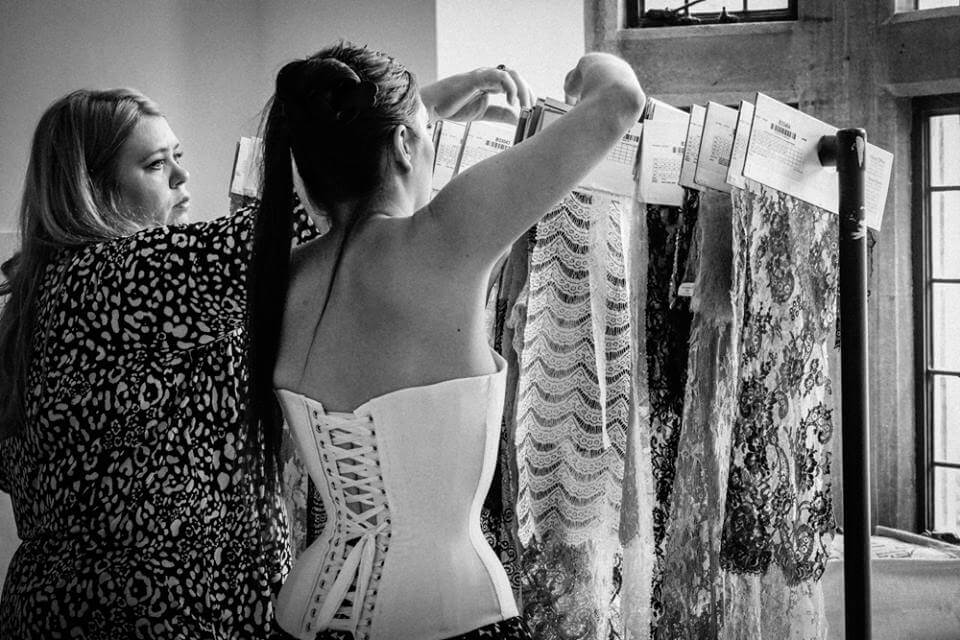 "Corset Fellows" of the Oxford Conference of Corsetry: Alison Campbell and Marianne Faulkner (me) sorting lace samples. Via the OCOC Facebook page.

All told, it was another very full year with something for everyone. Our special guests really helped take this year's OCOC to a new level, and we look forward to continuing the trend next year.  Discussions for Oxford Conference of Corsetry 2015 are underway, but you'll have to hang tight until about October for any official news on that front!  Keep an eye on the OCOC Facebook page as well as the blog.