By Cora Harrington May 12, 2014 in featured, video, vintage 9 comments
Share this article 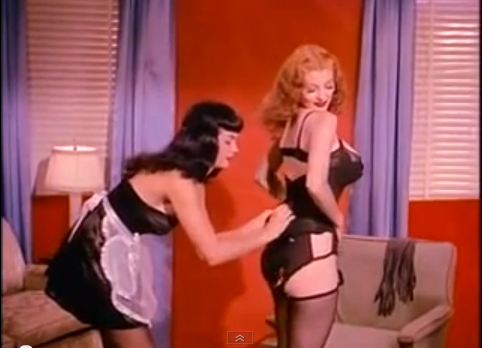 Here at TLA, we love vintage lingerie. Vintage-inspired, authentic vintage, vintage catalogs... taking a past look at women's undergarments is interesting not only from a fashion perspective, but also from a social or cultural one. You can tell a lot about people and the times they lived in based on what they wore, and lingerie is no different. While there aren't as many vintage lingerie videos as there are for, say, "regular" fashion, I thought these 12 were definitely worth a look. They range in time from the 1920s through the 1960s. What do you think of this look back into the fashion past?

We'll start things off with a catchy tune courtesy of Ernst Lubitsch's 1931 film, The Smiling Lieutenant. Women in the 1920s and 30s were trading their long underwear and petticoats for scandalous tap pants and chemises. And I adore how saucy Claudette Colbert is in this pre-code Hollywood film. Towards the end, around the 2:00-minute mark, the old-style bloomers and nightgown are tossed aside for more modern intimate apparel. I have to admit, I've been humming the chorus for most of the day. A "silken symphony" indeed.

Now we'll backtrack just a little to 1929. This is a silent movie and starts off with an amazing, amazing robe (click here for more gorgeous 1920s lingerie). Other highlights for me include the 'petal' tap pants and bandeau bralette (fast forward to about 1:38 to see; the designer She & Reverie makes items reminiscent of this look now). The short film ends with a new invention (for 1929), the camiknickers... a precursor to more contemporary teddies, bodysuits, and rompers.

Time for a swim break! The commentary on this video is so incredibly bizarre; it's worth listening to, just very obviously from a different place and time. I actually adore fuller cut swimsuits like this, but I also think the strappy back details are surprisingly modern. A lot of swimwear and lingerie brands today are reincorporating that look into their garments, which shows that trends really do just recycle over time.

The "peeping tom" framing device for this video is genuinely pretty creepy/weird, but around the 3:00-minute mark, the fashion part starts. What's so strange about this video is that these women are presumably alone yet still expected to undress in an alluring manner, and the connection between being fuller-figured and lacking in "feminine wiles" couldn't get more obvious. As a cultural artifact, this movie is very interesting. And for lingerie lovers, it's a way of seeing how those all those museum undergarments really looked on the female body.

Christian Dior's famous 'New Look' required the sort of structured underpinnings that hadn't been seen since The Edwardian Era. This is my second favorite video from this article. I would totally wear that corset today, though perhaps the extra shoulder and hip padding is a bit much (though it did remind me of 80s fashion!).

Slips have more or less fallen out of fashion, but they used to be a vital part of every woman's wardrobe. A descendant of the petticoat, slips helped to protect dresses and skirts from sweat. Slips also helped to ensure that clothing 'lay' properly, and didn't accidentally reveal the wearer's body (particularly important in the case of sheer or see-through garments). This collection of wedding day slips shows that bridal lingerie has been a "thing" for a very long time.

This short little film shows what everyday lingerie looked like in the 1940s. Girdles and stockings were customary (pantyhose didn't become popular until the 1960s), and bras were still fairly simple and unstructured (underwires, push-ups, and bullet bras didn't take off until the 1950s). Also, most lingerie was still white or cream in color (and sometimes blush, tea rose, or robin's egg blue). Prints, patterns, and the ultimate in scandal --- black lingerie --- didn't reach widespread availability and acceptance until the 1950s and 60s.

One of the few vintage lingerie fashion show clips I could find on YouTube, this blurry film is still worth a look. The full nightgown around the :20 mark is my favorite garment.

Another quick peek at a vintage fashion show, the relevant parts of this video are only in the first :55 seconds or so. See you if you can spot the differences between the adult and teenage girdles!

Clip #4 was my second favorite video, but this one is my most favorite. I highly recommend blocking out an hour or so of your day and watching the entire Teaserama movie. It's a cultural treasure full of vintage lingerie, vintage burlesque, and some awesome vintage hair and makeup. If you only have time to watch one scene right now though, make it the reverse striptease with both Bettie Page and Tempest Storm, starting around the 6:00-minute mark. It's a classic scene.

Before Victoria's Secret, Frederick's of Hollywood was the name in lingerie. The founder, Frederick Mellinger, is famous for inventing the push-up bra, and his company became infamous for popularizing both black lingerie and "sexy" lingerie (think cupless bras, open crotch panties, etc.). They were also innovators in lingerie marketing with their expansive and beautifully illustrated mailed catalogs. Fast forward to 1:30 to see their very literal take on the "open bottom" girdle.

It's the last vintage video (but don't go away because there's one more video you'll want to see below)! Originally, I was only going to have 11 videos in this list, but when I ran across this absurdly surreal Salvador Dali swimsuit fashion show, I had to include it. It's only 50 seconds long, but features stunners like eyeball bikinis and swimsuits with attached inflatable baseball players (at least, I think that's what that is).

The Feline Feeling from The Loved One:

The very last video isn't vintage at all. It was released just a couple of months ago, but it's so much fun and so obviously vintage-inspired, that it's an honorary #13 on this list. And unlike the other videos in this blog post, you can actually buy some of the lingerie featured in this short film directly from The Loved One. It's the best of both worlds!