Gay, Broke, and Glamorous: Queer Lingerie for under $50

Like a lot of young queer folks in this recession, I can't always buy the lingerie I want. And I sometimes worry about the perils of recommending lingerie to queer people without taking into account the fact that a lot of you all are on a shoestring right now. Why encourage queer people to spend money on lingerie?

I used to be really resistant to lingerie myself. In college I remember looking at the ratty underwear I had left over from high school and deciding to just never wear underwear again. This worked for a little while, until one day I was walking home from class in a skirt and a stiff breeze caused me to moon the whole block. Still, I balked. I barely had money to spend on clothes, but I desperately needed to buy things that would make me "look queer enough" to attract The Ladies. Why blow my precious dollars on something no one would ever see? (I also wasn’t much of an optimist about the ladies thing).

On the other side of this turmoil, and as a lingerie convert, I have a few reasons why you should buy some underwear you like, even if you're broke. First: it’ll change how your clothes fit. Stretched-out or too-small underthings don’t do you justice. Second: it takes a weight off of your mind to have underwear that works with you. Worn-out or crappily-made underwear will ride up, sag, and generally make itself a nuisance. Finally: if you’re wearing underthings that affirm your gender identity and your personal aesthetic, you’ll just... feel better. What you wear, especially what you ear closest to your skin, often informs how cared for you feel.

Obviously, if you’re young and queer and broke, a lot of brands are going to be unattainable for regular wear, and it's not always the brand's fault, either. So I’ve compiled a list of some of the best places I’ve bought lingerie in the last several years: places that routinely sell the things I want for under $50, and sometimes for even less. I realize that even with this cap, some of these prices are going to be a bit high. I know, I feel it. But if you can swing $25 or $50 to treat yourself, here's where you'll get the most bang for your lingerie buck. 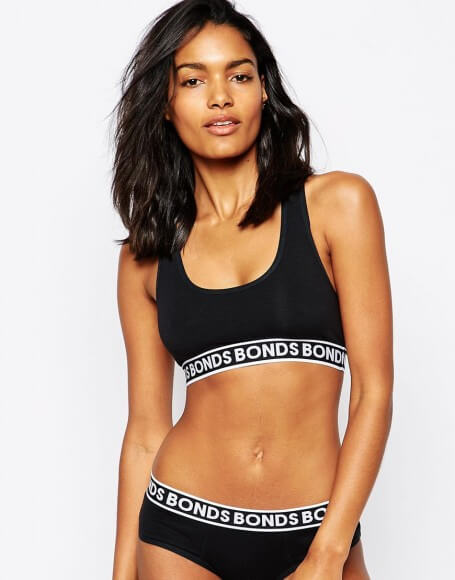 ASOS.com is a massive and intimidating website to navigate; it’s basically a fashion warehouse. Luckily it’s a well-lit warehouse, but it’s easy to get overwhelmed, especially if like many queer and trans people you suffer from anxiety. I recommend searching only one department at a time (the lingerie department, for example). Play with the price range and color options to narrow your search even more and reduce fatigue. On ASOS I can usually find novelty stockings, some socks, men’s boxers and briefs, and bras and bralettes. I got a longline bondage-inspired bra on ASOS for $15 once and wore it to death. They also carry some fuller bust lingerie in similar styles to their standard sizes. 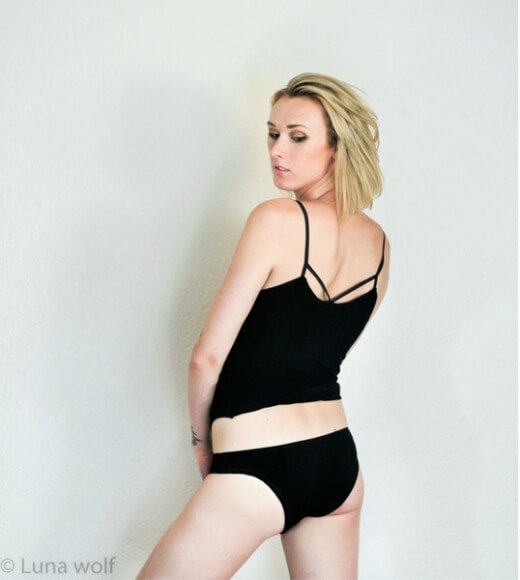 Indie lingerie is often a great place to get pieces that are more androgynous than overtly feminine. Often you can find panties under $50 on indie sites, but bras may cost a bit more than that. I feel a little bad recommending this, because a lot of these sites are ones I want you to go out and support --- like Between the Sheets and Bluestockings. But if you can’t afford their offerings at the regular price, scour the sale sections and see what’s to be had. Bluestockings just wrapped up a big series of sales and has a few items left. Also, I got this really great Feather Bodysuit from BTS on sale for $36. Oh look, you can still get it! 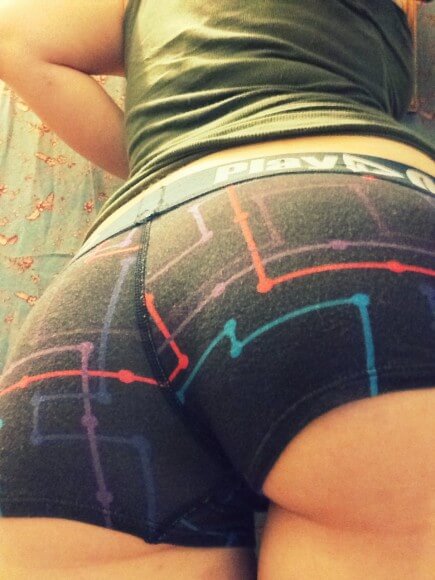 Play Out Boxer Briefs, $24.00. My butt modeling them: priceless.

I’m putting the pair of these stores together because they both deliberately cater to queer women and transmasculine folks and they both make boxer briefs in the $25 ish price range. If you want a pair of underwear that will not quit on you, either of these brands is solid; I've test-driven both TomboyX's boxer brief and Play Out's. They’re definitely geared toward the masculine of center as a general rule, but I could see some femme babes looking really cute in these too. There are a few more brands that have a more femme take on the same idea, such as Girls Will Be Boys and Foxers. 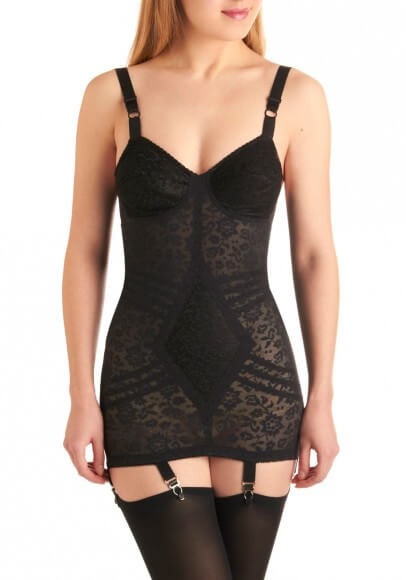 If you’re femme and have the Internet, chances are good that you’ve been on Modcloth. Their lingerie section is small, but they have some cool vintage pinup-y pieces for under $50, like the shapewear shown above. Since Modcloth sells a lot of different brands under its aesthetic umbrella, sometimes you can trace the product by checking the name of the designer. It’s worth checking to see if another site, like Herroom.com, has the same thing for less. 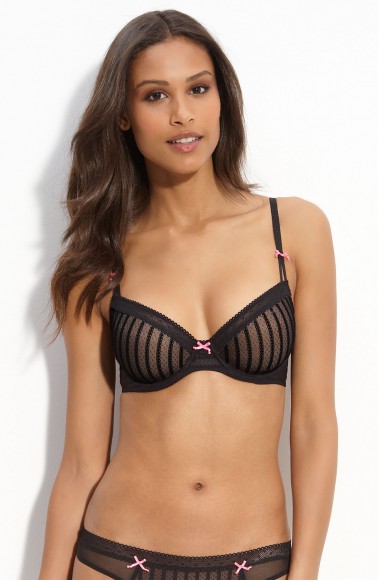 I don’t love either of these stores for streetwear, but both of these stores (and the similar Ross) are my secret lingerie hunting places. This is where you can find a five-dollar bra if you hunt hard enough. If you need a cheap or discreet binder alternative, they also have compression sports bras in their activewear section. You’ll get more mileage out of this type of giant-heap-of-stuff store if you come in with some prior knowledge about lingerie and know how to sift through the polyester granny panties and dismal bras to find things like... I dunno, Betsey Johnson lingerie for under $20, or a five-pack of Ralph Lauren boxer briefs, which I didn’t even know existed. None of these stores seem to have any lingerie presence online for some reason, so unfortunately you’ll have to go in person. 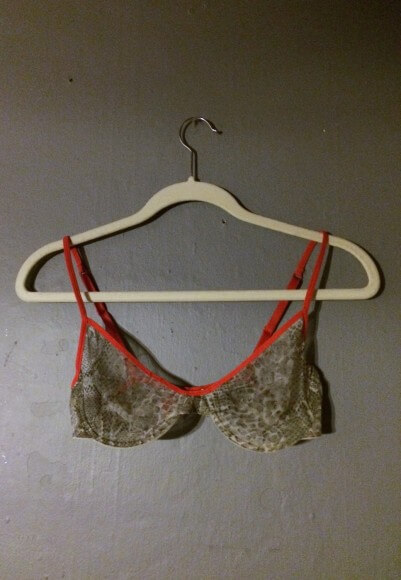 Calvin Klein Sheer Snake Bra from the 90s, maybe: $2 at my local thrift chain. Via my closet.

Wait, hear me out. I have a friend who got their entire drag persona at a thrift store in one fell swoop: orange tights, mesh stockings, a pleather bustier, and a padded bra in a large band size. Thrift store lingerie shopping is maligned because of germophobia and (if we're being honest) classism, but the benefits are great: you save the environment from more production of new goods, and you save yourself some money. While I wouldn’t wear someone’s used underpants, I’ve definitely bought thrift store corsets, slips, and longlines. And where else am I going to get a Calvin Klein snakeskin bra with red piping? When did Calvin Klein even have that aesthetic? Not in my living memory, certainly. I can’t vouch for the prices in your area, but I usually pay no more than $5 for any piece of thrift store lingerie. Wash your finds, obviously.

These, of course, are just my regular go-tos. I’ve found lingerie deals everywhere, from Amazon to Victoria’s Secret, but these are places that routinely have things I can afford that have at least some degree of quality, style, and that undefinable Queer Aesthetic factor I crave. If you’re broke and queer and you love lingerie as much as I do: where do you get yours? Let me know in the comments, so we can raid these stores together.