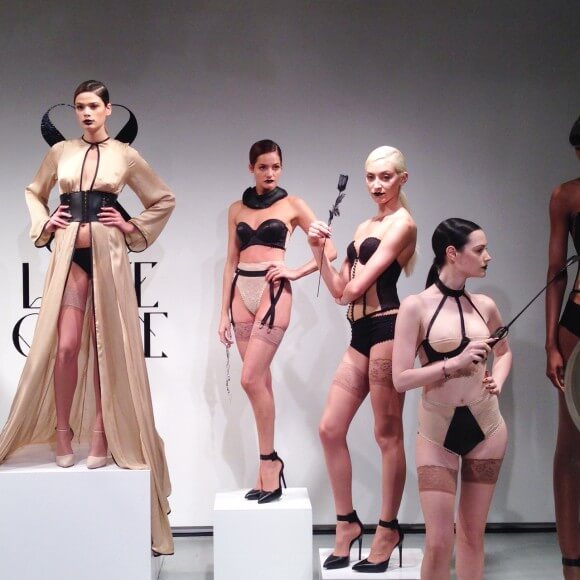 Lingerie Fashion Week (or LingerieFW) kicked off on October 24th with a bang and a bunch of exciting new talent on display. Since its launch in February 2013, the lingerie event has been growing and attracting a wide range of visitors and exhibitors. This season continued the trend, with a variety of old and new designers showcasing their brands and making us eager to see what the Spring/Summer 2015 season has in store.

Alongside LingerieFW veterans were many newcomers this year that provided viewers with an intriguing glimpse of their talents. Numerous indie brands just starting out were featured from various countries including some from South America, Eastern Europe and a highlight on new UK labels, most of which succeeded in knocking it out of the park with their newness and innovation.

One of the things I was most struck by this season was the amount of diversity displayed by many of the exhibitors. Not only in their unique style and designs, but also in the models they chose and countries they represented. Even the hors d’oeuvres served this season were vegan(!), catering to a more diverse range of diets than most of us are used to seeing. On the runway it was refreshing to see some diverse body types, genders, and ethnicities thrown into the mix, which gave a more accurate portrayal of how the designs can and would be worn by a wider range of customers.

While the lingerie industry is a much smaller section of the fashion world and may not have the same amount of reach, I was very pleased to see the effort made at LingerieFW; hopefully this will be a continuing trend going forward, as I know it has been welcomed by both buyers and customers alike. Here are a few examples of the diversity exhibited by the designers at the Spring/Summer 2015 Lingerie Fashion Week. 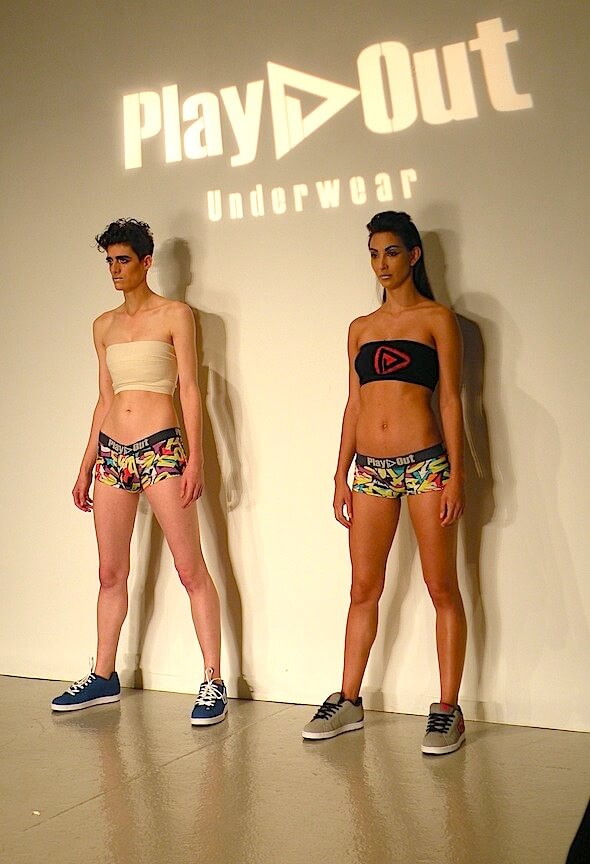 Models for the Play Out Underwear runway show

Often a sensitive subject, the topic of gender identification and presentation has become less taboo throughout the years, bringing to light the issues - and often the struggles - faced by those who don’t necessarily fit into the conventional perceptions of gender. There are many different factors that influence gender identity, and while most clothing and lingerie companies cater to people who identify as men or women, some are beginning to be more inclusive and expansive regarding their customer base.

Newcomer Play Out Underwear is one such brand featured at LingerieFW this season. Their line of "gender-neutral" underwear focuses on comfort with bright fun prints and wide logo waistbands. Androgynous models were sent down the runway together with unambiguously gendered models in matching skivvies. While the fit and cut of each pair is specific to external or internal genitalia, the styles are all the same with a focus on sporty comfort and minimal styling for ease. 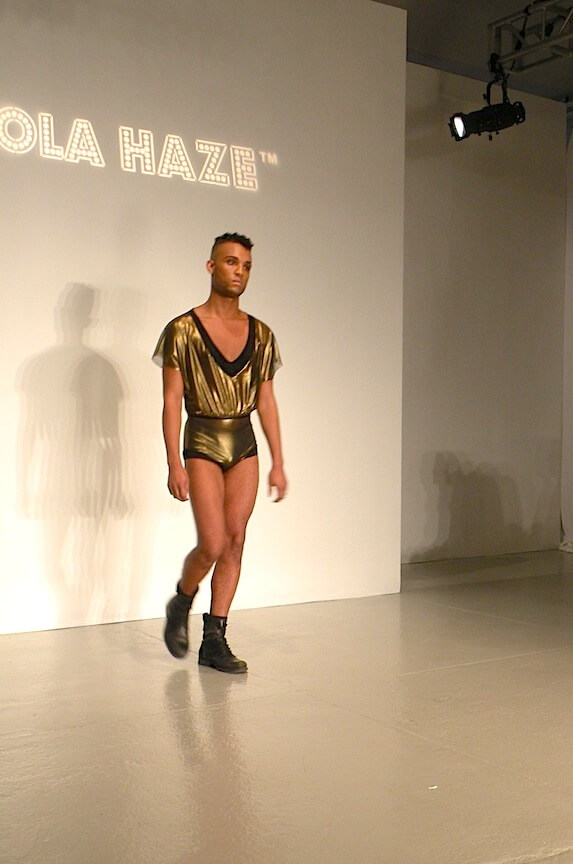 Also giving a nod to gender equality on the runway was Lola Haze with a diverse mix of models showing off her high-end sleepwear collection. One of the show-stopping pieces included a glittering golden teddy with mesh neckline that went down the runway on a male model complete with combat boots and a high-fashion attitude. This unexpected twist was a welcome surprise to an already impressive runway show, and illustrated how all genders can look fun and fierce in lingerie. 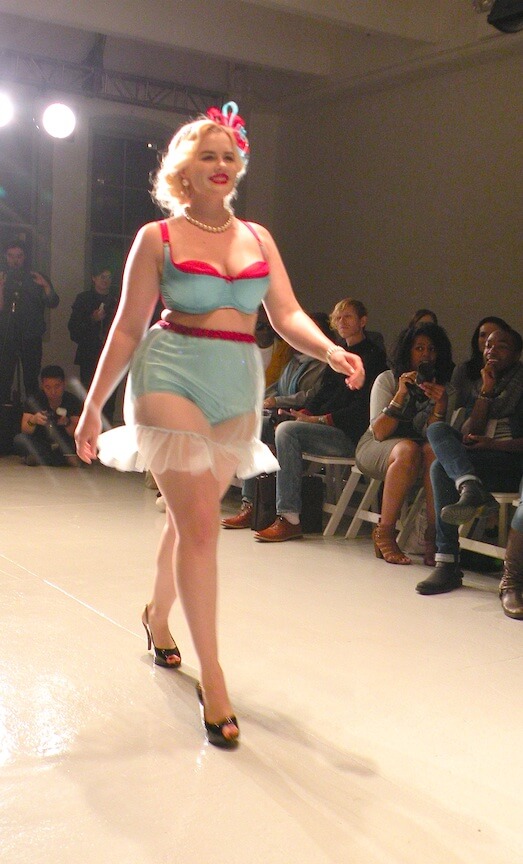 Model for the Secrets In Lace runway show

Perhaps one area where the fashion industry has really caught some flack is for their use of super slim models whose body types are often unattainable for the average consumer. While times are changing and more plus size models are being utilized than in the past, it is still a struggle to get more sizes and shapes represented in the industry. However, this LingerieFW I was pleased to see more representation of curvy girls at the Secrets In Lace runway show, with some gorgeous ladies rocking fun vintage silhouettes and bringing the pin-up girl look to life. These fuller-figured models shared the runway with slimmer models as they sauntered down the catwalk together in satin briefs, bullet bras, mini petticoats and feathered robes. Also featured was buxom burlesque dancer Angie Pontani who modeled some Secrets In Lace underpinnings while performing a burlesque-style striptease for the audience. 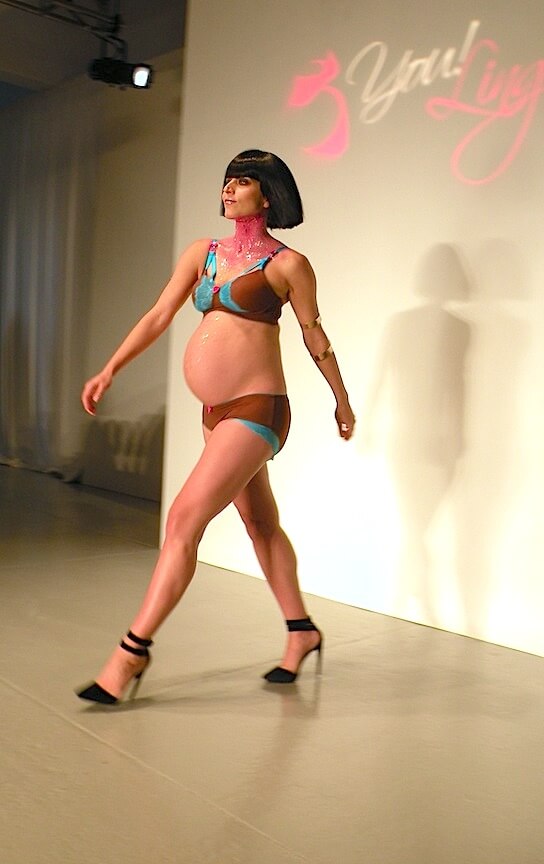 Model for the You! Lingerie runway show

Another brand worth mentioning was You! Lingerie, a playful line of nursing bras and maternity lingerie for expecting and new mothers. Glowing pregnant models looked sexy and confident on the catwalk in dark wigs, glitter, and futuristic jewelry while the flirty lingerie featured their growing bodies front and center. Round bellies were played up with fun and functional bras and panties in an array of colors and prints that were so cute, many of us wished they came in non-maternity options. Seeing the big bellies celebrated and emphasized was a welcome departure from the usual lingerie fashion marketing. 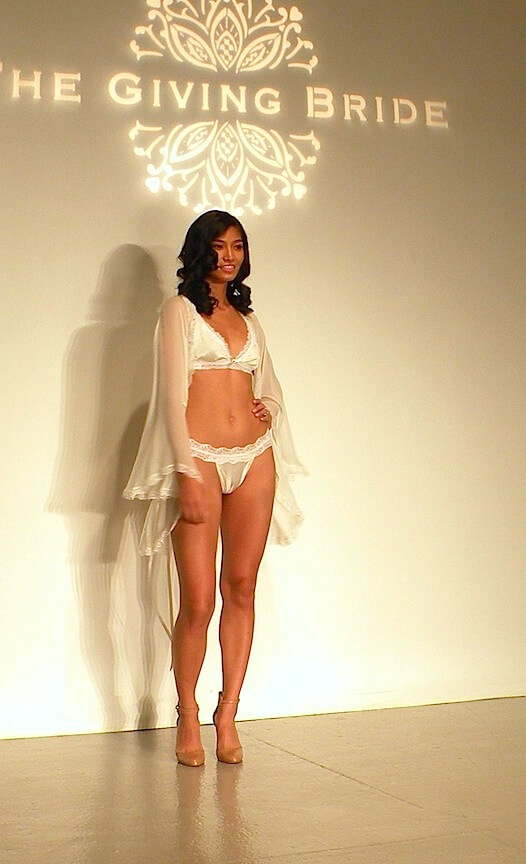 Unfortunately, the fashion industry has also not always been known for accurately representing an acceptable range of ethnicities on the runway. These days you can probably count the number of well-known African, Hispanic, Asian and Middle Eastern models on your fingers. Seeing a more diverse assortment is something many of us hope for, and the little changes that we do see in the industry are welcome and gaining momentum. 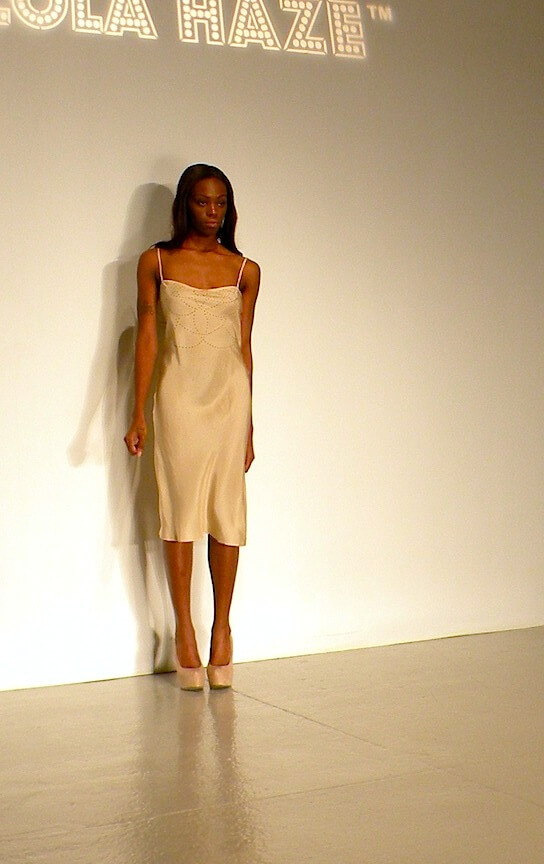 In the past, LingerieFW runway shows and presentations have had their share of diverse models, and this season was no exception. Almost every label exhibited had a small representation of various ethnicities at some point during the event, highlighting their designs and showing them on varying skin tones to give a bit more of an accurate representation of the real world. While the industry still has a long way to go, it’s gratifying to see that conscious and more inclusive changes are taking place each season.

Not only were the models diverse for this season of LingerieFW but the offerings were too. There were enough featured designers to satisfy almost every preference of style and taste. A fan of soft, floral lingerie? You might like Stephie Ann Lingerie out of the UK. Prefer something dark and edgy? Check out Love Cage NYC complete with studs and leather. Some great new brands were front and center for Spring/Summer 2015, bringing new names to light as well as some of our tried-and-true favorites. A few more notable brands included: 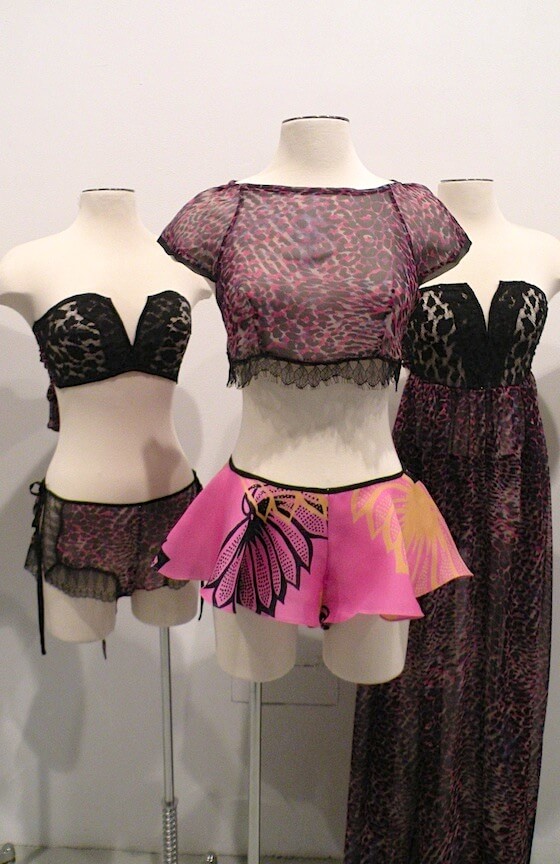 Suzy Black with her fun and edgy mix of color and texture. 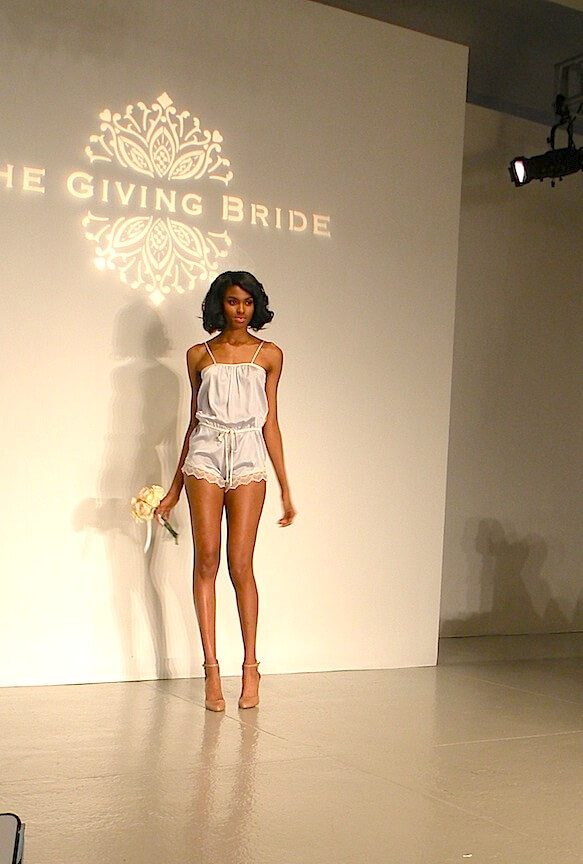 The Giving Bride with their luxurious feminine bridal pieces. 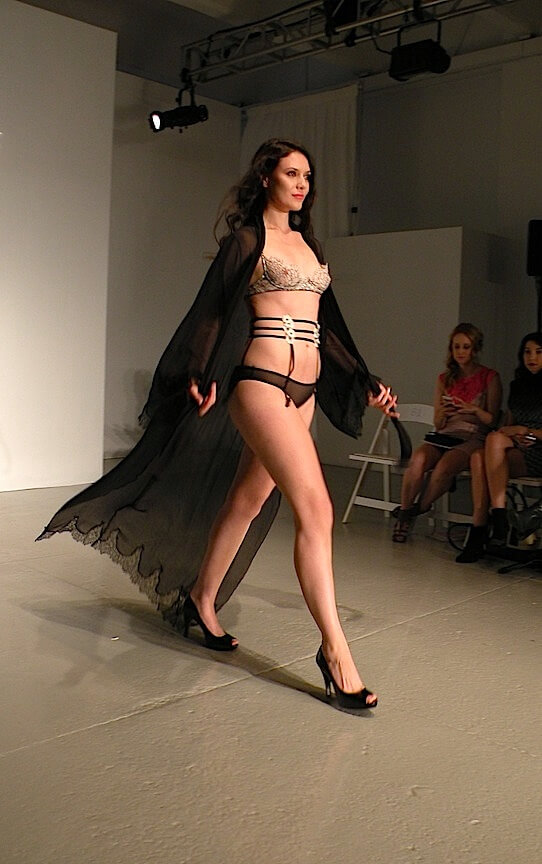 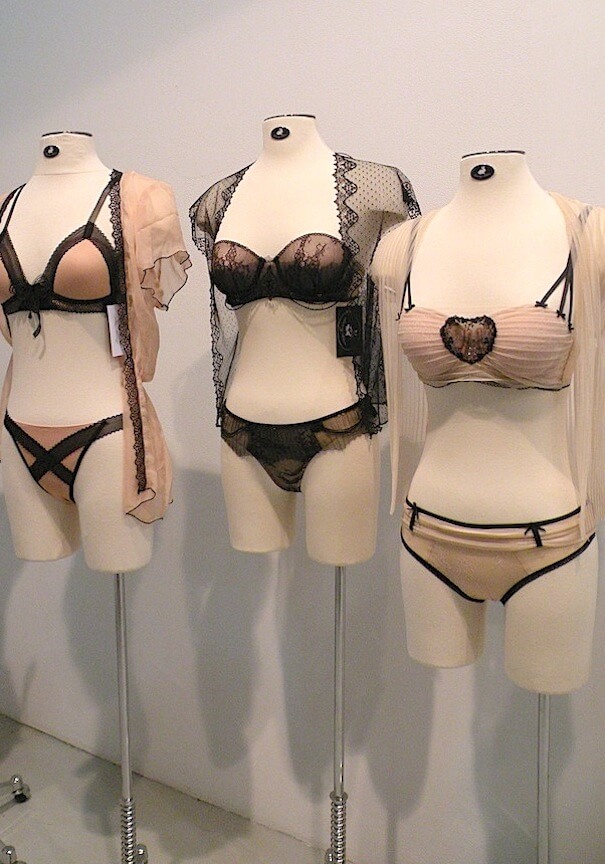 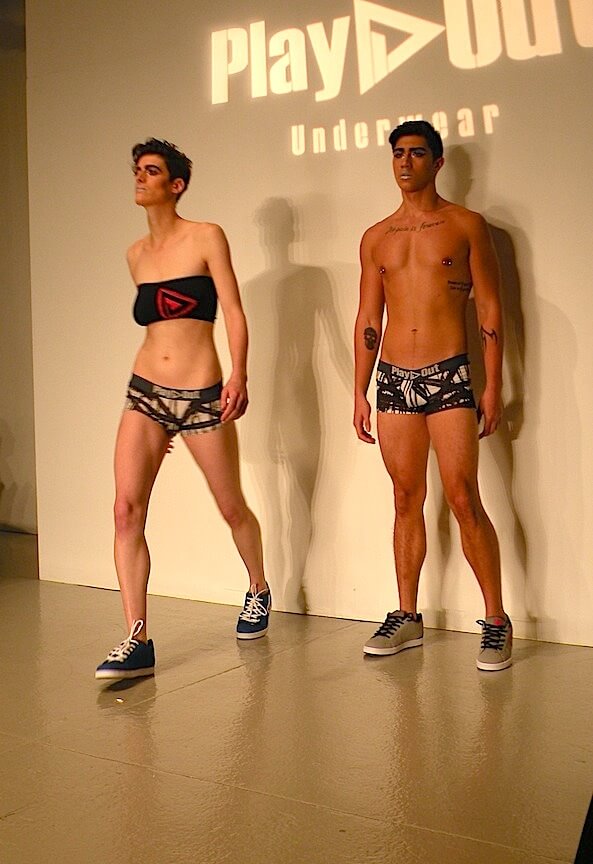 Lingerie looks from the Play Out Underwear runway show

Play Out as mentioned earlier with their fun and sporty aesthetic.

What do you think of these new brands from LingerieFW? How do you feel about the diversity (or lack thereof) in the fashion and/or lingerie industry?