A Quick Look at the Intimate Britney Spears Lingerie Collection 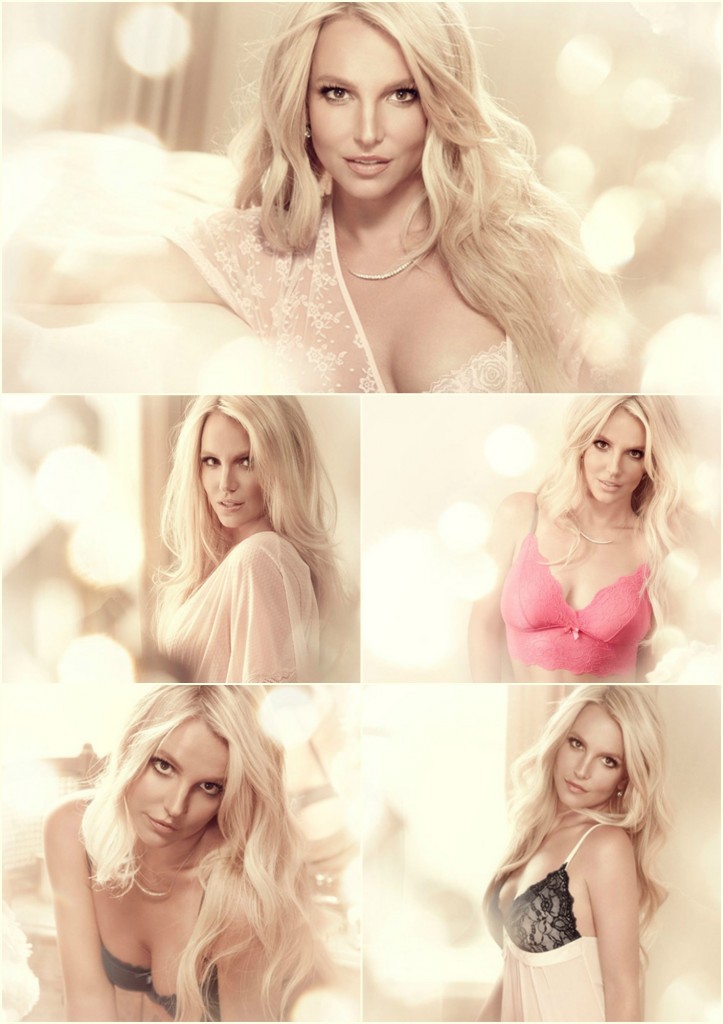 A couple of days ago, during New York Fashion Week, Britney Spears debuted her new lingerie collection, The Intimate Britney Spears. As is to be expected for a celebrity of her calibre, there was a lot of buzz about the launch; I've seen articles everywhere from the NYTimes to MTV.

There's also been a significant uptake by retail stores, mostly in Europe (more on that later), but a little in the US. Bare Necessities appears to have an online exclusive for much of the lingerie, and Classic Shapewear will carry at least some of the loungewear (I found this webpage for a pair of Britney Spears' sweatpants though you can't actually search for items). And wisely, The Intimate Britney Spears website is enabled for direct-to-consumer sales.

The Amaryllis Collection - My favorite of the debut "stories" or ranges, I thought the loungewear for this collection was very strong, and the use of lace is sure to appeal to the target customer demographic. The long nightdress and robe in particular are excellent pieces (And I think the best pieces from the entire debut collection), and I wouldn't be surprised if this series becomes continuity. 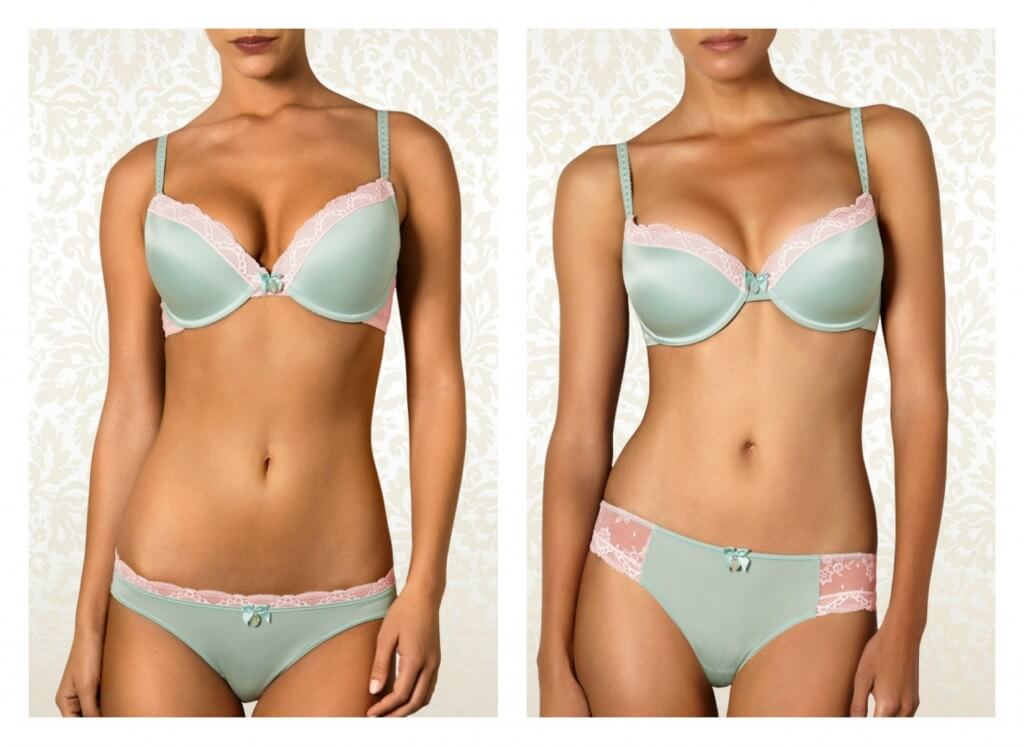 The Ambrosia Collection - I like the color story for this range (seafoam and pink), but the actual silhouettes are nothing to get excited over. This seams to be a case where Change pulled directly from patterns that were already working for them, and it shows. In addition, with only two looks, this series should have been expanded or dropped.

I admit, this is not a brand I was interested in personally. Britney Spears is not a fashion icon of mine, and I have no special desire to model my look after her. However, professionally, as someone who watches and reports on lingerie news, I was very intrigued by the prospect of what would be on offer. And to be perfectly honest, I was hoping for something a little showgirl-y and dynamic.

It goes without saying that celebrity collaborations in the lingerie world are nothing new. Jessica Simpson had her own lingerie line for a minute (though I haven't seen it sold anywhere in ages). More recently, Agent Provocateur collaborated with Penelope and Monica Cruz for the L'Agent by AP line (which, despite their design claims, contains a number of reworked AP pieces), and Dita von Teese is working with Diamond Cut, International on her own range (which, after a rocky first season, has turned into a collection I genuinely love).

Even before that, Elle Macpherson and Stella McCartney licensed their names to Bendon Group, and Bettie Page's estate did the same for Secrets in Lace. So the concept of a celebrity adding visibility or cachet to a lingerie company is tried and true one.

The Anemone Collection - This is my second favorite, and the one I like most on a personal level (as in, I'd wear it). However, I love black lingerie, so take that as you will. I'm especially a fan of the knickers here, and I thought the bras were pleasant enough, with the wireless triangle cup being the on-trend star. The lounge dresses, though, never really rise above the level of, "Oh, that's nice."

The Angelica Collection - Like the Ambrosia series, I enjoy the color story here (grey and pink should make an appearance more often in lingerie). However, all the shapes just feel "done." I asked myself if I would care if the Britney Spears name wasn't attached to this, and the answer is no. Of the five looks, I'd say the first and last are the strongest, but neither of them is especially strong when compared outside of this particular brand.

In the case of The Intimate Britney Spears, this collaboration is happening through Change Lingerie, a Danish lingerie company founded in 1995 (which is why most of this new collection's stockists are in Europe).

The benefits of this collaboration are that The Intimate Britney Spears can lean upon Change Lingerie's extensive manufacturing and industry connections, regarding both sizing and distribution. The downside, however, is that Change already has an established look and way of doing things...so one has to wonder just how creative, innovative, and "Britney-like" this new collection will be.

The Bergonia Collection - Another gorgeous color (I love deep, charcoal-y grays for winter), but again, the shapes are basic. The center bra, a non-padded underwire, is all right, but I wonder if this entire range could have been edited out with no loss to the debut collection. The sense I get overall is that there was not enough editing done before release; too many looks are included.

The Buttercup Collection - I know you're tired of me saying, but this is a great color (albeit a bit of an odd choice for Autumn/Winter), this collection felt the most 'Britney-like' to me. I'm getting very 2001 "I'm Not a Girl, Not Yet a Woman" vibes here, and I'm going to assume that's intentional. The triangle wireless is definitely a standout. Sadly, those shorts in the first image appear to not be available for sale, which is a shame because they're great.

Sad to say, almost all of the looks fell flat for me. I didn't see anything daring, interesting, or even mildly thought-provoking. It all felt like I'd seen it before.

I think The Intimate Britney Spears would be right at home in your local JCPenney's or K-Mart, and that's not a dig against the brand. Rather, those are both very mainstream stores which would be perfectly suited for this kind of mainstream look. The price point is okay (around $50 or so for a bra and around $60 or so for a gown), but I feel like I can find pieces that are significantly more exciting for about the same amount of money elsewhere. All in all, I'm underwhelmed.

The Clematis Collection - The second of two ranges that I really believe should have been edited out, I'm not sure what this series add to the overall debut. Like everything else here, it's "nice," but it also feels like something someone didn't want to get rid of... and that's not a good reason for keeping it in.

That said, I'm also optimistic. As I mentioned at the beginning of this post, I didn't think Dita Von Teese's first season was exceptional either, and I've gone on to become a staunch brand advocate. I hope the same happens for The Intimate Britney Spears. I am always excited to see new collections, celebrity or otherwise, and I hope Change takes more risks and experiments with more looks in the upcoming seasons.

To me, it'd be a shame to use the Britney Spears name to sell the same old, same old, but that might also be the point. After all, would people be as excited about Change's usual silhouettes without the celebrity name? I think not.

What do you think of The Intimate Britney Spears? Anything you like?