Why I'm Not Very Excited About the New 'Aerie Real' Campaign

By Cora Harrington January 28, 2014 in featured 28 comments
Share this article 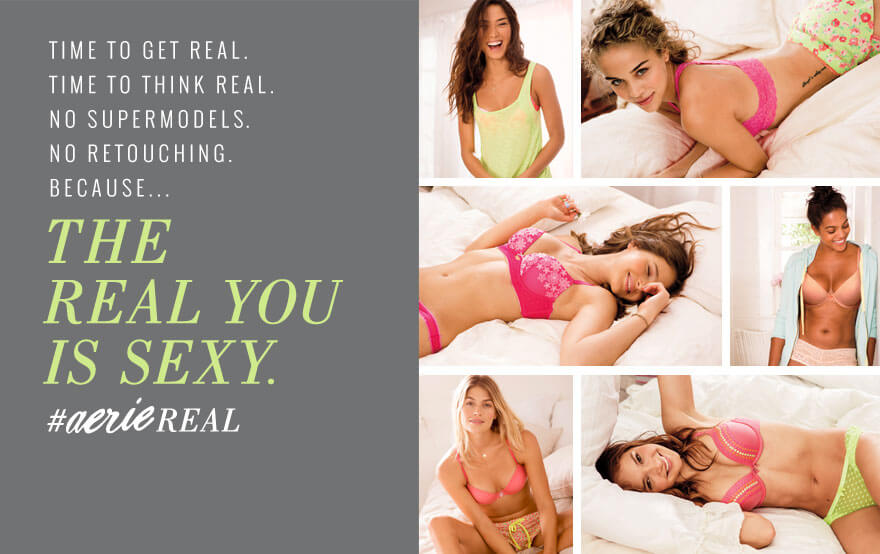 A week or so ago, American Eagle's lingerie division, Aerie, launched a new marketing campaign named "Aerie Real." The campaign is all about Aerie's new stance on retouching --- the company says they're no longer airbrushing or editing photos of their models (some of you may recall that Debenhams did something similar last year). I'd actually heard about the campaign through Tumblr a day or so before it launched, and once it was officially live, I checked out Aerie's site. But I definitely hadn't planned on writing anything about the campaign. However, I've gotten so many messages in the last few days asking about my thoughts on Aerie Real that it just makes sense to address it in a blog post.

If I could describe my reaction to #AerieReal in a single word, it would be ambivalence. 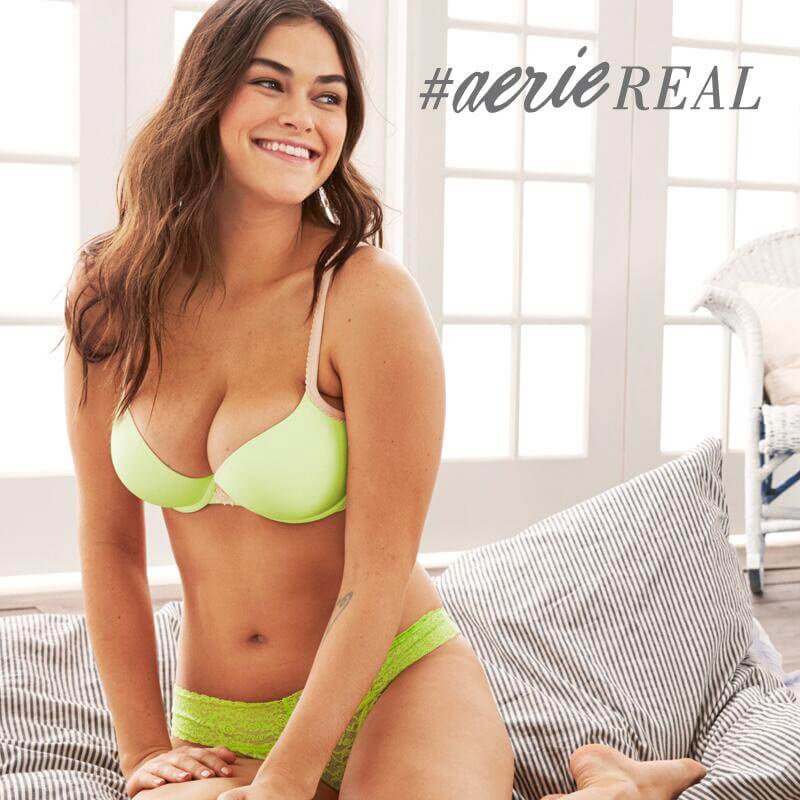 Of course, it is good to see Aerie this campaign. We need more images of unphotoshopped women. It's a vital step towards having more and varied representations of women in the fashion industry. But I'm not really on the "all photoshop is bad" bandwagon. I think of photoshop in the same way I think of makeup, only one is applied digitally and the other physically. Can makeup be applied poorly? Yes. Can photoshop be used poorly? Yes. Does the fact that people don't always know what they're doing with makeup or photoshop mean those products are evil? No. In the same way I wouldn't automatically question a model's "realness" because she's wearing concealer, foundation, highlighter, eyeshadow, blush, bronzer, and lipstick in a final image, I wouldn't question her realness because she's gotten stretch marks smoothed out or scars removed. And I say this as someone who used to have the scars on my arms removed before I posted photos to the blog. The marks on my body (and the presence or absence thereof) do not define my realness. Only I do that. And as Marianne discussed in her stellar piece on photoshopping, cameras and eyeballs don't work the same way. 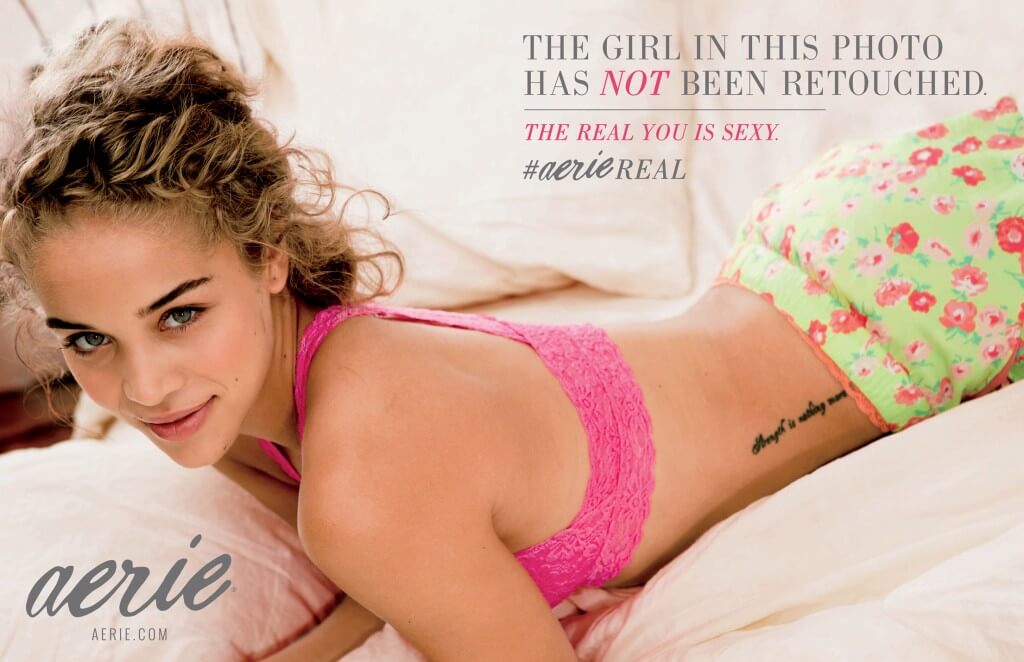 Besides all that though, it seems obvious to me that Aerie is going for the easy victory, the "low-hanging fruit," so to speak. They brag about not using supermodels (I can't recall ever seeing a supermodel in an Aerie campaign, by the way), yet the women in their campaigns are undeniably young, attractive, professional models. They're thin. They're fairly unblemished, at least as far as I can see. They have straight hair. Smooth skin. Toned muscles and a proportional body. In fact, the only "flaws" I can notice are an itty-bitty tattoo here or there and a slight bit of belly softness. Is this really the "brave new world" Aerie is ushering in? A world full of unphotoshopped models... who are identical in every way to traditional models? Call me cynical, but that's just not impressive. 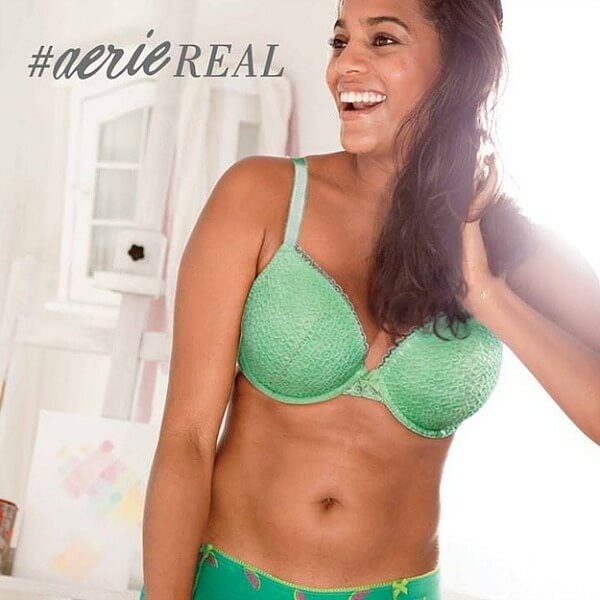 Granted, Aerie is doing some great things with this campaign. Regular readers of TLA know that diversity is a huge issue for this blog, and I love that Aerie is using women of color in their current campaign. There is also a little bit (very little, but it's there) of body diversity, and the more people you can see wearing a brand's products, the better. Yet if we're going to talk about body image and self-esteem and body positivity and pushing the boundaries of what's beautiful, I feel it's important to remember that a teenager or twenty-something model is still pretty normal by fashion industry standards. There's nothing radical, free-thinking, or forward-moving about using conventionally attractive people to sell lingerie. I don't instantaneously become just like your model because she's unphotoshopped. This campaign sounds good (and it certainly had the marketing hype to push it forward)... but once you dig deeper than the width of a sheet of paper or so, it's really just more of the same. Only in a slightly different package. 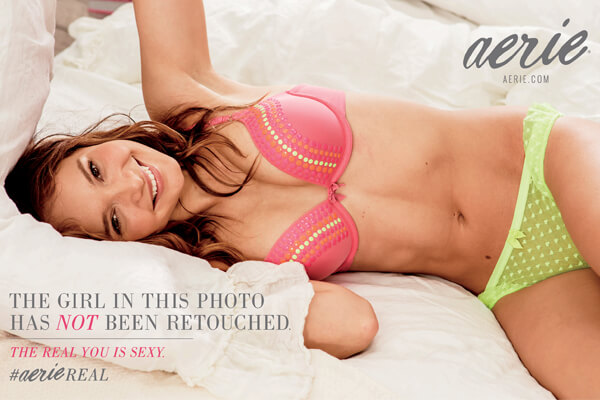 I would have been much more impressed if Aerie had really stretched themselves and taken a risk as a brand and a company with #AerieReal. It would have been wonderful to see them recruit models from their customer base to be the first spokeswomen for this new campaign. I would have loved to read about a model with an authentic story behind her, something with real depth and resonance. But maybe my expectations were too high. American Eagle is a large company with a lot of investors, after all, and those kinds of brands don't usually take risks. Aerie went with the easy win because they knew it would be profitable. Because they could do so without really deviating from their core brand values or alienating any of their target customers. But I just can't get excited about companies that stay within the lines, and then declare themselves daredevils. Yes, this was a bit of clever marketing, and it was interesting to watch the PR for the campaign unfold. But I don't feel passionate or excited or even vaguely moved. It's just another marketing campaign in an endless sea of marketing campaigns. The only question I have now is if Aerie will stick with it.