Plus Size Perspectives: Why I Post Lingerie Photos Online

Plus Size Perspectives: Why I Post Lingerie Photos Online 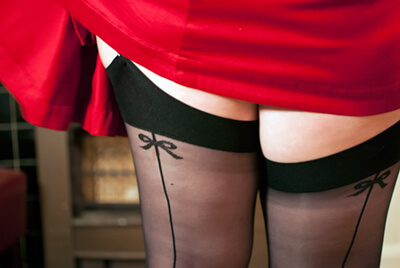 If you're a lingerie blogger who posts lingerie photos online, you're inevitably going to run into some social situation where somebody asks about it. It's usually in some incredibly awkward public place, like at a cocktail party or sit down dinner where your fork is already halfway in your mouth when someone starts to say, "So, I heard you're posting lingerie photos online now? Isn't that a bad idea?" The truth is that for a long time, I did think it was a bad idea. I didn't post photos here as part of my columns and I didn't post photos on my own blog. When I got asked about lingerie photos online at parties, I would blush and awkwardly mumble something into my plate.

The truth is that there are lots of reasons to not post lingerie photos online, especially if you're a lawyer by day or something. I'm lucky to work in the lingerie business, so I can generally assume that my clients are a) reasonably mature people when it comes to bras and panties and b) not really judgmental about lingerie photos online. I've done this for awhile now and intend to do it for many more years, so it's unlikely those photos will have much effect on my career prospects. Even so, I didn't feel personally comfortable posting photos online for a long time. The whole idea made me feel vulnerable and exposed, so I wrote a lot of words and detailed reviews to get around the lack of pictures. 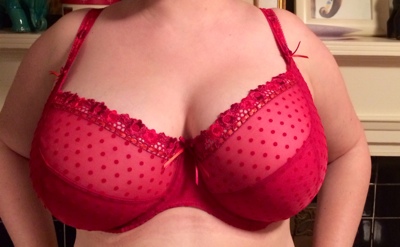 In the past year, I've haven't become a whole lot more comfortable with the whole picture process, but I have spent lots of time paying attention to stories about fat activism, online harassment and lingerie photos online. The best example of this happened recently when plus size lingerie boutique Curvy Girl Lingerie started posting pictures that their customers had submitted online. I followed Curvy Girl before all this went viral and was amazed to see the media spiral start. The women posting their pictures were beautiful and brave, but I didn't see it as anything particularly controversial. Apparently Maria Kang (aka "Fit Mom), Fox News, CNN, and outlets like The Huffington Post saw it as a big deal. This cemented the realization that I had been coming to over the last several years: if you're in an underrepresented group due to gender, size, age or ability, posting images of yourself online is a radical act. It's also a necessary one. After all, how can we call on companies to use models who represent us if we're unwilling to show ourselves in a public space? How can we combat online harassment of women (a deadly serious and terrifying issue) if we don't stick together and show ourselves? 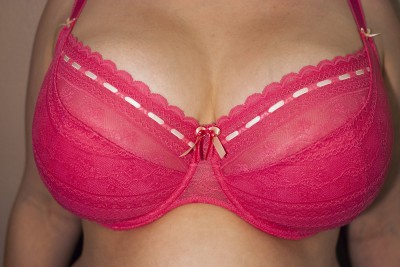 Ultimately it wasn't my comfort level that changed --- it was the need to contribute to what I felt was something bigger. Lingerie pictures help you decide whether to buy a bra, but they also help show the world that all kinds of women are lingerie consumers. It helps people see bodies and people who look like them, which may give them the confidence to love their body a little bit more. Lots of fat activists talk about being willing to take up your space in the world rather than shrink into something smaller, which is something I think everyone can take to heart. Instead of hiding, try to assert your space as a person of worth who deserves to be seen and heard. The more we hide, the more everyone else can put us in boxes and turn us against each other, which isn't fair to anyone. For me, posting lingerie photos online is one more way to spread the idea that all bodies are good bodies.

Since we're at the start of 2014, I'd love to encourage all of you to do one thing to be seen this year. It doesn't have to be photos online, but I think the world would be a different place if we worked at showing the variety within it rather than just staying silent.

What can we do this year to show that all bodies are good bodies rather than work against each other?