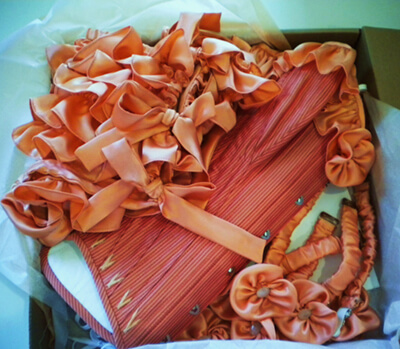 The indirect costs of production are much easier to overlook. For example, the planning phase of a new collection is completely unpaid work for an independent designer. Eighteen months before the garments will hit the racks, I begin preparing for the new collection: I spend six to ten weeks in my research/development and sample-making phase. This means forecasting market trends, deciding colors and fabrics to include, prototyping samples of basic concepts and silhouettes, experimenting with new materials, etc. Once I'm prepared to make the final samples of each look, I order fabric and trims, draft patterns, cut fabric, sew garments, and test the fit of each one in a variety of sizes. Each collection contains a total of 20-30 individual garments, which means that this process is repeated that many times. (And that's assuming that there weren't any mistakes or design changes along the way, which there always are!) This step is critical to the success of the final designs and it's exciting and enjoyable for me, but it's incredibly time-consuming as well – and remember, no one is paying me during this period.

All the while, this process requires funding and a location in which to do it! Few small businesses, my own included, have the investors and backing to keep them afloat. For independent designers, that requires digging into our own pockets to keep projects moving forward --- meaning that last season's work that I've been “paid” for is more than likely to go right back into next season's expenses. 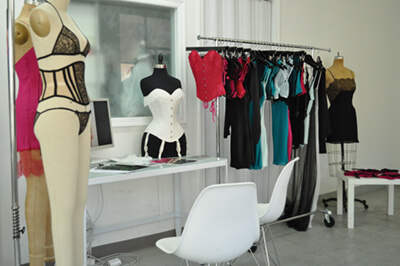 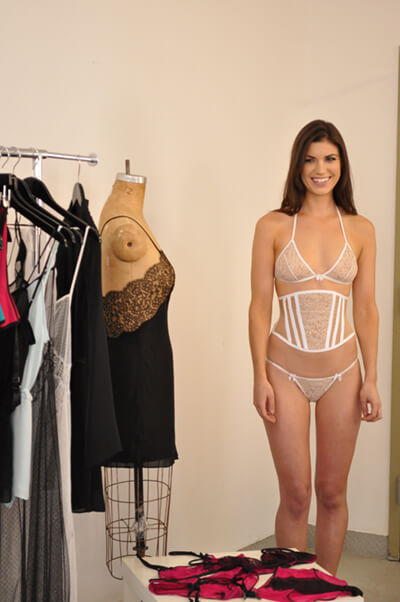 Overhead is frequently the biggest hurdle to overcome: From renting office space to business insurance to electricity, it adds up quickly. At a bare minimum, a designer in New York is spending $1000-$1500 a month in basic operating expenses. (Consider rent, business insurance, electricity, internet, banking and credit card processing fees...) This is assuming that they had the up-front capital to purchase a work table and chairs, industrial sewing machines and irons, mannequins, patterning tools, and garment racks, easily in the $5-$10,000 range. Now, you may argue that this designer could operate the business with less money by working from home with cheaper equipment (but then they would be sacrificing professionalism), or by operating in a less expensive city (but then they would have to incur the cost of buying trips to New York). So there may be “cheap” ways to do it, but they would each become costly in other ways.

Marketing and advertising are another area of high-cost to the designer. As an independent designer, it's not only my job to reach out to my end customer, but also to retailers and store buyers! It's extremely important to do so through paid advertising (whether on blogs or through Google ads or in print) as well as social media. Between Facebook, Twitter, Tumblr, Instagram, Pinterest, my blog, and newsletters, I personally spend about 12-18 hours a week, 52 weeks a year, on social media for my business. It's extremely important to share photographs and inspiration, to talk to the customers, and to build a relationship with stores this way – but again, these are completely unpaid hours, and advertising is pricey! Another similarly important marketing tool is the trade show (or fashion shows), where designers show their new collections to retailers. The fees alone for participating in a show are generally in the $3,000-$8,000 range, not to mention the travel, hotels, printed materials, and marketing surrounding the show – and designers are expected to show their collections twice a year. 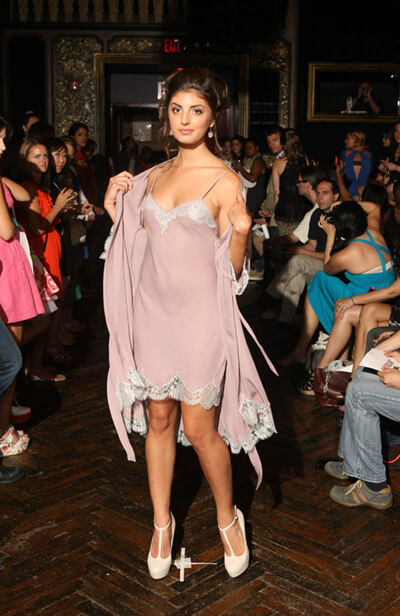 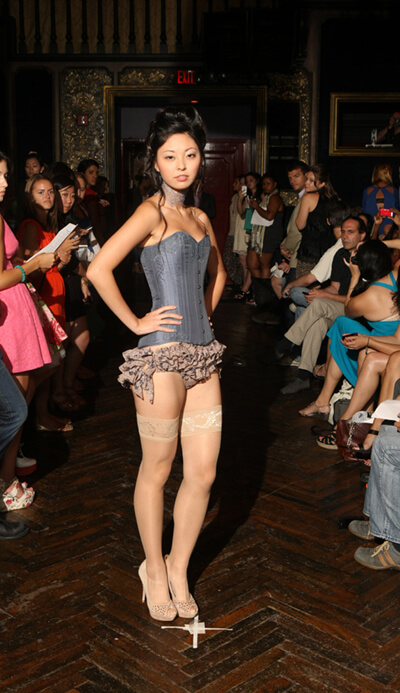 Producing catalogs and lookbooks of the new season's collection is similarly challenging. Even done with a tight budget in mind, photo shoots can cost anywhere between $1,000 and $3,000 – just for renting a studio, hiring a reputable photographer and model (including holding model castings and fittings), paying for assistants, hair and makeup and wardrobe stylists, and editing and retouching photos. (Not to mention printing the physical books and shipping them to stores!) All of this isn't easily translated into the final cost of the garment, but it's a lot of time and money lost if I sell garments “at cost” like a hobbyist or home sewer might do. 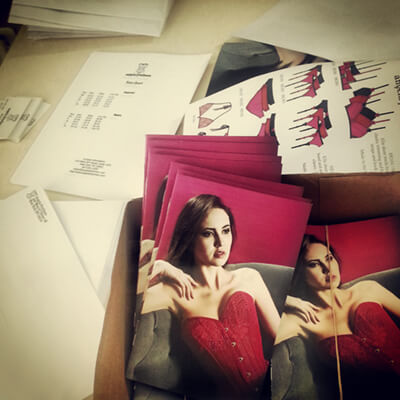 Because all of this can be difficult to calculate into final prices, designers use a multiplier to determine their final costs.  I try my best to keep the numbers as low as possible, so my multiplier is the bare minimum of 2 times (though I know designers who use 4!). This means that I take my direct costs (labor + materials) and multiply them by 2 to determine my wholesale price when selling to retailers. For a bra and panty set with a direct cost of $35, I will sell it to a store wholesale for $70.

Retailers also use multipliers to determine their prices, since they have many indirect costs as well (especially overhead and staffing). These multipliers are generally somewhere between 2.25 and 2.5, though at very upscale department stores carrying designer brands, it may be 3 or 4. For the same bra and panty set, the store will now sell it to a customer for $145-$175. Knowing this, you can do some division to find out how much money the designer makes from each garment and approximate how much the seamstress makes or the materials cost. It's important to remember that when you see a designer item priced at $200, the designer isn't pocketing that money. Not even half of it, or a quarter of it! There are many levels and people involved in getting that bra and panty set into your drawer, and each person takes a smaller and smaller cut as you move backwards.

Now, there are cases when independent designers can sell directly to the public instead of to a store, especially because of the recent popularity of e-commerce. This can be a great deal for the designer because they will pick up the profit of both multipliers – except at a price. In our do-it-all world, designers who choose to sell wholesale and retail must advertise to stores (for selling wholesale) as well as to end-consumers. This is great because it opens up a larger world of potential buyers, but the cost of advertising and the time it takes to do it both add up quickly. (This ties into the hectic social media schedule.) Even when you're buying direct from an independent designer, they're still not pocketing even half of the money. 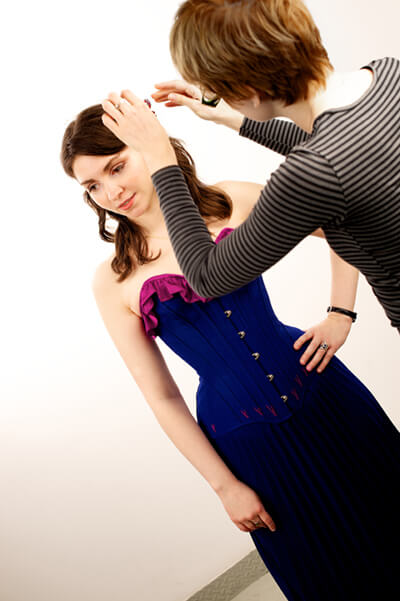 Here are some of the indirect costs associated with an independent designer:

-marketing and advertising to end customers

-marketing and advertising to retailers and businesses

-making enough profit to produce the next collection

Bearing in mind that most independent designers work side-jobs (or full-time jobs!) to pay the bills alongside running their businesses, you can see how running a fashion business isn't all that profitable in itself. For many designers, it's considered a great season if they can just stand to break even with enough capital left over to begin creating a new collection. We know the odds are against us, but we forge on, knowing that the first five years are the most challenging for all small businesses, and if we can break that mark, we'll be on our way to actually making a solid profit.

It's not easy to be an independent designer, and we certainly don't do it for the profits. We do it because we are passionate about the work, and because we want to stretch our creative minds and build something phenomenal. Believe me, if I were in it for the money, I'd be a lawyer! (No, really!) But that's not what it's about. Similarly, when you're supporting independent designers, you're not doing it to get the lowest prices in the world! You're supporting small businesses to keep money in your local economy, to know that you're funding ethical business practices, to purchase something artistic and extraordinary that you can't find in the local mall, and to help an artist flourish. 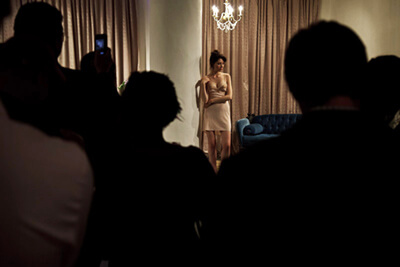 This is the true value of what I create as an independent designers, and the true value of what you're funding when you choose to shop locally. It may not be the cheapest product around, but you understand that cheap prices mean cheap clothes, cheap business practices, and cheap quality. What I'm offering as a designer is the true value of something handmade, made with care and love and integrity --- and hopefully for those reasons, you as consumers will value my work in a unique way.