Why Victoria's Secret Has No Business Making Mastectomy Bras 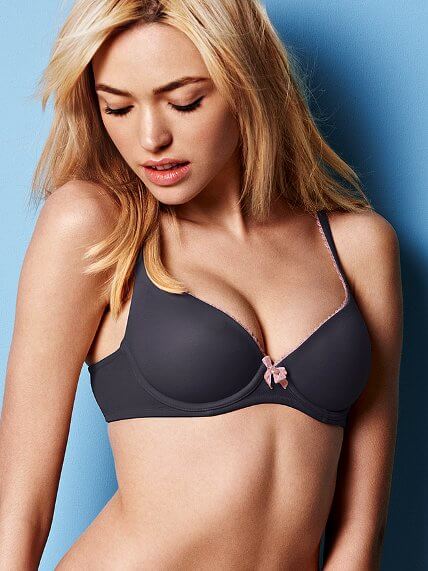 Last week, the internet was all afire with the news that Victoria's Secret, probably the most famous lingerie company in the world, would not be making bras for women who've had mastectomies. In case you haven't yet heard of this story, Allana Maiden (whose mother is a breast cancer survivor) created a Change.org petition a few months ago asking Victoria's Secret to begin making and selling mastectomy bras. Victoria's Secret took the petition surprisingly seriously, flying Ms. Maiden and her mother to company headquarters in Columbus, OH and promising to review the feasibility of carrying mastectomy bras in their stores.

Well, after much deliberation, the company announced that they were not moving forward with selling mastectomy bras, and gave the following reason, issued in a press release:

“Through our research, we have learned that fitting and selling mastectomy bras…in the right way…a way that is beneficial to women is complicated and truly a science. As a result, we believe that the best way for us to make an impact for our customers is to continue funding cancer research."

Many people, including Ms. Maiden herself, were shocked. In one article, Allana Maiden compared Victoria's Secret to Nordstrom, implying that since the latter sold mastectomy bras, then the former should as well. In addition, several prominent fashion websites wasted no time mocking Victoria's Secret's decision with headlines like, "Victoria's Secret Won't Make Mastectomy Bras Because Science is Hard," calling the petition "basically a bundle of PR points tied with a bow and dropped in the massive lingerie company's lap."

But here's the thing: making mastectomy bras is hard. The needs of women who've had their breasts removed is different from the needs of women who haven't, and Victoria's Secret absolutely made the right decision here... no matter how unpopular it is. While there are still plenty of reasons to criticize the lingerie giant, their reluctance to jump into the mastectomy bra market is definitely not one of them.

In the original Change.org petition, Ms. Maiden focuses on the emotional side of mastectomy bra shopping, saying "it doesn't seem fair that shopping for bras is such a discouraging, time consuming and frustrating ordeal," and "I think they deserve to feel beautiful and Victoria's Secret is the perfect company to help make that happen with a line of "Survivor" mastectomy bras." In a follow-up interview with ABC news, Ms. Maiden also says, "But I felt that if anyone could do it, they could. They have everything in place.”

While I completely agree that every woman deserves gorgeous lingerie, I disagree with the idea that Victoria's Secret is the perfect company to handle every woman's needs. As I've mentioned before, no one company can be expected to make every single kind of bra, and I respect Victoria's Secret's honesty in admitting that they are not the company best suited for this hard-to-fit market.

The honest truth is that not only is Victoria's Secret ill-equipped to handle mastectomy bras, most lingerie boutiques and brands are in the exact same position, which is why mastectomy bras are a specialized area of the lingerie industry. The shape of the breast, the firmness, the tissue, the density... everything behaves differently once a woman has a mastectomy. And that's not even getting into concerns from scar tissue, swelling, fluid retention, and reconstruction. Put simply, you can't just throw together a mastectomy bra and hope for the best. It does require a lot of specialized research, testing, and trial and error. And of course, selling mastectomy bras also requires fitters with specialized expertise.

It's easy to accuse Victoria's Secret of not caring about women who've had mastectomies (an attitude which I think reflects, among other things, a complete unfamiliarity with bra design), but Victoria's Secret was stuck in a Catch-22 here. Refuse to do mastectomy bras and have everyone accuse them of hating female breast cancer survivors, or do a line of mastectomy bras and deal with the inevitable criticisms surrounding fit (and, likely, the accusation that they should have never gone into the mastectomy bra market in the first place).

The fit issues that Victoria's Secret already has would no doubt be magnified with the special circumstances of fitting women who've had mastectomies, and if there is any area of bras and bra fitting where women truly deserve a knowledgeable, sensitive, passionate expert, it is in mastectomy bras. And Victoria's Secret can't offer that. A company shouldn't be punished for admitting they can't do it all. In fact, they should be commended.

As mentioned above, Nordstrom does offer a wonderful prosthetic program, but unlike Victoria's Secret, Nordstrom doesn't make their bras. They sell bras from other companies, and they also add pockets to certain styles. It's a completely different way of doing business, and it simply makes no sense to compare them.

In my recent article on pretty mastectomy bras, I mentioned how hard it is to find beautiful, flattering, but still suitable pieces. The vast majority of bra sellers don't make mastectomy bras. And I strongly disagree with the notion that every lingerie company should turn into a Wal-Mart of bras and panties: selling everything in every size in every color to support every need (not just mastectomy, but also first bras, nursing bras, post-surgical bras, etc.). Specialization is a good thing, and it doesn't make sense to expect every single company to appeal to every single customer.

The bumper crop of plus size, full bust, small bust, mastectomy, and nursing bra brands that have popped up lately are a direct result of behemoths like VS choosing to avoid those markets, and the lingerie industry is better for it. Unlike what some fashion blogs say, this isn't an easy issue and Victoria's Secret was in the right. So instead of encouraging this company to completely upened their business model, why not support those companies which are already making beautiful mastectomy bras?

Brands like Royce, Anita, and Amoena need your money and your publicity more than Victoria's Secret ever will. Petition them to make prettier bras. Then petition your local boutiques to carry those bras. Heck, tell Nordstrom to carry them. Because at the end of the day, Victoria's Secret isn't and shouldn't be the answer for every woman.