Private Labeling in the Stockings Industry: An Examination

One of the issues that has really snapped my garter in the past is how so many lingerie retailers repackage (and rename!) stockings from major hosiery manufacturers like Cervin.

Catherine, owner and designer of the much-loved lingerie label Kiss Me Deadly, recently sent me a very explanatory letter on exactly why so many companies do this.

I've copied and pasted her e-mail, with minimal editing, below, and I hope you find it as educational as I did. It really opened my eyes. 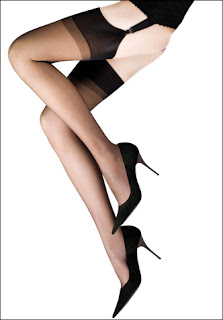 "As you've noticed, Cervin makes a lot of other brands. . .anyone who can afford it, basically. This is called private label manufacturing, and it is not uncommon in the hosiery industry.  Most products you see come from just a few manufacturers. In Cervin's case it's more obvious because they have their own label, and because of the distinctive nature of their products. Another company makes most of the net hosiery for the quality brands, but you would never see their name unless you were in the trade, as they do none of their own branding whatsoever.

The reason they are used by so many is because they are the only reliable and high quality supplier of certain things, like silk and fully fashioned stockings. For certain weaves, they are simply the only people who can do them. Any time you see a name or a logo woven into a stocking top or a tight, for example, that's Cervin. No one else can do it. 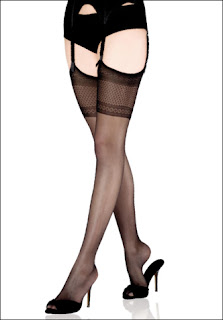 Anyway... as regards the pricing and the repackaging, it's all about money. For starters, the markups (the amount of money you add to a products when selling) are lower in hosiery than in anything else. They've been further lowered by vicious competition from specialist websites run as hobbies, who don’t need to make enough to pay anyone there a living wage.

Re-branding is a way to stop people from comparing prices. It also stops your competitors from knowing where you source your products from, and, believe me, there's always someone trying to copy.

Additionally, if you are having products made specifically for you, as some companies do, the cost per item might go down, but the initial outlay is huge. The minimum order for a catalogue product is 6 pairs. The minimum order for products made to your specifications is several hundred, preferably over a thousand, and in some cases more like 6000. To bring in several ranges in multiple colours and cover the full size range, as the larger companies often do, requires an initial investment that's frankly terrifying if you're as tiny as Kiss Me Deadly

Under those circumstances, this leaves you with a tricky equation—recouping your money as fast as possible (where it generally helps to sell cheaply), but also making sure the outlay was worth it (where you need to make as much money as possible).

On top of that, it's not always obvious what the expensive bits of things are. For example, you mentioned one company that has a lace top version of something Cervin does in their own brand, and the price differential was quite high. That's because, in fact, the lace is ridiculously expensive.

Of all the things Cervin does, the holdups are the most expensive, because they use costly French lace. It's also because the silicone process is quite expensive too. If you check, you'll find hold-ups and lace tops in most brands are the most expensive items, for this very reason...although the value brands buy much, much more inexpensive (and/or much less deep) lace, which significantly reduces prices. Deep lace costs significantly more to make.

Similarly, you might think a contrast foot on an FF wouldn't be too different to a normal one, but, in fact, it requires that the machine be taken offline, filled with different yarn, and then brought back again. So it costs money because of the sheer amount of time involved - both staff time dealing with it, and time lost that could have been spent making catalogue products.

On the other hand making another cosmetic seam leg colour with a black foot/seam/welt is cheap-ish because its the same in griege as the current pink and nude legs. You make the change at the dying stage instead, so its just the dying minimums you have to worry about.

There's also lots of complicated stuff about types of yarn used and exact weaving stuff, which I never have had much of a grip on, but basically you can't always tell from the pictures whether they've done something clever and expensive, or whether its their standard stuff.

Even their standard stuff is pretty pricey though - the Cervin pure nylons use mono filament, which is authentically 50's, whereas the remaining UK nylon manufacturers use multi-filament, stretchier but less vintage and far far more likely to catch and run. The problem is mono is harder to find and more expensive!

So, yes, I'm not sure if this is actually interesting or enlightening for you, but I thought I'd explain for reference purposes really."

Trust me, Catherine, this was an extremely interesting and enlightening article. I not only feel like a better blogger, but also a better stockings consumer for knowing this information.

However, I can't promise it'll stop me from comparing prices...especially since I recognize Cervins by sight! ;-)