The 2015 Oxford Conference of Corsetry fell a scant five weeks before my wedding date. Flying in the face of good sense, I attended anyway. I had other reasons to be in England, and one of them was the undeniable pleasure of spending an extra day with my corsetmaking colleagues, taking pictures in the Sparklewren showroom. Sparklewren, Karolina Laskowska, Vanyanís, Emiah Couture, Holly Rafaela, and Pop Antique (that would be me) each brought corsets and cameras and took it in turns to model and photograph each others' work. 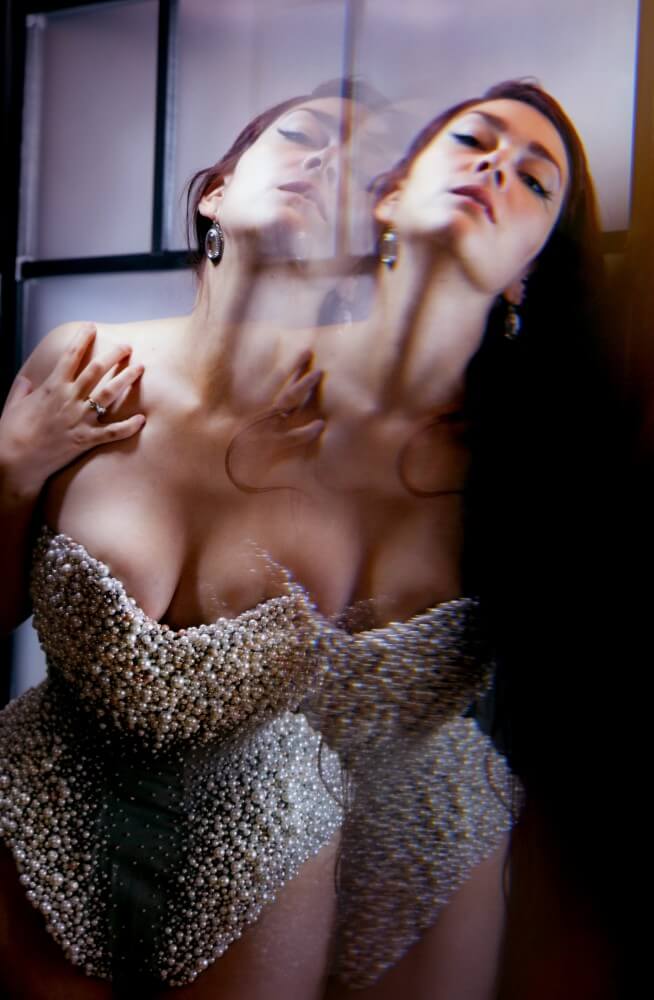 Shown above is Emiah Couture's masterpiece: a pearl-encrusted corset body, affectionately known as "the beast." When I first met Alycia in August of 2014, she was still in the beginning stage of her pearly journey. This corset is fit with built-out curves that dramatize the hourglass by adding volume as well as gently reducing the waist.

What follows herewith is pure eye candy, the results of our kaleidoscoping collaborations. Though none of us are "professional" photographers (and I the only professional model in the bunch), our design backgrounds and years of styling experience give us a strong sense for photographic composition. Creating compelling images is also much easier with such beautiful backdrops as Sparklewren has throughout her studio. The range of corsets you'll see here varies greatly, but the common location creates a thread of cohesion through the photos. Hopefully you'll enjoy looking at them as much as we enjoyed making them! 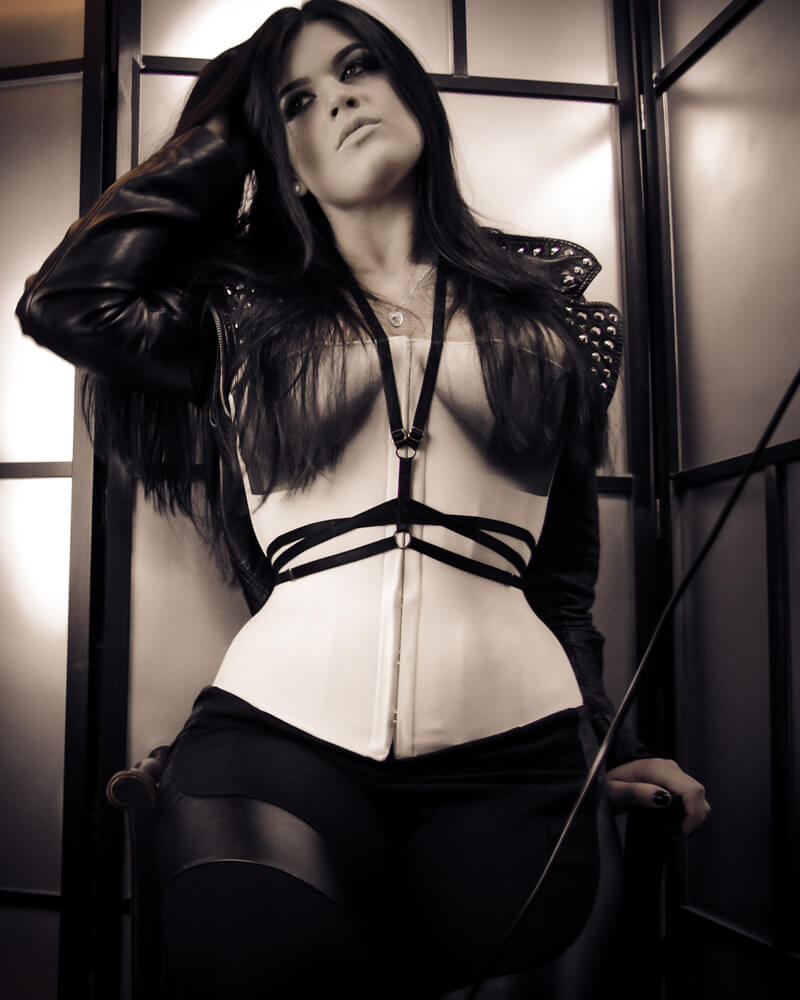 You may recognize the inspiration for the above Pop Antique corset. Vivienne Westwood's iconic "tits" t-shirt, often seen on Siouxsie Sioux, was perfect fodder for one of my signature t-shirt corsets. We took a new photo and had custom fabric printed for this corset, which I originally made for my wife. She let me borrow her faux leather jacket to top off the look when we shot it on Lowana. 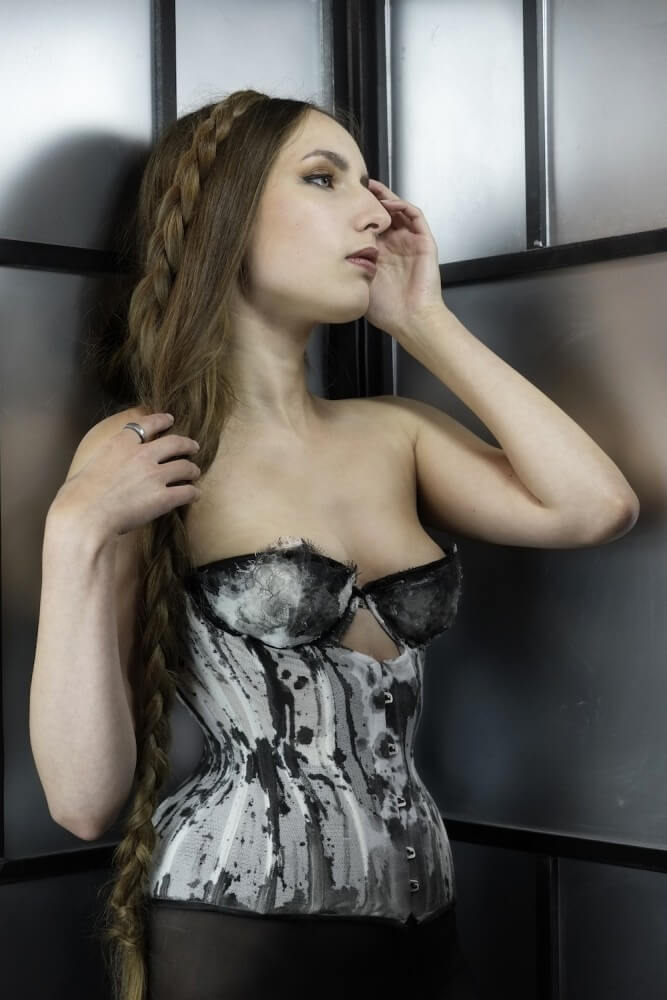 Karolina Laskowska primarily modeled her own work (as well as taking photos). Shown here is a mesh corset with several layers of complexity. The base corset features a multitude of panels and bra-style cups. It's fashioned of bobbinet fabric which has been hand-painted with ink splatters. The cups also have a cloud-like lace appliqué. 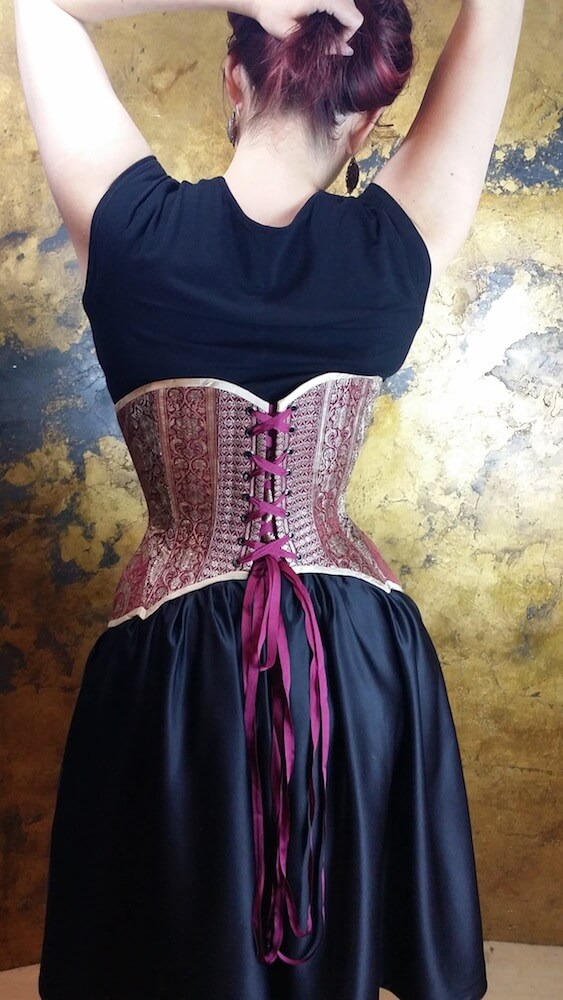 I modeled two Vanyanís corsets, including this "Lady Esha" underbust in beautiful sari silk. This corset was particularly special because one of Lowana's clients was gracious enough to loan it back to her so we could shoot it! I love the beautiful scoop of the bottom edge shaping. 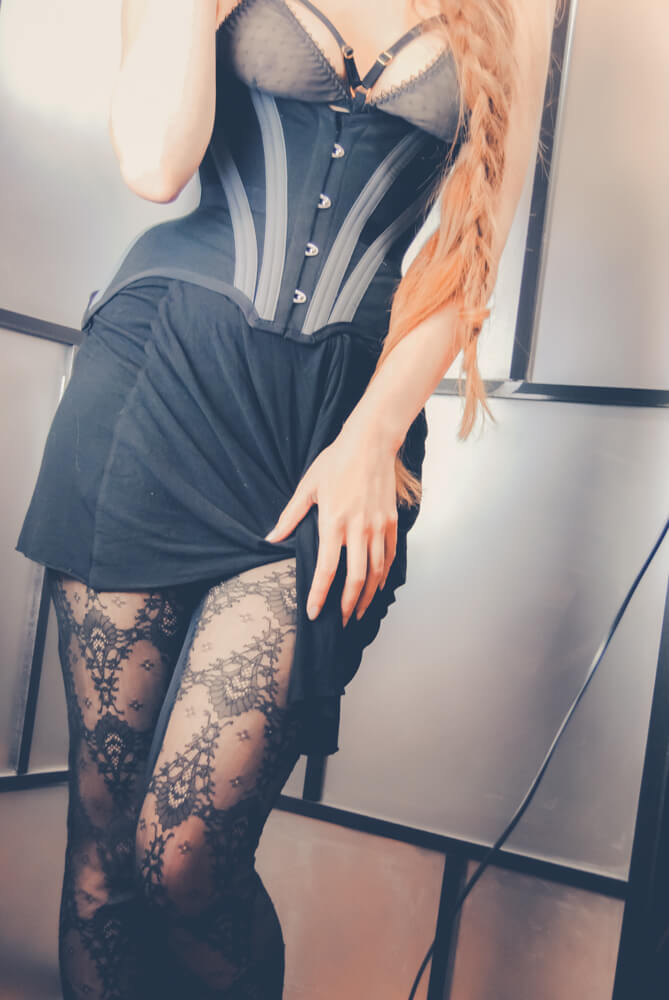 Karolina and I have long since established that, for lingerie purposes, we are essentially body doubles. While this makes for some heated debate over Sparklewren sample sales, it's a boon for us when she wants a Pop Antique corset. I can use my personal bespoke patterns to create corsets that fit as if they were made just for her. Since Karolina didn't have a plain black corset, I made her a Gibson Girl (in the original hemp/organic cotton herringbone) with the style lines set off by "light black" bone casings. 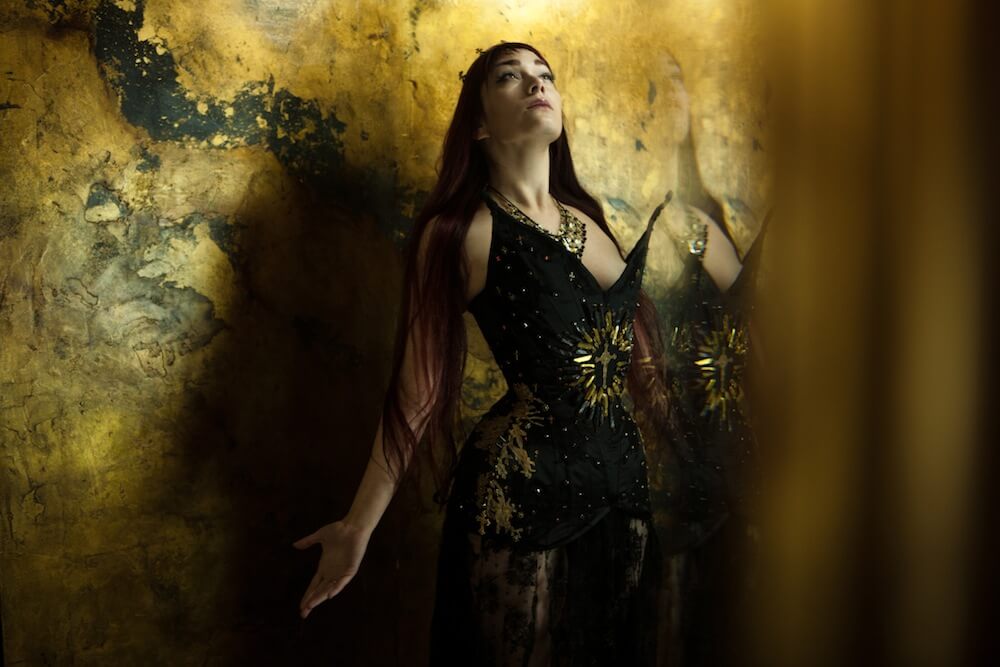 I had the privilege of modeling a couple showpieces which were originally shot at this year's Oxford Conference of Corsetry. Holly Rafaela drew strongly from the dark, ornate style of Catholic trappings in deciding the lines and embellishment for this corset. I think Karolina's photo has perfectly captured the feeling of heavenly ascension! 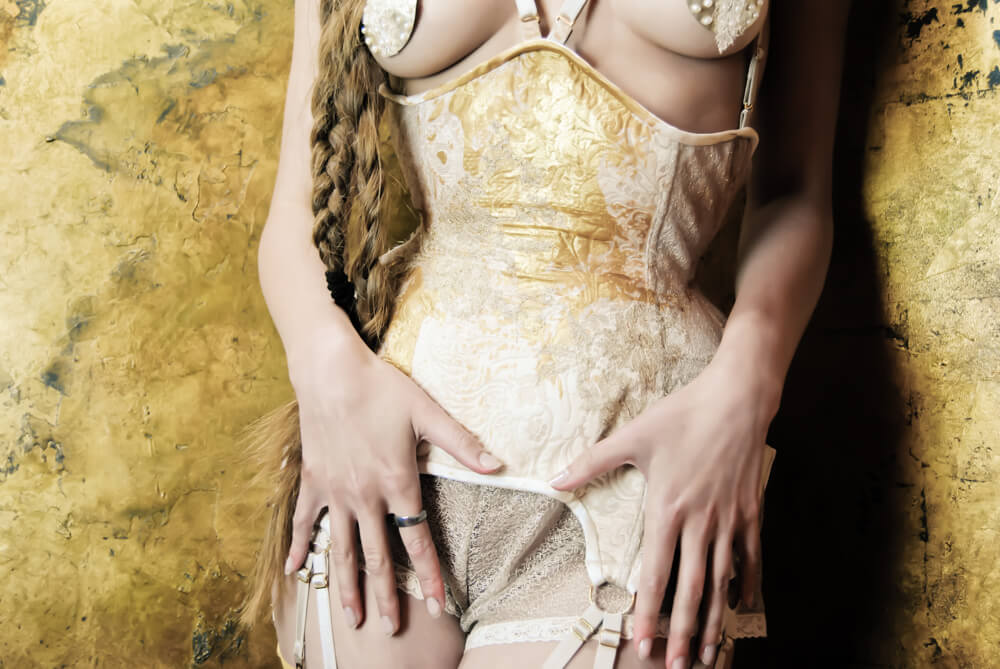 Perhaps no ensemble was as well suited to our golden backdrop as Karolina's gold and ivory corset set. Again Karolina has hand-painted the base textile and merged traditional lingerie construction and design into her corsetry. 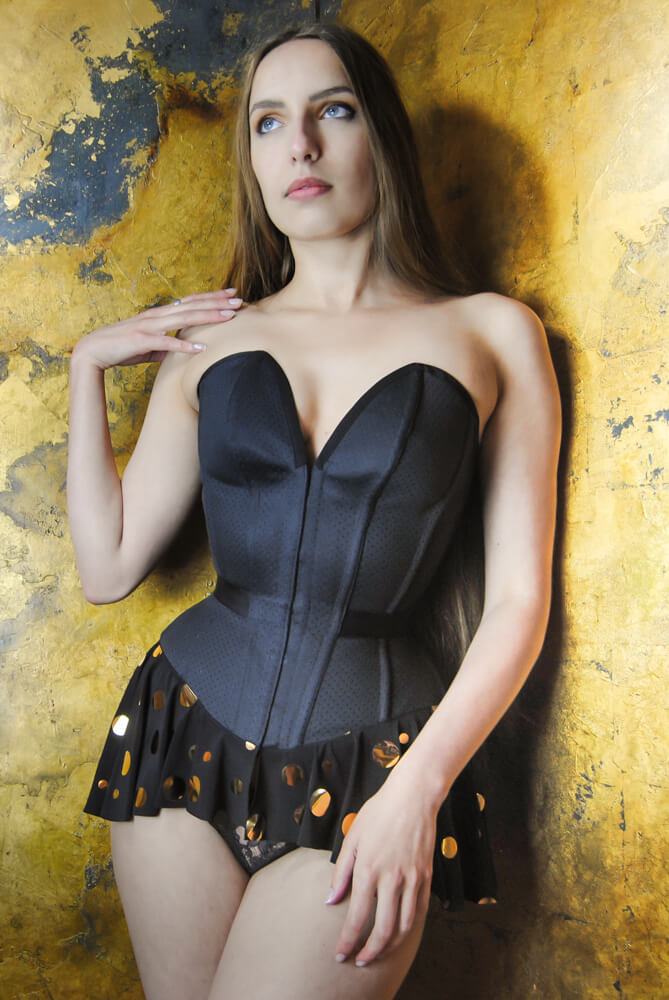 Our energy reserves were running low by the time I laced Karolina into her other new Pop Antique corset. That didn't stop her from shimmying a bit to make the double-circle peplum sway, though. This plunge corset is once again based on one of my personal bespoke patterns. Its single-layer construction has an external waist tape, as is my preference, and an inside-out busk to create a bodice-like eveningwear look. 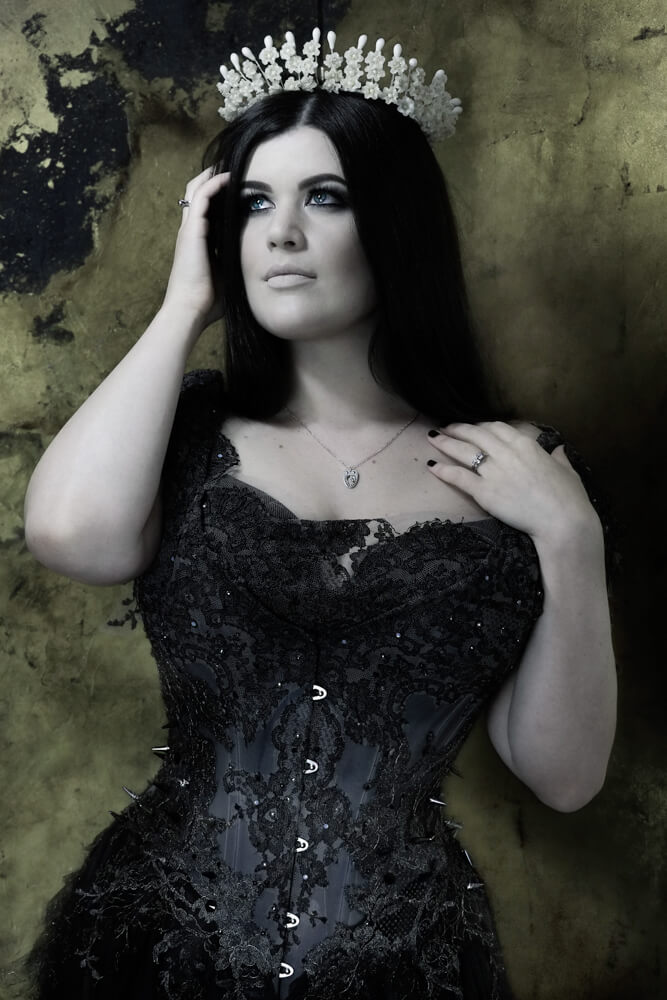 Karolina Laskowska found Lowana to be a perfect model for her "Gothic Princess" corset. The layers of embellishment are beautifully layered and textural. Spikes, silk tulle, and metallic lace play in a subtle oil slick color palette. If you love this piece, Karolina has detailed its story on her blog, Knickerbocker Stories. 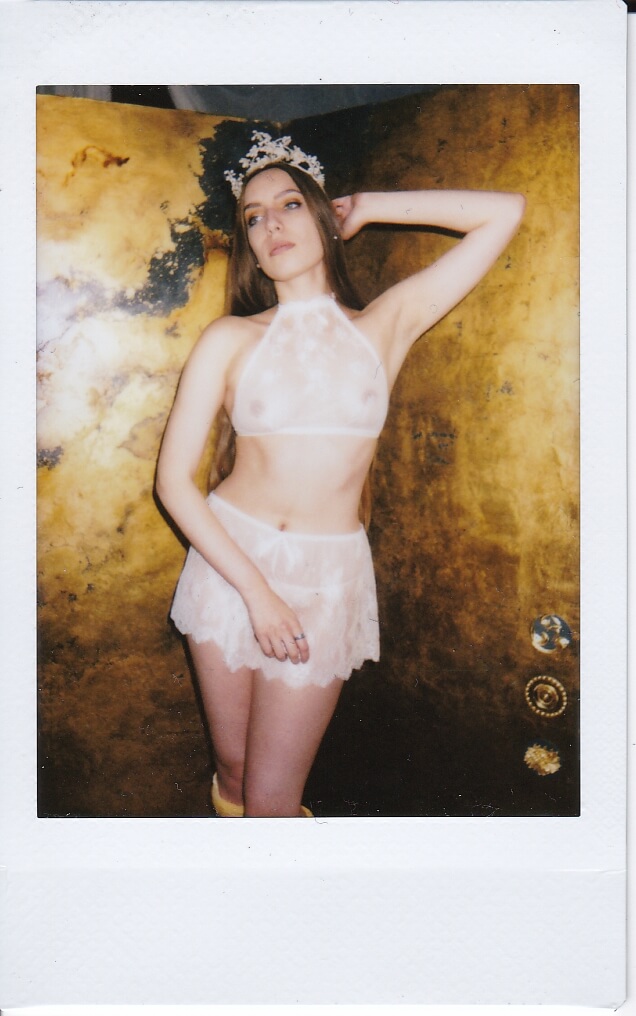 Of course, we shot a lot more that day, including several captivating Polaroids, and a . To see the rest of our photos, you'll just have to keep reading The Lingerie Addict. Other images will be sprinkled throughout Karolina's and my upcoming articles.

Which photo from our play day is your favorite?