This week, the Internet was graced with two stunning images of trans woman transparency. Last Wednesday, Laverne Cox shared a picture of herself in a black mesh swimsuit, sans makeup, and on Monday, Caitlyn Jenner (formerly Bruce) revealed her Vanity Fair cover photo, featuring the retired Olympic athlete in all white lingerie. These images are beautiful, and inspirational, and represent years of work, and pain, and progress. But these images also reveal some things about how American culture expects a level of disclosure from women that we don't expect from men, and how trans women are held to an even higher standard. 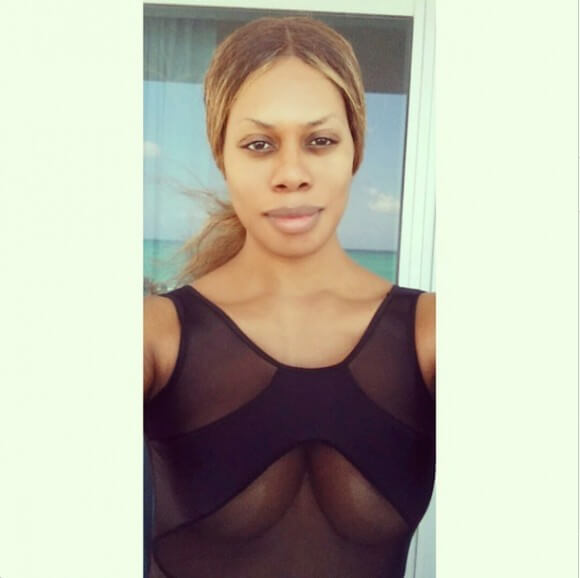 Let's start with the Caitlyn Jenner photo shoot. For some context: Caitlyn Jenner came out as trans in late April. After a brief but intense media storm, Caitlyn has appeared in an exclusive Vanity Fair interview to discuss her transition and her feelings about her past. The accompanying cover photo shows Jenner in streamlined white lingerie, her arms tucked demurely behind her back, a pose of total openness. The article itself focuses on how Caitlyn’s life prior to transition was characterized by lying: to herself, to her significant others, to her children, to the public. Caitlyn “doesn’t have any lies,” she says.

But the imagery says something else. Caitlyn is expressing her truth, but she's expressing it in a way that is carefully curated for public consumption. This doesn't seem to me like an accident. Caitlyn has been part of the Kardashian family since 1991: a family who knows how powerful, and profitable, feminine disclosure can be. This photo shoot is curated to show a stark contrast between the bad, lying Bruce Jenner and the honest, forthright Caitlyn. Her lingerie is white: the color of rebirths, virgin brides, initiates into secret orders.

This image is intended to banish other images: the shots of masculine-presenting Caitlyn as an Olympian, the images that America loved, that kept her tied to a self she couldn't stand. This image is intended to demonstrate Caitlyn's "viability" as a woman, because she's passing and she's beautiful. This image, shot by famously ambiguously-queer photographer-of-women Annie Leibovitz, is a masterful performance of gender and celebrity, packaged as naked truth. Caitlyn herself says in this video: "If you're going to come out... you really have to look the part, you have to look very feminine."

This is not to say that Caitlyn is lying. This is to say that Caitlyn is coming out into a society that is ready to accept some trans women: the ones who pass, the ones who are conventionally pretty, the ones who can afford the wardrobe, the makeup, the facial reconstruction. And she's also coming out into a society that demands a high level of disclosure from trans women about the size of their breasts, what their genital configuration is, what they've "had done," when they knew, why they waited. The Vanity Fair piece mentions Caitlyn Jenner relating to Monica Lewinsky's TED talk about public perception. Caitlyn is choosing to come out with as much armor as she can; that armor, perversely, means creating the illusion of nakedness. Of vulnerability. Because that's what a good woman is, right?

If the images we'd seen of Caitlyn on the news in April, of a sorta-butch person who identified as a woman but still answered to Bruce and wore a button-down and no makeup --- if that was, in fact, Caitlyn Jenner's unadulterated truth --- would people be as riveted by her? The trans woman double bind is often that, as better women than I have said, "If you present in a traditionally feminine way, you’re just being a misogynistic parody of a woman, and if you fail to present in a traditionally feminine way, well ha! There’s the proof that you’re not really a woman right there."

Which brings me back to Laverne Cox.

I don't know if this is my imagination, but it seems to me that she is doing something very radical. When I see her in the media, Laverne Cox is definitely creating a public performance, but hers is not all about openness. Instead, she's selective with what she's open about, and acknowledges that. Laverne Cox might pose in a swimsuit that's basically black censor bars set into mesh, but she refuses to discuss the details of her surgeries on television, because that, for her, is a boundary. Laverne Cox takes selfies without makeup, but also discusses makeup as a part of her job and her typical public face. Laverne Cox talks how "in certain lighting, at certain angles I am able to embody certain cisnormative beauty standards" because she wants people to acknowledge that photographs aren't representative of a whole person. 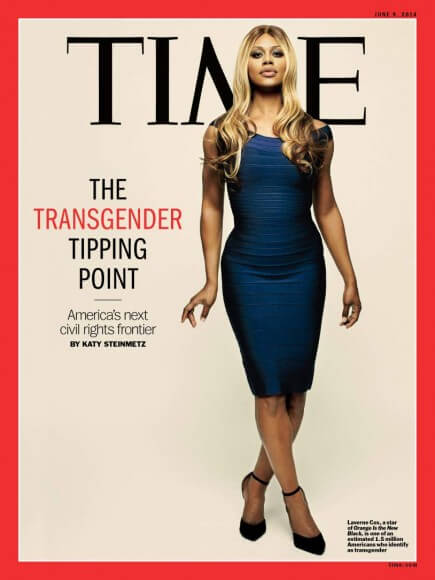 Laverne Cox's Time Magazine cover. Cox says that she doesn't want to just be known as a pretty woman. Via Time.

Laverne Cox isn't trying to be someone's perfect trans woman, a pinnacle of disclosure and openness and nudity. She seems more interested in getting into discussions about what people mean when they talk about beauty and openness. But that's a conversation that might be hard for Caitlyn Jenner to have right at this moment, when she's finally able to present the way she wants after a lifetime of waiting.

The original ABC article mentions that Caitlyn Jenner has been talking to Laverne Cox, and that she'd like to be a larger part of trans advocacy, citing Cox, Janet Mock, and Carmen Carrera as her inspirations. "They made it easier for me," she said in a video released by Vanity Fair. "I hope with my honesty, I can make it easier for someone down the line." I think it's such a good thing that Caitlyn is taking her lessons from these women, who are not just trans women celebrities, but advocates and theorists too. I have a hard time imagining better teachers.

I imagine that as time goes on, Caitlyn Jenner's presentation and level of openness will shift around. She may or may not want more photo shoots in lingerie. She may or may not feel comfortable sharing the details of future surgeries, or decisions not to get them. If it turns out that Caitlyn Jenner's ideal life is a state of total openness and overt femininity, then she should have that. But if not, I hope that people can be okay with the idea that trans women, celebrities or no, don't have to embody feminine ideals in order to count.