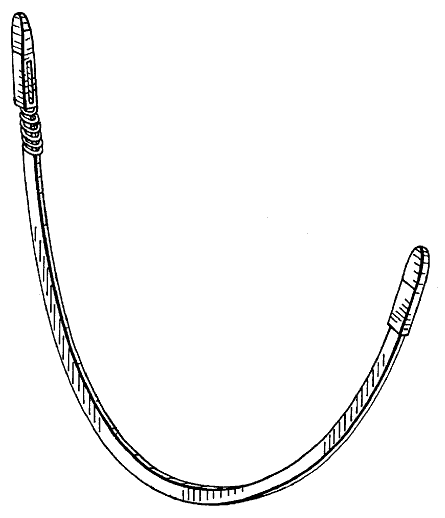 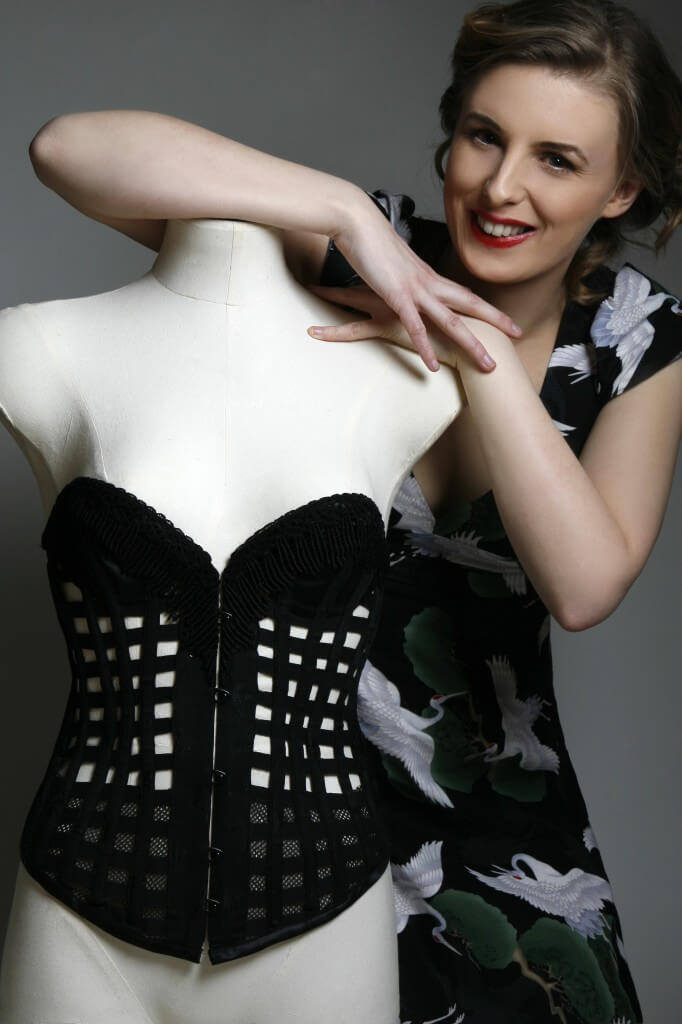 Most modern bras are underwired, but how much do you know about them? Why are underwires in our bras? What are the different shapes and types of underwires, and what does each one do? And what do you need to look for when buying an underwired bra... or even when making one?

In 1931, Helen Pons patented a U-shaped wire to be worn flat against the chest wall, a very similar design to the underwires we know today. Though U-shaped wires and even O-shaped wired (which means the wire went all the way around the breast!) bras were developed, soft triangle bras, slips, and camisoles remained more popular during the 1930s and 40s, with underwired bra only taking off in the 1950s. Even then, many bras had overwires instead, which provided no shaping or support, just a fashionable silhouette. 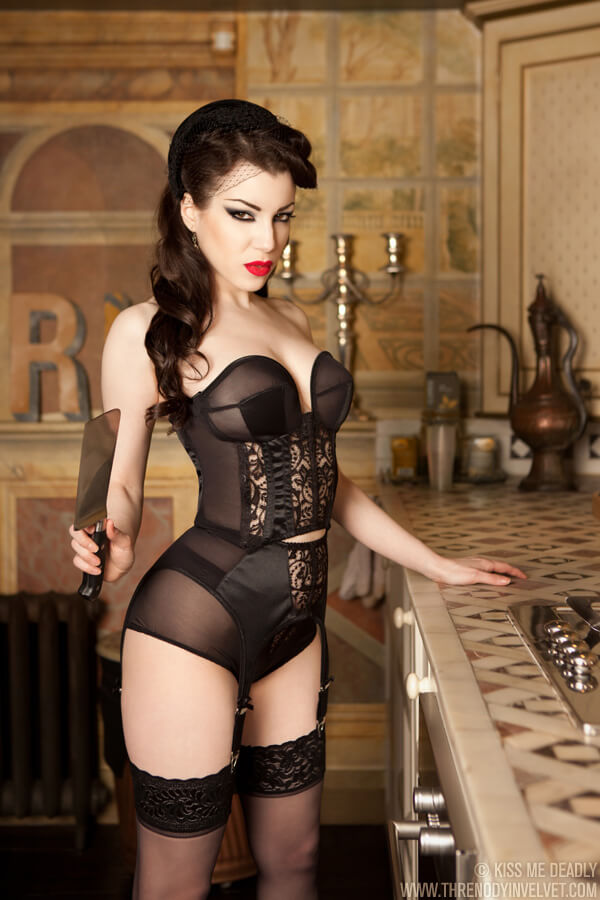 An underwire is an artificial, idealised, regularised form of the breast root. The root of the breast is where the breast joins the body. In my days as a Contour fashion student, we all got very hands on with this, drawing around our breasts with medical markers, green eyeliner pens and anything else non-toxic we had on hand! Then we would take measurements, photos, and draw breast root traces with a flexicurve. It may sound ridiculous, but the point is to study and understand how the natural breast root shape looks and how underwires affect it.

Natural breast root shapes vary greatly even for breasts that are in the right bra size, so if you are struggling to get a good bra fit, taking a breast root trace can be helpful with comparing wire shapes to your body, so you can decide which bra has a more sympathetic fit for you. 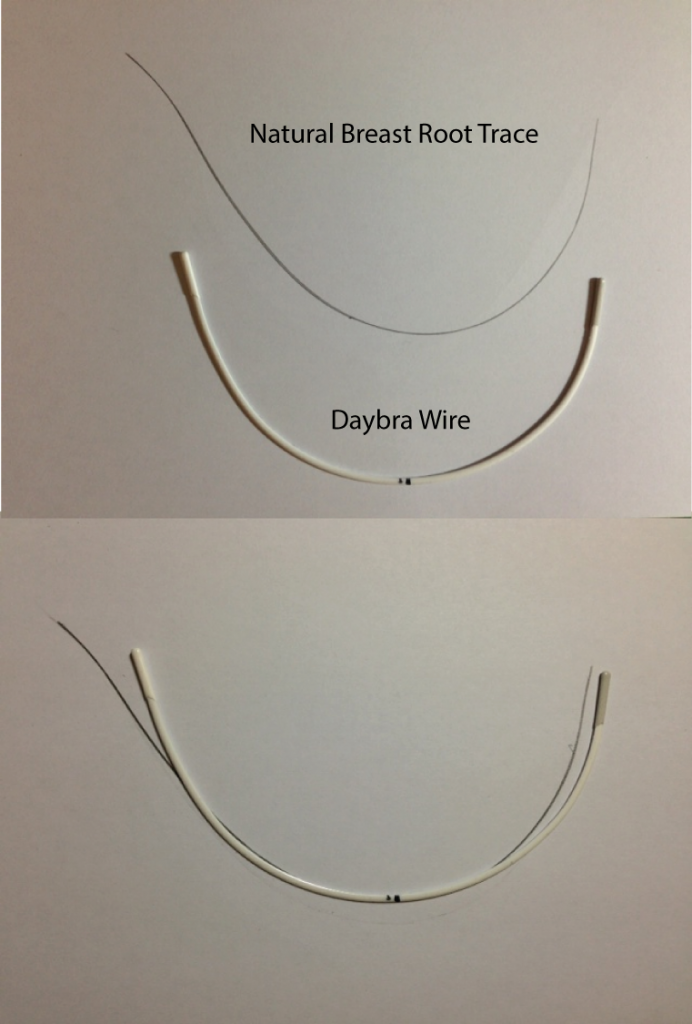 The difference between a natural breast root and same sized underwire.

Underwires are narrower than our breasts, but once put into a bra, the fabric sides of the bra pull them out. The sides and the cup of a bra form a cantilever which lifts the breast upwards from the base – which is why you shouldn’t need the straps of your bra for much support!

Most women have one breast larger than the other, but wires, of course, are identical, providing a more symmetrical base. The main function of the underwire is to push the breast into a certain shape, a bit like putting playdough through a mould! The breast is contained inside the wire outline and the breast volume pushed into in a chosen direction to give a certain appearance or fashion shape for the specific type of bra. Wires provide support in combination with the cradle and cup of the bra. Different wire types are intended to provide different shapes.

Underwires can be plastic or metal. Plastic has a tendency to snap and so is generally only used in cheap mass-produced underwear, or in swimwear to avoid rusting. The majority of underwires are carbonised steel with an outer coating of nylon and an extra coating on the ends.

The 3 Main Types of Underwires:

There are surprisingly few key types of underwire shape, but many subtle variations are found within each type. The main ones are: 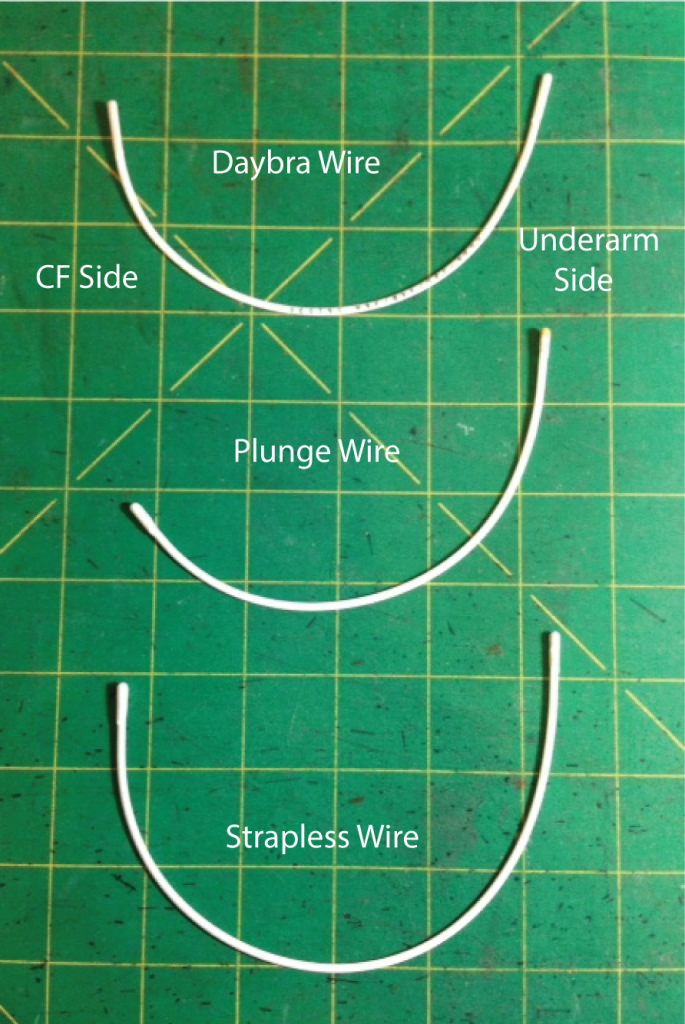 Balconette/Day bra
This is a J-shaped wire intended for all day wear without any especial fashion aspects. In training, we call this a Daybra. That’s just a bit of industry shorthand for a daily wear bra, not a brand or term most people would  know! A Daybra wire is shorter in length than the other wire types, and so has a greater difference between the height of its two ends. They are used for balcony and balconette bras and fuller cup/everyday bras, respectively, and are a shape quite sympathetic to many women’s natural breast root.

Plunge
Also known as a ‘rocker’ wire, these are banana shaped. Some are slightly more hooked at the centre front end and others are just like the curve of a banana. These wires are put into the bra at a sharp tilt and are primarily used in push-up/plunge and infrequently in demi and very low balconette bras. They are designed to push the breast upwards and towards the centre front, giving more prominent cleavage and deeper neckline.

Strapless
These are a deep U-shape wire, and are nearly the same height at the side and centre front ends. The principle here is that the breast falls into the deep U, where it will be contained completely, supported from underneath, and projected forwards. A strapless bra needs to grip, contain, and constrain the breast more in order to both provide support and stay in place. For a smaller cup size range, I occasionally select a balconette wire if it suits the style required better.

A note for D+ Cups
Nowadays, a good bra wire will tend to be oval in cross section as this is more comfortable. D+ cup bras tend to use a sturdier wire construction with a deeper, flatter cross-section for added strength and rigidity. Some full bust brands also prefer a U shaped wire generally, as larger busts tend to be rounder.

Less Common Wires
Some other types of wire you may see are: 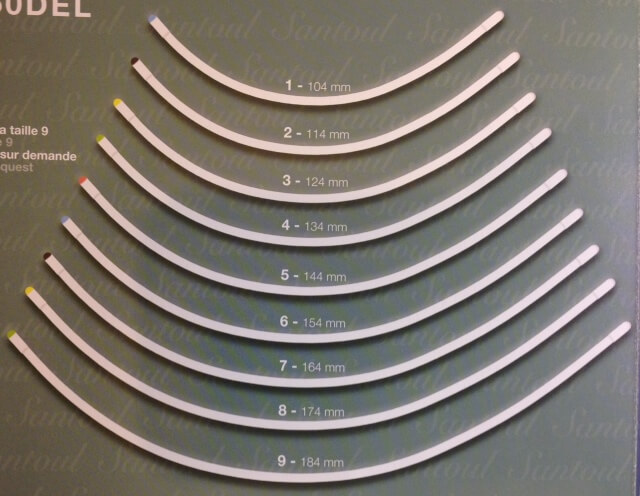 • Shallow demi wire – used in triangle cup bras, which are a cross between a soft and an underwired bra. 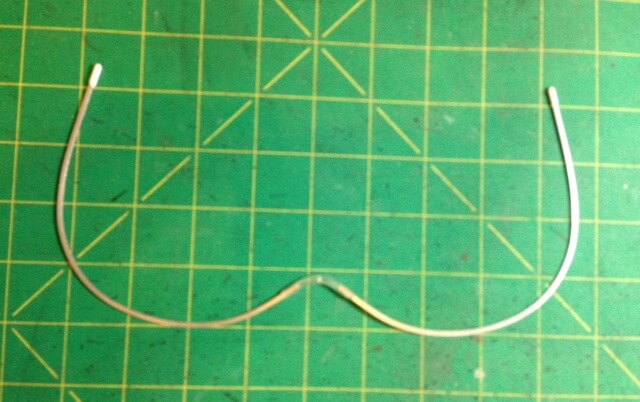 • Mono underwire (aka Domino wire) – can be fully rigid or have a flexible silicone joint. These are to provide a look rather than practical benefit – they are difficult to pattern cut for! 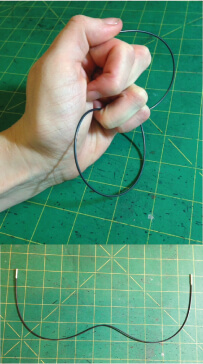 • Titanium memorywire – this tends to have a round cross section and has the advantage of being able to move in all directions with the body. They also can be squished up and ping back into shape (see above) which is pretty cool! 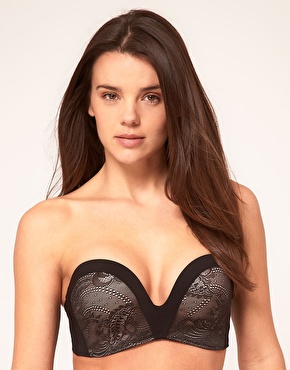 • Wonderbra plastic ‘hand tech’ support – created by and unique to Wonderbra, they developed a plastic support that looks a little like splayed hands which with a wide elastic underband works like an underwire, hidden inside the bra. 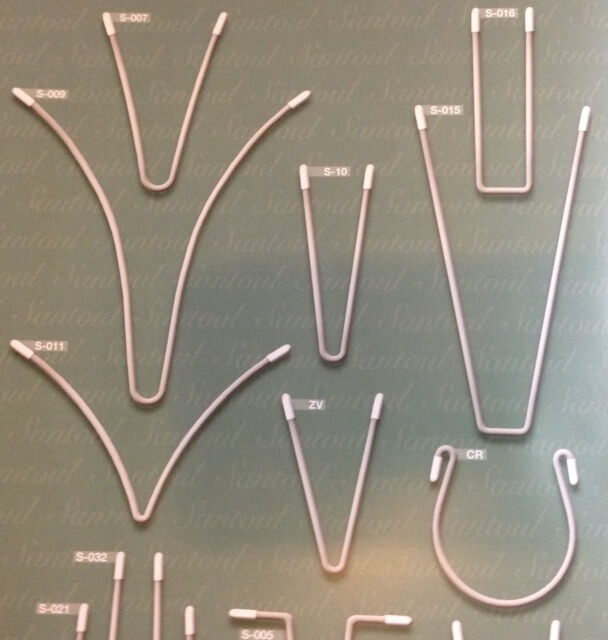 • Overwires and separators – these are used to create a certain look and do not really have a technical function, though their use can affect bra fit. Overwires go above the bust, separators (see below) go in between them as a design feature.

• 3D wires – one flaw in most modern wires is that they are two-dimensional – curved in one direction only, which is why I can lie them flat to photograph. But as you may have noticed, your body has both the curve under your breast and the curve of your ribcage! Some research is being done to create a 3D underwire as, in theory, it should be more comfortable to wear (though the curved shaping idea was in use in both 1950s overwires and vintage French mono underwires).

Wire-related Tips for Choosing a Bra:

Do you have any more questions about underwires? Please leave them in the comments, and I'll try to answer!