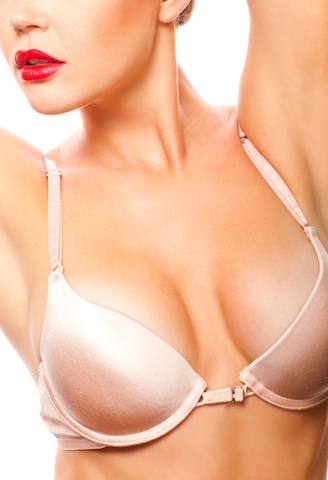 A few weeks ago, while I was on vacation, a controversial new study out of France took over the internet. After 15 years of studying 320 women, French scientist Jean-Denis Rouillon found that wearing a bra actually makes women's breasts saggier, a condition known medically as ptosis.

Bras and breasts are always two popular topics; whenever new research comes out about either, it inevitably makes it into the news in the news. But what was most interesting to me about this particular bit of research is what it revealed about the way we discuss about bras and breasts in our society. And some of that conversation is a little disconcerting.

What Does Previous Research on Bras and Sagging Breasts Say?

One of the reasons Rouillon's research elicited so many strong reactions is because his findings directly conflict with what the lingerie industry has been saying for years. No matter what your local lingerie boutique tells you, wearing a bra does not prevent sagging breasts. All breasts sag eventually; it's what they do. You can wear a bra 24/7 from puberty onwards, and the odds are still overwhelmingly in favor of sagging.

What many people don't know is that Rouillon's findings on bras and sagging breasts actually agree with a couple of rarely discussed academic papers on the subject. A 1990 study from Otsuma Women's University also found that wearing a bra contributes to sagging breasts, and a 2003 study by French researcher Laetitia Pierrot also found a reduction in sagging breasts after going without a bra for one year.  Despite decades of research on the subject, no study has yet found that bras prevent breast sagging. So my immediate reaction when I heard of Rouillon's research was, "Oh, okay. This lines up with what has been published before."

[As a quick aside, because it inevitably comes up when people are discussing the importance of bras, none of these studies are about athletic activity and sports bras. They are all about bras for everyday wear.]

Admittedly, all three of these studies have some major flaws. Rouillon's biggest one is pretty obvious: a lack of peer review. Because his findings have not yet been published in an academic journal, good judgment demands that we interpret his study results with caution. In addition, the other two studies, while published, have the pretty significant flaws of a small sample size, lack of racial/ethnic diversity, lack of age diversity, and lack of size diversity. And those are just the obvious issues. Unfortunately, these problems are common to every study on bras and breasts I've run across, including those studies the lingerie industry chooses to cite frequently.

I'm not really invested in the bra question one way or another. I believe if you wanna wear a bra, great and if you don't wanna wear a bra, still great. But I am not okay with how the lingerie industry dismisses some studies as invalid for not being rigorous enough, yet embraces other studies without comment, even when those other studies have the exact same issues. If small, homogenous samples are an issue in bra and breast research, they are always an issue. They don't suddenly become more of an issue when you hate a study and less of an issue when you like it.

One last note on sagging breasts... there's some good research out there on the causes. Breast ptosis appears to be correlated to factors like age, weight loss, breast size, number of pregnancies, and smoking. Again, there's no mention of the wearing or not wearing of bras. And I'm just thinking out loud here, but if bras actually prevented sagging breasts, don't you think the breast lift would be obsolete? After all, most women in Western countries have worn bras every day since puberty. And it could just be the cynic in me talking, but when bras are pitched as magical 'cure-alls' for something as unavoidable as sagging, I can't help but think, "You're trying to sell me something, aren't you?"

This next issue is one that really gets under my skin. I am sick and tired of the lingerie community resorting to examples of anonymous, bare-chested, tribal women to make a point that going without bras will somehow "ruin" your body.

Not only is that kind of commentary ethnocentric in the extreme ("Hello!!! There are more ways of being beautiful than the Western way!"), I hate the notion of using someone's ethnicity and culture as some kind of lazy prop to make ill-conceived points about superiority. And yes, it's totally body snark.

Moreover, when we pretend that sagging breasts are attributable to anything other than the factors mentioned above, we do women a disservice. Sagging breasts aren't something that happen because you're "irresponsible" and went too long without wearing a bra. They're something that happens as a side effect of being alive and carrying life. Some women's breasts sag when they're 18. Some women's breasts sag when they get pregnant for the first time. Some women's breasts sag when they become senior citizens. But ptosis (there's that word again!) is a natural part of life, and there is no miracle bra, cream, or contraption (short of surgery) that will change that. Let's stop setting women up for failure with unrealistic expectations.  Sagging is okay. More than okay, it's perfectly normal.

There are tons of great reasons to wear a bra anyway.

I'm pro-boobs, and I think they're beautiful and awesome and fantastic no matter their size or shape or age or whatever. I understand there are social reasons for wearing a bra (OMG...nipples!!!), and I understand that many women just feel more comfortable and confident with one, no matter their size. For me, I just like the way they look; lace on my boobs is pretty. And let's be clear... those are all sufficient reasons in and of themselves for wearing a bra.

What I don't like, however, is when the lingerie industry actively trades in falsehoods in order to sell more product. I hate that I only learned just a few years ago that bras don't prevent sagging. I hate that I didn't see any judgment-free, normalized images of breasts until I was in my mid-twenties. I hate that there are young girls growing up right now who believe their brand new breasts are deficient and defective because they're not naturally shaped the way they are in a t-shirt bra.

We should have a conversation about bras and breasts and all the reasons why we wear them and if they're doing the things the lingerie experts say they do. Those are all excellent and wonderful conversations to have. But let's start from a place of truth, honesty, and realness. Your breasts don't need to be full, uplifted, perky pears to be "perfect." Breasts come in all shapes and sizes, and they're all fine just the way they are.

What did you think of Rouillon's study? Did it affect the way you see bras? I'd love to get some other thoughts in the comments.