Charles Wallace is a PhD student studying insect systematics, as well as a writer, podcaster (@ASABpod), macro photographer, and amateur aerialist. He lives in the metro Phoenix area with his two cats.

This is Part II in a two-part series on packing. Part I covered what is packing, types of packers, how to choose a packer, and how to care for them.

Once you’ve got a packer, you need something to hold it secure. The easiest and cheapest option is to wear a snug-fitting pair of briefs or trunks and place a lightweight packer into the fly. This option is most effective when you aren’t moving around much, or where there’s an additional snug layer to keep things in place (e.g. if you were to wear leggings).

Beyond that, there are three primary options: a harness, a detachable pouch, and underwear with a built-in pocket.

Choosing Between the Three

A harness offers minimal coverage and is the best option if you want to wear looser underwear or no underwear at all. Harnesses work with realistic packers, and can offer a very secure placement (good for sports or swimming). The biggest variety is available from TranZwear. 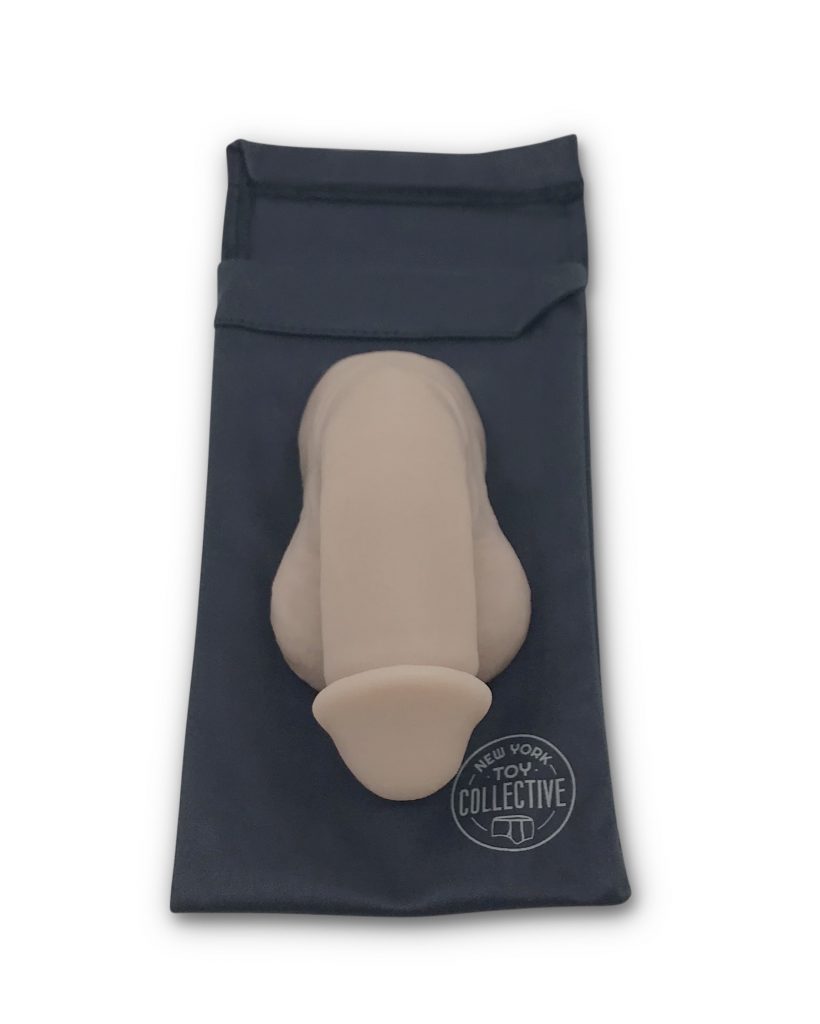 A detachable pouch relies on the thick, sturdy elastic waistband typical of most men’s underwear. Shaped like a pillowcase (rectangular, with an open end), you place a packer within the pouch, and secure it to your waistband. Most options use large safety pins, but the New York Toy Collective sells one which closes with strong magnets.

The previous two options are best if you want to stick with your own underwear, but there are a variety of pairs which are made specifically to hold a packer. Packing underwear typically has a pocket in the front, which, unlike a fly, has a single horizontal opening at the top. These are meant to fit snugly, and thereby hold the packer in place. Different options (in a variety of cuts) are available from many of the retailers at the bottom of this article.

A note on sizing: Popular options Jockmail and RodeoH both notoriously run small. For larger sizes, “Cake Bandit” from TransGuySupply and the “Pete” line from SpareParts go up to a 50” waist.

Anecdotally, a lot of trans people avoid swimming because it can feel like a dicey proposition. Bathing suits are typically skintight, and even more so after getting wet. Whereas it’s not unusual for the front of your pants to be flattish, that’s less the case with swimsuits – increasingly less so as they get smaller and tighter. 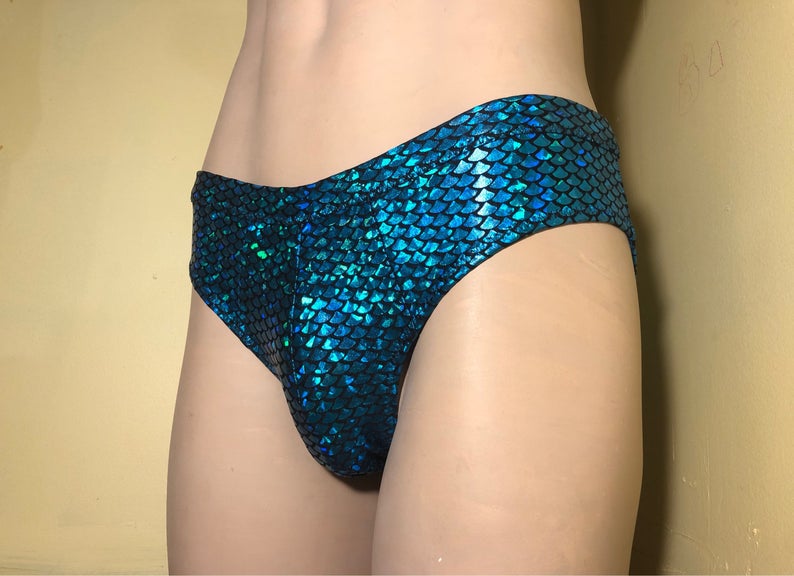 Packing while swimming may help restore some confidence, if not relieve dysphoria. Even more than with everyday wear, packing for swimming requires a packer which won’t absorb water (e.g. a silicone option vs. a foam insert), and something to hold it in place despite rigorous movement. The best option for most men’s swimwear is likely a secure harness worn beneath trunks or board shorts.

In addition to previous tips on keeping a packer in place, there are several options for jock straps modified to hold a realistic packer. Several seem more fashionable than functional (e.g. TG Supply’s “Cake Bandit” jocks), but rodeoH offers a black sport jock with construction to hold a packer securely.

As mentioned in Part I, an STP (“stand-to-pee”) is a device which allows people without a penis to pee standing up with some control. Increasingly, these are made for and marketed towards people looking to have a realistic penis. Some of the earlier options, e.g. the “Go Girl,” are abstract and obviously marketed to cis women. 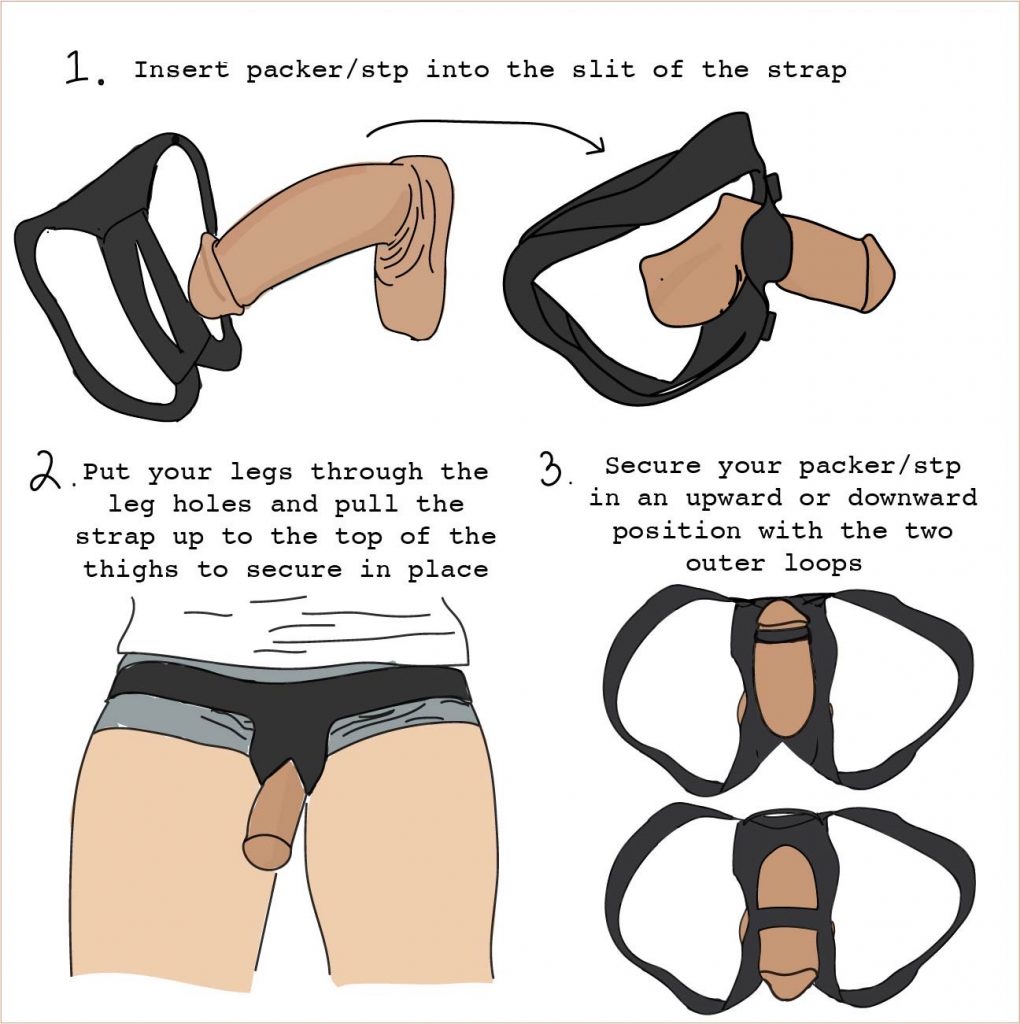 Instructions for how to use New York Toy Collective's STP Strap 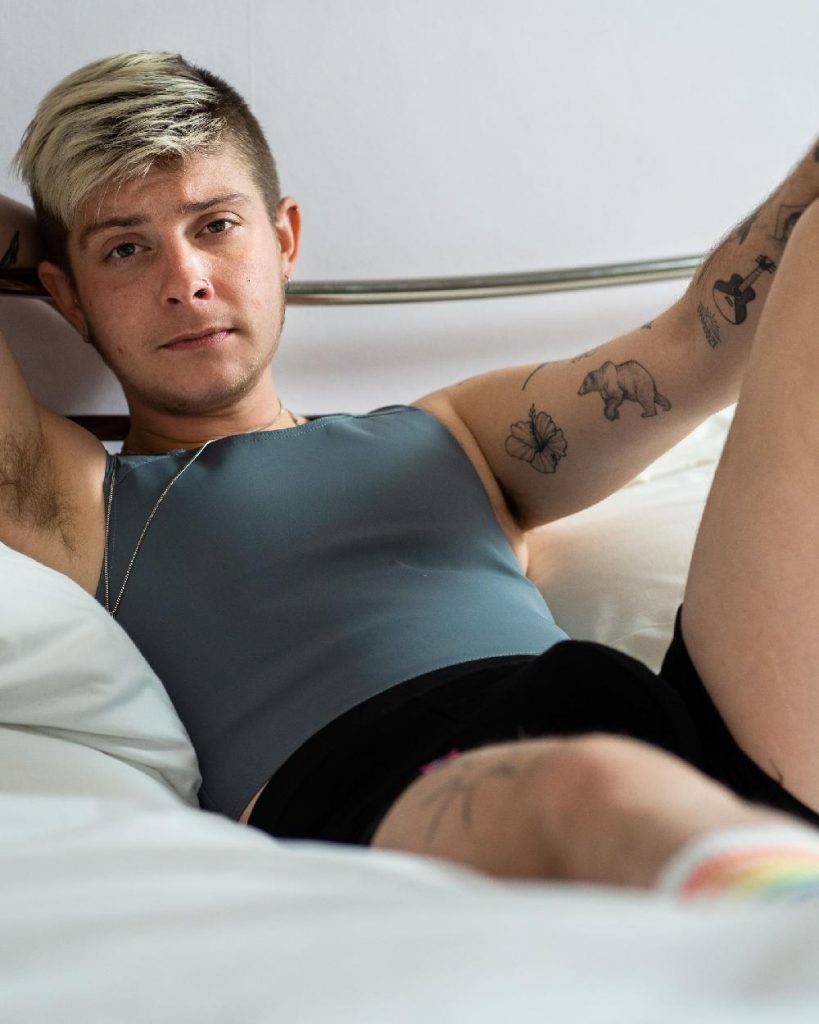 Depending on the products used, menstruation may or may not conflict with packing. Underwear designed for men typically don’t accommodate liners or pads very well, but UK company Spectrum Outfitters offers “3 in 1” boxers with a built-in brief and a discrete packer pocket.

Where to Buy Packing Underwear

All of these stores offer domestic (USA) and at least partial international shipping. One, Spectrum Outfitters, is UK-based, and offers shipping internationally. Most are also trans owned and run.

Many packers and packing underwear can also be found at sex toy shops, in their “gender expression”/ “gender gear” sections (nsfw).

Ultimately, whether and how you pack depends on a lot of factors, and there are now more options than ever to serve them. Hopefully, these two articles have given you a strong foundation in what’s available, and there is an ever increasingly robust community of people online (such as r/ftm) who can give you even more personal testimonies, tips, and in-depth reviews.